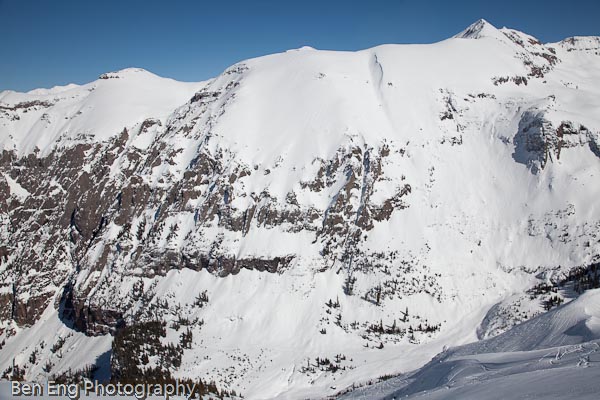 Telluride is often overshadowed by its neighbor Silverton a few miles away (as the crow flies) when it it comes to the public perception of the gnar. However, they are both in the same mountain range with similar terrain and vertical, and access to the goods from the lift through the backcountry gate is easier than in Silverton. But unlike Silverton, there is no avalanche mitigation work. The access is always open at your own risk. And in March, every jack-ass with a beacon thinks that because its spring the backcountry is ‘magically safe’ and proceeds to track it up with jump-turns and slide-slips, which means you gotta bust out the touring gear and push out further. The above photo is Wasatch mountain as viewed from the ski area, with our planned route labeled.

Paul Goodman trekking out from the ski area on his ski blades. I mean ascent skis.

Looking at Wasatch Peak. Tempting, but someone else beat us to it.

Paul Goodman surfing the wave. That face in the background is Upper Bear Creek and is accessible within about 5 minutes from the ski area, and it ain’t no joke. Tread lightly.

Our tracks in the wave

The Hairy Banana. After cutting the top our scout called it off. Too much spring hot-pow.