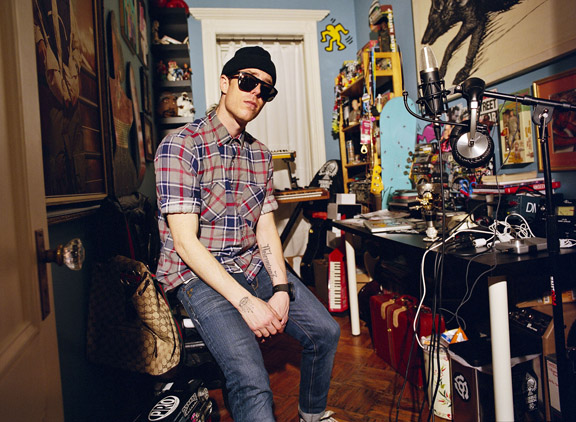 When speaking with Trevor “Trouble” Andrew, sentences end abruptly, new ones begin, apex, switch gears entirely, then taper off. But the wandering thoughts are held together by a force more powerful than linguistic cohesion: creative passion. The restless energy that led the former pro and Olympic athlete to turn injury downtime into a musical career is the same force that allows Andrew to manage his many obligations—performing across the country, running his label, working with a variety of brands and trying to find time to shred between it all— not as competing tasks, but as all part of the artistic process of Trouble Andrew.

In 2004 Andrew followed a serious knee injury with six broken ribs and a cracked vertebra. The time away from snowboarding prompted Andrew to develop his music, then little more than a hobby, into his primary creative output. Drawing on a diverse range of influences including Johnny Cash, Ice Cube, Black Flag and The Beach Boys, Andrew’s music combines hints of hip-hop and punk rock, a tangible reflection of how thoroughly the genres have helped shape the snowboard and skateboard communities in the past few decades.

On his new album “Dreams of a Troubled Man”, Andrew mixes scenes of the rock ‘n’ roll lifestyle with commentary on the American celebrity culture, laying the concoction over retro-inspired, synth and bass driven grooves. The coexistence of contrary elements is the essence of Trouble Andrew. Songs like “New Kid” and “Reporters” get their catchy melodies stuck in heads with equal parts raucous party vibe and veteran wisdom.

American pop culture has seen its share of athletes make misguided, gimmicky attempts at musical crossover. Andrew prefers to let the music speak to his authenticity as an artist.

Angelo Spagnolo: When you were snowboarding full-time, what were you doing musically?

Trouble Andrew: When I was snowboarding all the time I never really messed with trying to make music. I got turntables awhile back and I used to spit little freestyles with my friends, but I never really tried to do anything with music. Music was more of a motivation for me to snowboard. It was only when I hurt myself that I really dove into it, and then it just kind of became more and more a part of my everyday life, creating music rather than just being a fan.

When you started to make that transition did anybody question it?

Most of the people that knew me, knew that at that time I was broken off. My body was pretty messed up. Even after I healed from my knee injury, once I wrote the [first] record [“Trouble Andrew,” 2009], I had another injury right after it, so I was really messed up for awhile. Everyone was psyched on it like, “Damn, he’s making something happen even though he can’t ride right now.”

When I first wrote those songs like “Chase Money” and all that stuff back in 2004, by the time I had that record done I didn’t really see much more than, “Cool, I’m gonna write these songs here and there and maybe produce and write for other people,” but not really take it much further than that. I thought, “I’ll never do a live show, I’ll just let my friends use the music in their video parts and I’ll use it in my stuff.” But because of the encouragement that I got from everybody, the positive feedback about the music, that made me go harder at music and take it more seriously.

It’s actually really similar in a lot of ways. Obviously, I’m not going and physically challenging myself as much. It’s more of a mental challenge. It is physical too, being on the road and performing. The last show I did, I got off the stage and pretty much collapsed. I saw a picture of myself, my face was so red it looked like it was gonna explode. It’s physical, but obviously it’s not as demanding as going out and trying to get a sick shot or win a contest.

The mental part of it is really the same, psyching yourself up to have the confidence to go and do it. Stepping on stage is like stepping into a contest. Being in the studio is like doing a video part. Being on the road with your band is like being on the road with your film crew or your posse at contests. I really enjoy it because there’s still that camaraderie. I think I was prepared for the lifestyle of music from having had that experience [as a snowboarder.]

What’s up with snowboarding right now? How often do you get to ride?

I went out to Mammoth for the [Roxy] Chicken Jam and performed there with La Roux, and it dumped there so I stuck around for a few days to ride. Then I’m gonna be at Telus[ World Ski & Snowboard Festival,] so I’m gonna stick around for two weeks after and hangout with DCP and Romain and those guys and film and shoot for YES. I want to ride more. I definitely try to get it in as much as possible.

What’s up with YES?

I actually just got the samples for my pro model. Those are my boys. We’ve spent tons of time on the road together for years. When you spend time in the backcountry together, you’re looking out for each other’s lives. It just felt like the right move to join on and be a partner with those guys. For me it’s all about staying creative and riding with my homies.

You’re also constantly doing stuff with other brands like Nixon and Electric, how do you find time for all your various endeavors?

TA: It all fits into one thing, I think. If I’m not doing a show or rehearsing or in the studio, writing, when I’m on the road I’m still sketching out stuff or I’m on the phone with whoever talking about the next move. I’ve got a solid team, that’s definitely a big part of it.

Was there a theme or concept behind the new album, or is each song the product of individual inspiration?

Over a couple of years there have been so many songs–there are probably 20 or 30 other songs that didn’t make the album. [The album] is the product of a couple years of writing and growing as an artist, growing as a person, experiencing new things. I get inspired day-to-day I guess. I didn’t really look at it like a full concept. I didn’t really have a plan. To me it was just kind of like done and then it was like, “This just seems like this is the album.”

How’s the reception from fans of your music who don’t know you as a pro snowboarder?

It’s cool. It’s always a pleasure for it to go that way. Most times, people that knew before they heard it are like, “Wow, I was totally surprised, I didn’t expect it to sound like that.” With the people that find out afterward about the snowboarding, it’s cool, it’s great that they find it interesting.

What’s on the horizon for Trouble Andrew?

I’ve got a new mixtape, “Trouble Gang Mixtape Volume 2,” coming out. I have a whole other Trouble Andrew album that will probably be dropping toward the end of the summer. Then I have a whole other EP that’s coming out: The Mr. Andrew Project. I have my artist JOFO coming out later this summer on Trouble Gang Records, so that’s exciting. You’ll probably see me in the YES snowboard movie, and you’ll probably see me on the road some more. I just like to do different things, that’s why the Trouble Gang Mixtape stuff is always fun because it gives me a chance to work with different artists who are doing different genres.

Hip-hop and rock have always had a huge influence in skateboarding and snowboarding, and now we’re starting to see artists come out of those scenes. Does your experience as a rider directly manifest in your music?

Definitely. I always try to explain to people that don’t live within the culture, because a lot of people look at it like, “Trouble, he’s a pro snowboarder, he’s just capitalizing on his fan base.” They don’t understand that it’s not the same as me being a tennis player or whatever. We live in this [snowboarding] culture that breeds art; Visual art, music. You don’t look at Jason Lee funny for being an actor, and you don’t look at Mark Gonzales funny for having real gallery shows. We understand. [Music is] within our community since day one; all the old skate videos that we loved, snowboard videos and surf videos. If you live within the culture you understand that it’s all tied together and if you’re on the outside you probably see it differently.

‘Dreams of a Troubled Man” was released March 29th and is available on iTunes and Amazon.com. The Trouble Gang Mixtape Volume 1 is available as a free download at www.troubleandrew.com.