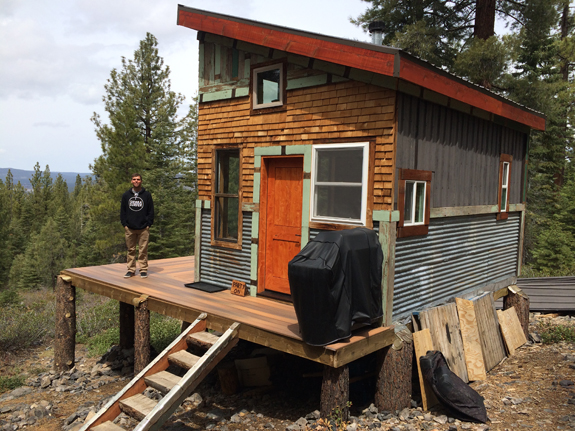 Rent, utilities, cars, social networks, phones —the list of material “necessities” in our society goes on and on. Even snowboarding can seem dauntingly complex, with multiplying rotation and flip variations, new companies flying in from all directions, and ‘likes’ being counted and watched like numbers on the stock market. Snowboarder and awesome human being, Tim Eddy along with his girlfriend, Hannah needed an alternative to the modern living situation. They put their minds to building a cabin that would lessen their ecological footprint and remove the clutter from their lives. This spring marks the one year anniversary of the construction of their home, a 12’ by 16’ cabin in the foothills of Lake Tahoe.

I caught Tim on the road, driving home after a month of traveling between the Pacific Northwest and Jackson Hole. He was glad to say he’d be spending the next week sitting on his porch with the beautiful California sky above and the trees below. He and Hannah have joined the ranks of mountain-dwelling hermits, bird watchers, squirrel-loving poets and old-time homesteaders. In the quiet of the forest, they’ve found what they were looking for: simplicity.

So, you built yourself a home. Where is it? What is it?

It is in the North Lake Tahoe area, just outside the city limits. It’s just a little, off the grid cabin. It’s 12 by 16 feet, so 196 square feet, with a sleeping loft up top. It’s built on a property that was just raw land when I got it, nothin’ there except for trees and wildlife. My girlfriend and I got the land kind of just freestyle. We didn’t have any plans. We just wanted to do something with the land. We wanted freedom. So we got the land, camped on it for the summer, and got the feel for where we would want to build something and where the sun was throughout the year. We dropped some trees in one area that’s got a killer view, looks due west, so it gets the sunsets and all that good stuff. We put trees up as posts and built a little tree house cabin. The deck’s actually the same square footage as the house by design, to be more outdoors, livin’ life on the deck.

Soaking in those natural vibrations?

Exactly. You just want to be outside all the time. And then in the winter time it’s great. It’s real small so it stays nice and toasty. It’s super-efficient for heat. It’s up off the ground, so we don’t have to worry about digging it out and lugging snow and all that crap. It’s awesome, too because you got the weather report right out the window. It looks right out over the Pacific Crest Ridge, so we wake up in the mornin’ and do the official weather test, see what the deal is and go board from there.

How did you both settle on the idea that living in a cabin in a remote area was what you needed to do?

We were living in a condo in Truckee. We’d lived there for a couple years and we were just realizing that we weren’t able to live a lifestyle of our choice. We were paying for gas heat, when we wanted a wood stove but couldn’t put one in. We were using more water than was necessary and using electricity unnecessarily. Basically just using utilities and materials beyond what we wanted and thought was right, and we didn’t really have an option to change that. So we wanted to build something from scratch, start from zero, and then build the systems and utilities up until it reached a comfortable level. At that point we’d be able to live with nothing more and nothing less than what we needed. We decided it was time. We liberated ourselves and just did things our style.

What were the key things in the design that you wanted?

First of all we wanted a little house without any fossil fuels, no gas, nothin’, just using wood and the sun. So we built the utilities around that concept: solar electricity, solar hot water, wood stove for heat, cooking, and hot water. We were just drawing up endless ideas for a house. There’s 101 ways you can build a little cabin. But we decided upon the simplest design, just a shed roof with one pitch and go from there. Tall walls, windows for the sun, like a solar cave, and then having the roof shed off the back of the house. We stopped with all things complicated, the process of elimination, and from that point we started building the foundation first, framed out the floor, and then we had the deck all done for the house to be built upon. We basically walked it out, like, “This could go here, that could go here.” We came up with the dimensions freestyle. We knew we wanted a sleeping loft to save floor space. From that point on everything else came together as we were going, what kind of wood stove we would use, how much water we would need, all that stuff was designed as we went.

How did the building process go?

Building was awesome because I hadn’t built much in my life. We went out and Hanna’s dad is an architect, so he knows a thing or two about building. He came out for ten days and we rounded up the troops, all the friends, and he was pretty much the foreman. In ten days we got all four walls and the roof done. It was kickass. We were learning every moment. We built it all with a generator and minimal tools: a couple nail guns and a skill saw. We were working twelve hours a day, gettin’ after it.

The cool thing that I’ve learned from building is that a lot of it is just common sense, freestyle, wingin’ it. If something isn’t matching up, like there’s a gap, we’ll just wedge a 2×4 in there. The window hole we cut is too small, let’s cut it bigger. It was just a lot of hard work, but we didn’t run into any crazy issues, which had a lot to do with the design we chose. It was just so simple. The door could shut a little better, I’ll admit that. And the stairs could be a little more level. Because we built it up on these tree posts we were starting on a pretty interesting foundation, so as we built we would realize that things were a little off. We weren’t aiming for perfection by any means. We were already starting crooked and it just worked out. We definitely went the more function over fashion approach.

So are you both there permanently?

Yeah, and actually this month marks one full year. We moved in full time last April. So we’ve been able to see all the seasons come and go and adjust the place and get it dialed for each season. The winter was the big one. We were like, “Here goes nothin’.” We wanted to survive the winter. That was the goal. So we got what we wanted.

Do you find yourself more rooted now that you have a home? Are you more drawn to head home to Tahoe?

Absolutely. I haven’t been home in a month and I’m on my way home right now. The difference is like, you used to come home, unpack and kind of want to get out and go about, but now I really just want to get home and sit on my deck and soak up some rays for a week before I have to leave again. I finally feel like when I do go home to Tahoe it really is home and I want to spend time there instead of having it just be place where I store my stuff.

What does a normal day of cabin life look like?

One of my favorite parts about it is just waking up with the sun no matter what time of year it is. So rise with the sun and then in the winter time fire up the wood stove. Get some breakfast goin’, coffee cookin’ on the stove, and then chill out and listen to some tunes. It’s slow days. Once breakfast and everything is done it’s figuring out where to go snowboard and figure out where the conditions are ripping. And if they’re not it’s all about reading and stretching and just relaxing.

And the other best part about it is that in the down time now there’s lots of chores to do and tasks that need to be done, whereas before, in the standard living situation, you had all this free time. I’d never know what to do with myself, so I’d be sitting there like, “Okay, there’s this thing called the internet, I could go on that for a long time.” Now I could go chop kindling, or harvest some snow to put in the water tank. There’s always some task to do to keep the days rollin’. I usually do some chores and then go to sleep when the sun goes down. Early to sleep, early to rise.

You’ve joined a wild group of people who have taken the natural, simple-living route, in with all the crazy poets and hermits who would live alone with the squirrels and the birds.

Oh yeah. In the summer there’s a lot of time spent sittin’ outside just observing the natural surroundings. Seeing what the animals are doing and observing how nature unfolds. It’s a really interesting process. There’s lots of observing and contemplating.

Do you think you’re getting inspiration from living there?

Yeah, absolutely. I feel like I have more time to just sit and think clearly. Think about the things that are important to me and my priorities. There’s nothing more inspiring to me than being outside and being quiet, being able to hone in and think things through and be doing what I really want to be doing. It puts life in perspective because when you’re out there you realize, not only am I trying to survive, but the whole natural world is surviving without a whole lot of complication.

Does living there have any effect on your snowboarding?

I’ve actually been thinking about that on this drive. I guess my whole life has become so simple. I’ve been discovering the simple joys and finding amusement in the simplest things. And what I’ve been doing this year on my snowboard is really honing in and realizing how fun these little tricks or turns, or funny little handstands, just realizing that it doesn’t take much to get your stoke on. That, and it’s really got me goin’ on my whole experience on this planet, realizing what it means and what it doesn’t mean. It’s basically just the process of snowboarding —every day, just enjoying what it is. There’s a lot of questions that I don’t have any answers to, but in the end there’s nothin’ too serious about it.

The best part of it has just been the simplicity in everything. Everyone gets caught up in the grand scheme of things and forgets what’s important, but it’s nice to have something to come back to and realize that there’s not much going on really. It’s actually simple, and that’s what stands out in snowboarding, too: keeping it simple and keeping it fun.

The Unstrapped web series explores the creative pursuits of snowboarders beyond snowboarding. We are a society of creative individuals expressing ourselves in myriad ways beyond just strapping in. Whether it’s making art, building a house, or something that just adds a different perspective to life, we all find our passions and add them to the collage.