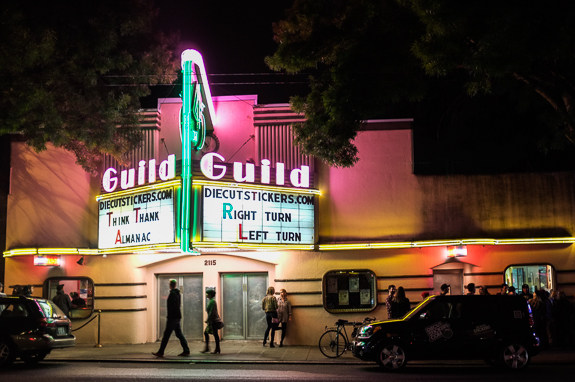 Module: gallery_album
Item: ThinkThank2014
Displays the photo gallery for a selected Gallery Album.“I got a good vibe,” I said, tentatively.

“Good. Vibes are what I intended,” Burtner replied. “It’s an art film.”

That word has some connotations. You might picture black smocks or paint splattered overalls or maybe the Mona Lisa, but the word “art” never has anything to do with the ordinary. Unless you’re painting tomato soup cans and in turn making some kind of statement about normal, I guess.

So, on the topic of art: Jesse Burtner (and Christina and young Ollie) made an art film. It’s called “Right Turn Left Turn” and is a stand-alone half of Think Thank’s 2014 double feature, which premiered at the Guild 45 Theater in Seattle last night. The other half, entitled “Almanac,” was made by Sean Lucey. It was rad—high-paced boarding from some of the more open-minded boarders out there. Undoubtedly future-friendly and a good watch.

A reminder of fun. A good vibe. Indeed, it’s that simple when you break it down, isn’t it? I can’t tell you that was the point of “Right Turn Left Turn,” but there was a certain catch-all focus on cutting the ordinary with the extraordinary, maybe a purposeful juxtaposition of how smiles come from very typical situations with friends as much as exceptional moments atop a snowboard. Or not. Jesse will have to tell you that. After all, it’s his art piece, and, as he said, he made it for himself.

As for me, I’m still trying to figure out some of the nuances of the film. But there’s no doubt that “Right Turn Left Turn” is broadcasting good vibrations. Maybe it’s as simple as feel-good art, like ‘70s-inspired Technicolor sensory sensations. Then again, maybe it’s something way deeper that I’m totally missing. Either way, art is what you make of it. I encourage you to have a look and decide for yourself.