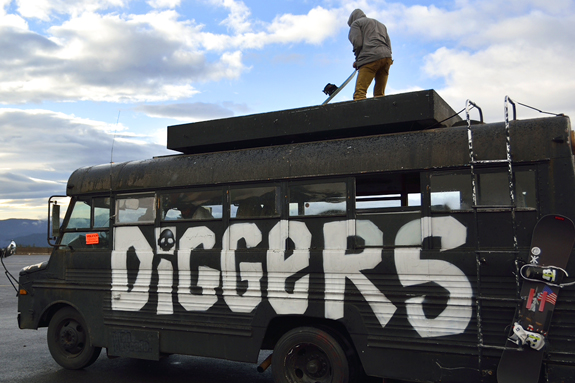 Riding in Oregon around 8,000 feet above sea level at the Timberline Lodge Ski Area, an unforgiving August sun beats down upon Mt. Hood’s melting slopes. It’s a hot day for any activity, let alone snowboarding. In the High Cascade Snowboard Camp (HCSC) terrain park, a 13-year-old grom approaches a ride-on flat bar for her third 50-50 attempt of the afternoon. She slides across the rail, pops a small ollie off the metal’s end and rides away clean with her hands in the air—claimin’ the first successful make. Through a sun-kissed smile she screams in excitement. Blake Geis, the Assistant Head Digger at HCSC, says these are the most rewarding moments for The Diggers, the 18-person crew that spends their summer shaping the camp’s park. “It’s like, we put that rail there and did our part in presenting these kids with an opportunity to live out these inspiring moments. It’s those moments that can get them hooked on snowboarding for life, and to help provide that experience for a future generation of riders is one of the best feelings on earth.”

The park is the pride of HCSC and the Diggers are it’s lifeblood, but their integral role at the camp is more behind-the-scenes than most–kind of like the theatre personnel in a playhouse. When a theatrical production concludes, it’s customary for an audience to rise from their seats and show praise for the performance through a standing ovation. But one should note that the practice only invites the inherent stars of the show, the actors and actresses, to come out to take a bow. What about the lighting specialists, the stage crew, the artistic director? Like the performers who wow us on stage, those who shred, film and impressively destroy the park do deserve a nod, but the calloused hands behind the park’s construction deserve daps as well. Without the strenuous and detailed work put in by the Diggers, HCSC’s summer snowboard show could not go on.

Every morning as HCSC campers and counselors arise from their shred induced stupors, the Diggers are already up on the slope, raking and readying the park for another day of seamless shredding. “It’s like Disneyland for the campers,” Blake says. “We aim to make it perfect by the time they arrive, so they show up to a flawless park and get to think that it’s just magical.” Everyone rides together ‘til noon when the campers stop for lunch and the Diggers get back to manicuring takeoffs and landings. Despite the high temps and taxing labor, the crew’s collective stoke carries them through each day. Even after nearly three months straight of daily raking and riding, when it’s time to snowboard the whole lot of them manages to make it out for a few laps. It’s a testament to their love for snowboarding. Blake says the unwavering energy and positive reinforcement coming from their “lead-by-example type boss,” Head Digger Corey McDonald, is also what helps keep them going.

Corey McDonald has been Head Digger at HCSC for nine years, and has been shaping terrain parks since the winter of ‘97. He’s had his hand in building numerous courses around North America for events such as the Dirksen Derby, Holy Bowly, Big Wave Challenge, the U.S. and Canadian Opens, and more. Born and raised in Boise, ID, Corey spends winters directing the terrain park near his home mountain, Bogus Basin, and smashing pow when it’s around. At 41-years-old, Corey has got a few years on his fellow Diggers, but his vitality is on par with the rest. Blake says watching Corey work is what deters him from ever lazing around. “Corey is in his early forties and is still out there digging holes, raking features and carrying rails with the rest of us,” Blake says. “Once the work is done, he shreds. Whenever I get tired, I’ll look over at Corey and think, ‘Alright, I’m only 25—I’ve got to step it up.’”

The proof is in the footage–Corey filmed the below video segment between the ages of 38 and 40. How many guys do you know that are still charging this hard four decades deep?

C-Mac from JETPACK on Vimeo.

While Blake credits Corey for creating an energizing stoke, Corey gives kudos to camp and his coworkers for the buzz. “This place keeps my brain active,” Corey says. “I love it. I just love going up there, building a sick park and being surrounded by such positive energy in snowboarding. It charges you up in a way that’s hard to beat.”

Corey has seen a lot of changes over the near-decade he’s been running the HCSC park, from the enlargement of an 18-foot halfpipe to a full-sized 22-footer, as well as the additions of a minipipe, a rope-tow serviced lap park and a healthy plethora of jib features to go with it. “For a while it got a bit crazy with a lot of colossal rail, box and jib stuff,” Corey says. “It’s changed from those days to be more consistent, yet still innovative, and also more suitable for everyone—from beginners to the pros.” Similar to his park savvy predecessor, world-renowned cat operator Pat Melendoski, Corey strives to utilize the space he has to work with as efficiently as possible, creating a progressive layout with a skate park influenced flow.

Corey, Blake and most other Diggers would agree that between working on snow and lapping a pristine park with their homies throughout June, July and August, it’s safe to say they’ve landed one of the best summer gigs ever—right on the sweet spot. A lack of the scene’s spotlight doesn’t seem to bother them, for they didn’t sign up as Diggers to be stars of the show. Instead they place pride in maintaining their top-notch terrain park, hard work and jobs well done. Like theatre personnel in a playhouse, the Diggers’ behind-the-scenes work allows for HCSC’s curtains to rise and the show to go on. Although unlike theatre, here it’s not advised to go out and break a leg.

On top of constructing the park, Diggers have a knack for tearing the place apart, too. See some of the action that goes down at High Cascade Snowboard Camp in The Summer Snowboard Movie:

Thank you to Rick Hower of Timberline Lodge, as well as Tom Johnson and the rest of the High Cascade Snowboard Camp staff for help up the hill and for the warm Oregon hospitality.