In May 1992, a hip-hop group called Main Source released a track titled, “Fakin’ the Funk.” The song fires lyrical shots at any artist whose music covers topics they can’t actually back up. As a young MC, Eric “Ric Riggler” Rhea took those words to heart and still abides by them. That means everything you hear in Black Powder Movement, Ric’s snowboard-focused EP featuring songs about heliboarding, scoring powder in Japan, and exploring the Himalayas and beyond, comes from his real-life experiences. “You cannot fake the funk in hip-hop,” Ric says. “I have to have done it or I can’t say it. Now that I’m rapping about snowboarding, I really need to be on my game.”

Fortunately for Ric, he’s got rich experiences to draw from. He grew up in Detroit where his aunt Betty was a member of the Jim Dandy Ski Club. Ric was on skis at Mt. Brighton by the age of 4 and he’s been hooked on the hills ever since. Music played an equally powerful role in his life. “Being a teenager of the ’80s I was around as hip-hop was making its debut to the world,” Ric says. “I grew up in the era of positive rap. There was a message in the music.” 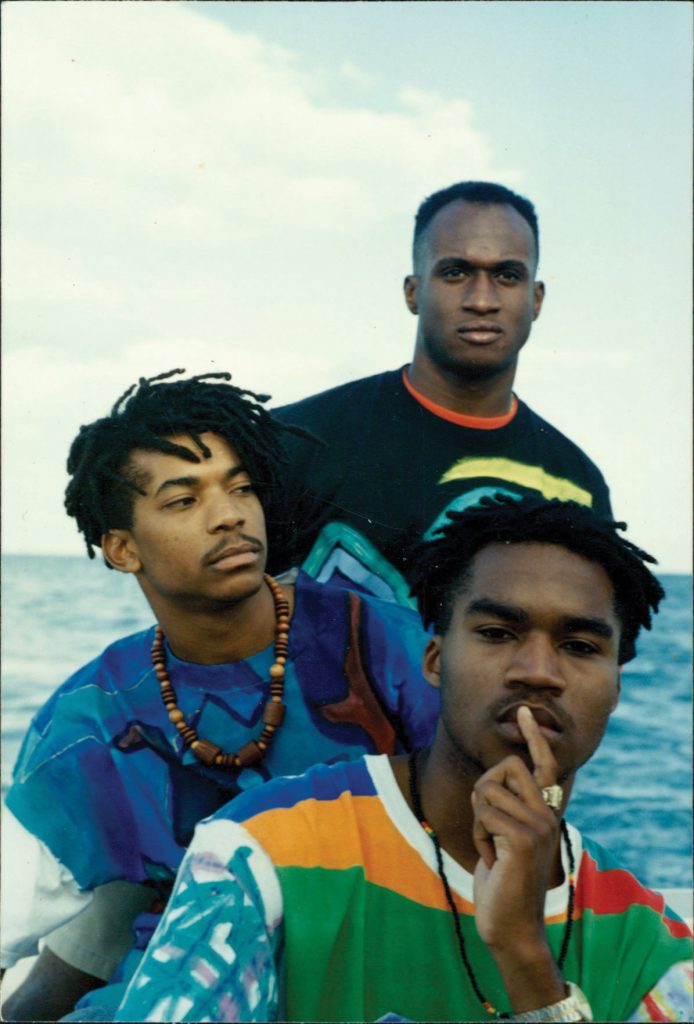 As fans of Eric B. and Rakim, Run DMC, the Fat Boys and the like, Ric and his friend, Khary, formed their own rap group, King Krew 2. Ric produced beats on his cousin’s old drum machine before the duo began collaborating with another friend, Bennett. “Bennett used to be the DJ for our high school rap group, and he also skis with us,” Ric says. “Not only did we grow up and go to school together, he’s one of my closest backcountry friends too.”

Following high school, Ric enrolled at Howard University in Washington, D.C. Howard is one of the United States’ most prestigious historically Black universities. Ric majored in political science, minored in business, and continued making music. His aptitude for the latter two earned him a job as an A&R manager at the New York City offices of Qwest Records, owned by legendary music producer Quincy Jones. Ric concurrently launched his own production company, 313 Entertainment Music Group. 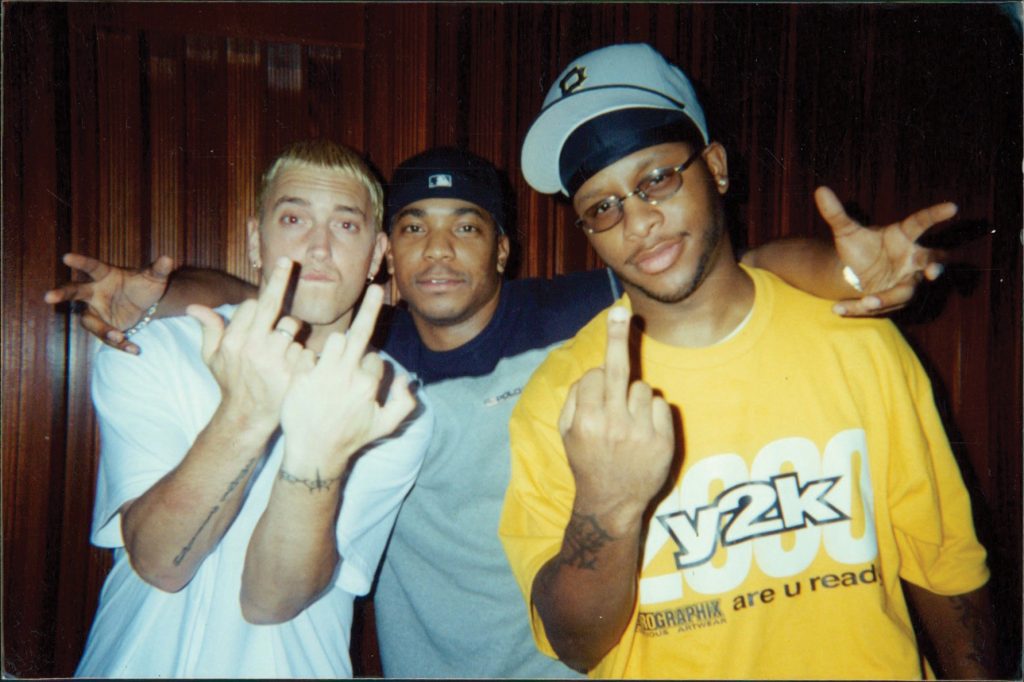 “I was back and forth between Detroit and New York, and I discovered an artist by the name of Royce Da 5’9’’,” Ric says. “I signed him to my production company and executive produced his first two albums. I tried to sign Eminem to Qwest Records before Dr. Dre and Interscope [Records] did, but Quincy didn’t want to do any rap music at the time. I actually stopped rapping for a while because I was hanging out with Royce and Eminem and saying to myself, ‘If this is where the level of lyricism is at now, I’m going to stick to the business side of things. I can’t keep up with these guys.’”

Times change, people change, Ric changed. He discovered his love for interior design and founded Furnish My Space, a furnishing company in NYC, eventually leaving the music industry behind. On the snow side of things, Ric traded his skis for a board. “I’d been skiing for like 22 years at that point,” he says. “One day in ’97 Bennett and I took a snowboard lesson together at Hunter Mountain [NY]. I remember falling backward and hitting my head on the ice so many times. I was like, ‘This is for the birds.’”

Persistence prevailed, and by 2003 Ric found himself ripping top-to-bottom runs at Whistler, BC during the National Brotherhood of Skiers’ Black Summit, an annual event that brings thousands of people of color together at various resorts around the world. “By 2010 snowboarding had become a diehard thing for me,” Ric says. “Then the traveling came about—four years with trips to Japan, 2014, ’15, ’16 and ’18. We went to Revelstoke [BC] one year instead of Japan, and this past winter we went to the Alps of France.” 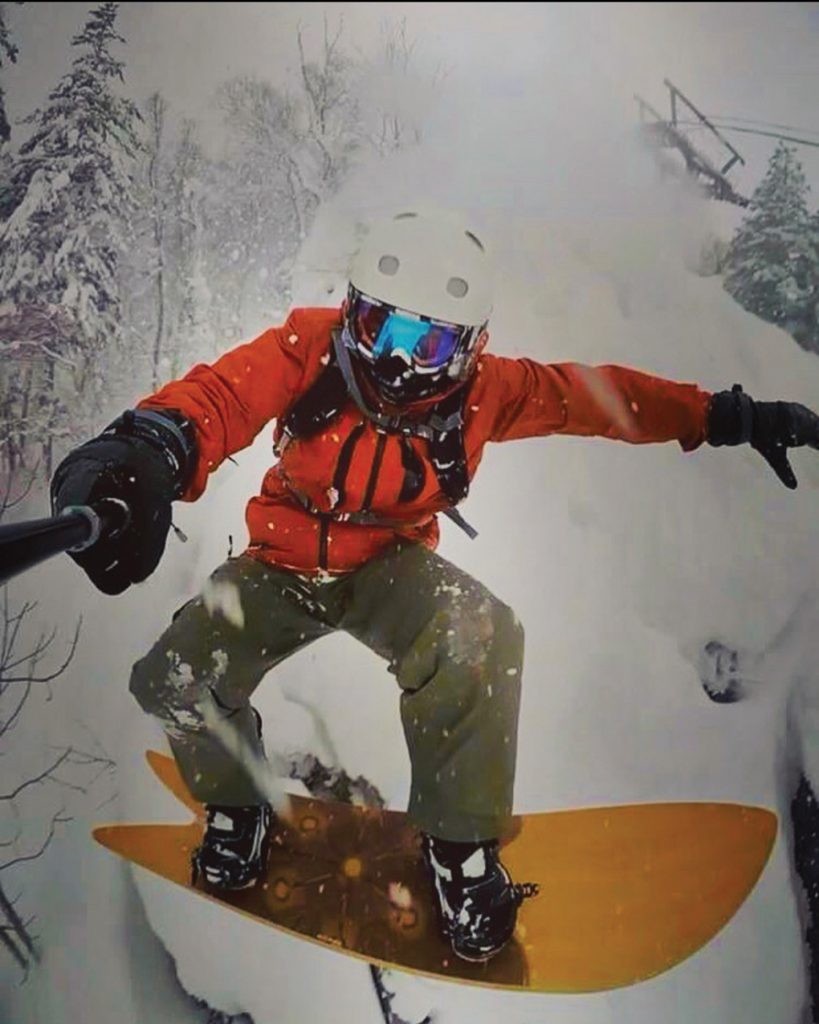 In 2014, Ric’s inner-MC drew him back into the studio. With a desire to shine a light on his fellow Black shredders, Ric made a snowboard-themed rendition of Young Buck’s “Shorty Wanna Ride.” From there, the raps snowballed. “I decided I’d do one every year to get people hyped for the season,” he says. “Then it turned into a whole mixtape. I ended up calling it The Black Powder Movement. Every time we go someplace in a huge group, it’s kind of an anomaly. Sometimes Black people don’t even know that Black people ski. Like, ‘I thought I was the only one out here doing this; it’s good to see some other people of color out here.’ It brings attention to a bunch of Black people in the mountains, but especially the more extreme side of it, like the backcountry, snowcats, heliboarding and touring, when [in the media] you don’t really see many people of color out there doing that.”

In the process of creating his mixtape, Ric sampled songs from artists’ ranging from Pat Benatar to Gucci Mane, rapping over familiar and original, self-made beats with rhyme schemes and delivery that hearken back to the era of hip-hop that raised him. His lyrics highlight the Black community’s underrated presence in snowboarding, and with inclusiveness at the forefront of his mind, he simultaneously aimed to create something everyone could enjoy. “I didn’t want it to feel exclusionary,” Ric explains, “because the people I know that do this across the world are of all different races, creeds and everything, and at the end of the day what I’ve noticed is nothing unifies people like the love of the mountain and wanting to thrash through powder. We do it with all different types of people, but we all enjoy it for the same reasons.”

Like Wu-Tang, Ric Riggler is also for the children. In his spare time he serves as a board member of the Hoods to Woods Foundation, a nonprofit that encourages outdoor awareness and provides snowboarding opportunities to NYC kids. Ric hopes his music, videos and offering these experiences will help inspire the groms he mentors to make healthier lifestyle choices than some of those depicted in the newer music he justifiably critiques. “I like the new rap because I hear the beat first, but some of it is just so ridiculous,” Ric says. “How many rappers have we seen [overdose] on drugs? They’re rapping about lean and codeine, Percocet or all kinds of shit that will make them strung-out drug addicts or kill them. That’s crazy. Those kids are listening to that music, and this is what influences them, the same way that it influenced me. So I’m trying to give them something. For young kids who grew up in the housing projects in New York City, you might be thinking you’re gonna leave the Concrete Jungle just to go up to the woods to look around and say, ‘Man, there’s nothin’ out here but white kids and white people. This isn’t really for me.’ I’m there to be like, ‘Check this out. It is for you. You can make it cool and do it the way that you want to do it. No one is excluded from this. It’s the world, it’s the Earth, the mountains, and the snow is here for all of us, together. Don’t keep yourself within these confines and boundaries of what you may think, or your friends may think, are there for you.’”

Ric has no intentions of making any money from his snowboard-infused hip-hop despite its increasing popularity—evident through both Lynsey Dyer and Ryland Bell hitting him up for exclusive tracks for video projects they’re working on. “I just put it out online for the world to enjoy, to answer peoples’ stoke,” Ric says. “And at the same time, to send a message.”