At the beginning of the winter Austin Smith made a bit of a departure from his standard season. After somewhat unexpectedly coming to own a retired fire truck turned mobile home, Austin decided to squat in the Mt. Bachelor parking lot for a month and a half. Rather than chase storms all over the planet, he chose to hang at his home resort. And ride every day.

We talked back in late-January. Austin was almost giddy. He was overtly psyched on life in the lot and couldn’t be happier about being right there at Bachelor.

“When I was 15 I’d take the earliest bus up to the mountain, snowboard all day and take that last bus down from the mountain, no matter what the conditions were. If it was raining, snowing, sunny, whatever,” says Austin. “This was a way to force me back into that mindset, I guess. And it’s worked. Fortunately it’s been an incredible winter and I’m super thankful for that. It’s been non-stop pow. And yeah, it rained a little bit, but I was still out there. It was awesome. I felt like I was 15 again, thinking: ‘Rain days are actually the best in the park. It’s kind of soft and no one is here.’”

Call him a born-again grom. And all he had to do was move into a mobile home. Here’s Austin to talk about how he procured this rig, a few lot-life hacks and how the whole experience has served as a reset of sorts. 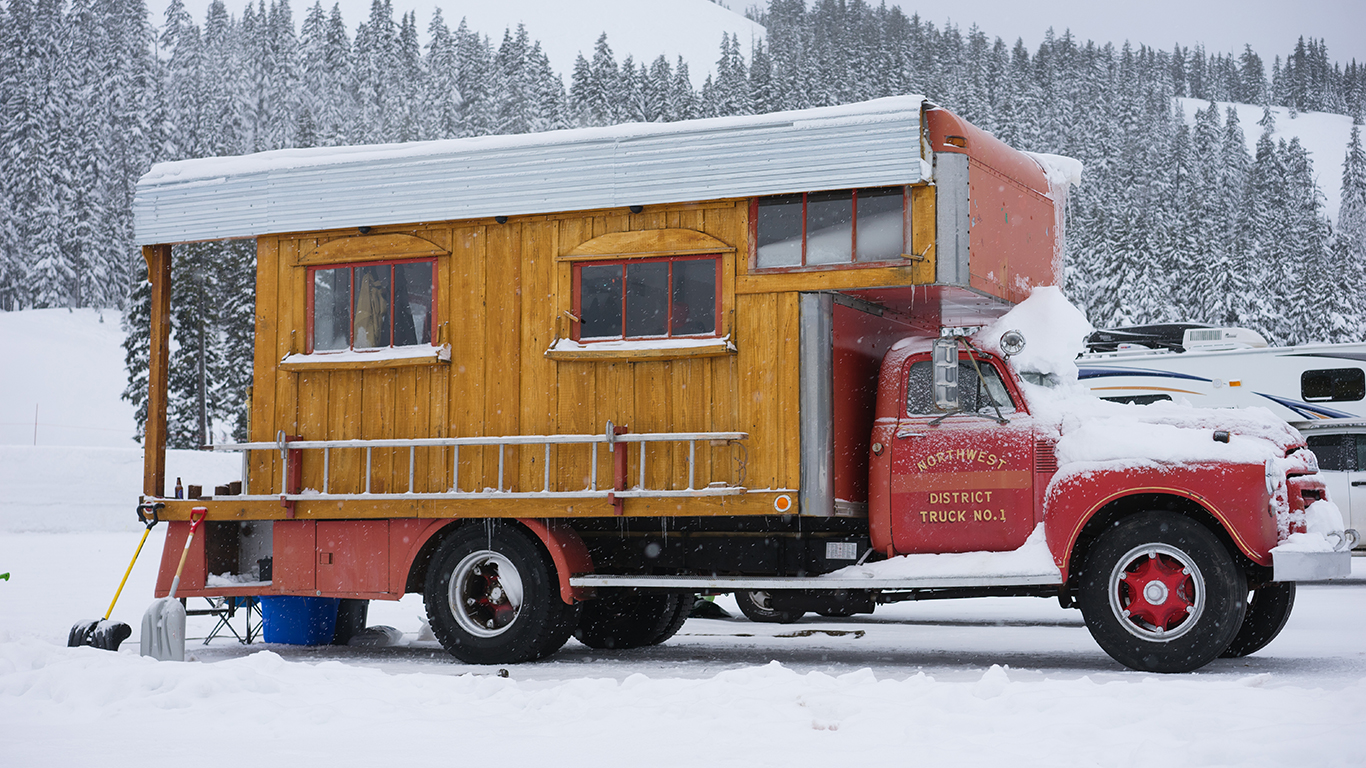 The Snowboarder’s Journal: Where’d you get the fire truck?

Austin Smith: The fire truck came from Michigan. It’s funny, it says ‘Northwest’ on the side of it so people think it’s from this Northwest, but it’s actually from NW Michigan. Someone else had the fire truck before me, he took off the original fire engine portion, put on this big U-Haul box looking thing and started the conversion process. They put on the outside stuff, paneled it with wood, put on some fire hoses, some axes, all the dorky stuff that’s on there. And then my brother saw it on Ebay, there was a ‘Buy It Now’ price and he hit the ‘Buy It Now’ button.

We had been working on this other project together, and he had some money of mine so he called up and said, ‘Hey I found this tiny house, it’s awesome and it could be a really cool project.’ I was like, ‘I don’t really know how I feel about it, but…’ But, he did it.

So him and my dad flew out to Michigan to pick it up. They thought it’d be a cool father-son bonding road trip, but right when they started driving, they quickly realized it was so noisy that they had to wear construction-grade noise-canceling headphones the whole drive. So, there wasn’t much chatting.

At one point they picked up some hitchhikers. The hitchhikers were actually trying to get to Oregon, so they were psyched, just one ride all the way. But a couple hours later they were pounding on the back window of the truck and they asked to be let off, because the truck was going too slow.

It goes about 30 mph. It’s kind of a trip to drive. It’s definitely not mechanically sound. It’s not even registered right now. I forgot to do that.

But, anyway, my brother brought it to my parents house and it sat there for five years, never touched it and then, I kind of realized that it was now my fire truck, my problem to deal with. I wanted to give it life and give it a purpose. I cranked on it for a couple months and finished the inside and made it a little home. I set a deadline of trying to get to the Mt. Bachelor parking lot by New Years.

And somehow I got there at about 11:30 that night. I was in disbelief, in shock, I didn’t think it was going to make it. I snuck in right before this huge storm. And I was just grinning from ear to ear for a few days. And that initial stoke hasn’t really worn off yet. 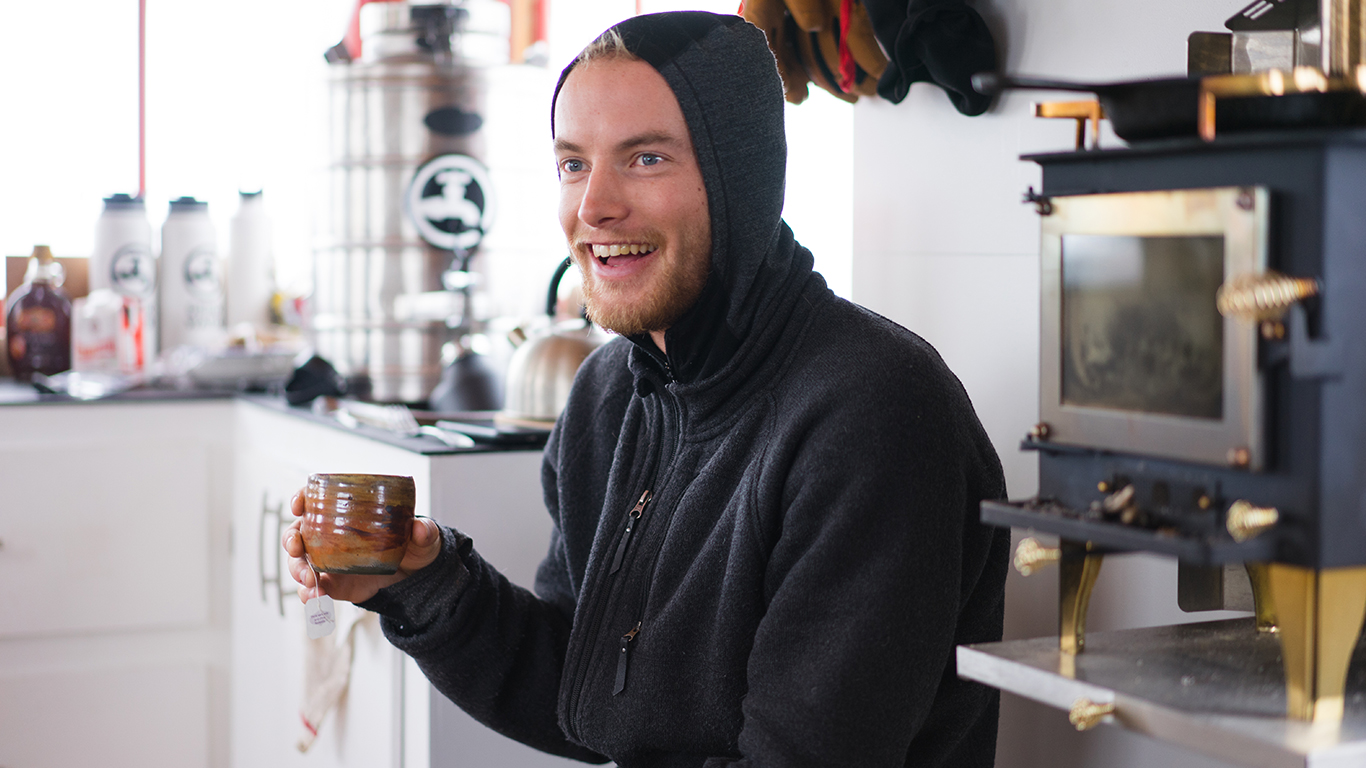 ABOVE Can’t fake that kind of stoke. Austin Smith in his element.

What’s lot life like? Are there a lot of other parking lot dwellers?

Yeah, they kind of come and go with the weekends, with the storms. There’s definitely some familiar faces, people that come back every weekend. There’s this one dude in a school bus who’s right next to me right now. He bounces between a bunch of different parking lots and that’s kind of his full-time deal. He’s epic.

I got another neighbor, Doug. Doug introduced the shot-ski to the fire truck. He built his own shot ski. He loves the shot ski lifestyle.

And my fire truck is definitely a pretty obnoxious-looking vehicle, so there’s lots of gawkers and curious folks that come by and want a tour. There were actually two old dudes that came by today. They were probably 65 and they used to be firemen. There’s all this old fire engine memorabilia on the truck and they were giving me a rundown of what it was all for, all the different purposes of the tools. Now I feel a little more informed. I know my rig a little better.

And a little more tied into the local community, your town, the mountain. And you’re even letting people demo boards from you?

Yeah and it’s gone super well. Like today it was 4:15 and I still had one board that hadn’t come back. And I was thinking, ‘Yeah well, someone stole a board, what’d you expect?’ But he came back at 4:30, just covered in snow, grinning, he was saying, ‘Oh man, they let us get one last lap in at 3:59. Best day ever.’ He was so psyched.

That aspect of it has been really fun. It’s great just to be more involved with the place that I live.

This is kind of a departure from pro snowboarder life as usual, right? Not exactly your typical January and February?

Yeah, I would’ve gone to Japan on Jan 2. I would’ve got back on the 18th. I would have been in Revelstoke right now, with Curtis (Ciszek) and Iikka (Backstrom), and well… I’ve been doing that for 11 years now. Non-stop chasing weather. Always like, ‘Okay where’s it good, where are we going.’ Flying here. Driving there. Just chasing snow, the normal pro snowboarder life or whatever.

I haven’t got to ride at Mt. Bachelor — my home mountain — for so many years. And this year they opened up a new chairlift, a whole bunch of new terrain, so yeah, there were enough reasons for me to stay here. And that’s why I built this thing, to give me a project, and a reason not to leave. 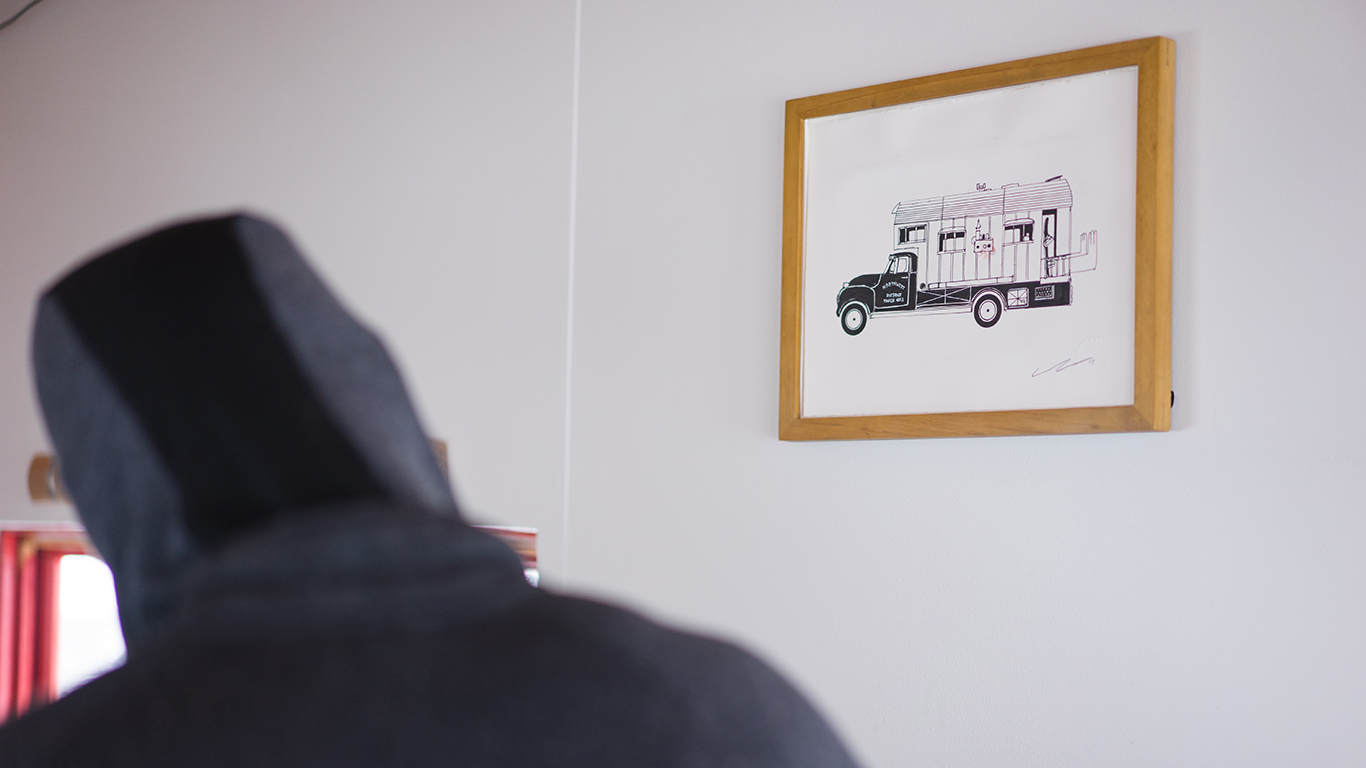 ABOVE Home is where your art is. That’s a John Antoski original.

Tell me about the life hacks you’ve developed in the fire truck. What’s making mobile home living a little easier?

The first week I was here it was -5 degrees and really windy. So during that spell I was spending a lot of time in this North Face Himalayan suit thing. I call it Bernie. Bernie has been pretty clutch. Also I was reading this book about a climbing expedition on Mt. Everest. Picture it: I’m in this little fire truck, it’s dark, windy, shaking around, and I’m wearing the exact same suit they’re wearing in book. In the story they’re like: ‘It’s day 94 and we haven’t had water or food,’ and I was like, ‘Man, I can really relate. It’s pretty gnarly here too.’

It’s 4 degrees and I got my wood stove cranking next to me. But, um… Yeah, Bernie’s been super helpful, in more ways than one, he keeps me warm, keeps me company, gets me in the right headspace for my book.

Tell me about your boot dryer.

My boot dryer is my best invention, or addition, yet. Obviously having dry boots was a main concern and I was working a couple different angles, hanging them, balancing them places, but all those options were kind of sketchy. One of my biggest concerns is accidentally burning the place down. So I drilled a set of bindings into my ceiling and now I just strap my boots into bindings and they hang upside down directly above the wood stove. The hot air goes right up into the boot. And everyday I have perfectly heat molded, warmed up, toasty boots. That was a major upgrade. 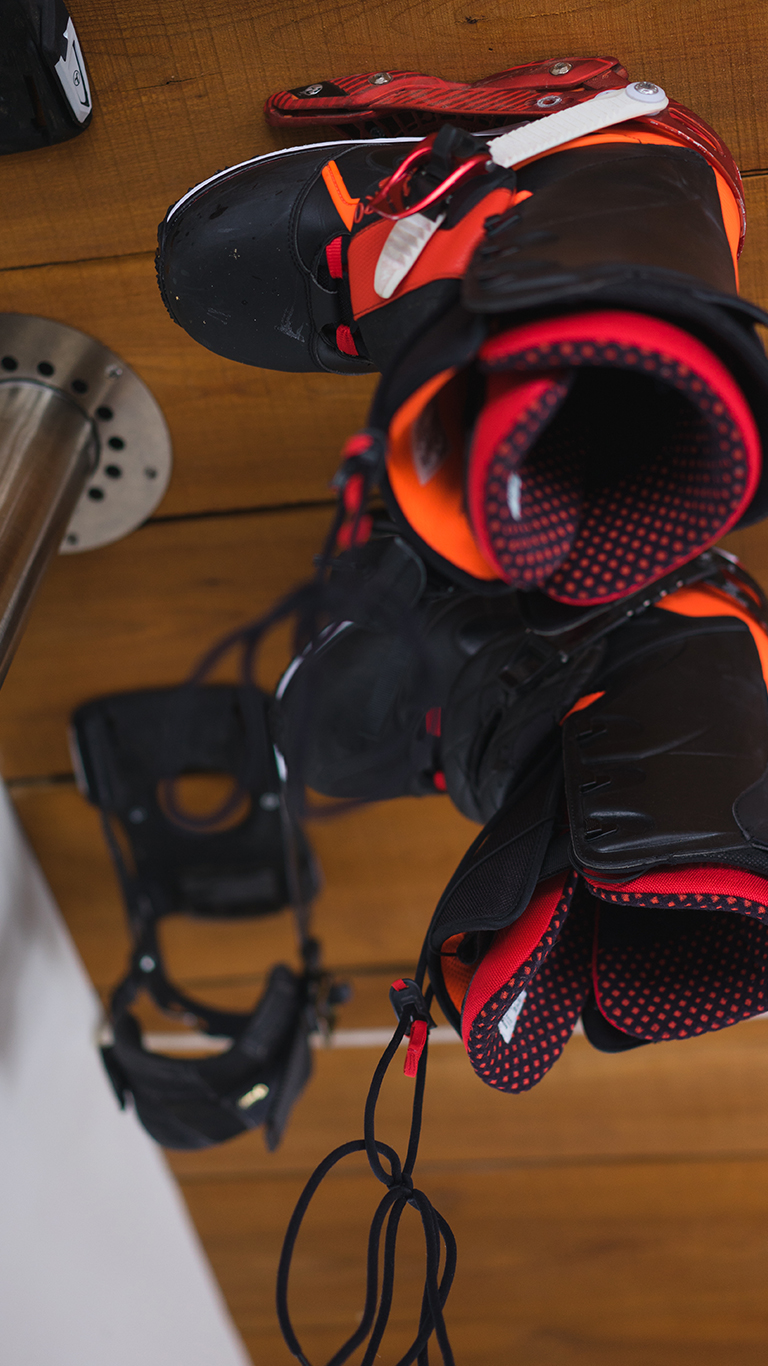 ABOVE Life hacked and the sweet smell of success.

What kind of wood stove do you have?

It’s called a Cubic Mini wood stove. It’s tiny. First thing everybody says when they walk in, is: ‘Wow, that stove looks a lot bigger on the Internet.’ Or, ‘I thought you had a full cast iron pan.’ I have a mini 6-inch cast iron pan. But it does the trick. Right now we’re working with sauna temperatures.

And what was up with the Playboy bunny?

The playmate? Yeah, there was a playmate here. Tiny houses attract Playmates. That’s a fact. Everyone knows that. Tiny House 101.

That’s cool. Is that all there is to tell?

Um… she happened to be staying in the RV next door. I had to run to town that afternoon and then Dirksen sent me a photo of the Playmate crawling all over my fire truck.

I was like, ‘What the? I leave for an hour and I’ve got Playmates crawling all over the place.’ But, then I came back up that night and it turned out she wanted to shoot some photos on the inside, and actually I was a little bit reluctant to let her in. This isn’t some kind of bang bus, you know? This is my brand new home, my sanctuary, and it was going to get tainted, but I let her in. 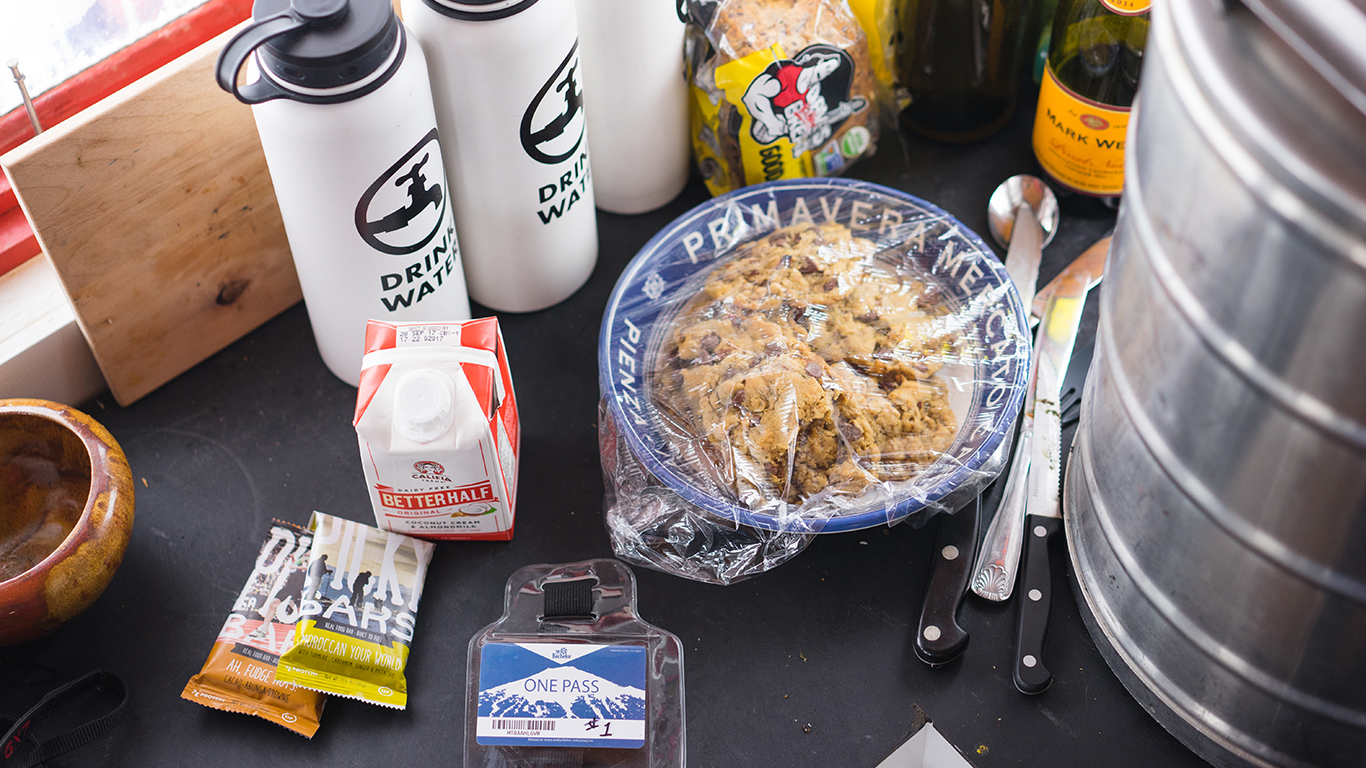 Seems like it’s really working out for you up there?

It’s really working out. And all my batteries are staying charged up, though I didn’t think they would. This January sun light isn’t very, um, lucrative.

I’ve got a couple solar panels and even when it’s snowing out they’ve been charging. Really thus far, no hiccups. I guess the windows were kind of a hiccup. A lot of snow was coming through all the windows because I had a lot of leaks. But, I took care to that. So, now everything is pretty plush.

I’ve got nothing, but I’ve got everything. I feel more at home in this little micro-dojo than anywhere else I’ve lived. It’s the perfect size. It’s self-contained and I feel really at peace in this space of mine. A big reason why I’m doing this is just because my life is a mess. I’m the most unorganized, dirty person, you’ve ever met. My garage is a nightmare. It looks like a combination of a tsunami and a flood and some kind of explosion in there. And this is just a good practice in how to be more organized and clean. So, this seems to help clean my mind at the same time.

Some sort of life cleanse?

Yeah, and a way to just simplify. I’ve worn the exact same long johns every day for the last three weeks. But I’m happy that way. I don’t have tons of dirty laundry everywhere. I’m definitely trying to prioritize how to spend more time in it this winter. 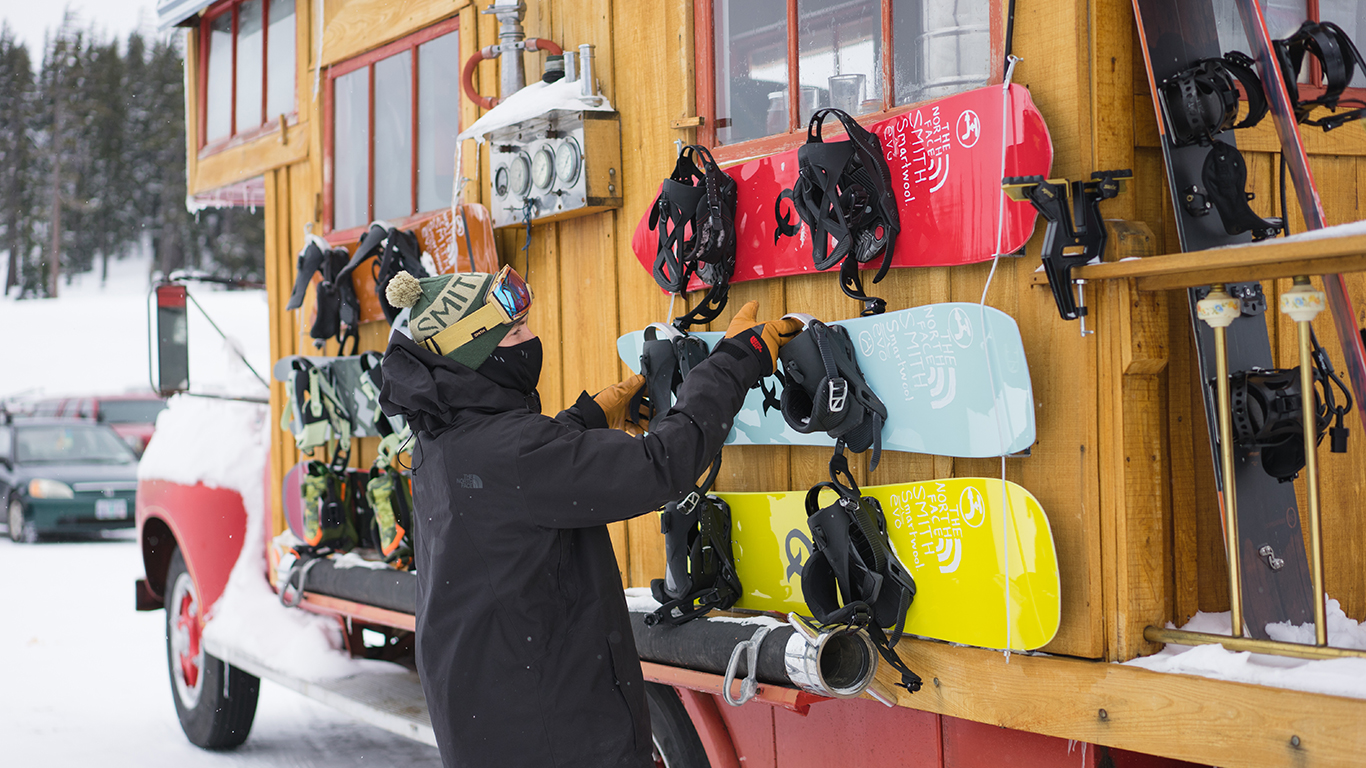 ABOVE Fire truck? Tiny home? Or demo center? All of the above.