Editor’s note: It is with heavy hearts that we say goodbye to Ben Lynch, a revered rider and all-around amazing human who tragically took his own life on April 26, 2021. Shred in peace, Ben. You will not soon be forgotten.

This feature was first published in The Snowboarder’s Journal Issue 10.4.

Some friends and I are walking up to a local bar in Truckee, CA, for a November movie premiere. A hundred people are milling around out front, but one stands out while he blends in: a Colorado cowboy wearing a camouflage jacket and wide-brimmed hat. Getting closer, I can see his leather boots, mustache, bottom lip full of chew, and Coors in hand. He recognizes us and, with a rancher’s twang, says, “Howdy.” Turns out we totally know this dude. Ben Lynch may look out of place, but he’s somehow right at home.

Ben is a boarder of the toppest notch. He’s got style, loves to go downside up, has one hell of a turn, and does not give a care about anything—the kind of rider that makes snowboarding a better place. He also loves to light farts on fire, jam the guitar, enjoy the great outdoors and keep everyone on their toes with his humorous antics—the kind of human that makes the world a better place.

I’ve had the honor of knowing Ben for a while now, and since day one he’s freestyled to his own tune. From his riding to his living, dude is more of an original than the banquet beer. When he’s on the slopes there is an innate authenticity on display—cruising the mountain exactly how he wants, never predictable. His approach to life is much the same. Every time I talk to him, he is on some new adventure; committed to the now and enjoying things one day at a time.

This November, I find Ben at home in Grand Falls, CO, running heavy machinery for his dad. He is getting his truck, the Blue Ox, set up for a winter on the road. He talks about fisticuffs with friends, snowboarding with his mom and subsistence living—all things that, for Ben Lynch, are part of everyday life.

“One of the unique things about shooting the Mt. Baker, WA road gap from the road is that the rider walks by between each attempt. This means you get to interact with them and it makes me feel more a part of the session as I can encourage, joke around and capture unique moments. Sometimes these moments are tense with concentration or frustration, sometimes they exude stoke from the trick just landed—in this case, a laid-out backie and a goofy moment courtesy of Mr. Ben Lynch.” Photos: Jeff Hawe

Tim Eddy: what have you been up to lately? I know you’re a working man.

Ben Lynch: Shoot, man, I’ve been working a lot—running heavy equipment, basically. Excavating, logging and construction with a company called Native Sons, which was started by my father, Craig Schmuck.

The last two weeks—well, I guess more than that—I’ve been hunting a bunch, too. Mostly small game. It’s a cold, brutal winter here in Colorado, so I’m trying to keep the freezer stocked, y’know? I’ve been doing a lot of fishing, too.

Where were you born and what is your history of residence?

I was born in Steamboat, CO, then raised in Kremmling, CO. I went to school between there and Grand Lake mainly—my dad moved to Grand Lake and I would go back and forth between the two.

What brought your dad to Grand Lake?

He was actually born and raised here in Grand Lake. A super local. Loco local. 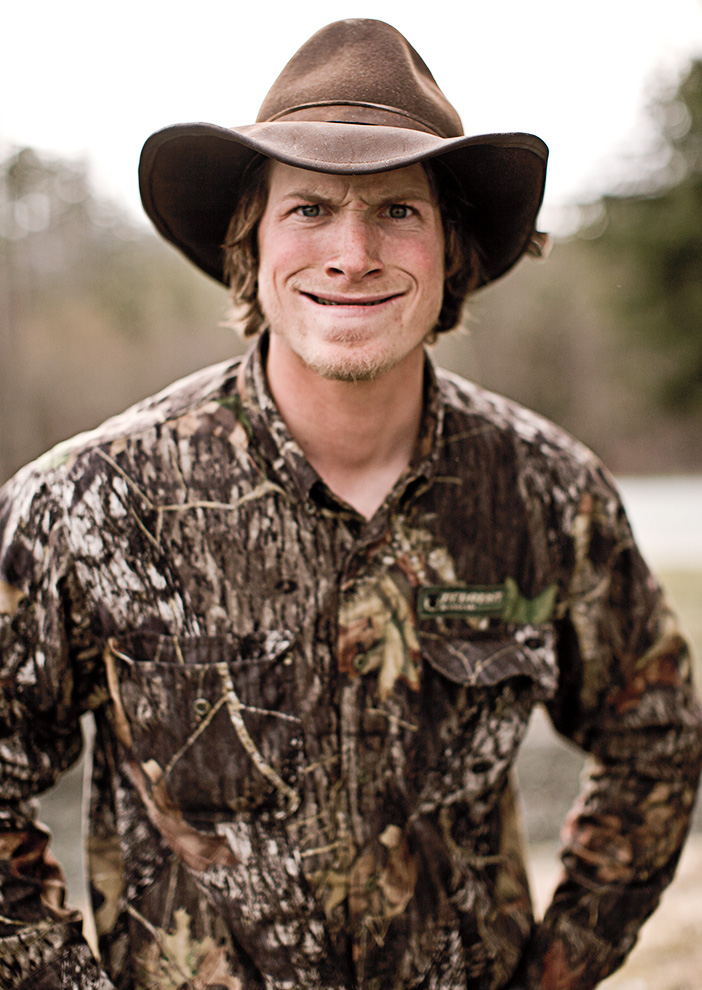 “I was in Haines, AK, in April of 2010 waiting out the weather with Ben, Brandon Cocard, Aaron Robinson, Kyle Schwartz and Mike Basich. We were kicking around town just looking for some things to do. Ben cracked this expression at some point and well, I stole a piece of his soul.” Photo: Jeff Hawe

And what does your mother do? She is an amazing lady; I have seen her on the slopes.

Yeah, man, she rips. She’s got a free spirit just like us. She kind of cruises around, gets a job here and there. She just got back from Alaska; she was working up in Denali National Park and now she is driving buses at Copper Mountain.

Did your mom start snowboarding after you?

My dad skied; my mom and I tried skiing about four times back in 1993 and my two brothers decided they would try snowboarding. I saw my middle brother do a front flip off of a cornice and I thought, “Man, I’ve gotta to do that.”  So we both started snowboarding—I think my mom even started a day before me.

You’ve lived in Portland. What keeps you coming back to Colorado?

It’s home. I’ll always end up back here no matter where I go.

What is the Blue Ox?

The Blue Ox is a 1974 Chevrolet pickup with a slide-in pop-up camper. I had it customized. We customized the pickup too—put in a big block motor, bored-out. It’s not exactly hot-rod material but it is a go-anywhere off-road machine. An off-roading home. 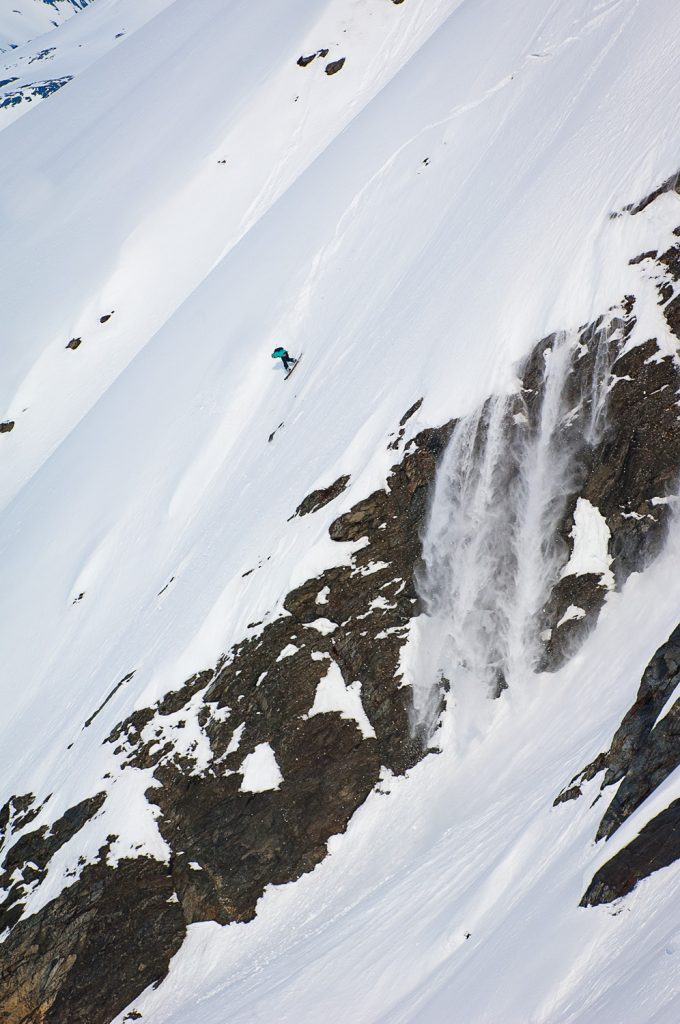 “The skies around the Valley of the Tusk in Thompson Pass, AK were beginning to go white on the horizon as a storm begin moving our way. Being 20 miles from camp and knowing the road home was riddled with terrain traps, we feared getting caught in a whiteout. Ben Lynch dropped off the ridge and made quick work of his last line of the day, linking a dicey top entrance and catching a peppered exit ramp back to the sleds. We turned our caravan of sleds toward home and had a smooth return, even having time to take in some amazing evening light as we topped out on the last saddle before dipping into shadows.” Photo: Reid Morth

You’ve got the freezer stocked and you’ve got some bros living with you?

Right now I got Mr. Tucker Andrews and Mr. Jackson Fowler. They’ve moved up here to experience the Grand Lakes, CO life, and they’re lovin’ it. I’m excited to have them in.

The last time I saw you, you had a little trinket in your front pocket. What is with that?

Oh man, I’m pacing around my garage right now, ’cause it’s comfortable but uncomfortable for me right now. So this one night in Denver they had a premiere for Apocalypse Pow, [Installite Films’ 2011 release]. Everyone was there, having a good time—everyone, y’know? We all ended up running around, bar to bar, door to door, and the next thing we know, we’re really drunk. Me and Tucker [Andrews] ended up doing some fisticuffing, which we do a lot. We just kind of box, you know, as friends. We’ll box, starting with open fists, and then you start to close your fists up when you have a little whiskey in you… we get going. We’re going pretty strong and I fell right into his punch—he hit me square in the jaw. I deserved it, ’cause I had gotten him like four months earlier, and thought I had broken his jaw. But he really did break my jaw this time.

I got surgery and got my jaw replaced. The doctor was like, “Alright, so this pointy thing up there, I think that’s a tooth.” And I said, “Is this a tooth, or is this a bone sticking into my tongue?”

A few weeks later, I was running a skidsteer and I was in the zone. I was playing with my tongue, ’cause I didn’t have anything better to do—or with the bone that was sticking out of my gums. Then, all of a sudden, this damn thing just fell into my mouth! So I stopped, and pulled it out and I took it in to the doctors and they were like, “Oh yeah, that’s bone, for sure.” It ended up being my jawbone just sticking through my gums the whole time. So that was my little trinket I carried in toilet paper. I still got it. 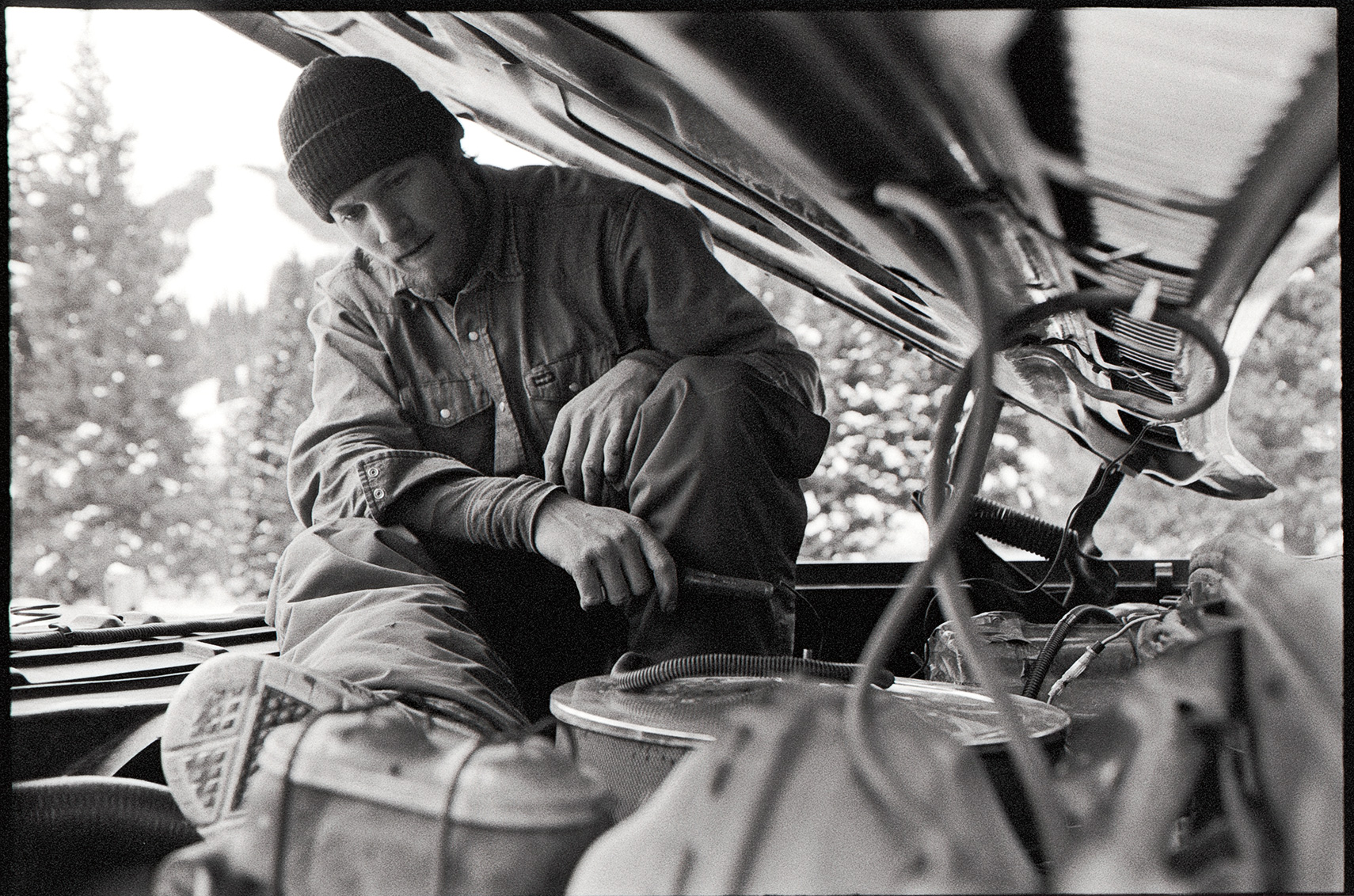 Lynch puts in work on the Blue Ox—last we heard he was camped out in his mobile home somewhere between Lake Tahoe and Mt. Baker, living off the land. Photo: Kealan Shilling

You and Tucker are still friends?

Let’s talk about your plans to winterize the Blue Ox?

In September, I felt the winter coming on here. It gets cold quick. This is what I’ve been wanting to do forever: put a mini wood-burning stove in my slide-in camper on top of the Ox. My girlfriend Jessie’s mom got me a $100 gift certificate for my birthday to Cabela’s. There aren’t a lot of things I want, but I went through Cabela’s and saw this sheepherder’s mini, wood-burning stove. I went online and I still had this hundred bucks. A hundred bucks! It was $170, plus shipping—so I got it. Boom. Bang. In the meantime, while it was being shipped, I yanked the refrigerator out of my camper and built a mini-fireplace with wonderboard and tile in place of that refrigerator. I cut a hole in the ceiling, and did it right, y’know, it’s all sweet and safe, so I don’t get asphyxiated. I even put a couple of carbon monoxide detectors in.

It only took a couple days to put it in. So we’re out, sitting in the driveway of my place—me, Tucker and Jackson. We smoked a little doobie and we tested it out. It’s phenomenal. I’ve been using it hunting and everything and this winter—boarding, camping, hiking, whatever you want to do—you can come back to a nice mini-sasquatch mountain-man cave with a little wood-burning stove. It’s amazing. You can cook on it, dude, it’s everything. Everything I ever wanted in my camper. 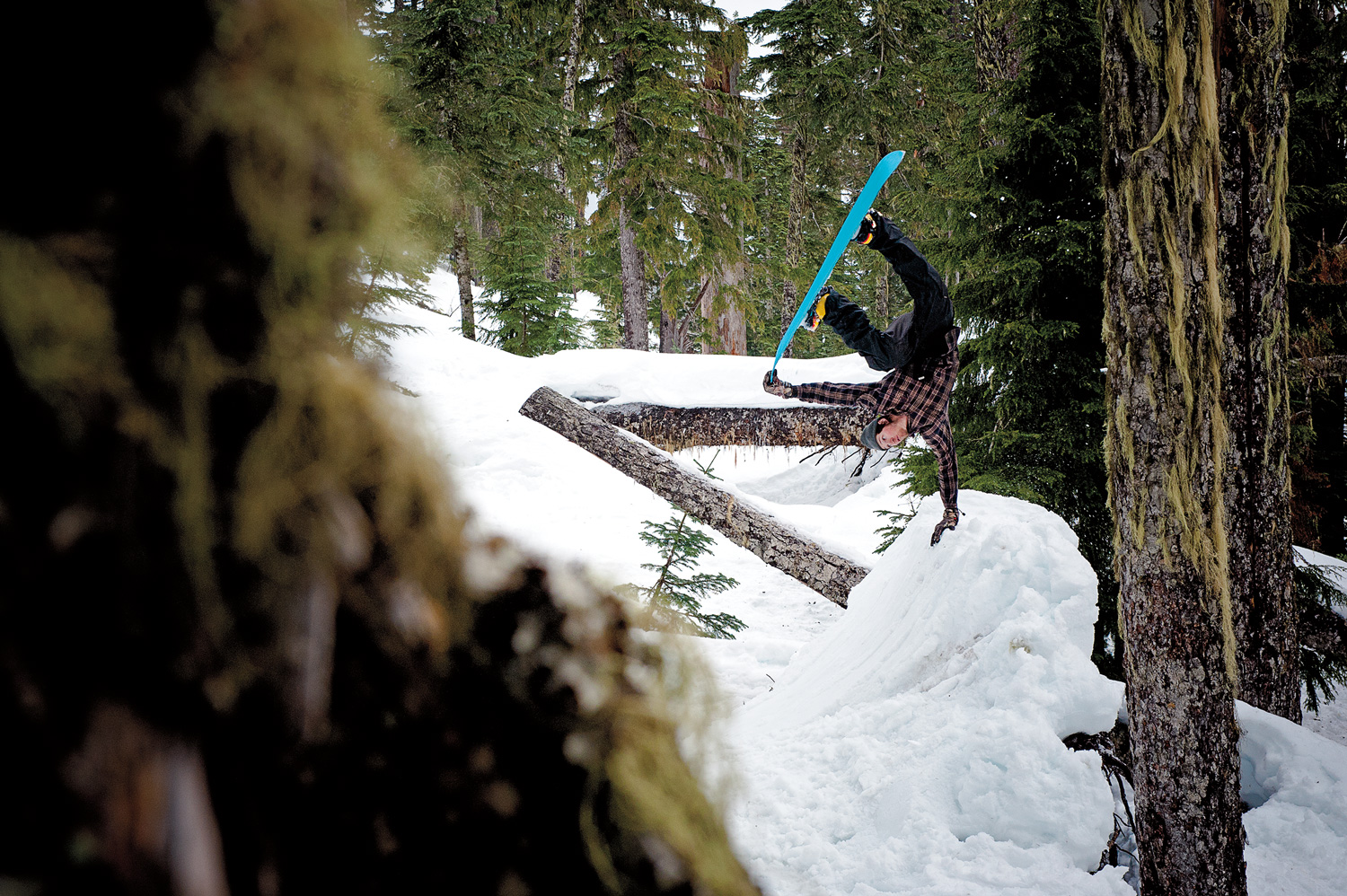 On a soggy Mt. Baker, WA day with the K2 crew, Lynch warms up with a handplant nose snatcher to get the session going. Photo: Meg Haywood-Sullivan

There’s nothing better than hopping in your mobile and freestyling freedom around the country.

For sure. What’s the game plan for this winter?

Powder, woods, fishing, hunting. Snowboarding. That is my goal for this winter. Camping, hopefully, by a river where I can fish, or somewhere I can hunt, but also full-time snowboard on powder.

That sounds like the perfect balance because you obviously want to ride powder, because it’s the best thing in the world—in the universe as far as I know—but you also gotta eat, so you might as well catch your own food to fuel the powder, and the powder fuels the stoke for the food. It’s just a balance, man.

Well, cutting down dead trees that are already there to fuel your fire after you’ve gotten cold snowboarding and fishing—it’s self-sustainable, man, but so many people talk shit about it. I think it’s what really needs to happen, in all honesty. I don’t know if that makes any sense, but it makes sense to me. Get back to the source, and let ’er rip.