“Mini ramp!” Jesse Burtner calls out. He drops, whips around a berm and pumps left over a skate bowl inspired mound towards a snow sculpted mini ramp with log coping. Gus Warbington follows, launching right off the mound into a transition that spines with the miniramp. From there he carves around its bowled corner and airs off into another nearby landing. Slightly uphill Josh Nucci flips off of a tree, then Matteo Soltane spins a short but poppy kicker. The jump was built by Russell Winfield two days prior, cleaned up for another afternoon of riding by Pat McCarthy and Matt Wainhouse this morning. This multi-generational spectacle is as hectic as it is heartwarming, a hand-dug improvisation of the creative minds now unleashing upon it. Although it was impossible to know exactly what to expect showing up to this spot beside the road on Snoqualmie Pass, WA, this is what Max Warbington envisioned Brain Bowl Session Four to be.

It all started with BRAIN BOWL, a movie that Max, filmer Logan Beaulieu and the Tre Squad put out in 2019. BRAIN BOWL featured their crew riding hand-dug features close to home in Bend, OR and highlighted the notion that eye-catching, pro-level snowboarding doesn’t always require big budgets or distant travel. It showcased the fulfillment and fun to be had wherever there’s snow, so long as you’ve got a group of snowboarders willing to put in the work to create something worthwhile. The Brain Bowl Sessions expand on the movie’s concepts, with weeklong opportunities for other riders to get in on it. “It’s about inviting all the people who are interested in being part of a cool video project to come link up, so we’re making a video together as a big community instead of out in secret as you normally would film a video,” Max says. “People get to come ride and shoot with pro shredders, amateur photographers get to meet Tim Zimmerman and talk with him and other pro photographers, it’s guaranteed we’re going to be filming, and you’re invited. It’s a great opportunity to get in on some culture and some action.”

The first and second Brain Bowl Sessions went down during preseason in Bend and the third was held at nearby Mt. Hood, OR. Tre Squad rallied riders by word of mouth and through Instagram. They did the same for the Snoqualmie session, posting location details to social media and encouraging anybody interested to come ride with them. The only requirements for joining in on the Brain Bowl Sessions are wearing a mask, socially distancing according to CDC guidelines, bringing a shovel and being ready to dig. “The digging is half the fun,” Max says. “When you have 20 or more people around it flies by and what you end up with is incredible. It’s a really accomplishing feeling. All the locations have been a short hike from a lot where anybody can come and park, so it’s fully free. Just bring a mask, give people space and be a nice, courteous person, and you’re good to go.”

Following each session Logan has pieced together edits recapping the DIY “events.” Some of the better boarding that goes down during each session will make it into the resulting edit but a lot of the hammers are being saved for BRAIN BOWL 2, which will be released sometime later this year. It’ll include footage from sessions one through four as well as the finale, set to go down at Mt. Baker, WA in late March or April. “We’re going to create a setup out in the Grandma’s [backcountry] zone,” Max says. “We’re going to do it big and then have it sit there for people to come hit up. We’ve been trying to encourage people to keep the setups going after we leave, to make it a place where people who don’t want to go to the resort can come shred.”

That aspect of the sessions has panned out, as locals continued to ride the pop-up parks Tre Squad created for the first two in Bend and Snoqualmie. Regulars were posting clips of the course there with a fresh blanket of snow days after the event. Who knows, maybe the setups all still going strong. You’ll have to do your own digging to find out. 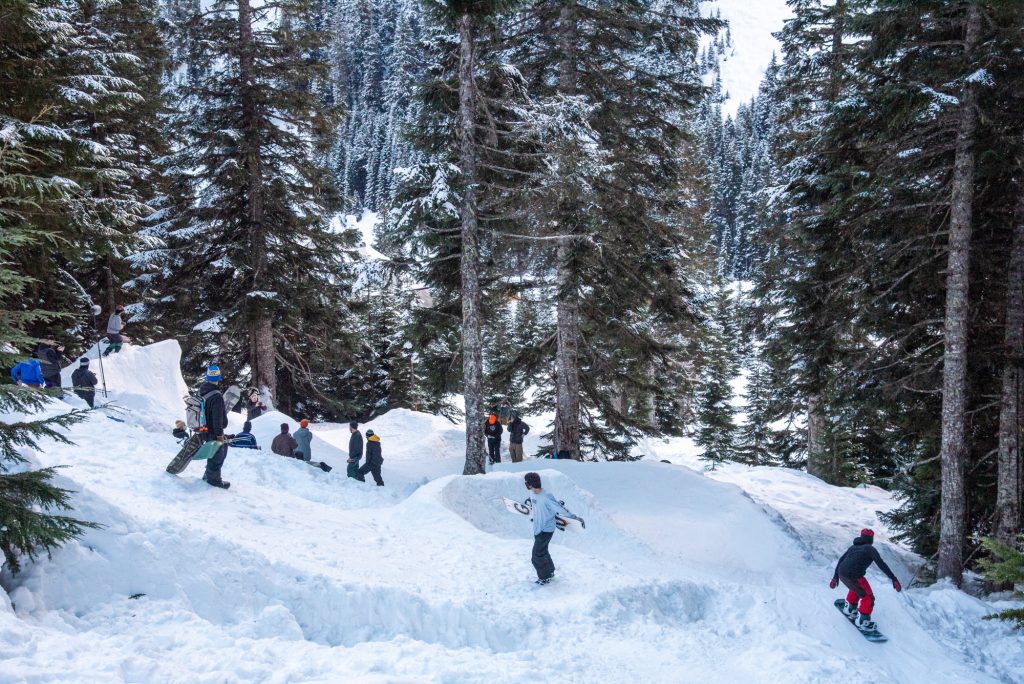 ABOVE  There are a lot of snowboarders who wouldn’t even bother coming to the mountains on days without fresh snow. Brain Bowl Sessions go to show the fun that can be had if you and your crew commit to building and riding a zone no matter the weather. Made evident through the first four sessions, the hard work always pays off. Photo: Ben Shanks Kindlon

Editor’s Note: Max mentioned that because the Brain Bowl Sessions are going even better than expected, there may be a bonus session thrown in the mix before the finale at Mt. Baker. Stay tuned to the @brainbowlsessions Instagram for updates. We’ll see you at Baker, masked up and ready to dig.