Harry Kearney credits wearing a helmet with saving him from a serious injury after an encounter with a rock several years back in Telluride, CO. Now he wears a helmet regularly. Photo: Colin Wiseman.

Dr. Jacqui, DPT is a monthly column where former pro snowboarder and Doctor of Physical Therapy Jacqui Berg offers advice for snowboard-specific training and dealing with injuries. For her second entry she’s provided some key insight on how to recognize the symptoms of concussion and what to do if you’ve sustained a head  injury.

Have a question for Dr. Jacqui? Fill out a contact form with the subject line “Ask Dr. Jacqui” and be on the lookout for your question in one of her upcoming columns.

There’s a foot of fresh snow, you get first chair and in your hastiness to ride the best line you catch an edge. You’re sliding down a sketchy chute and smack–you’re seeing stars. Fortunately, you didn’t lose consciousness and your friends are promptly at your side, confirming that you’re still in one piece and how gnarly it looked when you went headfirst into that tree. You feel out of it, but not really… What do you do next? Maybe see how you feel after a run or two, drive home?

The old school of thought when you bumped your head was to just walk it off and get back in the game when you’re feeling better. But over the past five to 10 years there’s been a larger effort to increase awareness and properly educate athletes about concussions and head injuries. This awareness has been seen primarily in organized sports like football and soccer, so it’s important that action sports athletes learn and spread awareness for their brain health too. As snowboarders we’re at just as high (if not higher) risk for concussions due to falls we take. Fortunately for most athletes who suffer a concussion, with proper management and rest, symptoms will resolve with no long-term consequences. 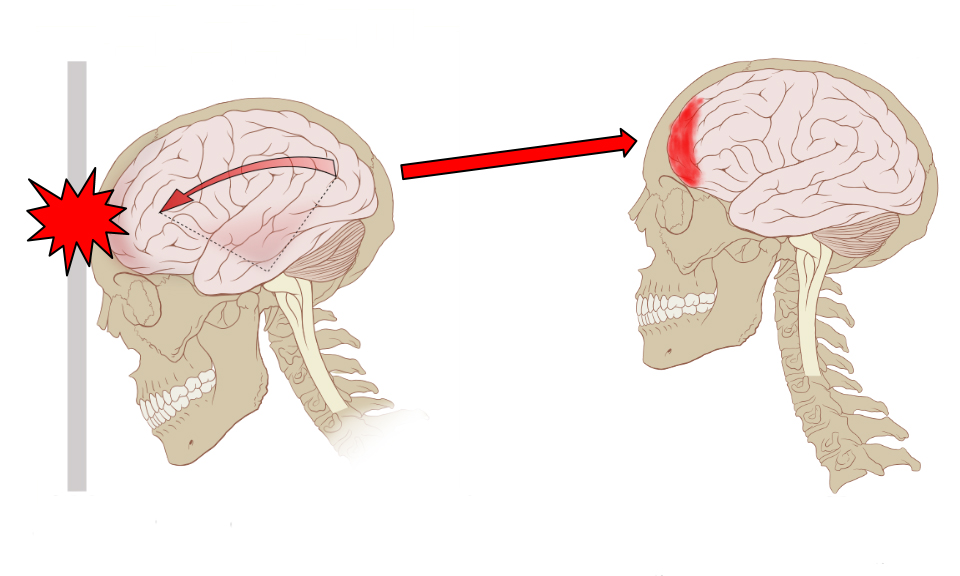 In Latin, concussion means to shake violently. A concussion is a mild traumatic brain injury (mTBI) that occurs from an impact or fall that causes a forward and backward, or twisting and side to side, movement of the brain inside the skull. Basically, it’s your brain slushing around in your skull, which can also occur from a non-impact force or even a heavy fall to your tailbone, like when you butt-check on the landing of a big jump. These sudden and forceful movements can injure sensitive tissues in the brain, causing a chemical change that may affect your general function. Because it’s a functional change, there usually won’t be visible signs of bleeding, bruising, or swelling, and an array of symptoms can occur depending on what part of the brain was injured.

Surprisingly, less than 10 percent of people who experience a concussion have a loss of consciousness. Onset symptoms may include effects to concentration, vision, orientation, balance, emotions and processing information due to the chemical changes occurring with the altered function of the neurotransmitters in your brain. The most common symptoms are headache, light and sound sensitivity, dizziness, confusion, visual disturbances, fogginess, imbalance, mood swings, memory loss and nausea, and the symptoms usually worsen with physical or mental work. 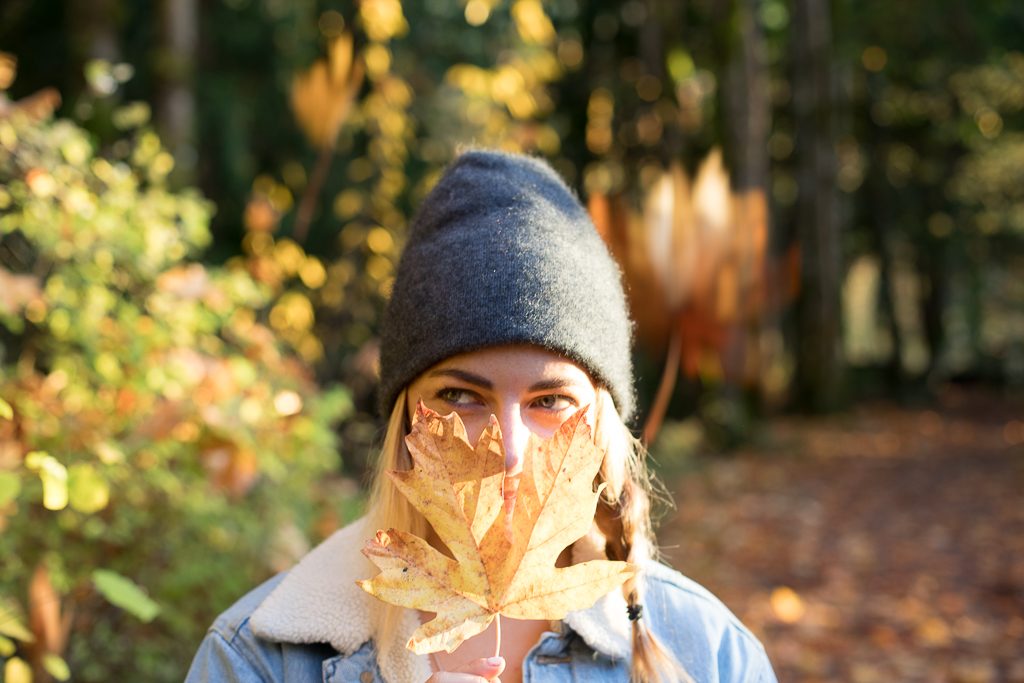 Pro snowboarder Leanne Pelosi remembers her concussed experience after taking a hard hit on a quarter pipe in New Zealand. “My vision started to degrade and people started looking like monsters, one eye small and one eye huge, and everything was completely out of focus,” she says. “I felt okay right away, but I had a gut feeling that I was going to be suffering, so I walked straight over to the first aid. It only took about 10 minutes until I started feeling ill. I felt out of it, like my head was in the clouds. I could not concentrate at all. All I wanted to do is close my eyes and be in a quiet place.” 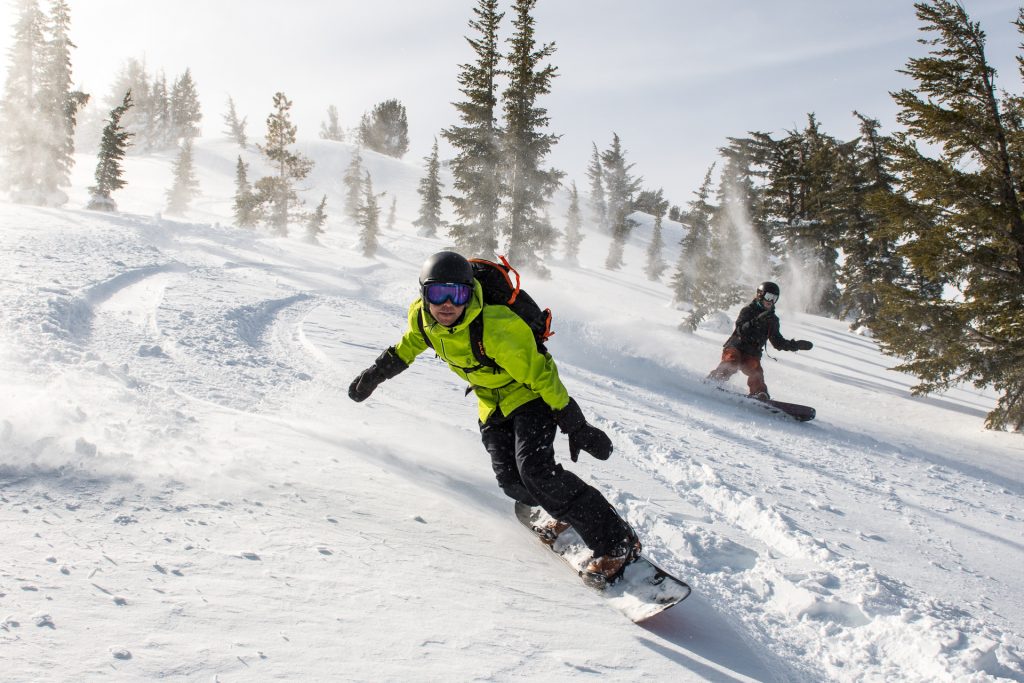 Surfer and snowboarder, Jennica Lowell, had her first concussion at age 7, and a handful more over the years that followed. But the worst concussion she suffered wasn’t a result of the biggest crash or heaviest impact–it happened playing around on a simple side hit at Mt. Baker Ski Area, WA. “I tried to shake it off,” Jennica says. “I was spinning, seeing stars, but I was able to ride into the lodge, drive home, and even go out with friends later. It wasn’t until a few days later that I felt the fog and knew I had a concussion, but this one was different. I was waking up at night to throw up. I cried every day, when I dropped a glass or had an intense conversation. I felt like a turtle without a shell and it made the basic routines of daily life very difficult for a while.”

From her experience Jennica says, “Listen to your body. When you feel like you’re taking it too far, pump the brakes a bit. It is better to step back and enjoy the ride than be unable to do the things you love for the rest of your life.” 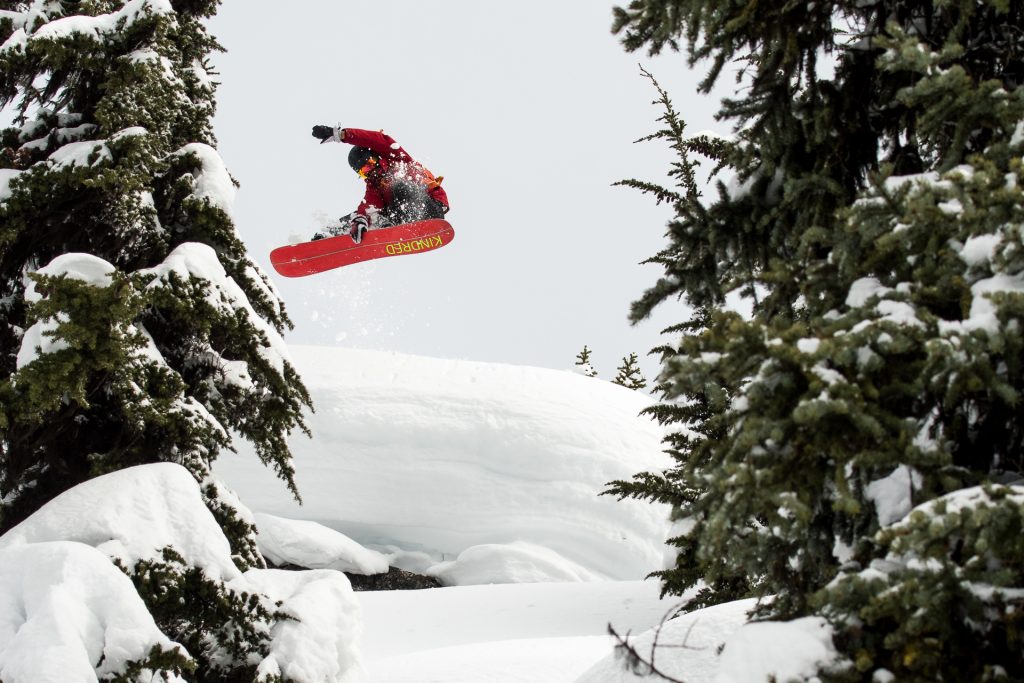 ABOVE Tamo Campos proves that if you’ve got enough style, a helmet can’t take away from it. Photo: Colin Wiseman.

If you’re with someone who’s just hit their head, see if they’re alert and oriented by asking them who and where they are, and what the date or time of day it is, to help you decide if you need medical help or ski patrol. Be prepared by keeping a print out of the Pocket Concussion Recognition Tool to help screen your friends (or yourself) who may be concussed.

Recovery from a concussion requires medical attention to ensure the person is safe and to screen for any further injury, with follow up if symptoms don’t resolve. Because brain tissue is healing, additional injury to the head while still concussed can lead to more serious problems, such as Secondary Impact Syndrome, especially in younger people whose brains are still developing. Seeking proper medical care will also help clear any other injuries to your neck or vestibular system that could be causing what seems like concussive symptoms. It may seem obvious, but get to the emergency if the injured person has a worsening headache, slurred speech, dilated or pinpointed pupils, numbness or tingling, or weakness in the extremeties–ideally by a trained responder to stabilize their neck if the injury just occurred. 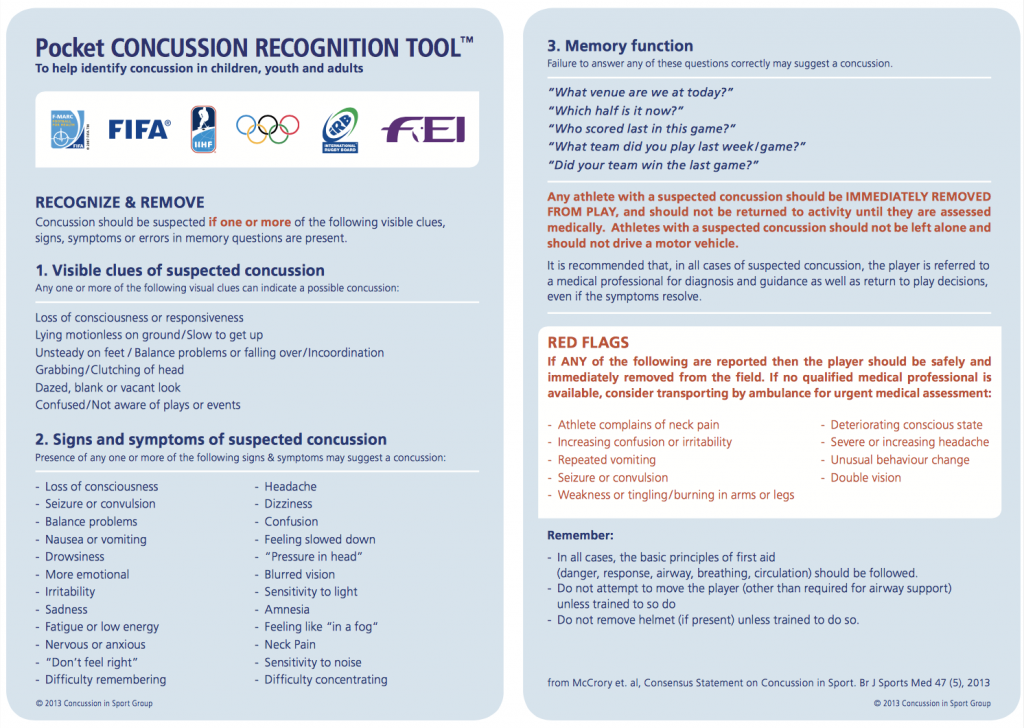 ABOVE The Pocket Concussion Recognition Tool by the British Journal of Sports Medicine.

The younger you are, the longer it’ll take to fully recover from a concussion. On average, adults usually recover in around three days, young adults in their 20s about seven to 10 days, while teenagers and younger kids can take up to three to four weeks to fully recover. There is no medication to treat a concussion, and specialized doctors advise to avoid pain meds and anti-inflammatories like ibuprofen.

Your brain needs physical and mental rest to allow the brain to heal itself. Exercising too soon after a concussion may overstimulate the brain and prolong recovery, so gradually introduce more activity only as you’re feeling better. It is also advised to avoid stimulants like caffeine and alcohol, as well as excessive amounts of time in front of screens, because electronic stimulation can have the same effects on your brain as physical exertion.

It’s okay to sleep after a concussion, but make sure someone is around to check on the concussed person during the first 24 hours. It’s normal to have sleep disturbances initially, so take naps as needed, but try to get back on a regular sleeping schedule sooner than later. You can ease back into work and school activities, but hold off on riding until you’re fully recovered. Be honest with yourself, and don’t be afraid to ask friends and family if you seem back to your normal self.

Wear a helmet to minimize risk of more serious head injuries. Helmets will not prevent concussions, but they can lessen the severity of head injuries and prevent disastrous accidents. The use of protective equipment can significantly decrease the rate of head, neck, and facial injuries up to 43 percent, but it’s important the helmet fits correctly. 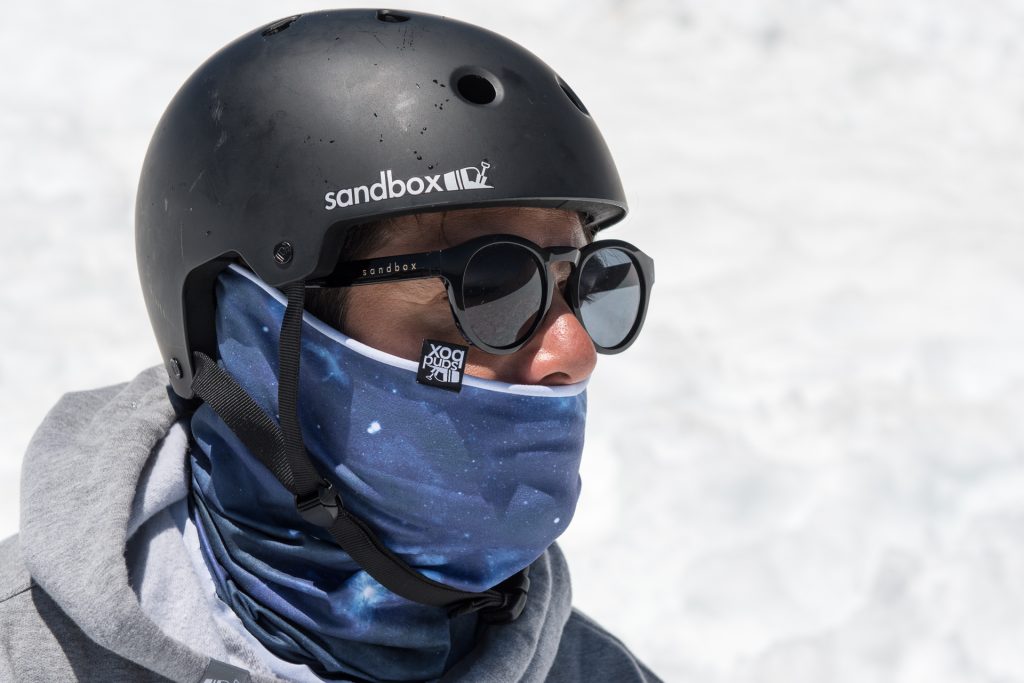 ABOVE Kevin Sansalone led the charge to make helmets a little more stylish through his company, Sandbox. Photo: Colin Wiseman.

“You have to have the right fit of course, and everyone’s head shape is different,” says Kevin Sansalone, former professional snowboarder and owner of Sandbox. “Most helmet brands have different shapes, depths and styles, so try on as many different models as you can before you buy. If it’s too loose, then it will bounce around and won’t work properly if you have a crash. If it’s too tight it will most likely give you a headache pretty quick. And finding a helmet that suits your personal style is always nice.” Kevin thinks that if you like how your helmet looks, the more likely it is that you’ll always wear it while riding.

“It’s fairly easy to determine the correct size by using a cloth measuring tape or a piece of string,” Kevin says. “Once you have this measurement you can check the sizing chart of any brand and match it up with their helmet sizing. Each brand may be a little different so triple check the measurements before you buy if you’re ordering online.” 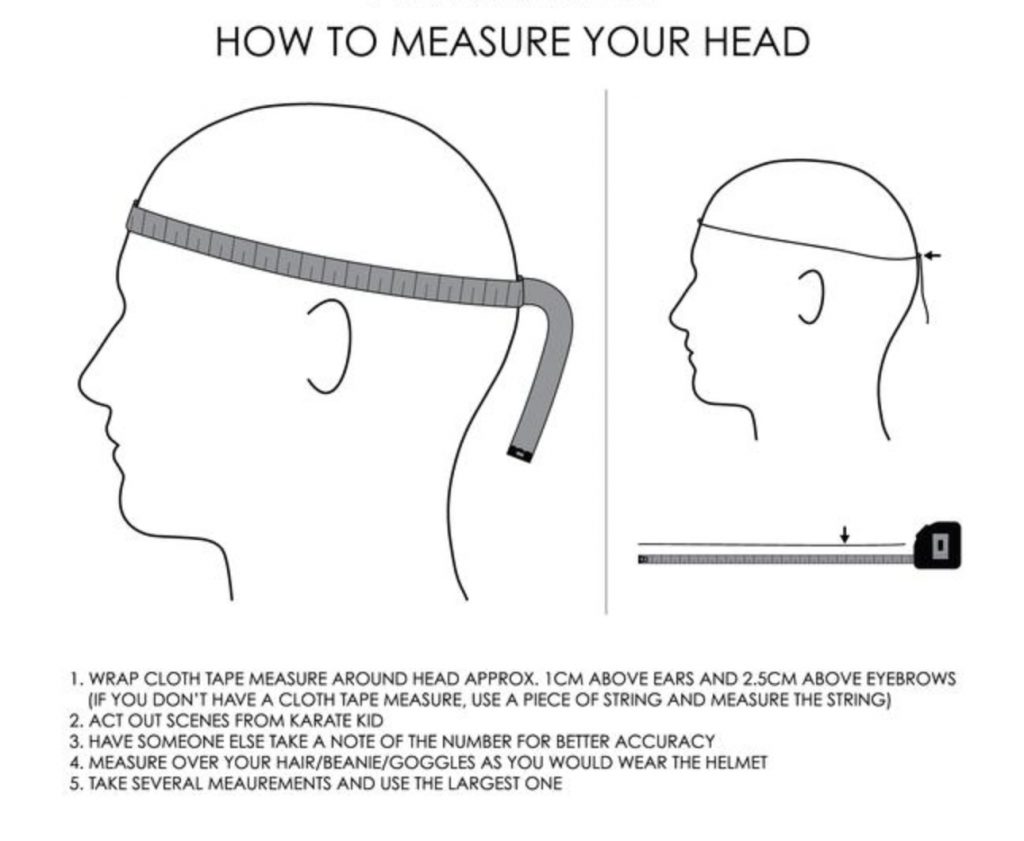 ABOVE How to measure your head to find the correct helmet size and fit. Note that step 2 is imperative. Image provided by Kevin Sansalone/Sandbox.

Leanne says, “Get a helmet and wear it. I wear a helmet full time in the backcountry, and I’ve had concussions with helmets on. It doesn’t mean that you can take extra risk, but they sure will help with reducing the impact to just one area of the brain.” 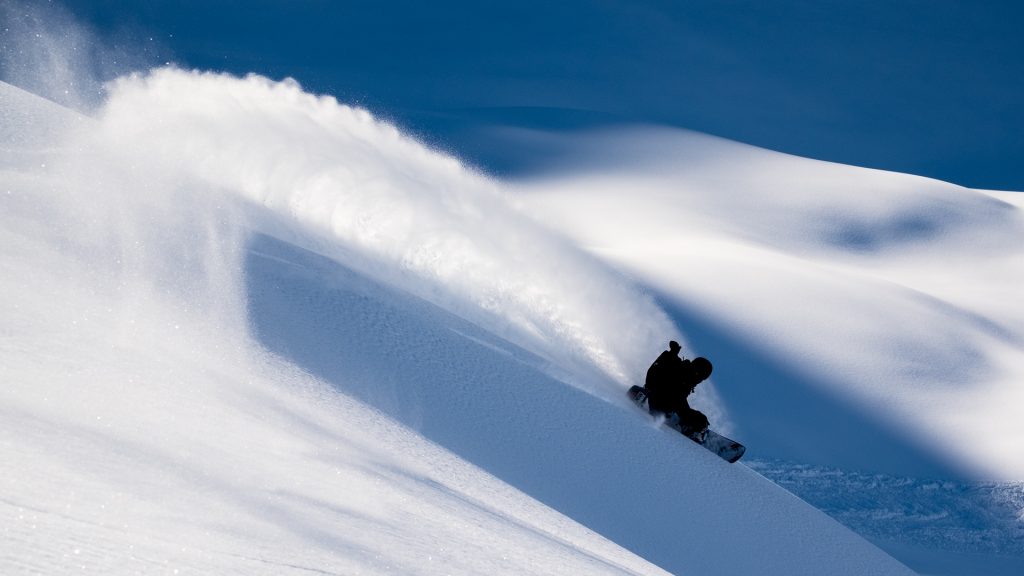 Centers for Disease Control and Prevention: HEADS UP Program

Dr. Jacqui Berg grew up riding Mt. Baker and The Summit at Snoqualmie in the 90s before going on to snowboard at a professional level, competing in Big Air and Slopestyle events and filming video parts with Misschief and Runway Films. Jacqui developed an intrigue with sports performance, rehabilitation and injury prevention, which led her to pursuing a Bachelor’s in kinesiology at Western Washington University and then a Doctorate of Physical Therapy from the University of Washington. After graduating with honors, she moved to Bellingham, WA where she practices physical therapy with a focus on sport specific therapy and injury prevention.

Have a question for Dr. Jacqui? Fill out a contact form with the subject line “Ask Dr. Jacqui” and be on the lookout for your question in one of her upcoming columns.

Disclaimer: The contents of “Jacqui Berg, DPT,” such as text, graphics, images, and other material, are not intended as a substitute for care from a physical therapist or health care professional. If you experience signs or symptoms of an injury or other medical condition, you should seek the advice of a qualified health provider with any questions or concerns. Use the advice here at your own discretion and risk.