Matt Patti respects the power of first impressions. That’s probably why he dresses sharp—often in all black—and keeps his big beard so finely trimmed. His meticulous attention to detail comes in part from nearly two decades of working behind-the-scenes in the snowboard industry, over which time Matt has risen the ranks from shop kid to warehouse worker to Vans Global Category Manager, with plenty of positions in between. Throughout Matt’s journey he was testing every piece of gear that he could get his hands on, eventually leading to making his own. Nowadays he’s working with a team of likeminded rippers at Vans Snow producing badass footwear that meet a fine balance between function and fashion, and more notably serve as options that will help keep money circulating within our sideways-standing community instead of outside of it. A few of these options are getting major upgrades soon, too, to better serve snowboarders needs off the mountain. To bring it a step further, Matt and his team have been creating some footwear that snowboarders never even knew they needed, least till they saw it. 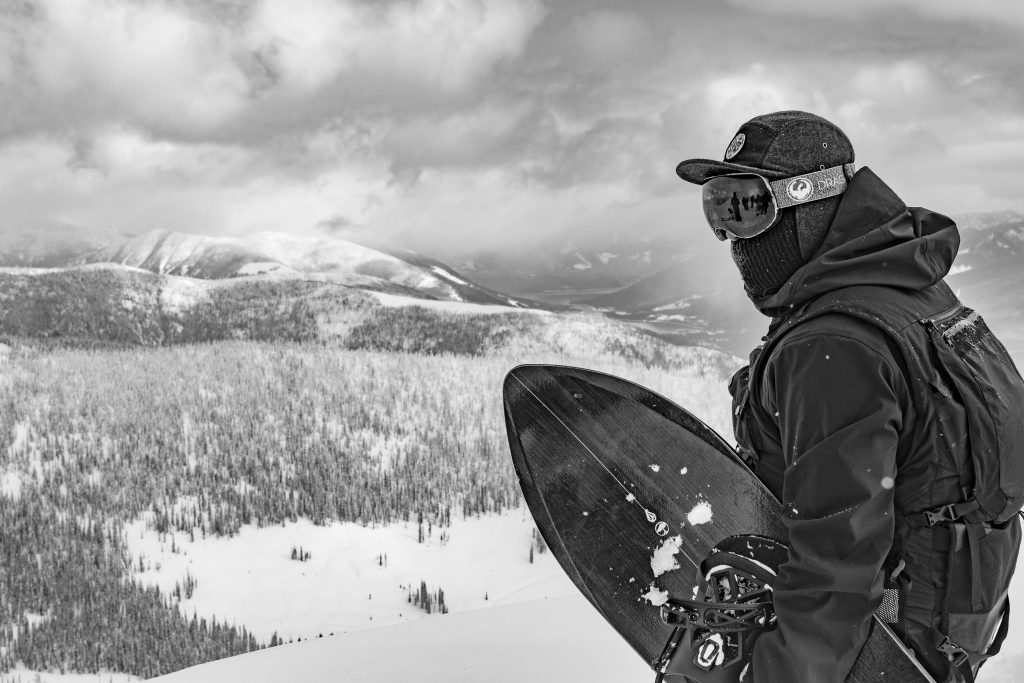 ABOVE Matt Patti at Baldface Lodge, BC. Photo: Dustin Lalik

Humble beginnings would be a good way to describe Matt’s first step into working in snowboarding. At 15 years old, he picked up at a job at the 1,500-foot Alpine Valley Ski Area in Geauga County, OH. “Alpine Valley was an active landfill until the ‘50s,” he says. “When I found that out years later, I was like, ‘Oh yeah, that’s exactly what it is: a total dump.’ Now that I know that I can physically see where the trucks were dumping trash.” Although not exactly a destination resort, Matt loved Alpine Valley. “I learned some foundational stuff there,” he explains. “First, I learned that I had a real, deeper interest in snowboarding. And second, I felt like I had finally found my crew. High school is all weird and cliquey and I never really felt like I had a spot in it. Snowboarding was the first place I felt like I had really experienced a community sense of belonging.”

Alpine Valley is also where Matt discovered his fascination with equipment—boards and bindings in particular. He’d frequent board shops around the area just to drool over their stock, often returning to do it again before they’d even brought in a fresh shipment. “I was studying the base info cards on snowboards, learning about tip and tail lengths or how ramping and profiling effected how a board interacts with terrain. I was trying to understand from a design standpoint what informed different kinds of performance outcomes.” 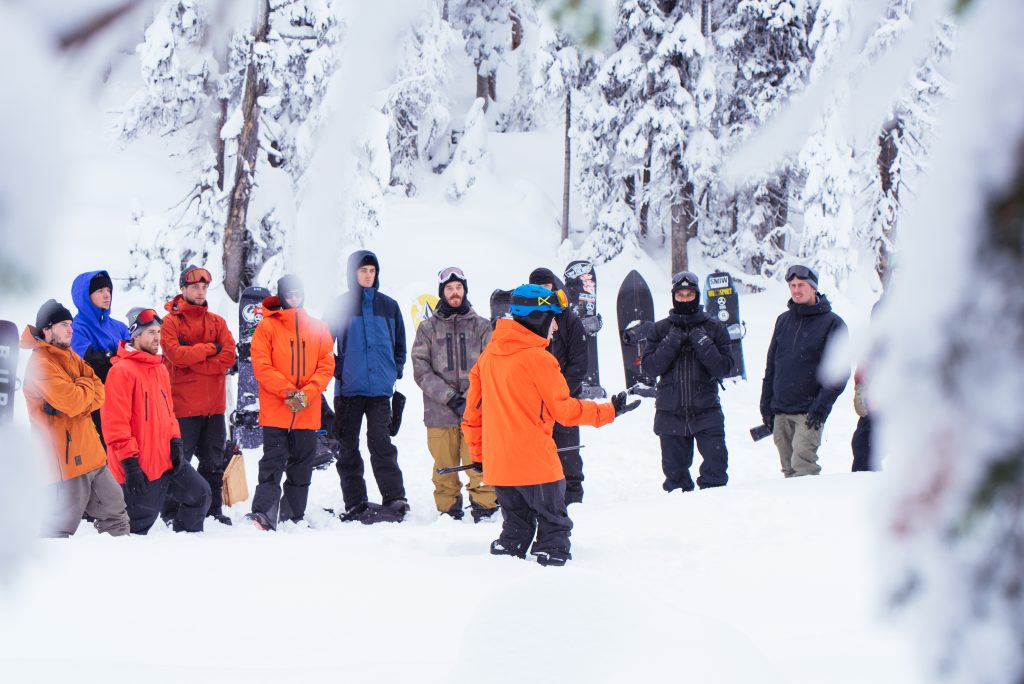 ABOVE Matt Patti (second from right) stands with an all-star crew at Baldface Lodge, BC amid an avalanche safety course taught by the legendary John Buffery. Photo: Dustin Lalik

Following high school Matt found his first job in the industry packing boards for Arbor Snowboards. After earning his Bachelor’s in history from Humboldt State he joined the product development team at Arbor in 2007, later becoming Brand Manager in 2014. By the end of his 11-plus year stint with Arbor, Matt was at the top of his game—even leading the design and development efforts on Arbor’s entire line of snowboards—and had zero intention of leaving. “I loved my job, I was stoked,” Matt says. “But one day, as I was on my way to China to work on bindings, I get this email from Vans. It said, ‘We’re opening this position soon, are you interested in having a conversation?’ I said, ‘I am,’ and that’s how I got to Vans.”

Matt joined Vans in 2016, during a challenging yet exciting time for the snowboard boot program. In 2014, Vans failed to deliver snowboard boots to market amidst a factory shutdown that affected their supply chain and the program going through a rebuilding phase. Upon arrival Matt’s first order of business was to integrate a reimagined vertically tiered product system which subdivided individual snowboard boot components into respective product levels. This new system standardized product platforms within the collection, allowing Vans the ability to deploy technology subsets into larger sets of products in a more competitive manner. The goal and end result were a product line that was simpler to understand from a retail level selling perspective and consumer buying experience. Through coupling appetizing videos such as LANDLINE. (2018) with an easily digestible overhaul of their product, Vans Snow struck cultural chords and amplified its positive resonation with core riders. It all felt like it was made for snowboarders, by snowboarders. “An endemic connection is mandatory in these situations,” Matt says. “If you aren’t really connected with the community, how will you know what the community is asking for? 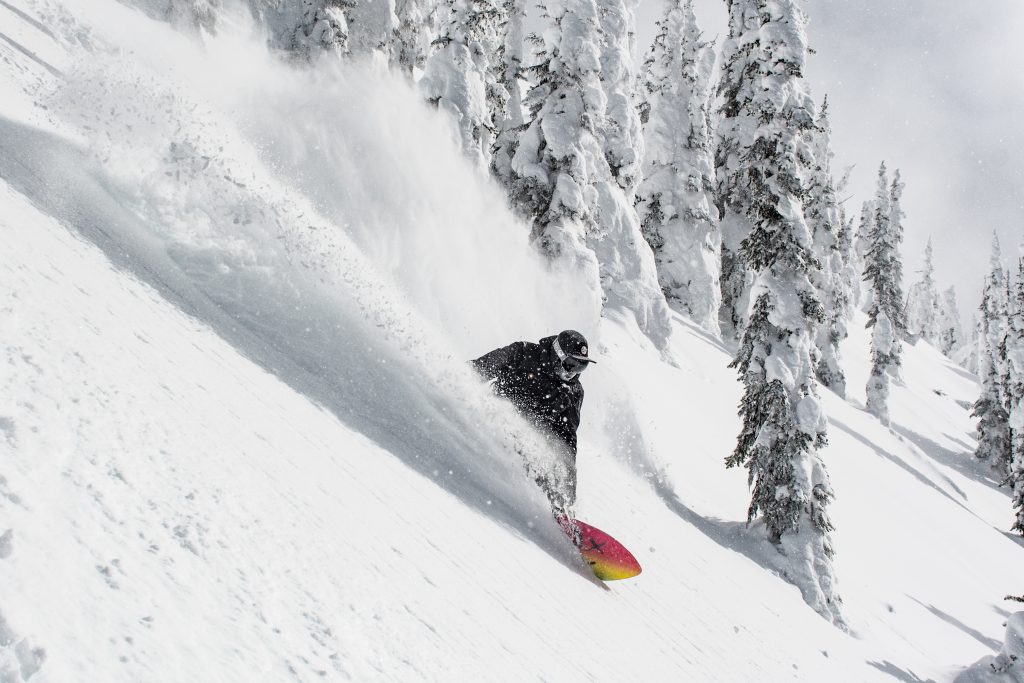 ABOVE Matt Patti going left at Baldface Lodge, BC. One would be hard-pressed to exhibit on-board poise like this without also knowing a thing or three about snowboarding and, in turn, what a rider really needs. Photo: Dustin Lalik

Once Vans’ new line architecture was in place as a structural foundation, they were able to start focusing on building up. The first hurdle was figuring out what could be reasonably achieved in a single development cycle–a big move that would positively impact the entire collection of boots. “Adding key new models or redesigning current hero styles is important to line plan advancement for sure,” Matt says, “But we thought ‘What can we do right now that will begin to reset the consumer expectation of what snowboard boots from Vans are all about? How do we make the best possible first impression with potential users? The answer was comfort, and to meet that we needed to completely rebuild our liner and footbed program focusing on comfort as a pathway to performance. That’s where our mantra ‘Elevated performance through elevated comfort,’ evolved from. We put a lot of energy into that idea and decided that performance is defined by whatever capacity it’s relevant to each individual on any given day. It could mean you’re riding with the homies and want to be on your game or it could mean competing and needing something that’s capable enough for that environment. But performance can also be, ‘I need to be out with my kids all day and need my gear to be comfy and warm.’”

The snowboard boot liners saw sweeping changes. Vans redesigned patterns to avoid rub points and hot spots, and adjusted foam packages around the toes for improved articulation to allow for better blood flow and subsequent warmth. They reached out to their VF partners for some key technology crossovers. The North Face came in with FlashDry™ material on Vans V3 liner, which is engineered to act like a second skin by pulling moisture to the surface and eliminating it as fast as possible. Smartwool supported the V2 liners with Merino wool materials which actively maintain a thermoregulated microclimate inside your boots. When it came to footbeds, the team at Vans knew it was important to offer something that was designed for all-day comfort but also provided ample impact absorption, chatter dampening and a performance-oriented stance. “The end result of our R&D work there was PopCush™, which is a proprietary blended and poured PU material that is now Vans performance footbed and is also used in Skateboarding and BMX shoes. That was a really big turning point for us. It was a series of streamlined changes that made a big difference in both first and lasting impressions.”

In addition to revamping their snowboard boot lineups Vans Snow began producing footwear for the snow community to use off-hill. They recently released snow and winter specific boots such at the Standard family of products, the Lodge Slippers, and UltraRange EXO Hi Gore-Tex™ MTE-3 which is equipped with breathable waterproofing, a 3MThinsuale™ package and all new all-terrain outsole. “The winter boot program was a very reasonable product extension from where we already were and something all of us experienced personal needs for. We took more than 25 years of snowboard boot know-how and dropped it down just a little bit,” Matt says. “We deconstructed the concept of performance-based protection from the elements and turned it into something that’s more wearable on an everyday basis. Sure, you could get winter boots and slippers from non-endemic brands. But they never looked cool, and that money was leaving snowboarding and not supporting our community.”

Recently Matt was designated to lead an internal team tasked to further improve the increasingly popular products within the Vans MTE lineup, which is all about to get juiced way up come September 2021. “Everything in the new MTE line is being rebuilt with a commitment to three key promises: moisture management, thermoregulation and traction,” Matt says. “It’ll be a multi-level, vertically tiered line architecture, just like we have on the snowboard boots: MTE-1, MTE-2 and MTE-3 + Snow MTE specifically designed for cold and harsh winter weather conditions. Each different product level has varying degrees of zonal thermal insulation systems, either Primaloft™ or 3M Thinsulate™. For waterproofing we’re working with Gore-Tex™ or HydroGuard. We even built a proprietary all-terrain rubber compound called All-Trac™ for the level two and three outsoles.”

ABOVE Vans Mountain Mule MTE are the slippers you never knew you needed, least till you saw them. Matt describes them as “The fashion statement your homies wish they made first.” The idea for the Vans Mountain Mules came during a trip to Chile, when one of the crew members slipped in an icy parking lot on his return to the hot tub. The fall left him with a sprained ankle and enhanced slippers were quickly deemed a necessity, for anything less was clearly a safety hazard.

From a snowboarders-supporting-snowboarders standpoint, this MTE line is significant. Riders spend a lot of downtime in conditions that warrant waterproof footwear, but not necessarily snowboard boots. The MTE line provides options for snowboarders to maintain their style and, more importantly, keep their money within snowboarding. Footwear options like these could even goes as far as to bring money into snowboarding from folks who don’t even ride—especially if they’re are being purchased at a local board shop. “One of the great things about Vans is that it’s our community’s brand,” Matt says. “It’s not an outdoor brand, it’s not a ball-and-stick [sports] brand, it’s a board sports brand, pure and simple, through and through. When you buy these products—things that were outside of our realm before—it’s awesome to no longer have to disconnect from the lifestyle and the community in that way.”

Like Matt, so many of us in the snowboard community found our first sense of belonging here. With that in mind, it is pretty dope to avoid having to disconnect from it on any level, whether that be fiscally or stylistically. It’s an all-encompassing approach bred from endemic connection—one that helps push our culture both behind-the-scenes and center stage. It’s that kind of approach that will keep our sideways-standing economy growing and our feet looking sharp. The latter is crucial, because first impressions are important.