We’re all tourists, though we may scoff at the more obvious of our kind. Travel, novel surroundings, the siren-song of the open road; every committed snowboarder I’ve met holds these things dear. We’re even tourists at our home hills, excited to see our favorite features under a fresh coat of snow, or mobbing to the mountain on the umpteenth powder day of the year. The views mid-bootpack on the Arm at Mt. Baker, a violent red sunset after a day on the rope in the Midwest, or the jagged peaks of the Canadian Rockies can stop even the most jaded of boarders in their tracks. 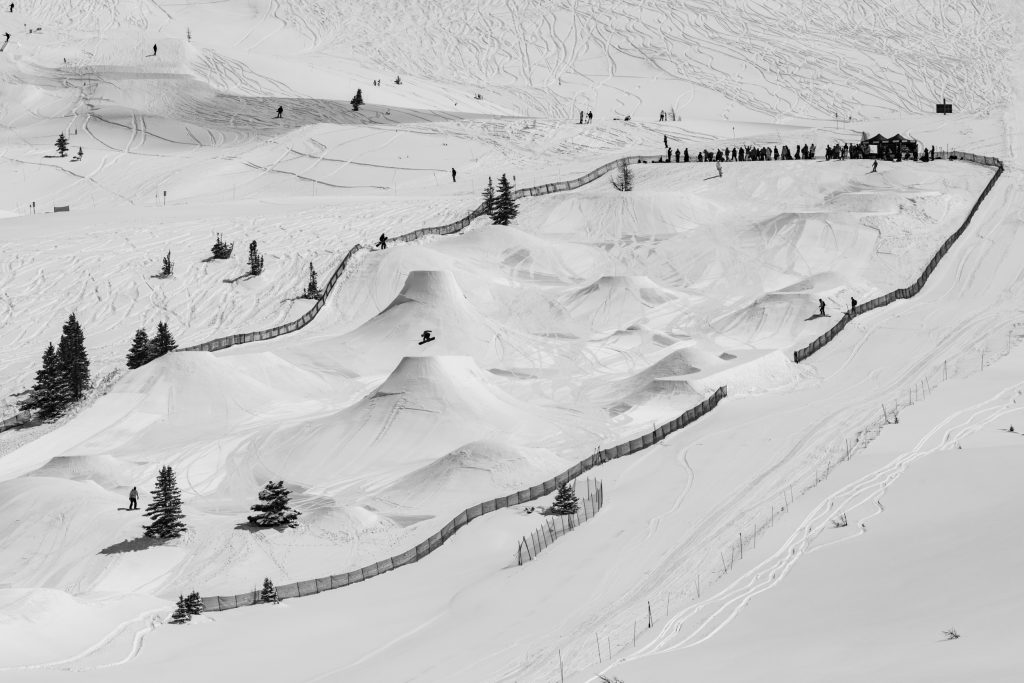 So it was with this sense of adventure that snowboarders from across the globe convened on Sunshine Village, Alberta, Canada for the 9th iteration of Snowboy Production’s Holy Bowly. This spring pilgrimage has become a beloved tradition among our sport’s most die-hard practitioners. From pro to flow, industry heads to shop kids, and enough lenses to cover every conceivable angle; Bowly attracts a wide swath from our dedicated community.

Krush and crew truly “crushed” this one as well, with some of the biggest features in Holy Bowly history, paired with unique and flowy lines. The build process for this frozen work of art took a full week. Snowboy and Arena Snowparks used a combination of groomers, heavy machinery, and old fashioned hand shaping techniques for the final touches. With riding days from April 25th to the 29th, boarders were able to fully explore this avant-garde interpretation of a snowboard park, and push themselves and the features to their absolute limits.

Multiple high-speed quads serviced fantastic groomers on the way to the course, and a late April pow day had people exploring further afield. Rumor has it that a few brave souls even took on Sunshine’s infamous “Delirium Dive,” a gated double-black requiring avalanche gear and a serious disregard for fear. Inside the course, people were chucking carc left and right, and hiking to the absolute end of each day. Raking, and slipping, and chatting, we discussed the feats of the session and our plans for that evening.

Sunshine Village is a stone’s throw from the town of Banff, AB, and the whole area actually sits inside eponymous Banff National Park. We looked for “bowlers” strolling the tidy streets on our way to dinner every night. They stuck out like sore thumbs among the high-end shops, restaurants, and lodges. For the residents that welcomed this circus into town, the experience was mirrored. Their home turned foreign; riding impossible new features on a run they’ve taken a thousand times, and maybe/possibly/likely witnessing some after-hours debauchery at their local watering hole.

Above: Matteo Soltane, Brayden Charette and Miles Freelan taking the dive into delirium.

Outside the luxurious Fairmont Banff Springs Hotel a bronze statue stands. Depicting the former President of the Canadian Pacific Railway, William Cornelius Van Horne, its base is adorned with his quote, “If we can’t bring the mountains to the tourists, we will bring the tourists to the mountains.” Holy Bowly brought a bunch of boarders to western Alberta, and I can’t honestly say that the views or the hiking or the shopping would have done the same. And yet there we all were, pointing cameras out our windows, pulling over to pose in front of the giant “Banff” sign, and sipping craft cocktails with everyone else. I have to think Cornelius would abide.

Huge thanks to Krush Kulesza and the Snowboy Productions crew, Sunshine Village Ski Resort, the town of Banff, and all the riders, photographers, and videographers who made this event so special. We can’t wait Holy Bowly 10!