It’s 10 a.m. on a Thursday in the back half of April and Krush Kulesza is standing alone on-slope at Timberline Lodge, OR. A couple riders are just starting to trickle in for day four of 2021’s Holy Bowly. Yesterday was a big one. Temps in the 50s, light wind, soft snow. A full speed assault on the 8th Holy Bowly, a flow park through the trees off Timberline’s Stormin’ Norman chair. The layout is inviting: a couple of sharp-edged craters from and center, hip options to the left and right, undulating down into a series of hips, rollers, and a tall, volcano-esque structure at the bottom. It fits the local landscape well. Today, the wind’s blowing a bit more. Folks are sleeping in. But the snow’s soft, the features pristine, having been groomed by 200-plus in attendance the afternoon prior, as they are at the end of every day.

Holy Bowly is a community-driven event by design. The Snowboy Productions crew puts in the hard labor up front, although all in attendance are expected to contribute. And they do, with enthusiasm. From sales managers to media folks, top-level pro riders to up and coming groms, it’s an eclectic mix, a cross-spectrum of snowboarding’s finest who can all appreciate and interpret this creative blend of transition.

Krush likes to draw to metaphor of free-flowing jazz, and it’s an apt comparison—there are some baseline standards to both the Bowly build and the act of riding a snowboard, but the beauty often comes from the improvised high notes. And this year’s Holy Bowly, an uncertain gathering on the back end of a season during which very few gatherings took place, stands as a creative celebration of a reuniting snowboard community under sunny Oregon skies.

With a few minutes to spare, we duck behind a maintenance shed to roll tape with the front man of Snowboy Productions. 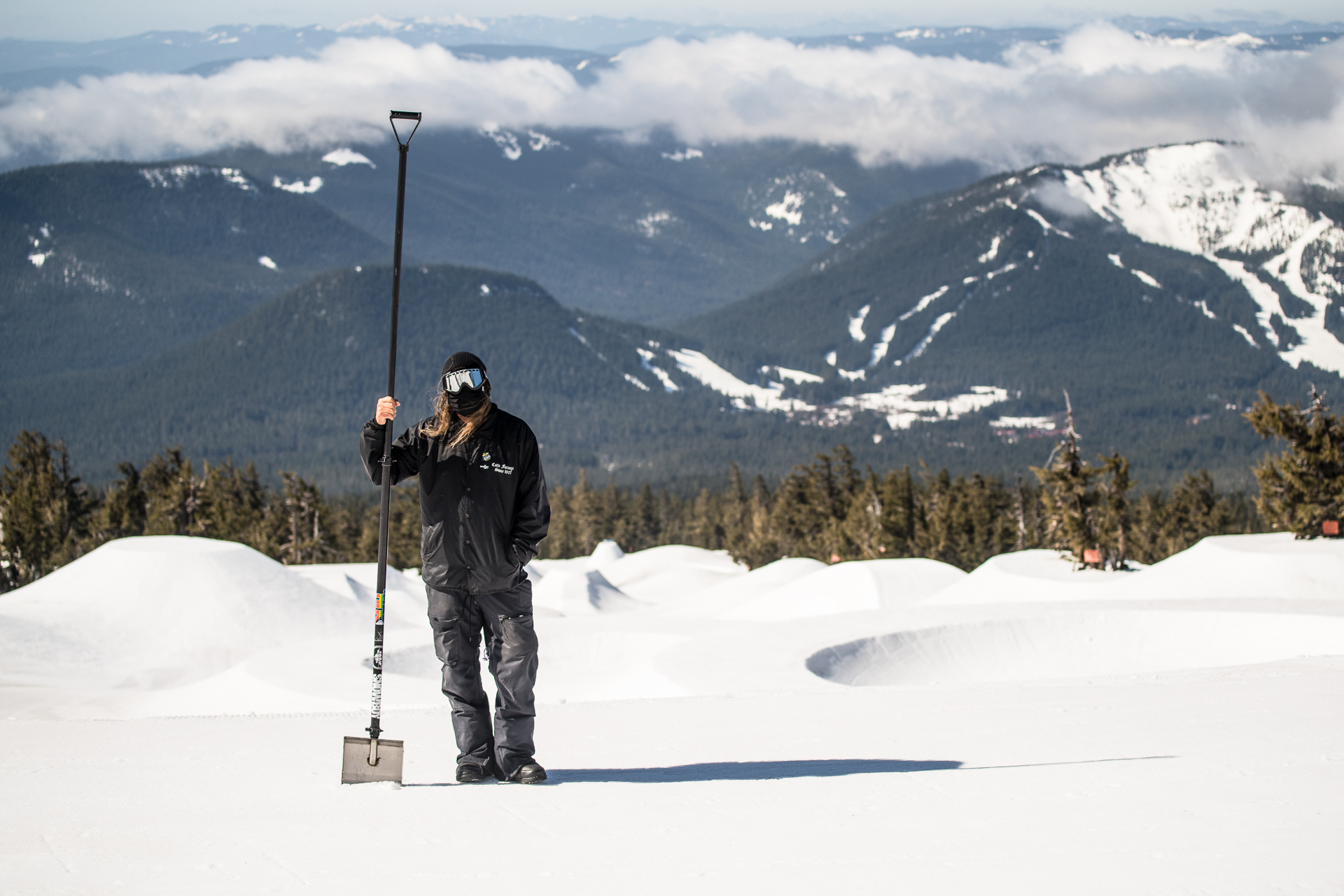 The Snowboarder’s Journal: Can you tell me about the lift to make Holy Bowly happen this year?

Krush Kulesza: The Road From Ruin Tour, this year, was definitely the most challenging year that I’ve done in 24 years of Snowboy Productions. All year long I was planning backups of backups of backups. Every event always has a lot of little things that get thrown at you, but we didn’t have this location locked in for Holy Bowly until maybe the second week of March.

We were supposed to go back to Sunshine Village [AB] last year, but everything got shut down in March [2020]. We were hoping we’d be able to go there but obviously the Canadian border was closed and Timberline [Lodge] really bent over backwards to be able to host us on short notice.

We had to cut the invites down. There are usually 350 or 400 people at the Holy Bowly, but this year was a hard cap of 200. We’ve been masking up, being as intelligent as possible, and finding ways to make sure everything runs smoothly.

For this event specifically there have always been a handful of non-negotiable rules. It’s pretty laid back and you can do a lot of stuff and keep it loose, but you can’t walk up the transitions, you have to show your wristband, and you have to dig at the end of the day. Wearing a mask is one more thing for me to yell at people about [laughs]. The culture was already kind of there as far as following the few rules, so everybody’s been fantastic. It’s always been up to the participants to make sure things run smoothly, you know?

How long did the build take?

It took eight days with a few snowcats, one excavator, 12 hand diggers, and 8-10 hours of work per day.

Do you come in and rough it out with the heavy machinery then do the hand tune? How does that process go?

It’s never drawn out ahead of time or anything like that. We get to the area the first day and figure out what we want to start with. Then we get the cats in the first couple of days and push materials to the different zones. A day after that, the excavator starts following the cats down. Then, a day after that, the hand crew goes down. We just follow each other all the way down the hill. For this build it was really windy and really warm, so every feature was rebuilt three times because every day stuff was rotting out. It took a ridiculous amount of hard work over eight days. 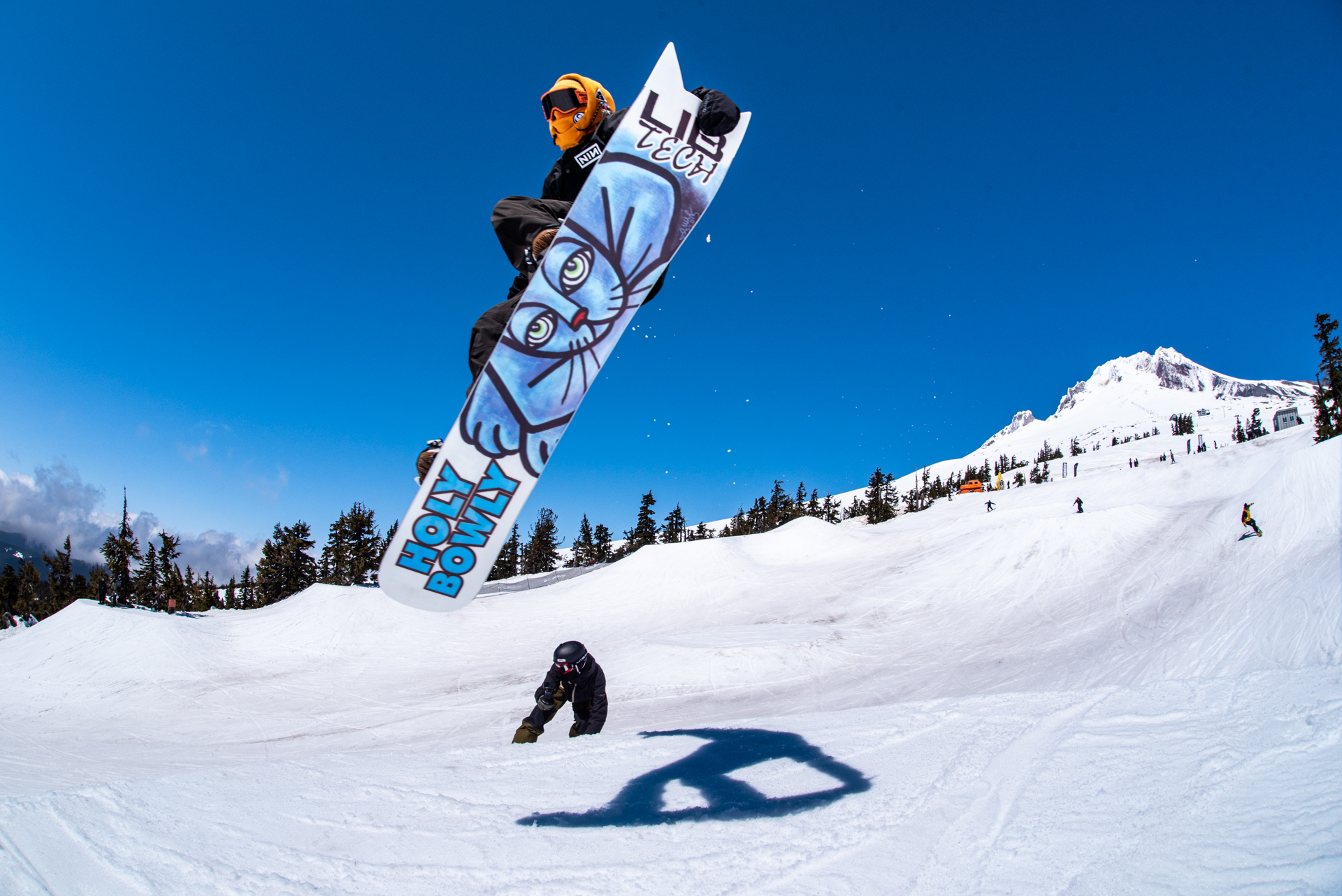 As far as designing the course, do you draw a little roadmap or is it more like a creative flow?

A bit of both. We’ve been doing this for a while now and we have a Greatest Hits of Bowly features. We’re like, we’ll take this feature, but what if we add this other thin

g on the backside of it, it’ll be fresh. You have to work with the features and grade of the run. You could drop everything into a CAD program but when you get to the location, you’d probably have to throw everything out the window anyways, so we just have 10 or 15 different types of features that we use and then apply different variations of putting them together to create something unique.

The creative part is fun. I love showing up here without any diagrams and putting it all together. You build one feature and then you go below it and see where the line would take you out of the feature, what would work for the next feature.

To me, there are two sides of a freestyle build like this. There’s the Audi Nines side where everything is just completely, perfectly built and designed ahead of time. They do a fantastic job. And then there’s this, the Bowly—it’s like jazz, where you make it up as you go. I think they’re both amazing and are the top of both sides of the spectrum.

I like the jazz analogy. Did everything work as you envisioned it? Have people surprised you with their approach to the course? There are all these weird gaps and I wonder if you guys consciously built those or if sometimes people find transitions where you didn’t intend them to exist?

For this build, it was more predictable. The run we built on this year was the skinniest we’ve ever had, but with half the people, it’s worked out well and hasn’t gotten too blasted. This one has been a little bit more predictable, I guess, because the footprint of the zone is smaller. This year, the line selection has jumped out, and the trick selection on different features. My whole theory has always been: Make really creative features, invite really creative riders. We’ve been having a blast the whole week watching everyone’s interpretations of what we built. Jazz week, right? 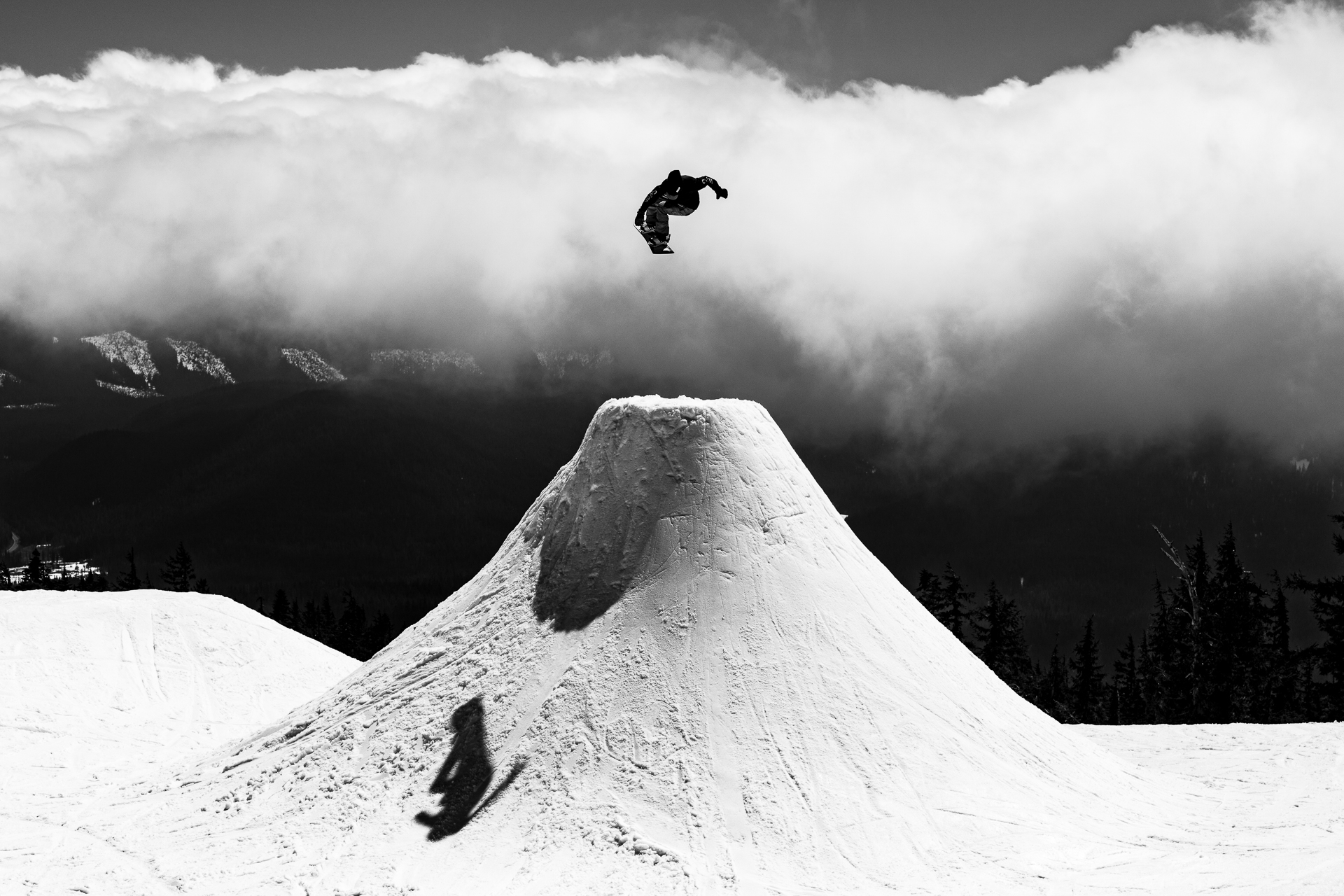 Is that why you do it? What keeps you ticking?

I just dig it. Look at all these people—are you kidding me? I started Snowboy Productions in ‘97 and now, you look at this lineup of riders and there are people I idolized coming up, the next generation of riders who are going to do the most amazing things for snowboarding, and it just feels so good to be a part of it. The feedback is so genuine and so positive. I’ve always felt that doing this is what I have to do. To me, it’s snowboarding. Snowboarding has given me everything I could ever ask for. And if this is my way to help give back to that and keep it going, it’s more than worth the effort. 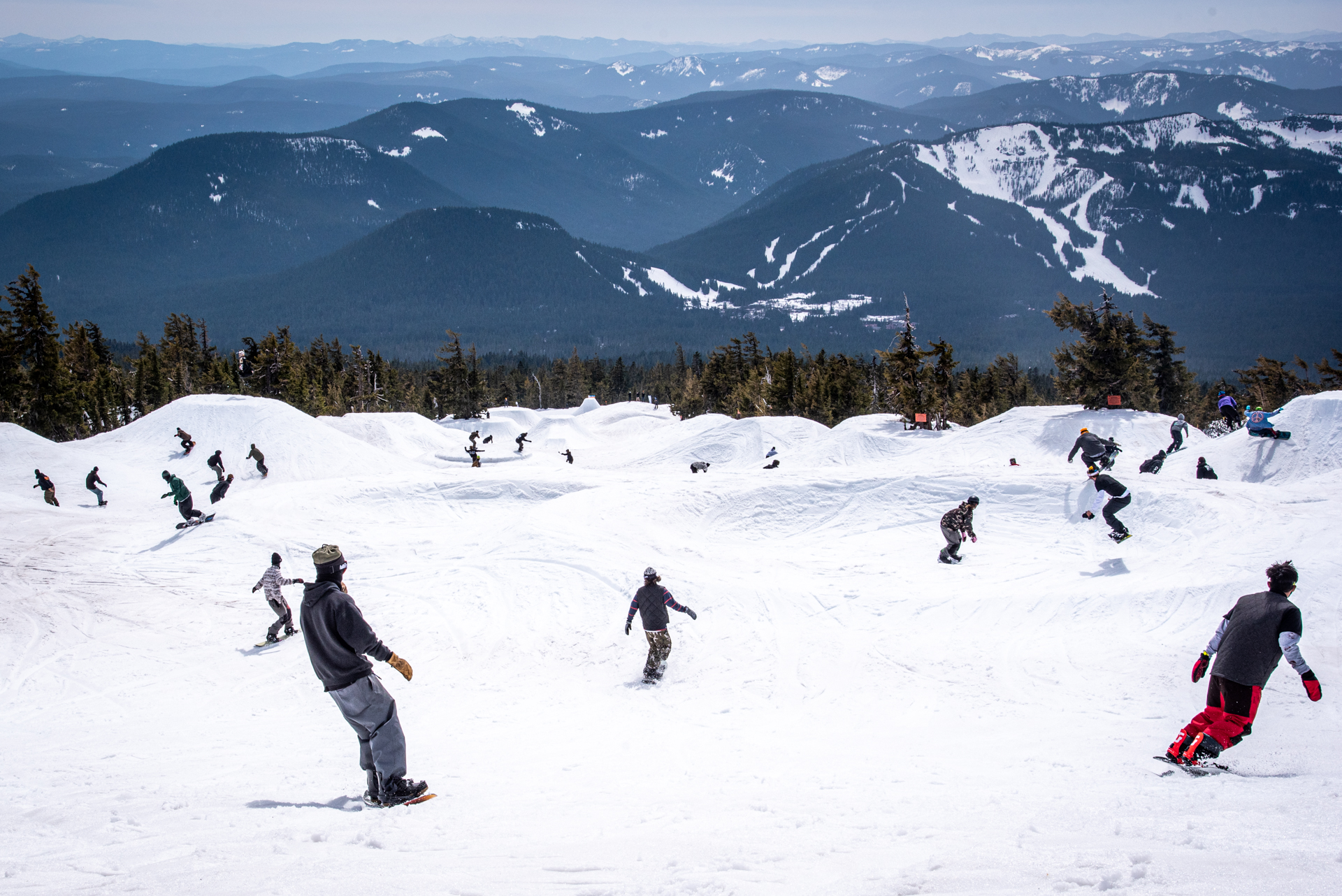 To conclude this year’s gathering, Krush sent all riders in attendance down party wave style, all in loving memory of Jaeger Bailey and Chris Larson—two legends who will not soon be forgotten. Photo: Ben Shanks Kindlon