It’s early morning  and bitingly cold in the high country of the southern Utah desert. A recent weather system stalled overnight above the three-mile-wide amphitheater at 10,000 feet, delivering more than a foot of snow. Feeling awakened and charged from the drive south, I pull my boots on and pack my backcountry gear quickly in anticipation of riding a new location. We know our window is short—down here in the desert, there’s rarely enough snow to ride on this red rock maze of hoodoo voodoo. It’s real-life folk magic and we can’t say if or when it’s going to be good again. 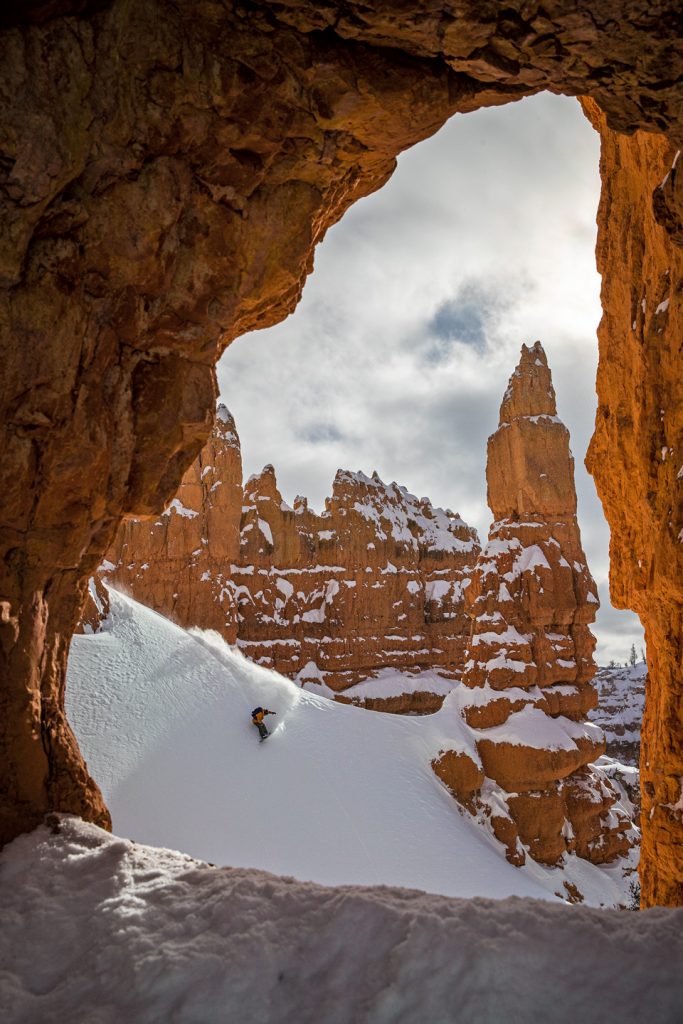 I listen closely to the hypnotizing sound of my splitboard in motion. Gliding, skating, each stride bringing me farther across the plateau. The morning sun reflects pixelated light rays off the snow, warming my body. Cliffs and steep mountains made of soft, sedimentary rock extend far below me, interlaced with hoodoos that jut into the sky.

The Paiute people say the hoodoos were formed by the Coyote God punishing the Legend People (To-when-an-ung-wa). The Legends were notorious for drinking all the water and eating all the food the animals rely on to make it through hot summers and cold winter months. Coyote, the trickster, petrified the Legends, turning them into these stone columns. The geologic forces of weather and erosion have worn them away to the point that they now just look like towers of rock and no longer like statuesque cursed beings, but they cast forceful shadows on the fresh blanket of snow. With respect to the desert lands and a deep consideration of the Native tradition, I seek permission from the gods in the sky: Please don’t put a spell on me and turn me into a stone. Let me ride freely, leaving this place for others to experience the magic. 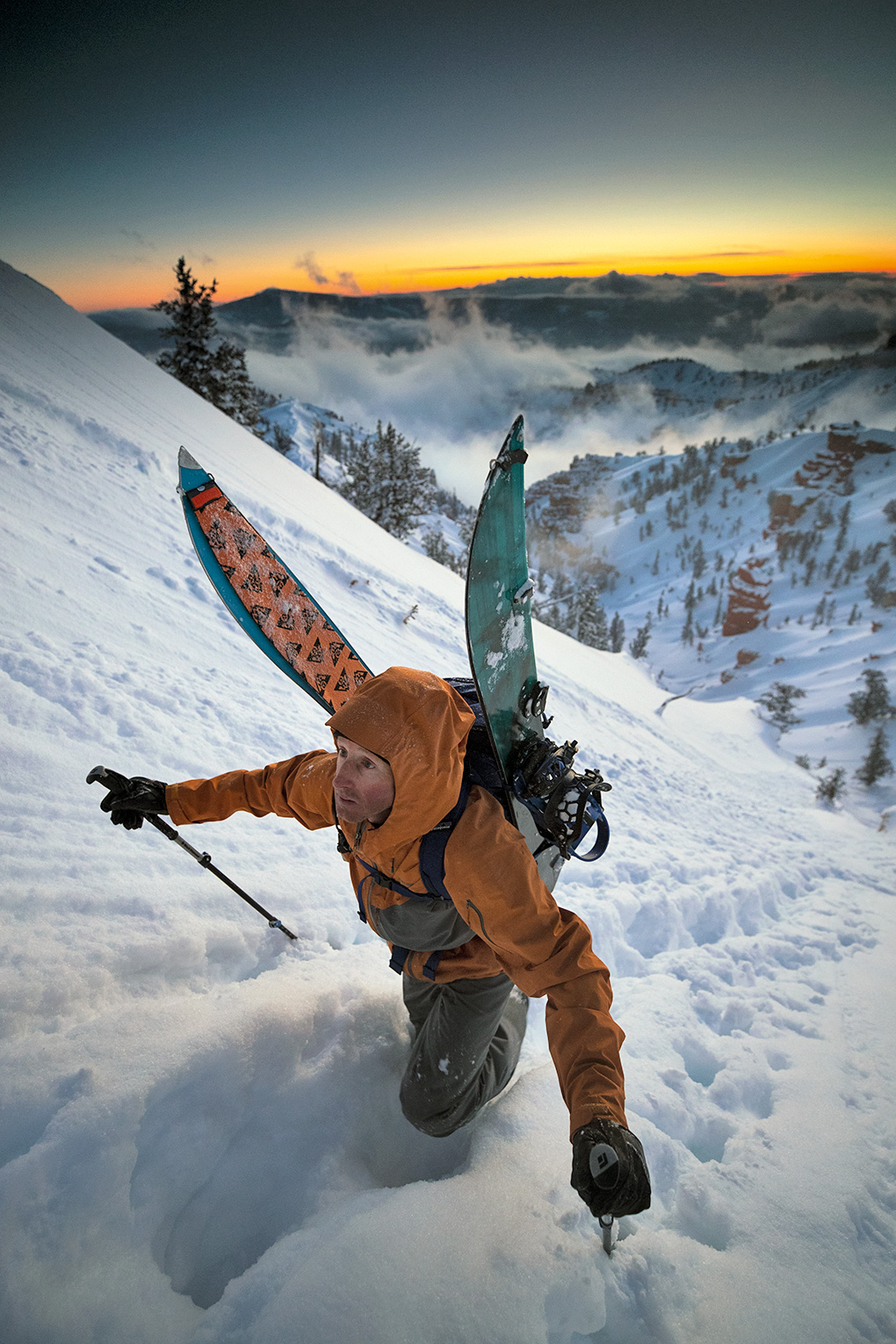 Dropping among the Legends, each turn leads into the next toward remote red canyons. My mind enters the now. I bob and weave between rocks, working the high points, airs, moving faster, then slowing for a few shark fins popping out of the snow. The three feet or so of fresh, dry powder is just enough to cover the rock-and-sand mixture, making it feel bottomless. Small but manageable point releases pick up speed here and there.

Delicately, I continue down the rabbit hole, skinning back up, finding new lines. After a full day of new discoveries in this prehistoric playground, I stop to change over my board underneath one of the few juniper trees occupying the landscape alongside some pines. The sun and clouds dance, my heart beats like a drum, and I search for clean lines.

It’s growing late. In the last moments of light, I lay down a couple more drawn-out turns. Ascending the natural amphitheater for a last time, stars emerge overhead, beginning their great waltz in the sky. 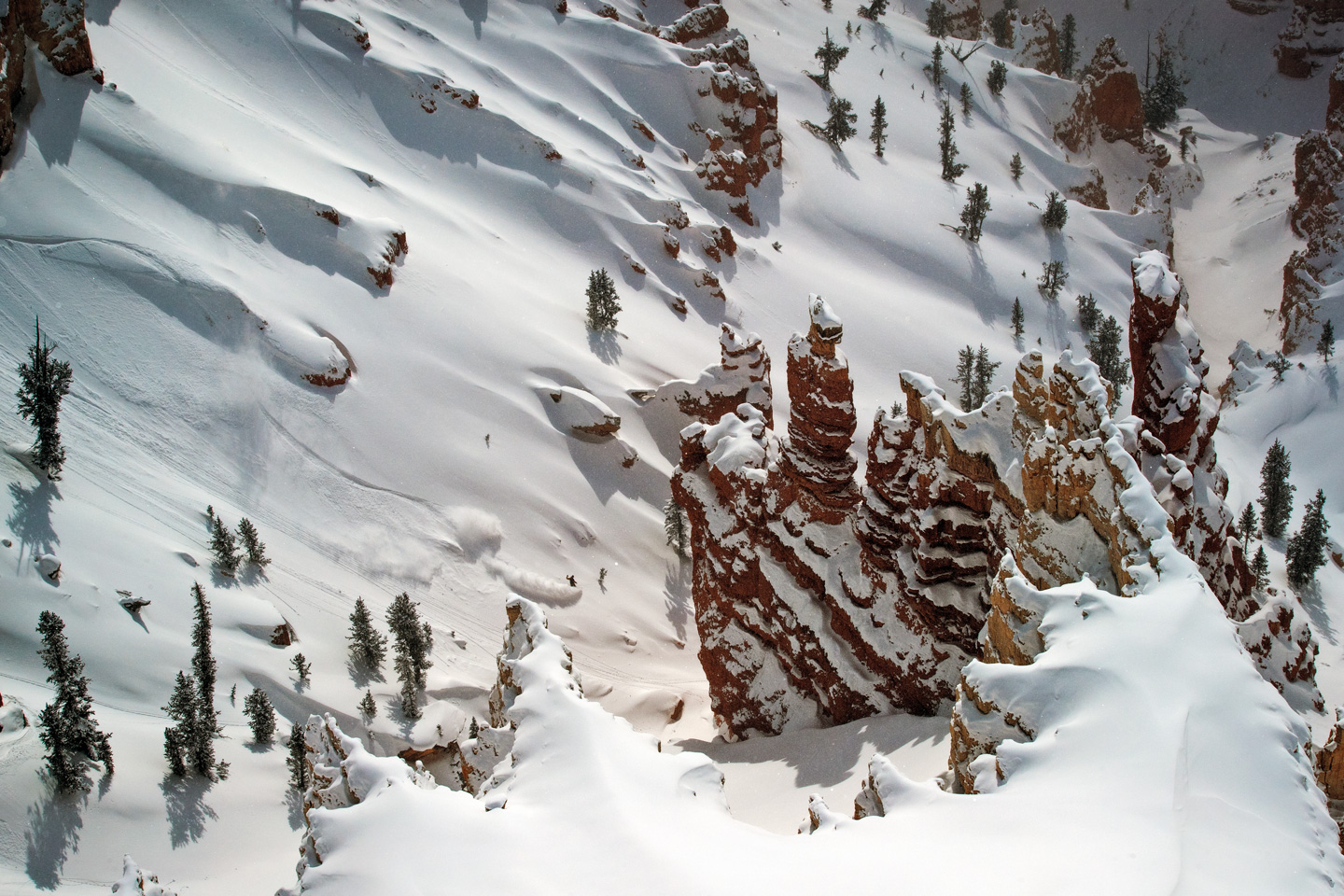 This article was originally published in Volume 17, Issue 3 of The Snowboarder’s Journal.