ABOVE: Gigi Rüf and Elias Elhardt contemplate one of the small lines we built during our first few days riding the ruins. Too bad I had black-and-white film in my camera, because the sunset was looking pretty promising.

This feature was first published in The Snowboarder’s Journal Issue 15.3. Click here to purchase a print copy.

The road narrows with every foot of elevation gain. It’s lined by five feet of snow, an uncommon amount for this area. Nearing the top and seeking a place to park, we encounter a small car heading down the valley. A middle-aged woman pops her head out the window. When we ask about a place to stay, she answers, “Talk to my husband.”

We enter the abandoned streets of Calascio. It’s in the Abruzzo region right in the center of Italy, maybe shin-height on the Mediterranean boot. This old village is named for the medieval fortress that dominates its upper reaches, Rocca Calascio. It’s late January, prime time for the Alps and the Dolomites up north. But fresh snow blankets the landscape here, too. 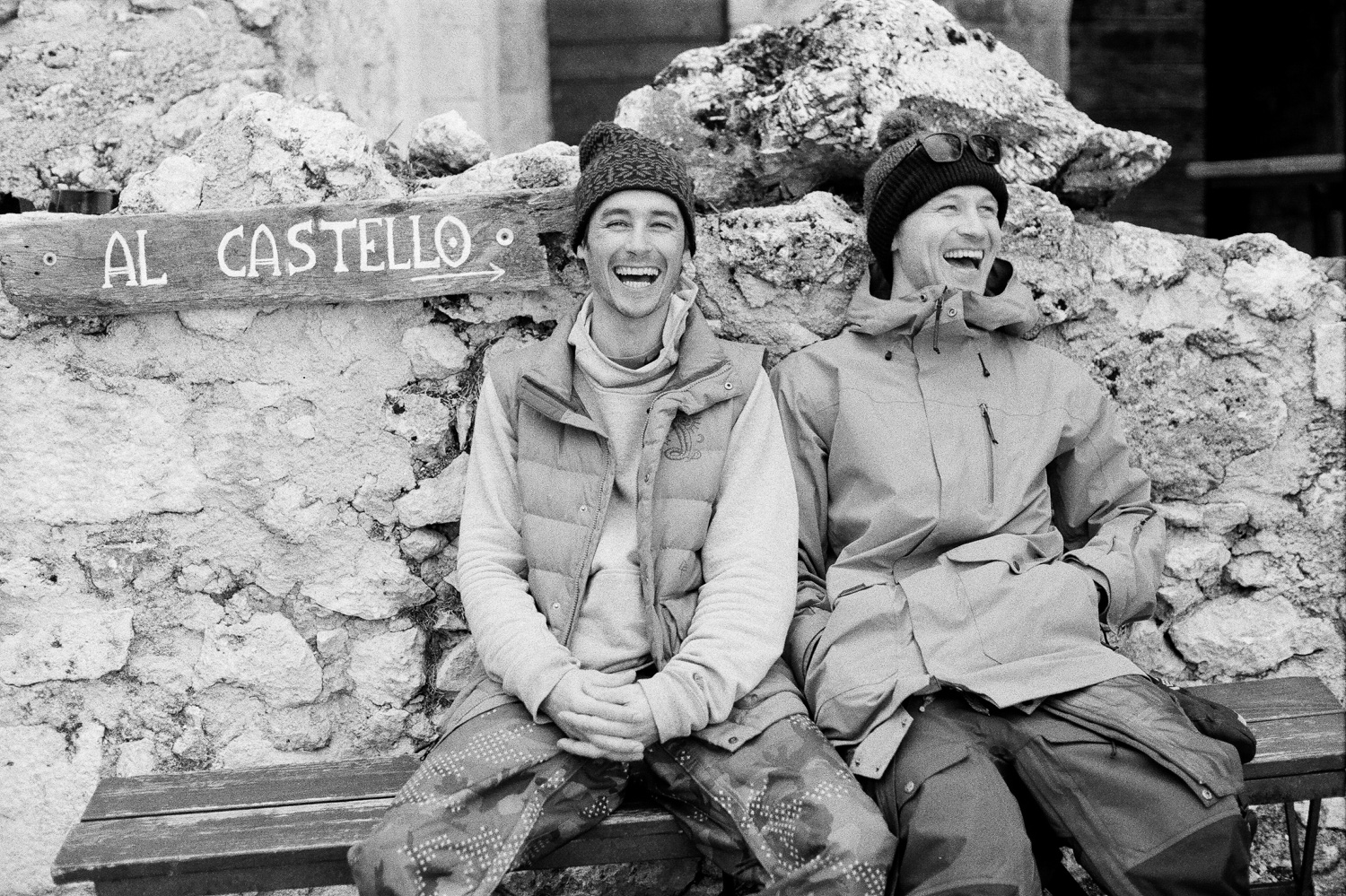 above A moment to rest and enjoy the good vibes and hospitality of the only family living in the village.

Soon, an old man welcomes us in a quick-spoken mix of both Italian and English. His name is Marco and he throws a big metal rod to the ground again and again, aiming to break the ice that covers the road. We can see the Rocca above the village, a ruined remnant of medieval times.

In due time we find the husband in question, Giorgio. It takes a fair bit of dialogue, but he eventually says he could host us for a few days in an apartment located high in the village. Just above our house, a small path covered with snow and flanked by crumbling walls takes us to what feels like salvation. The Rocca—the castle. The solemnity and strength of such a place is almost tangible. The height and thickness of its stone walls, interrupted only by small windows, have stood through more than we could imagine. They rest in front of us like something that has seen it all. 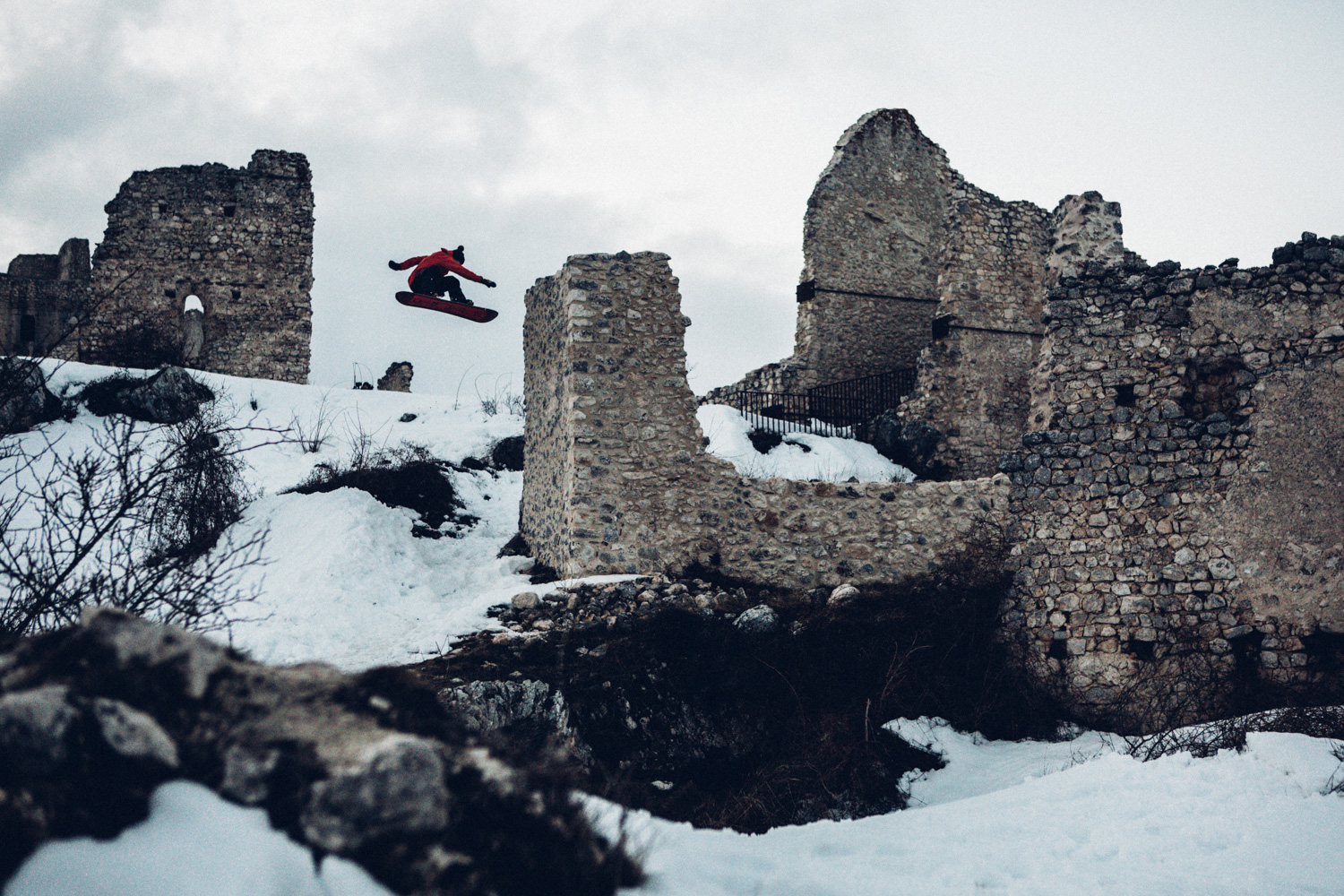 above Last light on a cloudy day. It got dark and cold fast. The ruins don’t sleep, but they take on a different mood with each passing hour. Elias and a 360 nose-bonk to say goodnight.

At 4,790 feet, Rocca Calascio is the highest fortress in the Appenines, a north-to-south mountain range running from the Alps to the Mediterranean Sea. The Rocca was built purely for defense of the region between the 10th and 13th centuries, but fell victim to a large earthquake in 1461. Never having seen military action, the castle has remained in its half-ruined state for the past six centuries.

We arrived here thanks to Florian Bauer, one of Pirates Movie Productions’ main brains. He’d been scouting for unique locations on Google Earth, with abandoned villages, castles and other interesting landscapes on his radar. We wanted to shoot something different with Elias Elhardt and Gigi Rüf, so, when a rare storm was forecasted for this temperate zone in central Italy, off we went. 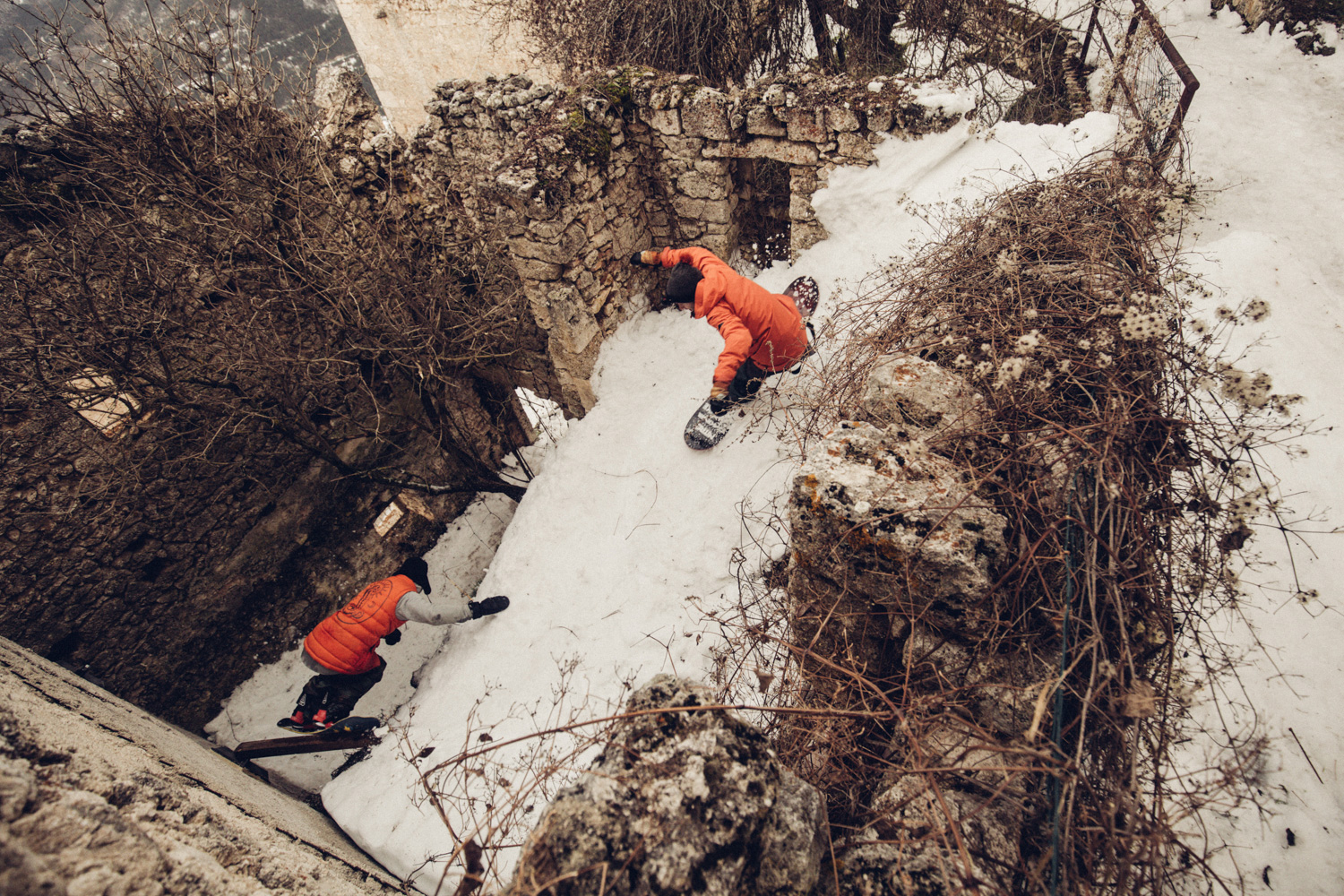 above Most of us wouldn’t even see this spot as rideable. For Gigi and Elias, it somehow makes sense that they can ride through the roof, onto the next floor and out the door.

Elias shakes me out of bed. Once again, he’s up early enough to enjoy the first rays of sun and wants to share them with someone. I’m his first choice because we’ve been roommates for the past week. Intense orange light patches the wall through a small window in the combined kitchen and living room. The fireplace still smokes from the night before. I look out and see the pureness and intensity of first light over the valley.

One final time we follow that same path through the ruins and find new lines among the rubble. The high walls of the Rocca salute us. Sun melts the snow quickly over aging stone. And with this liberty of movement, joy and support, we take our chances until the very end, a blip in the history of this ancient fortress. 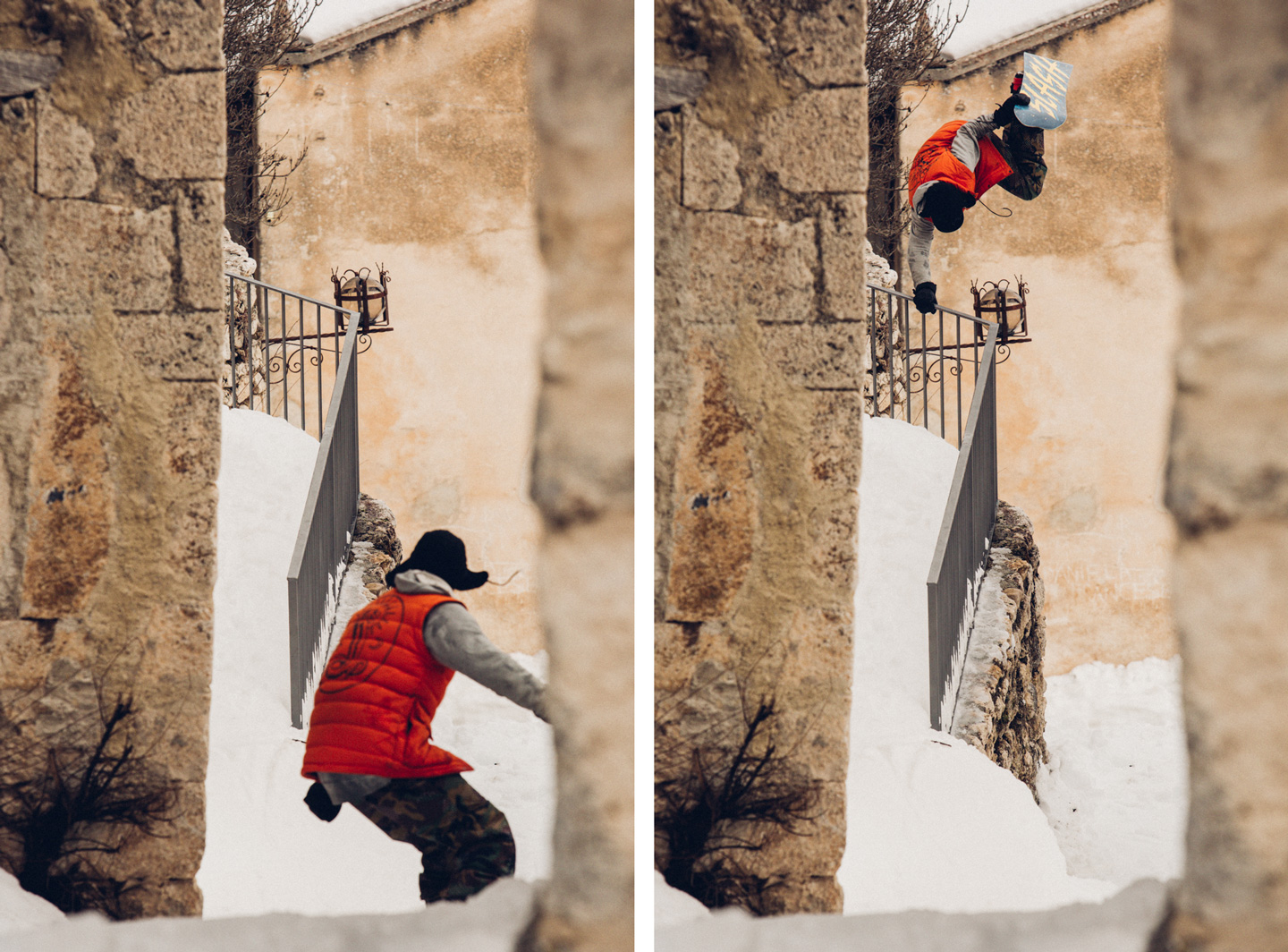 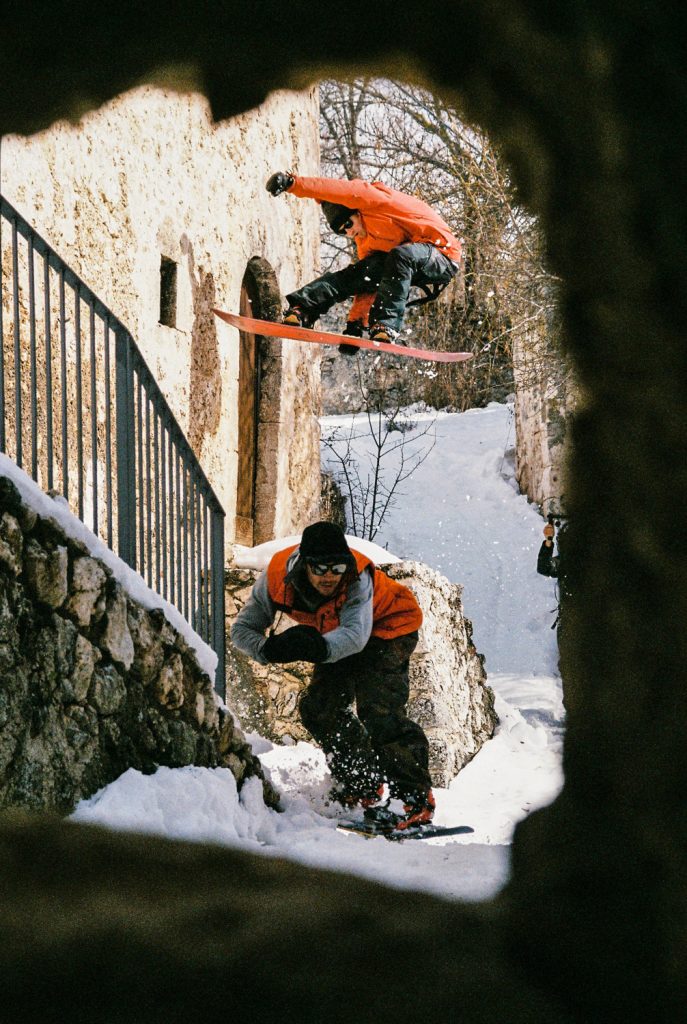 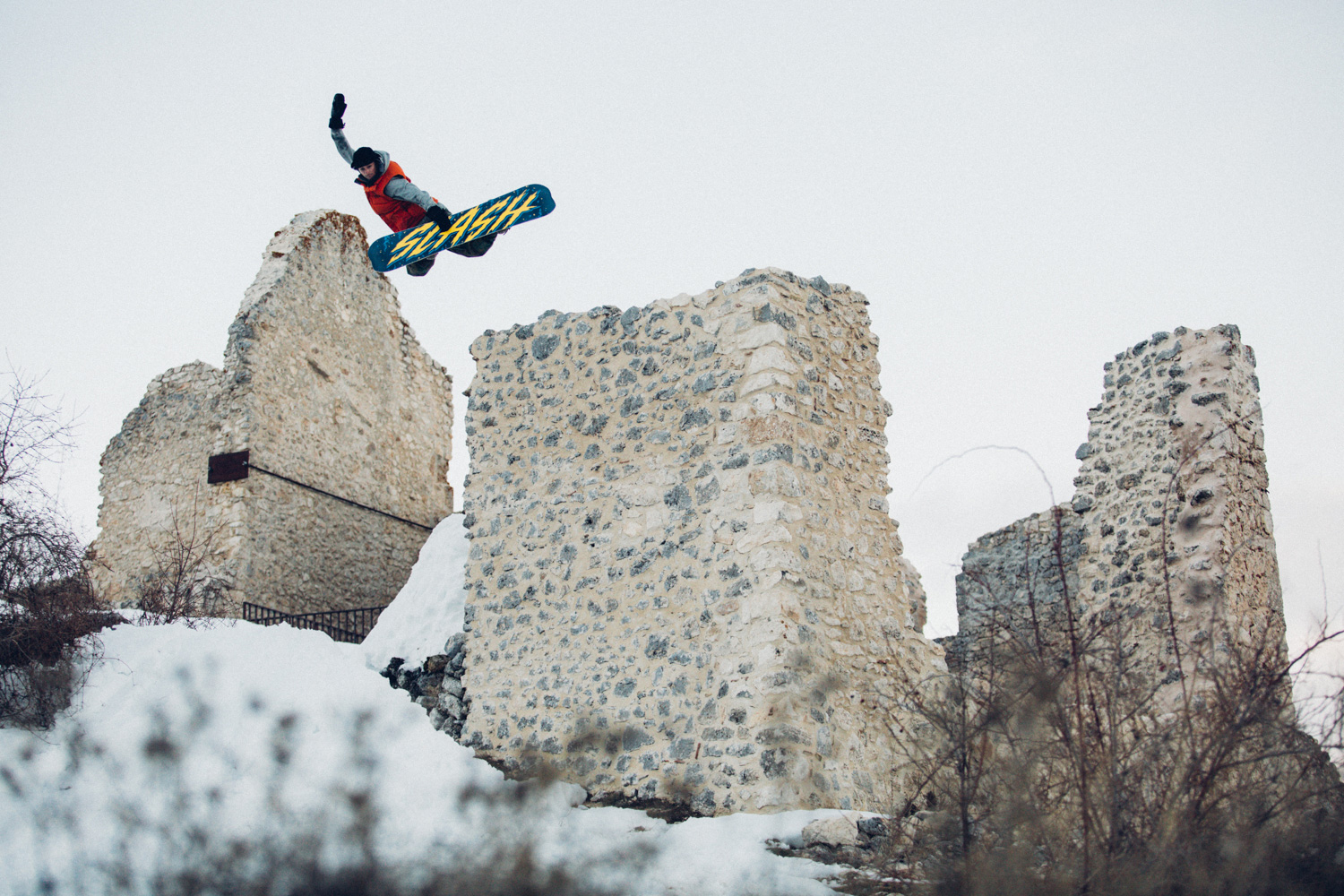 above top to bottom
Gigi imagines, Gigi does—it’s that simple. He sees spots and tricks like no other rider on the planet.
It was as tight as it looks. Gigi threads the needle while Elias grabs stalefish.

A classic in a new spot. Like a chameleon, Gigi adapts his style to his surroundings.