ABOVE: Max Warbington in front of the 2022 Brain Bowl Sessions course at Mt. Baker, WA.

Only two days into digging the fifth and final Brain Bowl of the season, Max Warbington stood amid a mid-April storm at Mt. Baker, WA wondering if constructing such a course was even plausible given the circumstances. “We’re hunkered down trying to cut blocks to stack an 18-foot quarterpipe in a blizzard, like, ‘Ok, we need some help,’” Max says with a laugh. “But it’s all about the experience. This one was less snowboarding, more building, and laughter in the storm. We eventually got the bowl finished up and nine days in we were set to do a super savage sesh with potentially good weather.”

ABOVE RIGHT Zoë Vernon skates bowls in the summertime. Can you tell? Photo: Ben Shanks Kindlon

Rising on Easter Morning long after the sun, the Tre Squad crew and several helpers hauled a portable TowPro rope tow to their hand-built Brain Bowl course, a rideable work of art chock-full of varying transitions and an incalculable number of line choices. Fortunately, the weather panned out. 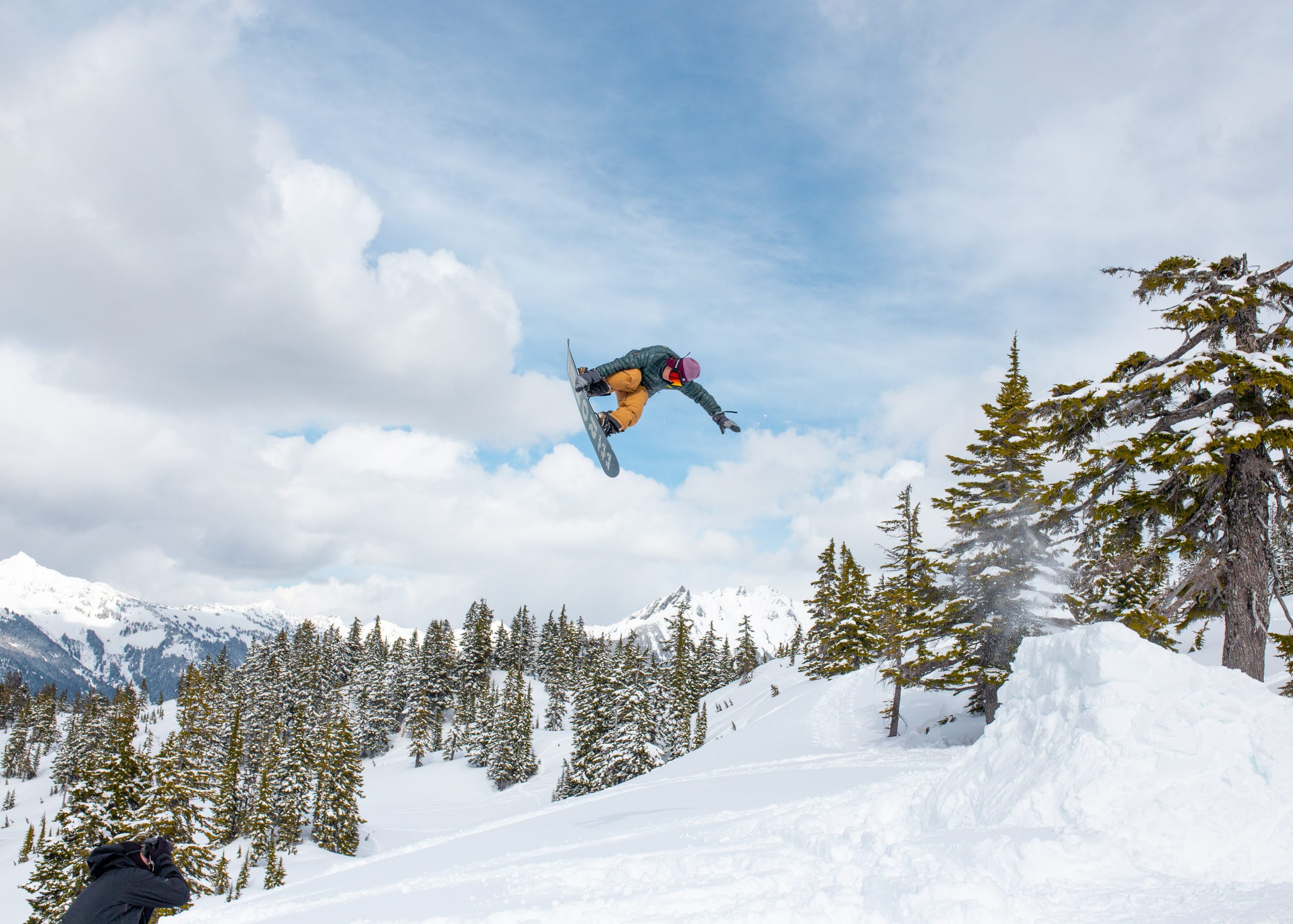 ABOVE A dedicated group of diggers rallied behind Max and the Tre Squad to hand-build the Brain Bowl course at Mt. Baker, WA in a two-week span. When the clouds cleared, they often strapped in and took to hitting jumps they built close to the course. Pictured here: Mt. Baker local Hunter Knoll with a flawlessly stylized frontside 360. Photo: Merrideth McDowell

ABOVE (CLOCKWISE FROM TOP LEFT)

The brain behind the bowls: Max Warbington. Photo: Colin Wiseman

He has a lot of fun, a lot of tricks, yeah he’s from New York. Tristan Robles wilding out in Washington and holding it down for the Empire State. Photo: Colin Wiseman 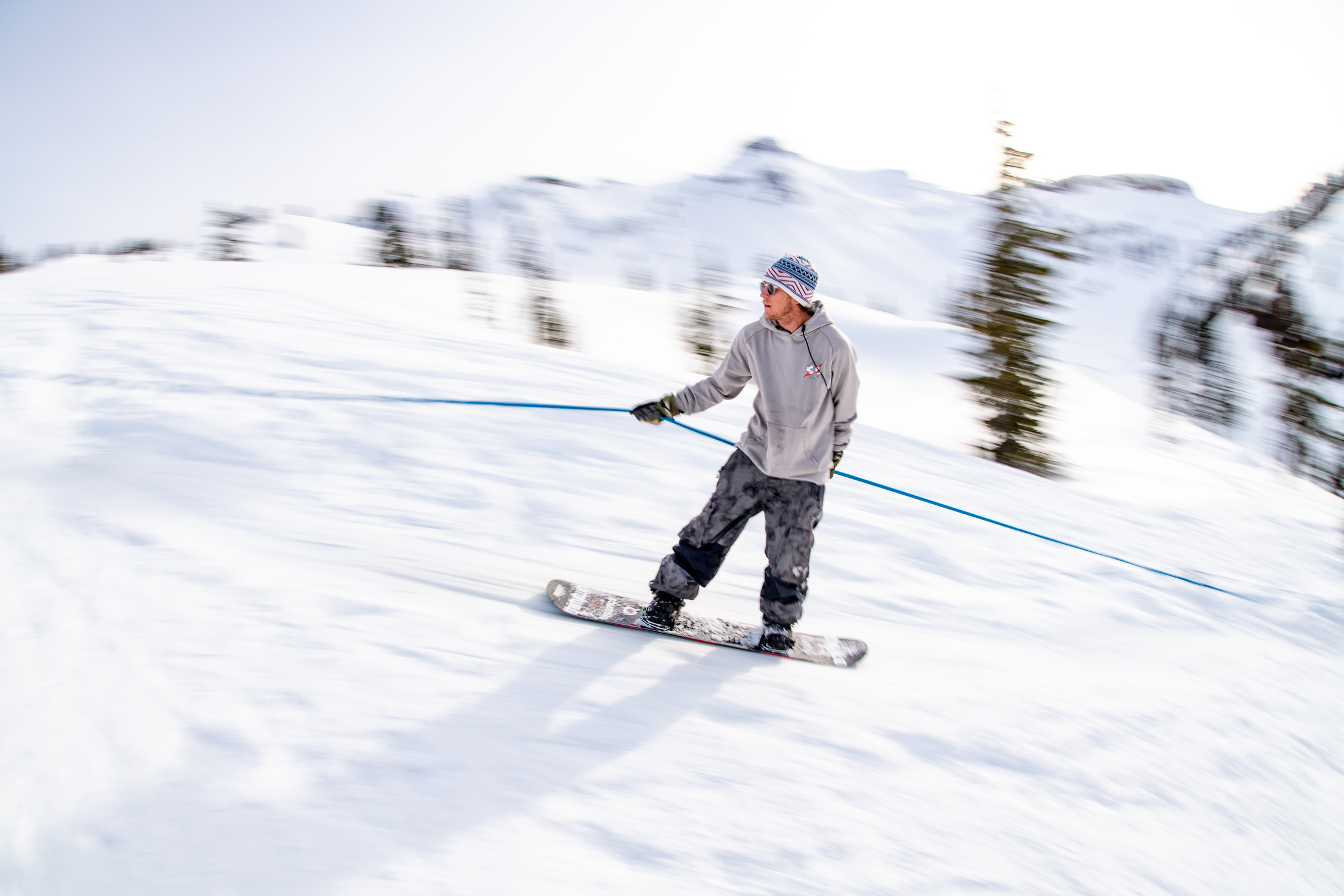 ABOVE Something you don’t see at every hand-built hike park: A portable rope tow. It saved a lot of energy and allowed for a lot more snowboarding. Phil Hansen on the way up. Photo: Colin Wiseman

Like last year’s Brain Bowl at Mt. Baker, most of the day was spent simply jamming, but this year’s gathering also featured a loosely judged, scored-run contest. The turnout was tough with a whopping 60 people signing up on the spot to compete. “It was incredibly fun to have one rider go at a time,” Max says. “We had an announcer, a DJ, everyone’s watching. There were people signed up who could barely snowboard, then there’s Phil Hansen, there’s skiers, boys, girls—everyone’s mixed in together.” Each rider put down their best run, it took so long that second runs were called off, then it was back to pressure-free boarding. 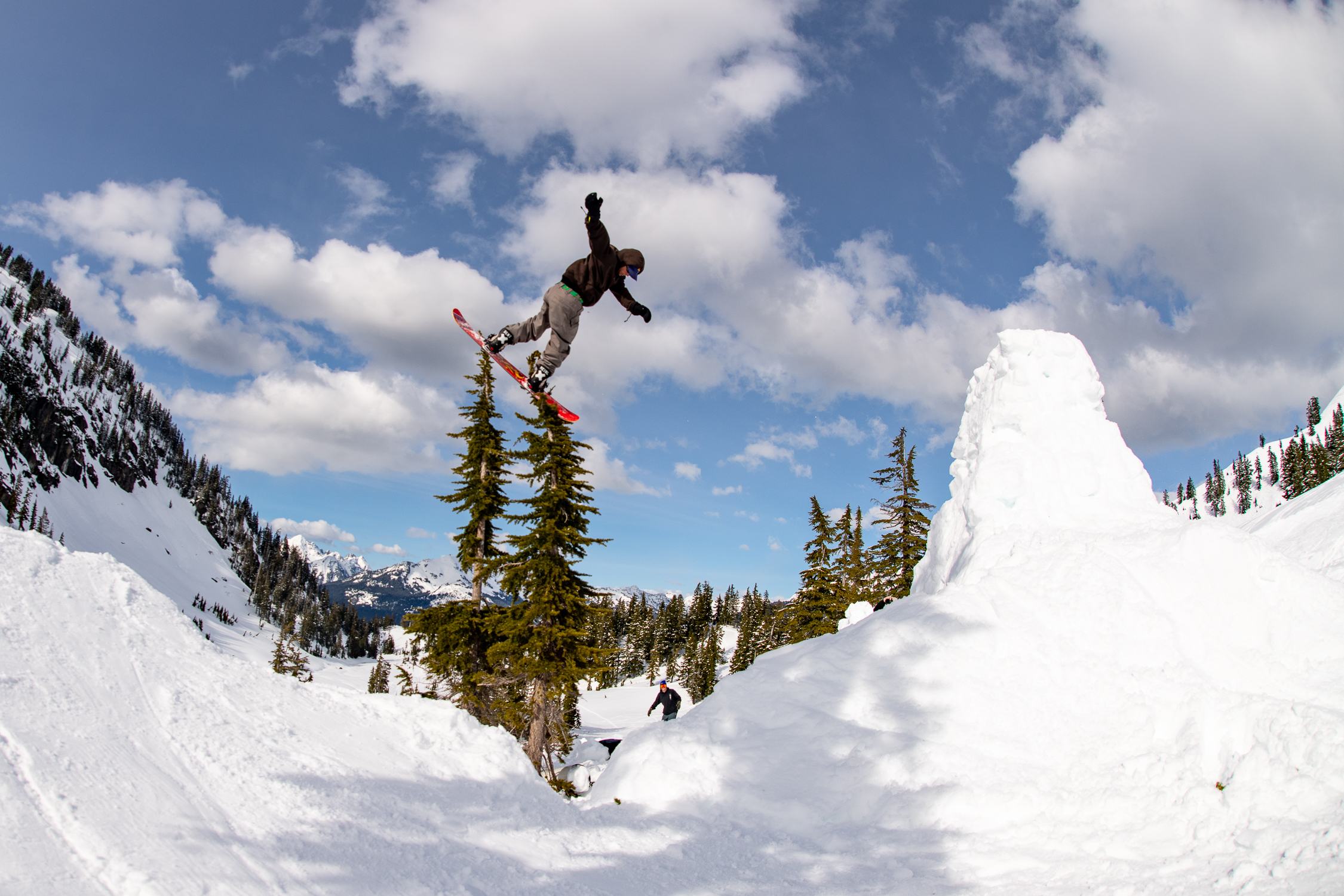 ABOVE Julian Gluck was on a tear for the entire duration of the Tre Squad’s 2022 Mt. Baker Brain Bowl trip, especially on this tree tap coming out of the bowl. Photo: Colin Wiseman

Max says it’s likely that Tre Squad will start holding contests at each of the Brain Bowl Sessions in the future. He’s also considering trying to bring together a larger number of heavy hitters so that he can push a pro contest to go with it. Whichever way it grows, it’s clear the Brain Bowl will continue to evolve. Each build serves an inspiration to better the next, though those preceding will always be looked upon fondly—even if it took laughing through the storm to get there. “The weather this year was hard, but most everything else at Mt. Baker was better this year. The setup was big and had more flow. We have our technique down of how to build the bowls, so everything was really dialed. Even with the minimal amount of time and hands we had, we were able to build something that was really epic to ride.” 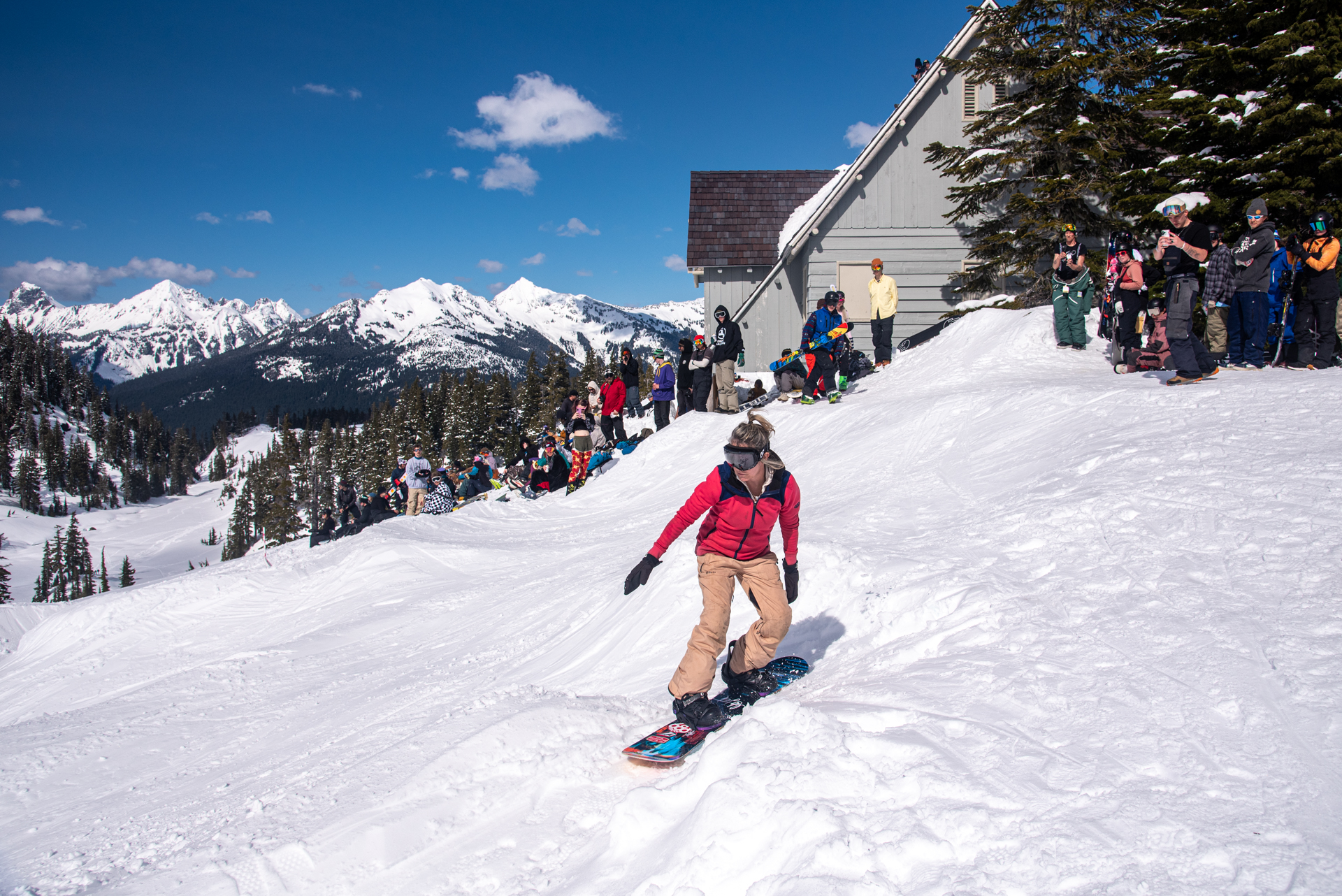 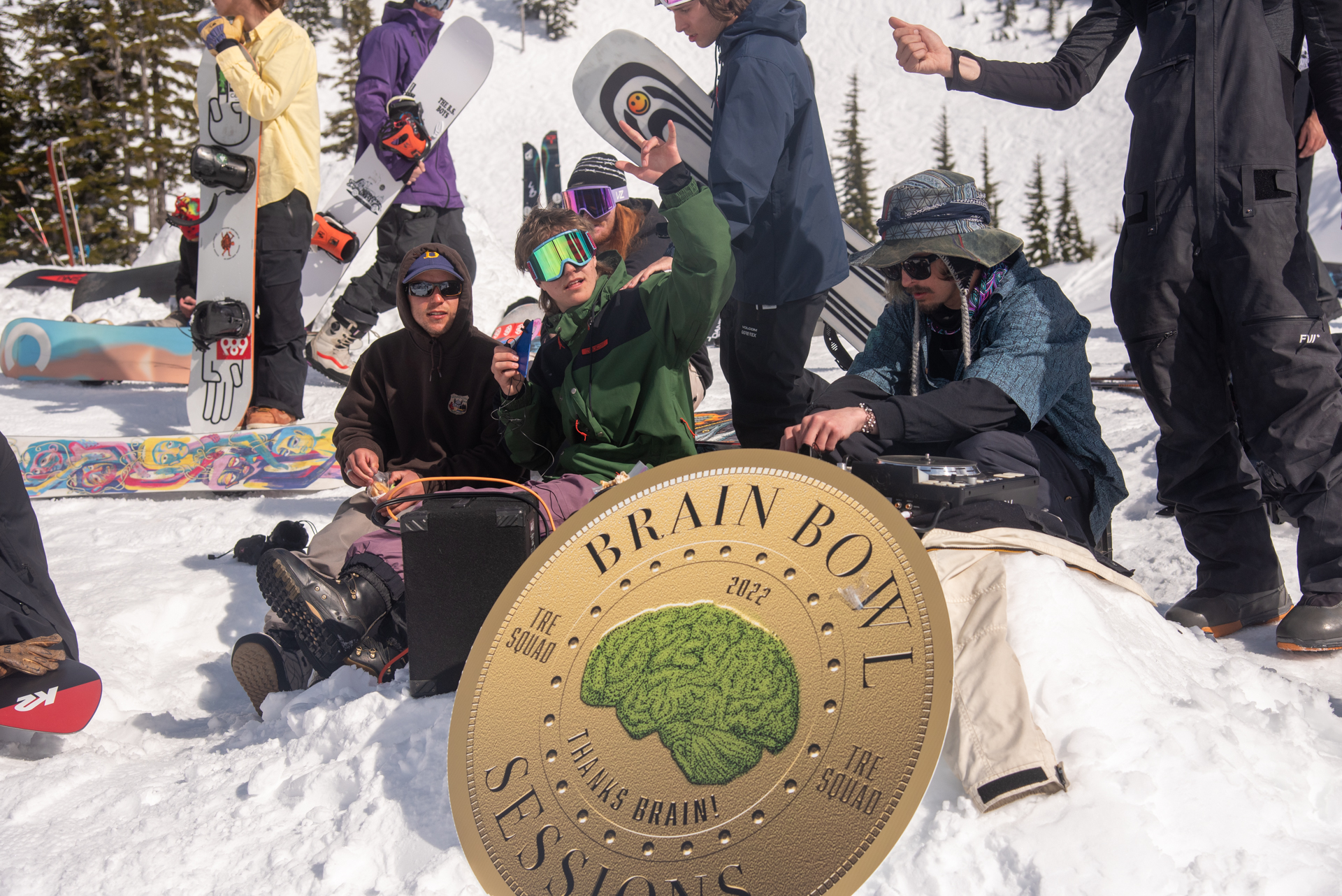 ABOVE Thanks brain! Miles Freelan on the mic, some other B.S. Boy affiliates spinning house music and keeping vibes high. Spring has officially popped off. Photo: Ben Shanks Kindlon

Max would like to extend a special thanks to Weeg Simmons and her family for hosting the Tre Squad crew for the duration of their stay at Mt. Baker. Thanks also to Mt. Baker Ski Area, Mt. Baker Ski Patrol, and to everyone that came and helped build the bowl–Ryan Sherwood especially.

We’ll see you all back next year for another round.