“Maybe the best part of Natural Selection has been getting to ride with some of the best snowboarders of this generation,” Pat Moore wrote. He of course is amongst that group. And that crew was rolling heavy, 20 folks deep, blasting through Dick’s Ditch. Even Shaun White showed up in a white Prada puffy and sent one for all assembled.

But they weren’t the only ones gathering for hot laps. Smaller crews roamed the mountain, firing off for days on end. And it continued to snow. I took a few laps at the resort, seeking patches of fresh, then spent a day in the backcountry with Alex Yoder, Bryan Fox and Alex Pashley. By all accounts, the Tetons were raging—five feet of snow in five days, high winds, cold temps, full storm.

Yet, through it all, the course crew put in the hard yards as they had for weeks, months, some of them a year leading up to this event. 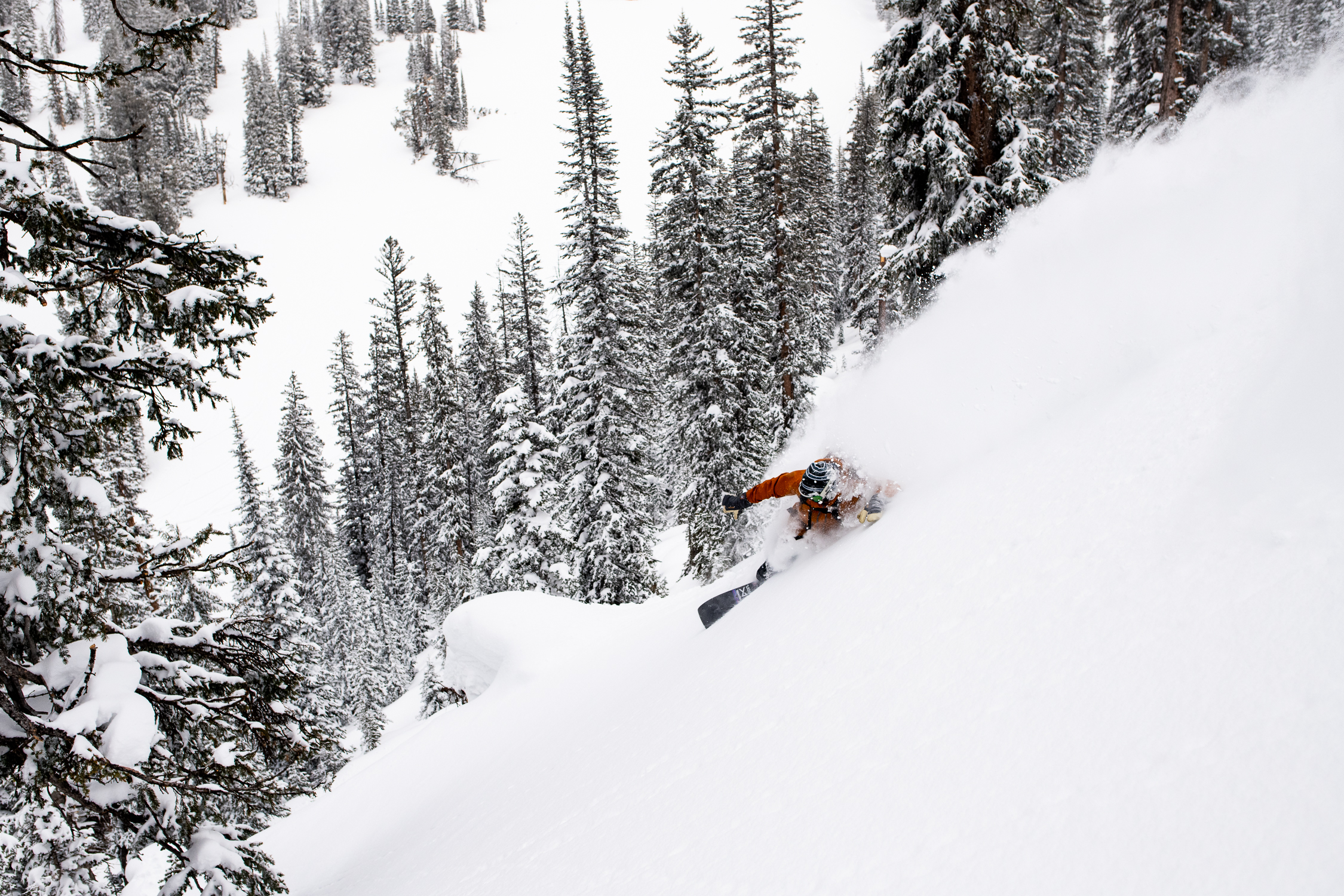 On Sunday afternoon, as the first quarter of Super Bowl LV blared in the background, Natural Selection’s COO and Co-Founder Liam Griffin sat on a couch in the back of the rider’s lounge in The Continuum hotel. A little black velvet rope blocked the room from the public. Maybe it was due to his freshly cracked Red Bull, but he seemed surprisingly alert for a dude who’d just spent two weeks on the ground directing operations at this aspirational livestreamed event, a year-and-half in the making. But really, more. 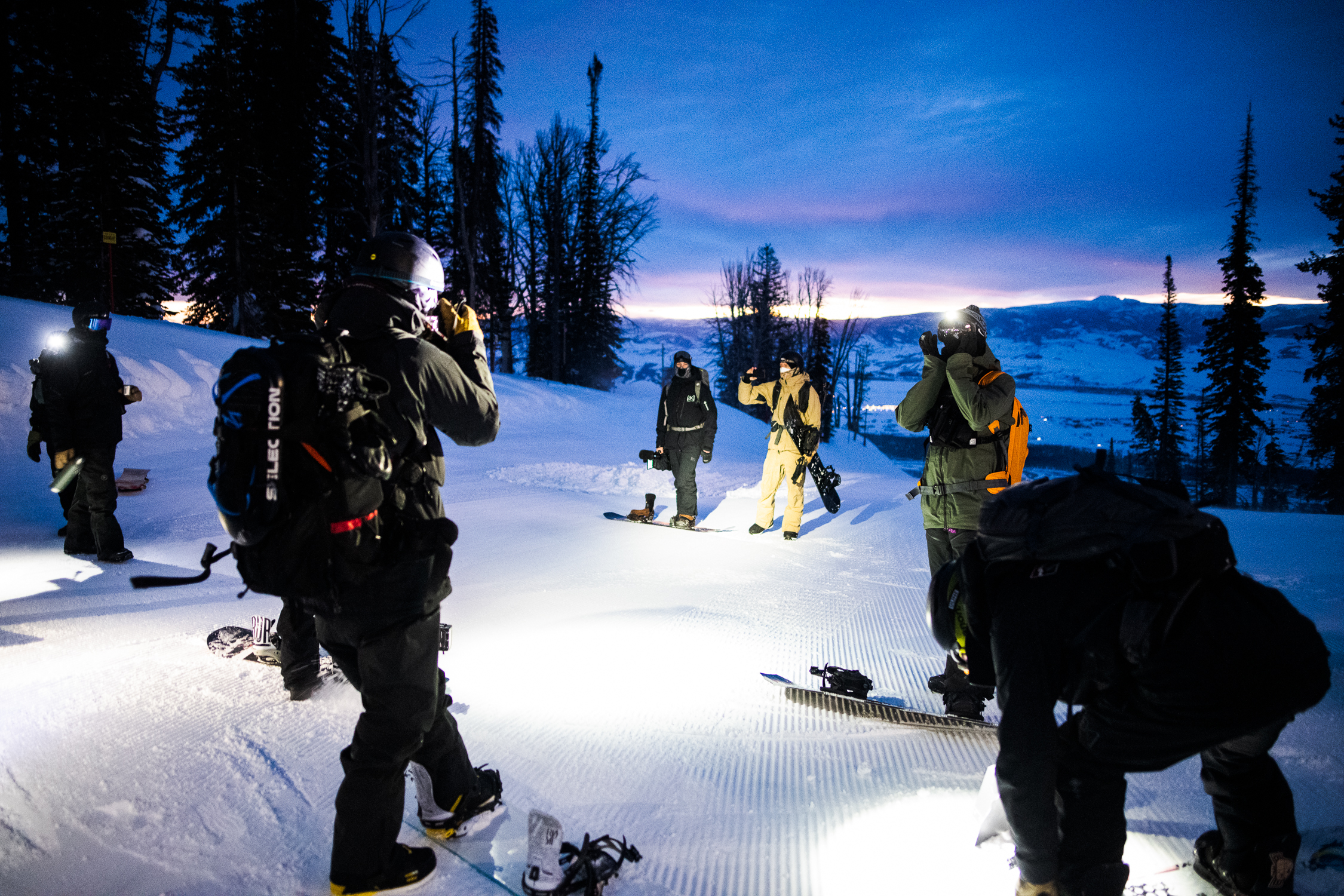 Liam worked on Super Natural [2012] and Ultra Natural [2013] at Baldface Lodge, BC, which were similar to Natural Selection, but both only featured male riders and neither was livestreamed. The dream for a tour, as he explained, had been percolating ever since:

“We started talking about, ‘How do we take this and have it be more than just a one-off event?’ We took a lot of what Travis had learned with Brain Farm on the production side, like how to get big productions into the backcountry and produce really high-quality content from a backcountry snowboard contest. And we asked, ‘how do we do more than one so that it can become a tour?’”

While Travis [Rice] made The Fourth Phase, I did freelance event work, but we had pitch decks—we wanted to make it more inclusive, all with the dream to have a tour that people can watch live, that’s representative of that annual travel cycle that so many pro riders go through. When they’re filming, no one sees it until a full year later. And even if everybody had the same resources and the same travel budgets and went all the same places, you’d never have these apples-to-apples comparisons. You’d have these disparate crews of three or four people. All these trips are going on and you never get all the best riders in the same spot at the same time, same conditions, same zone, where they can just throw down for a day.

What we created was an opportunity for all those people to come together and learn from each other, feed off each other and really throw it down. [Chris] Rasman was tripping the other day on the course during inspection. He was like, ‘If you had a week in this venue with two filmers, you could shoot the most insane video part because it’s all here and it’s all built. Any of these features, if I saw them out in the world, I would build them just like this, but it would take me a day. And you’ve had a crew of seven dudes working on this thing for weeks and it’s all set up and it’s all here.’”

Working alongside CEO Carter Westfall to raise funds, Travis and Liam also enlisted the help of media veteran Tom Monterosso to manage content, function as a rider liaison, and announce the events alongside action sports icon Selema Masakela, the always entertaining Justin “Stan” Levielle, Mary Walsh and others. But Travis, of course, put the whole thing on his shoulders. As Monterosso explains, “Travis is everything—he’s a rider, a founder, a marketing guy, he does course building and maintenance… he’s a hundred percent infinite energy, all the time. I don’t know how he does it.”

But he does. Without a rider of Rice’s caliber and marketing appeal, this never would have been possible. Without the vision of someone like Travis, his attention to detail, from the art to the layout of the course to the ability to pull together a team and inspire hard work, Natural Selection wouldn’t exist. He was out there in the summer, for instance, laying down wooden features for landings, envisioning a venue with near 50 distinct options on a brushy slope midway up Jackson Hole Mountain Resort. Mark Landvik was there for a lot of it.

“They had three or four features up for the test event last year,” Landvik explains, “Then we came in to build 40 or 50.”

Landvik spent nearly half the year on the course. Two summers ago, the crew had shaved down sharky spots and smoothed out the face—what Griffin calls “a safety pass to create a more planar slope from top to bottom.” This summer, the heavy lifting involved everything from figuring out how to get the wood into location to even start the build on the 30-plus-degree, rocky incline, to putting up structures two- to three-stories tall—takeoffs, landings, platforms atop rocks where pillows would form. Then the snow blew in, and the park crew assembled, working daily to manicure lips under the guidance of Terrain Park Manager Ranyon D’arge. A crew of eight plied the course daily as the mountain changed with each storm. The end result was the product of what crew member Ryan Cruze calls “200 hours of shovel work” from each person involved, give or take. They used inflatable “hot dog” airbags to help create landings, among other things. They stomped out lips, constantly tweaking for the ideal trajectory. All that to create what you see as near natural features. I’d probably call it naturally enhanced, but the course proved an ideal testing ground for this first round of livestreamed backcountry riding, brought to you by racing drone follow cams and a complexity of production logistics likely unprecedented in the history of competitive snowboarding.

As Griffin said, “What you see from typical free ride events is something shot from across the valley or from a helicopter—everything looks super small and you can’t really relate to the speed and how tight everything is. We wanted to visually differentiate this event from what everybody else is doing by creating this dream angle.”

While I won’t get into the details of what it takes to livestream from a racing drone in the Tetons across the world, suffice to say it is, as Griffin put it, “a story unto itself.”

“What you see on TV or what you see on the internet, it’s the X Games or the Olympics,” Griffin said. “That mainstream view of snowboarding, it’s like really athletic, manicured, gymnastic—which is cool—but I’m not sure it gets people inspired to go out on their own and actually snowboard. That’s not what I think most people aspire to do. And the places those events are hosted aren’t a big part of the story—no one’s booking a ticket to go to South Korea to shred after they watched the Olympics. I hope people book tickets to Jackson Hole to come shred after they watch Natural Selection. I hope people book trips to BC, aspire to go to AK, maybe someday go to Japan. That travel story has always been such a big part of core snowboarding. I think that’s gotten lost and having the host resort and Mother Nature be part of the story instead of just fighting it is important. At most of the [freestyle] contests, they don’t want it to snow. We want it, and we embrace it, and that’s what we got. I hope this event inspires people to go snowboarding, to explore, to ride the mountains of their dreams.” 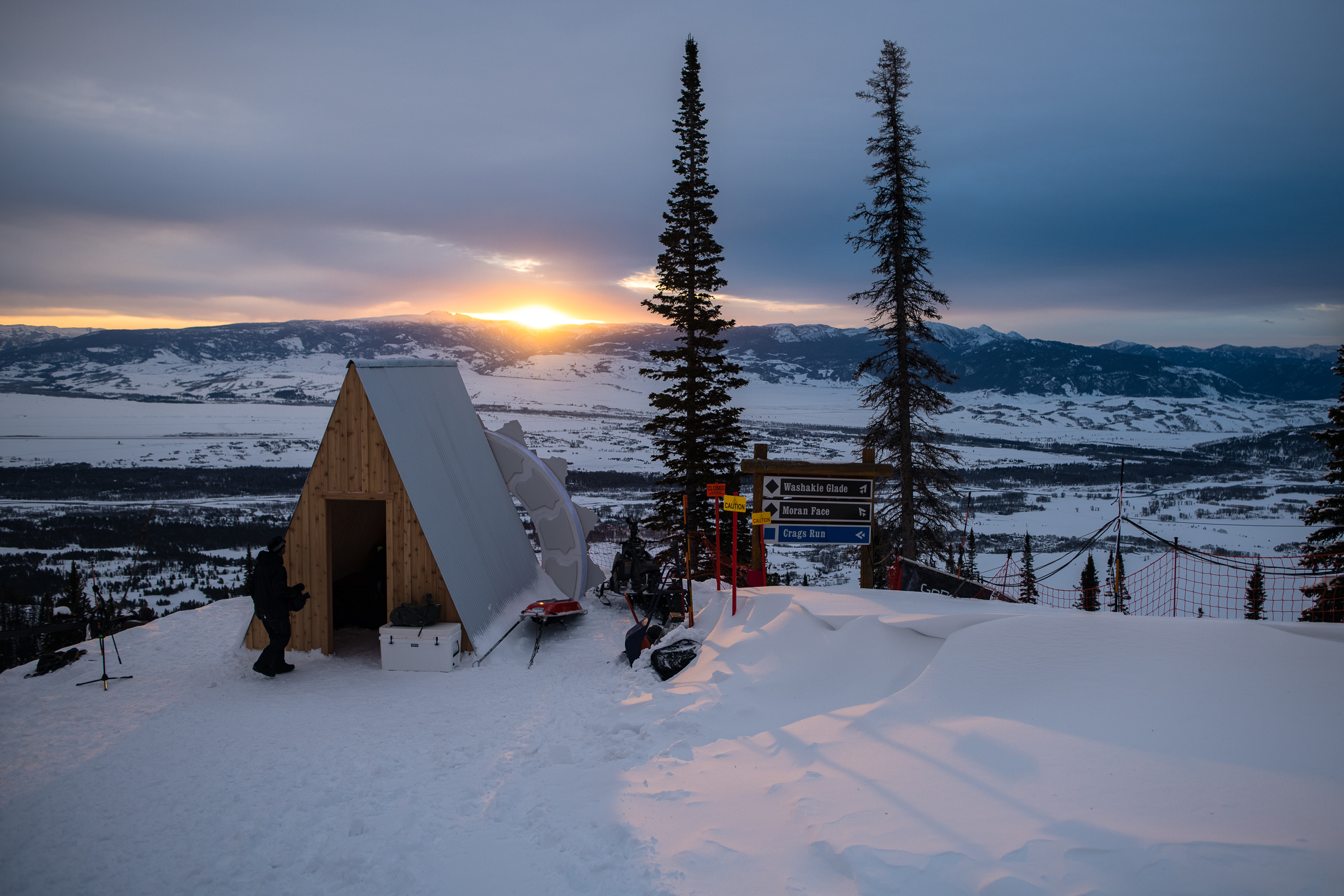 UNTIL IT WAS TRACKED

We were on the gondola before dawn, on the Teton Quad before sunrise. I followed the headlamps of the park and production crew down a fresh, moonlit groomer to the top of the course. The sun snuck under the clouds, bathing the start shack and the first few features in magenta light for a moment. Then the wind gusted. The riders trickled in. Excitement more than tension filled the air. And soon, they would drop.

I gotta admit, I was rooting for the home team: Baker folks. Austen Sweetin was first out of the gate, sending a huge backside 180 of the Great Wall at the bottom, but he couldn’t stomp. Hana Beaman likewise had landing gear issues and both were eliminated from their respective quarterfinal and semifinal heats. They still made us proud. And it didn’t matter so much who won or lost because, as cliché as it may sound, the kind of snowboarding I want to see, the kind of snowboarding the mainstream needs to see if we’re going to grow the core of snowboard culture, was broadcast to the masses. Mikkel Bang’s switch methods and rock tap front 3, Zoi Sadowski-Synnott’s hard charging top to bottom and powerful landings, Ben Ferguson’s switch 9s, Mark McMorris’s double wildcat, Blake Paul’s crippler off the hip—all impressive stunts, but all also linked into a top to bottom powder line. High-speed, natural flow by the world’s best in big mountain terrain: that’s the pinnacle of snowboarding in my mind. And somehow, the crew pulled it off, beaming the livestream to living rooms worldwide.

After McMorris and Sadowski-Synnott were rightfully crowned champions, all gathered once again atop the course. I asked Travis how he felt. He let out a slow, deep breath, the weight of such a grand experiment now gone from his shoulders, for now. “I feel good. We learned a few things… there are a few things I’d like to add for the next time.”

Content. Forward-thinking. Travis turned to drop for a fun run. The event crew was already spinning laps, getting a taste of the features, hooting their friends in after weeks of hard labor. Eventually, the media folks and others close to the contest were able to get a few in, too. And even those who aren’t inclined to launch large airs found a place to lift off, landing in plentiful leftover powder, cruising a venue in sync with the pulse of the snowboard community until it was tracked. 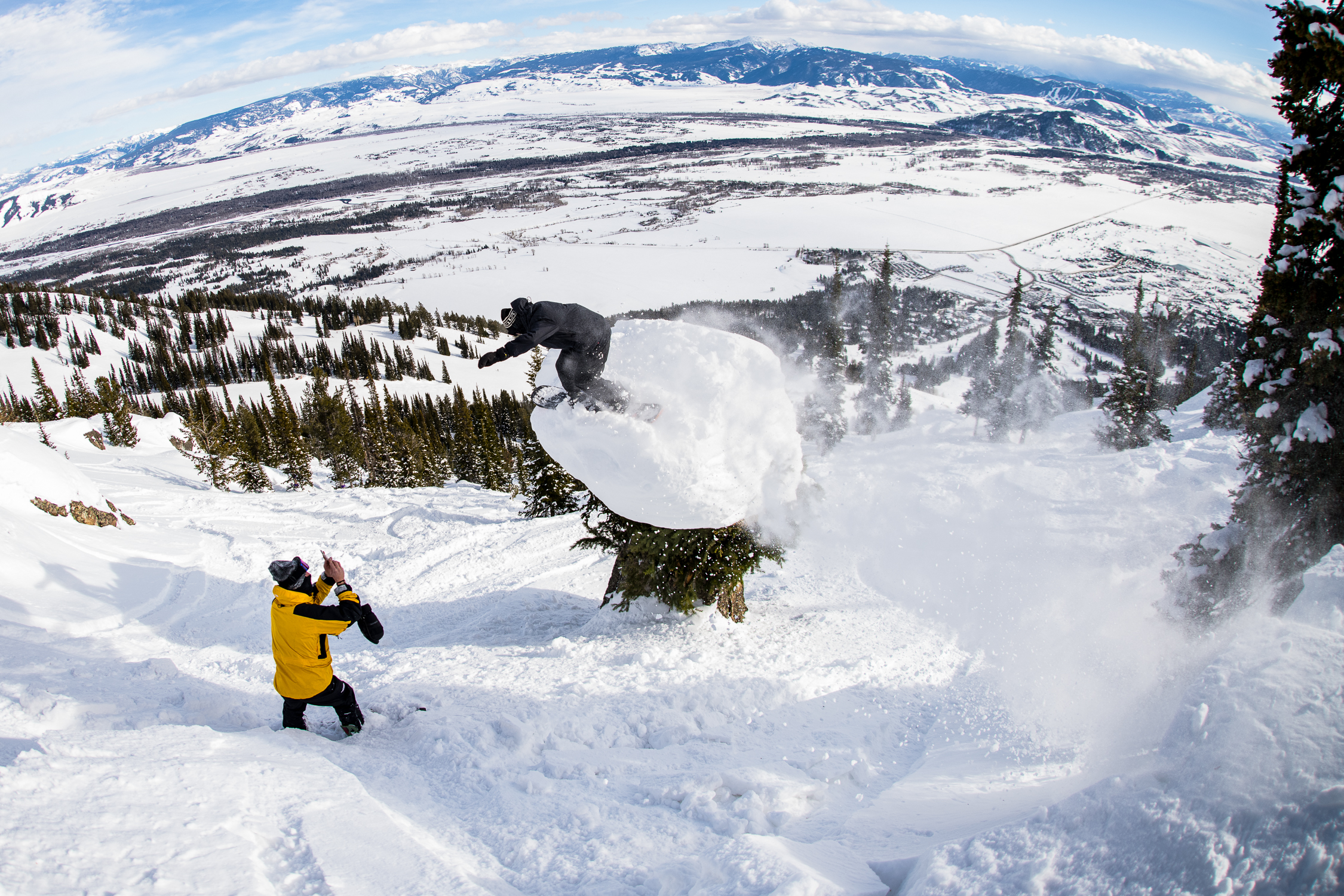 Ian Boll samples the course while Dave Marx gets a clip after the contest ended. Photo: Colin Wiseman

Thank you to Red Bull Snow, Yeti, the Natural Selection Tour and Jackson Hole Mountain Resort for their hospitality and assistance in our attendance of this event. A huge thank you to Lora Bodmer, Travis Rice, Liam Griffin, Ryan Cruze, Keegan Rice, Gary, Tom Monterosso, and everyone else who helped us out over the course of the event. If this is the future of competitive snowboarding, it’s safe to say we’re in good hands.