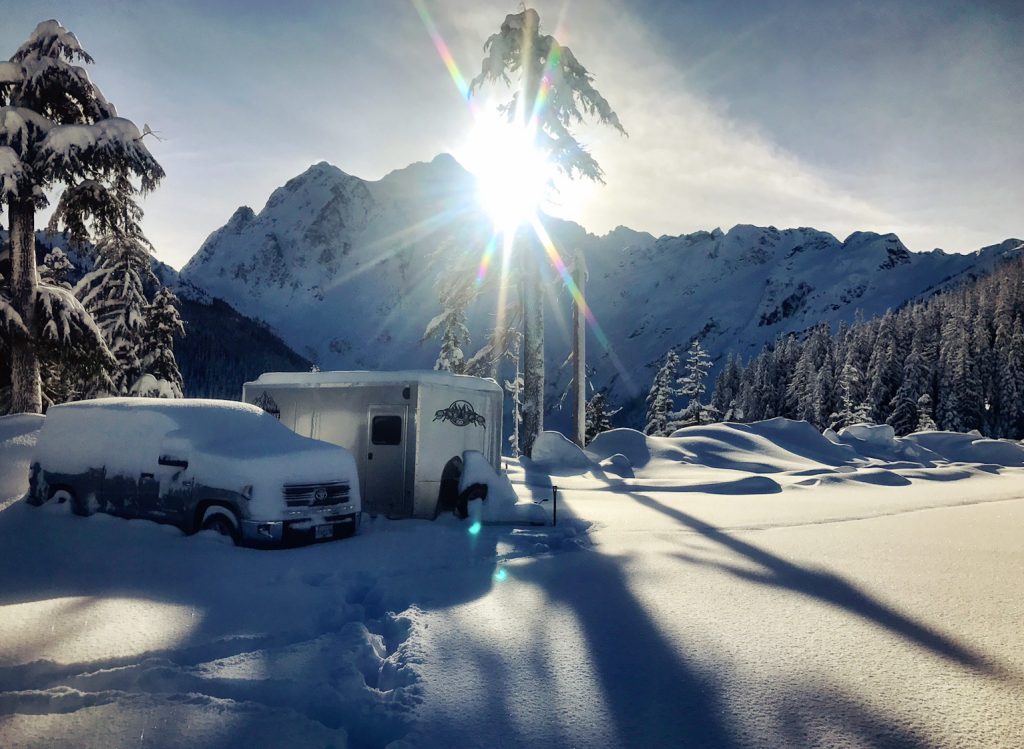 ABOVE Ashley Call with one enviable view from the Mt. Baker parking lot.

Last Sunday the Washington State Department of Transportation shut down Highway 542 east of Glacier. About three feet of snow had fallen the previous three days. The trees along the road were overloaded and snapping left and right. One even landed on a car. Everyone at the mountain was sent home early and the road to Mt. Baker has been shut down since. The DOT has been overloaded with clearing snow in the lowlands, but they’re now hard at work getting 542 clear. It’ll be open on Friday in time for the 31st Legendary Banked Slalom.

Meanwhile, a handful of campers have been stuck in the parking lots at Mt. Baker Ski Area. Ashley Call was one of the lucky few. Maybe the luckiest. Ashley is from Skagway, AK and here visiting, camper trailer in tow. He was all set up to camp through the LBS. So, for the last four days he’s been hunkered down in front of the White Salmon lodge and riding every day. Imagine that!

Here’s Ashley to tell you all about it:

TSNJ: So, what you been up to?

AC: (Laughs) Well…you know. So the parking lot cleared out today, but I’m still pretty well stocked. I’m on day nine now of being up here. I came up here with enough supplies to stay through the Banked Slalom, so I’m doing okay.

But I was a little shocked when they first told me I was stuck up here. And when they closed, I didn’t think they were going to be closed for four or five days.

And you’ve been getting to ride?

Yeah. Monday was a full storm day. I was already parked in the White Salmon Lot. I was the only one there. And Gwyn came over and told me I wasn’t allowed to go anywhere except the Chair 7 trees. So, I rode Chair 7 trees on my pow surfer. And then later I did a little night riding. I actually went a lot higher than I was supposed to go, at night, but don’t tell Gwyn that.

When I woke up on Tuesday it was completely bluebird. And it was cold, the snow was super blower, cold smoke. Gwyn said she needed some help setting up the course and I was all about it. So, I helped with the course a little bit, ran some fence lines, set up the timing wire, stuff like that. Then I kind of linked up with ski patrol and the afternoon turned into just shredding Chair 5. Just hot lapping it with Patrol. The snow was so good and the conditions were just so perfect that we all decided it would be a shame if no one skied it. (Laughs) So we skied it.

Yeah, Tuesday was insane. It was the best lift accessed riding I’ve had in my entire life.

And then today [Wedensday], I went up at about 10 o’clock and set up some tents for the race, did some digging and stuff, slipped the course a bunch of times and then I got to take some more laps. And it had started dumping around 2 o’clock on Tuesday, so our tracks were pretty much filled in. We had to ski it to control it, you know. To make sure it’s safe. 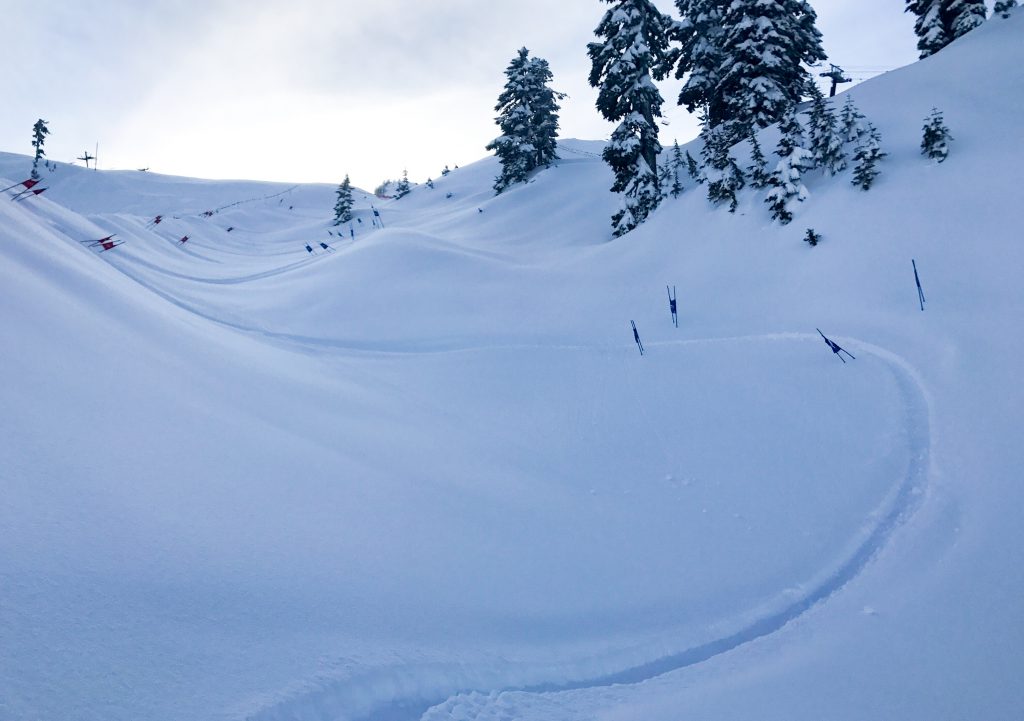 ABOVE First track down the Legendary Banked Slalom course in two feet of fresh. Yeah, Ashley Call got that.

And how’s the course? Are you the only snowboarder to go through it so far?

The course is sweet. It’s actually shorter than normal. It ends before it goes down into the toilet bowl. And there’s a bare bones crew up here. Some ski patrollers are here. There’s also some staff, kitchen staff, so there are some other snowboarders here that were slipping the course today, but I’m the only racer here.

On Tuesday I broke trail through the course. It was crazy. Knee-deep pow. And I was the first one down it. That was kind of a surreal feeling. Going through the gates, first tracks, super deep pow. It was pretty wild.

I bet. Do you know anything about the status of the road?

Well, Duncan made it up today with an escort. And then they escorted a bunch of people out of here. There were some people camped out in the Heather Meadows lot since Sunday too, and some of them definitely weren’t prepared for extended camping. There were some people sleeping in their cars. They were all in a convoy that went down today at 4:30.

They told me I could leave, but I was like, ‘Fuck that. I’m staying. It’s fucking dumping.’ And I’m going to help work on the course again on Thursday, so I’m not going anywhere. 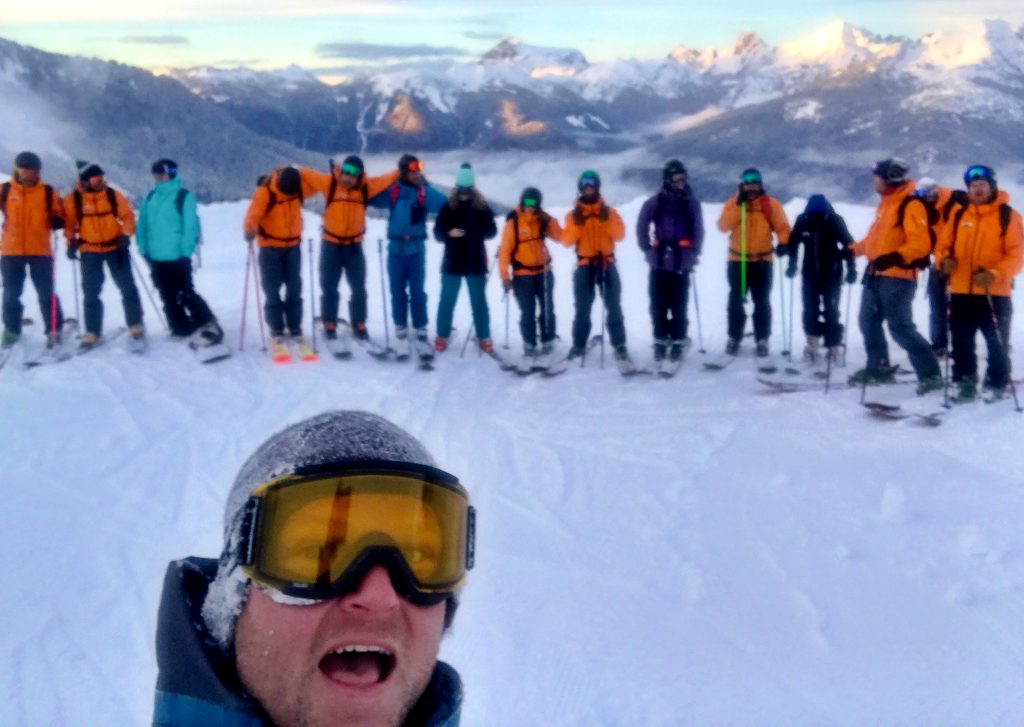 ABOVE Didn’t happen if you don’t get a selfie. Ashley Call snapping it into reality.

And finally, the real question is, what did you do to deserve this? You must be Karma rich?

That’s a good question. Um…I’ve actually been thinking about that a lot. You know I set myself up for success I guess, having this nice camper. But I don’t know, I don’t think I did anything cosmically to earn this, but I’ll take it, man. It would be nice to have some buddies up here though.

No friends on a pow day.

[Laughs] Yeah, no friends on a pow day.

But, the Ski Patrol has been rad to hang with. And they’re working: bombing, doing control work, cleaning tower pads, running the chairs. It’s not just glory pow skiing, there’s work getting done. But there’s also a lot of shredding going down.

I’m stoked. But I’d also love for them to open the road so everyone could get up here.

[Laughs] Yeah, okay, maybe by tomorrow. It’d be good to see everybody.

You should go buy some lottery tickets when you get down the hill.

I’m going to go buy some scratch tickets. But I don’t know, maybe I just burned up all my luck. I’d rather be lucky than good.