Matteo Soltane at speed and en route to 3rd place in Open Men's. Times were tight, with the top five separated by only .6 of a second. Matteo ran 55.83, .04 behind Jay Kelly in second place, and Kevin Nolan in first at 55.52.

“This place is home, and I love it up here,” Marcel Dolak says. His voice cracks a bit. He’s feeling emotional, and it shows. He truly does love it here, in a mix of snow and rain, on the Rampart quad chair at The Summit-at-Snoqualmie’s Summit East. Snoqualmie Pass, WA raised him as a snowboarder. Nowadays, Marcel’s a very successful realtor in Seattle, but he didn’t always have the means to snowboard, even at a humble little hill like the place formerly known as Hyak.

“In my youth when I couldn’t really afford a pass, [The Summit-at-Snoqualmie] helped me out—I started instructing, then I got a bit better and they formed a team called The Syndicate, and I got to be a part of a place with so much snowboard culture,” he continues. 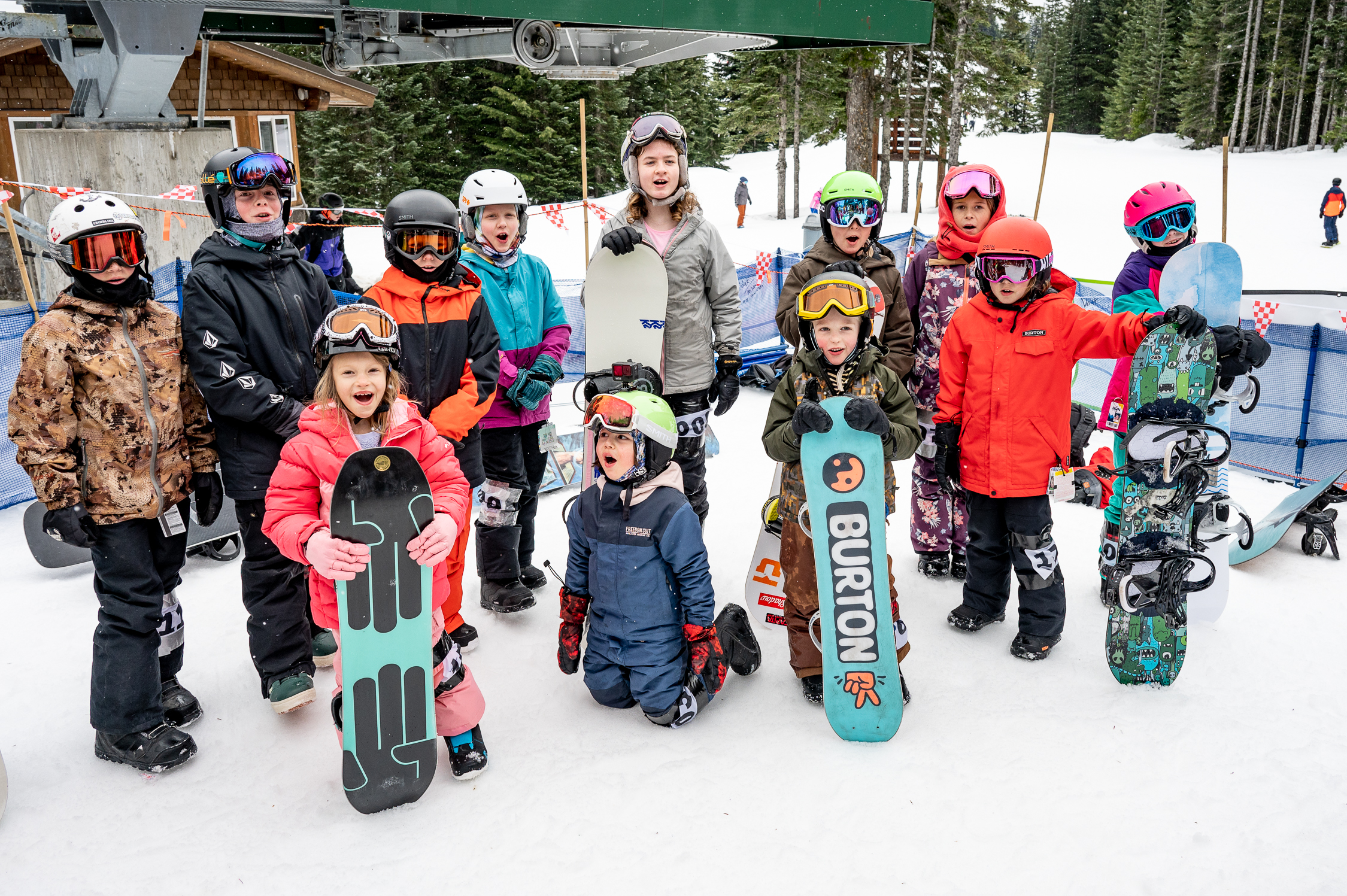 PacWest BS is for the children.

Back in the 80s and 90s, Summit East, which was also once also known as PacWest, was a bit of a haven for the then-outcast snowboarders. There were freestyle events and a banked slalom in the mid-80s and Chris Shuler ran the Aloha Snowboard Shop and school near the base area. Lift tickets were cheap and it was one of the few areas that allowed snowboarders in Northwest Washington. The scene that thrived into the 90s with northwest legends like Craig Kelly, Jamie Lynn and Mike Ranquet making regular appearances. There was the Good and Plenty Jam, then the Urban Circus Jumpfest, which flowed into the Holy Oly of the mid-2000s. 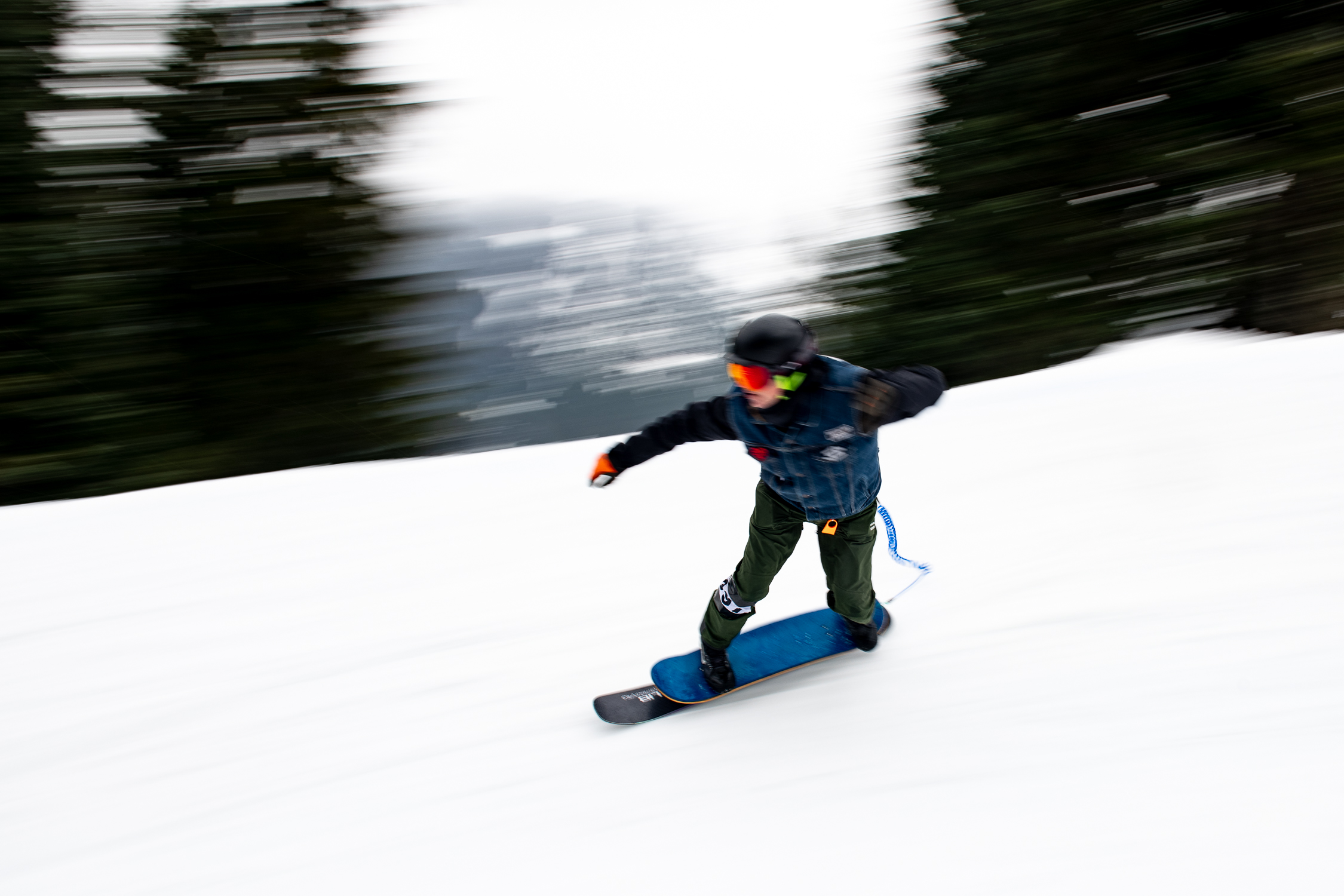 Then, for some reason, it slowed down. East was open a bit less. That infamous water tower that Travis Rice bomb dropped in front of Justin Hostynek’s lens, painted like a beer can, grew dirty and streaked. The park at Central took center stage and East lost its mojo. Dolak wants to bring it back. So, he created the PacWest Banked Slalom. 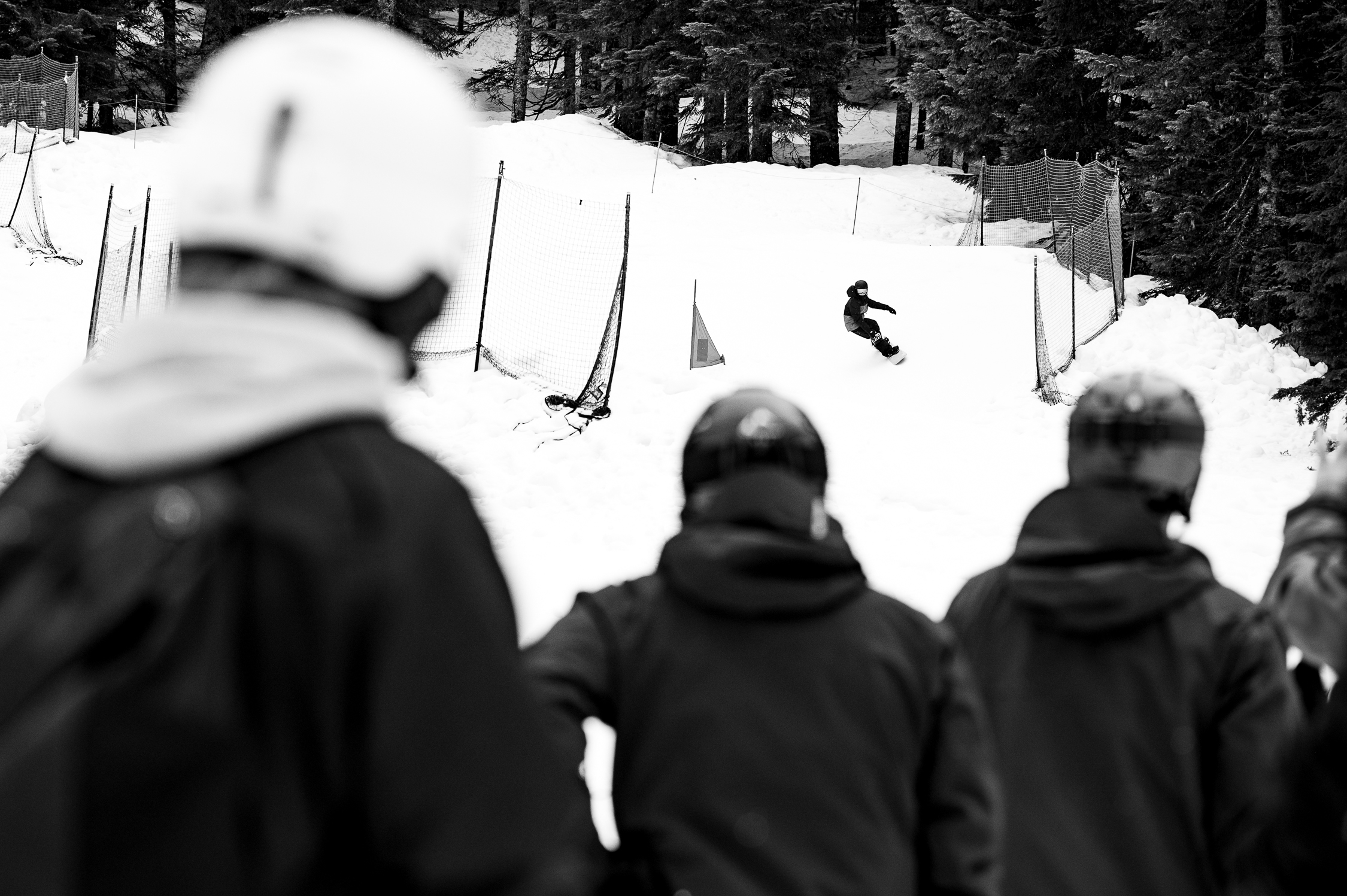 The crowds were out to watch. Dixsan Martin, through the trees and into the fast bottom section.

Originally hoping to run in 2020, COVID pushed the event back a couple years, but Dolak and company persevered. Alongside Summit marketing guru Karter Riach, co-host Olivia Cayley and a dozen diggers, riders, and a single cat driver, Dolak put in a week-long labor of love in the form of 20-ish turns and a course that took just under a minute to run, if you’re quick on edge. Dolak, of course, is a banked slalom connoisseur, and it showed in the build—fast and flowy, high walls, breaking through the trees with just enough spice to keep it interesting. A true success for a first build. 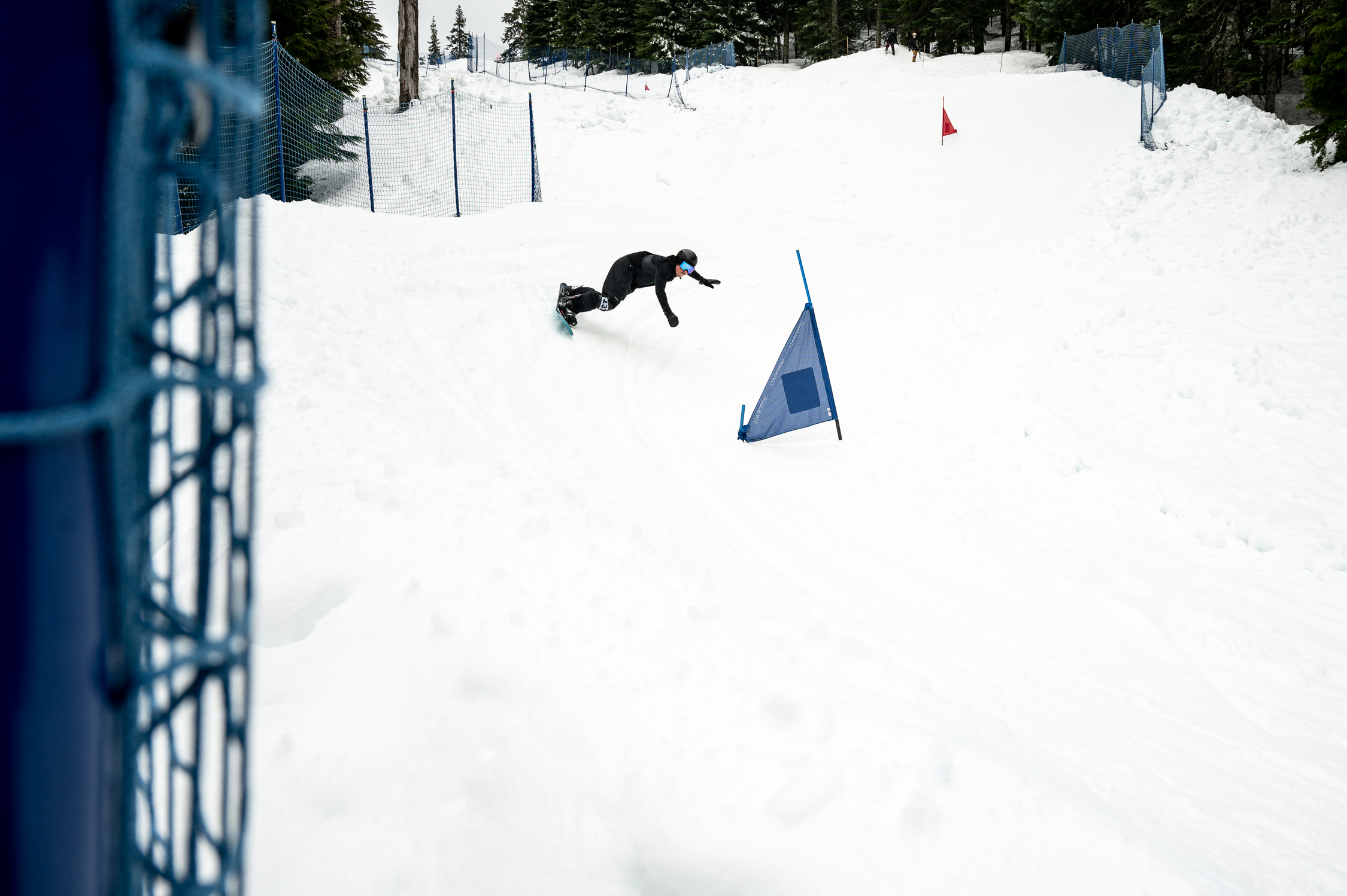 We’re nearing the top of the lift. There’s the start shack. The kids are assembled, ready to drop. They’re stoked.

“It’s really important to preserve the snowboard history here, and just have people have fun up here and enjoy it—have a great weekend shared with friends and build that community and snowboarding, especially across generations,” Marcel says. “It’s so important to all of us.” 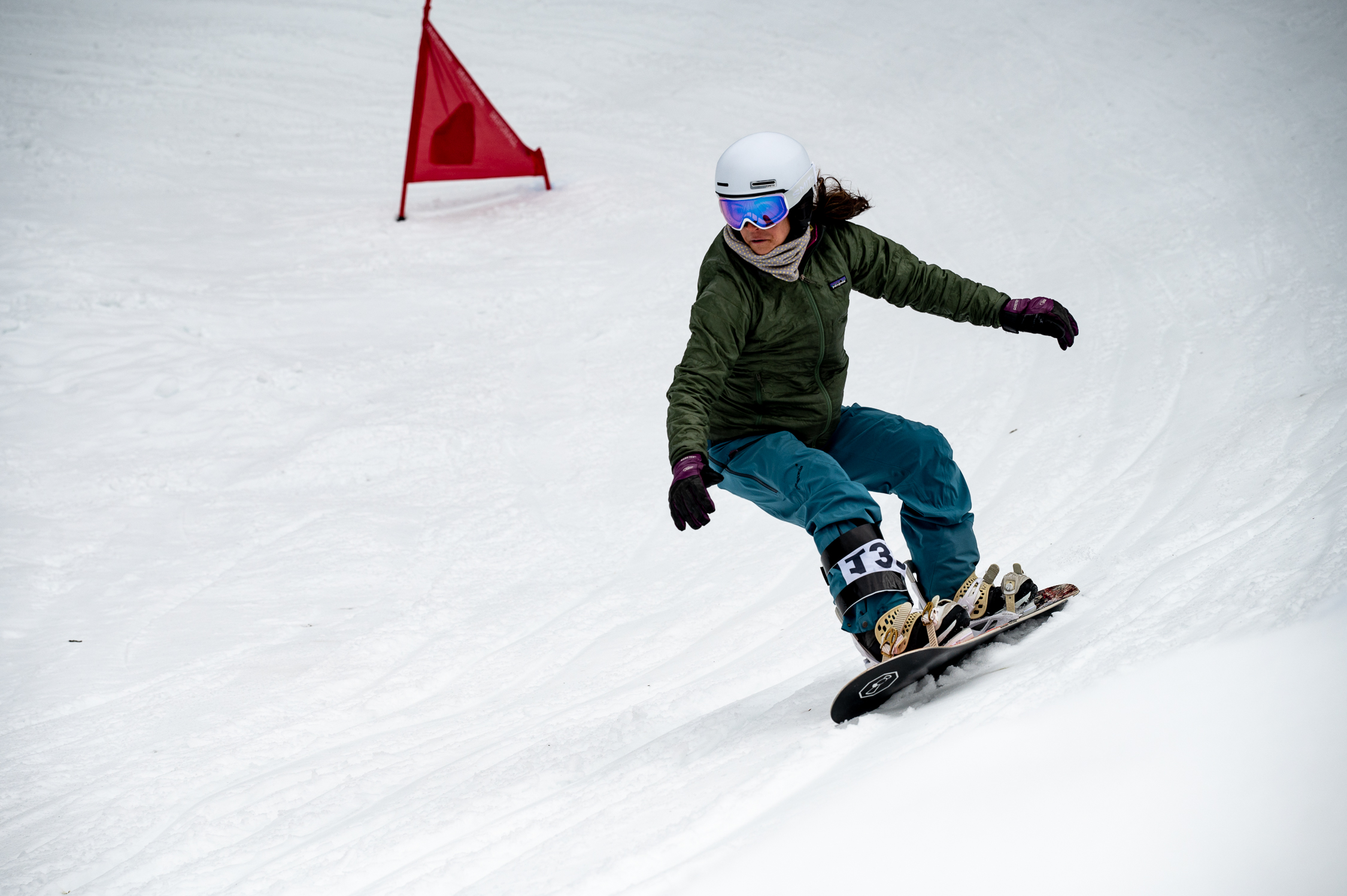 Thank you to Marcel Dolak, Olivia Caley, Karter Riach and Guy Lawrence, as well as all of the diggers and riders for making the PacWest Banked Slalom a truly memorable weekend. Also, thank you to Jay Kelly for the waxing station and ping pong. We’ll see you at Summit East in 2023.