above Peace signs and smiles during a SHRED Foundation gathering in upstate New York.

In 2005, Danny Hairston was working as a youth development leader in a Brooklyn high school where he directed violence-prevention programs for at-risk teenagers. One day, a coworker asked him to be a chaperone for Burton’s Chill Foundation, a program designed to promote healthy living and the learning of important life skills through snowboarding. “At the time I was like, ‘I’m a black dude from Ohio, I don’t know the first thing about snowboarding,’” Danny says.

Never having ridden or skied, Danny accepted the responsibility and supervised the group through its first day on the hill. He learned to ride along with his students, and the experience changed his life. Despite being only two semesters from graduating from New York University, Danny put his studies on hold to work with Chill, and eventually became head of the foundation’s events and fundraising division.

With more than 20 years of experience in youth development and a bachelors in public administration, the 46-year-old father of four says that, in all of his time working with kids, he has never seen anything as influential or powerful as snowboarding. He’s spent the last year developing the SHRED (Students Helping Re-imagine Education) Foundation, a curriculum that aims to take kids “who are not necessarily enthusiastic about their education process and introduce them to alternative career choices in snowboarding and skateboarding to bring that application back,” Danny says. “The foundation is a product of all the time that I’ve worked in youth development through snowboarding.”

In 2010, Danny moved away from Burlington, VT and temporarily found work in New York City as the senior program manager of a similar action-sports-based youth development program called Stoked Mentoring. Danny has since moved to Beacon, NY to work there and in the nearby town of Poughkeepsie, both of which are areas with high crime and dropout rates. Given his recent work experiences, Danny saw a new approach to helping the community, which ultimately led to the birth of SHRED.

The SHRED Foundation operates on three pillars of motivation: Fear, Fail and Flow. The pillars represent the sequential stages a fledgling snowboarder goes through, from their first try to when they can confidently apply their skills around the mountain. When a new rider is introduced to snowboarding, falling is a certainty, and failing is a possibility. “But the failure is the growth process,” Danny says. “Once you go through that growth process and you get it, that’s when it becomes more effortless, and then you’re flowing into it.”

The pillars of motivation in SHRED are emblematic of the countless obstacles Danny’s students will have to overcome in life. Whether they’re tackling a new subject in school, finding their balance through the kinks of a new job or building a portfolio and applying to college, work ethic and perseverance will be invaluable. Aside from on-slope time, SHRED participants engage in writing and art workshops designed to prepare them for internships and employment opportunities within the snowboarding industry, essentially creating what Danny calls a “snowboarding tech school.” Industry experts such as photographers, journalists, videographers and the like serve as guest speakers in the workshops to provide students with real-world success stories.

In June of 2016 Danny was appointed program director of the Boys & Girls Club of Newburgh. An alumnus of the club, Danny is ecstatic to be giving back to the community via a program that was so influential in his own upbringing. He is grateful for the club’s support of the SHRED Foundation, as it assists in providing resources that will help the foundation thrive. Danny has a long-term goal of making the SHRED Foundation’s curriculum a permanent part of the Boys & Girls Club organization, and to create a model program that can be replicated by other Boys & Girls Clubs across the country.

“I never really offer my opinion too much when it comes to snowboarding because I feel like I haven’t been in it long enough,” Danny says. “But I do know enough to understand what makes it special. I picked it up in my 30s, and with it having enriched my life so much in such a short timespan, I can only imagine how things would have gone if I’d had this outlet as a kid.” 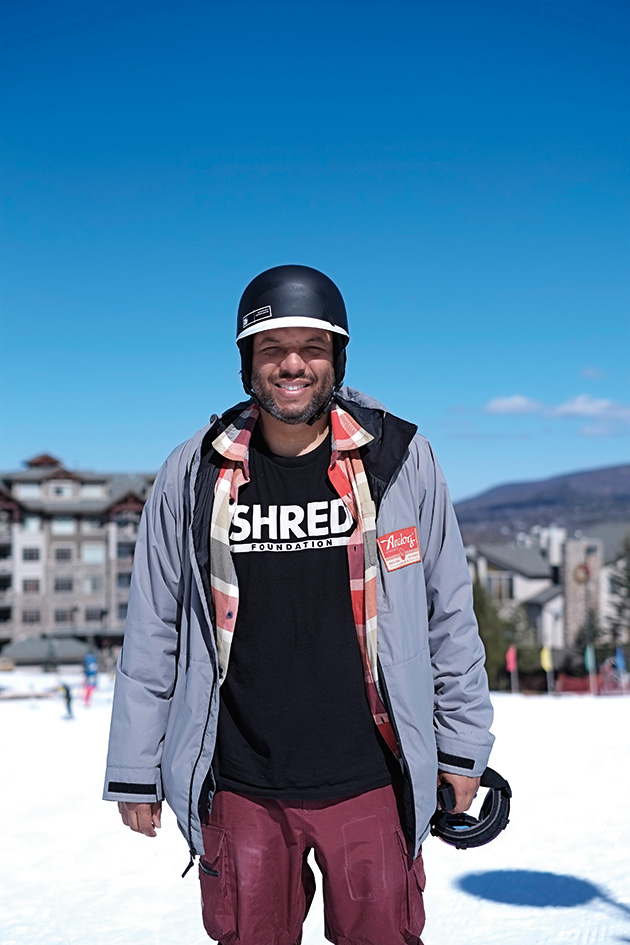 The SHRED Foundation is accepting hard & soft goods donations to help gear its participants up for the slopes. Donations can be sent to: 94 Prospect St., Beacon, NY 12508. Learn more and get involved at shredfoundation.org.

This story originally appeared in The Snowboarder’s Journal Volume 14 Issue 3.