ABOVE: "Marie-France Roy and Kael Martin enjoy a little après on the final day of a hut trip in BC's Coast Mountains. Over the years, Marie, Kael and I have been on some great adventures. We've grown to trust each other while exploring off the grid, and the downtime has led to a lot of important conversations and lasting, meaningful friendships--as well as plenty of laughs." Photo: Colin Wiseman

There are countless examples of ingenious artists, actors and creators who have famously struggled with mental illness. This centuries-old pattern has inspired studies on the connection between creativity and depression, and evidence points to a strong one. Neuroscientist and author of The Creative Brain, Nancy Andreasen, suggests that while mental flexibility proves beneficial in most aspects of life, creative brains are also more prone to mental illness. Negative thought processes can result from overwhelming stimuli circulating the brain, coupled with an increased sense of vulnerability that often comes with living as a highly original individual. “This flexibility permits them to perceive things in a fresh and novel way, which is an important basis for creativity,” she writes. “But it also means that their inner world is complex, ambiguous… While less creative people quickly respond to situations based on what they have been told by people in authority… the creative person lives in a more fluid and nebulous world.”

Less likely to lap up the status quo; more likely to be inquisitive. Sound familiar?

The topic of mental health has become an increasingly public conversation—in certain demographics more than others. Artists, writers and creators have led the charge, which makes sense given their work’s intent to resonate on such intimate levels. But destigmatizing mental health issues hasn’t come very far in athletics, yet. With pressure to constantly improve performance and immense value placed on being tough, the “it’s OK to not be OK” mantra doesn’t quite fit with most sports cultures.

As snowboarders, we’re both artists and athletes. The latter in each of us generally opts to tough things out. While I appreciate snowboarders’ ability to take a hit, I fear this theme of resilience may bleed unhealthily into other aspects of riders’ lives. We know you can’t just spin a 720 without practicing, failing, forgiving yourself and trying again, and that a crippling ankle needs to be tended. It’s time we take that understanding and apply it to our creative brains.

I’ve lived with anxiety and severe depression throughout various stages of my life. At times, short of getting intoxicated, snowboarding was the only thing that could cheer me up. Snowboarding reminded me of my ability to enjoy the natural world when I thought I’d lost it entirely. I came to find more sustainable solutions off the mountain, but this aspect of my life will forever be a work in progress. Counseling and other lifestyle changes proved imperative to my journey with mental health, but if it weren’t for snowboarding—the videos, the people, the optimism it gave me in my darkest days—I don’t know if I would’ve made it long enough to figure that out. Having since taken comfort in discovering that snowboarders I’ve looked up to are dealing with similar issues, and having felt an overwhelming sadness in losing fellow riders due to struggles with mental health, it’s time to add my voice to the conversation. In the same way our community has begun to make strides in destigmatizing other stifling societal perceptions, we should continue breaking trail on discussing the importance of mental health.

There are limitless factors that can lead to mental illness—both internal and external—and because each individual experience is so subjective, overarching generalizations should be avoided. Despite dealing with some of these demons myself, I won’t pretend to have it all figured out, because no one does. These words simply serve to continue this important conversation and further destigmatize the taboo topic.

Snowboarding can provide relief to those in need, but can we actually consider it a cure? Sort of. It’s really just one block of a larger takeoff, one that we can build upon together. Let’s keep talking about mental health, destigmatizing its adverse connotations, and encouraging each other to seek care when necessary. Let’s be leaders in the athletic sphere on this front. Let’s let each other know it’s OK to not be OK, which might help even the last person you’d expect needing to hear it. In doing so, it won’t just be snowboarding saving lives. Instead, it’ll be us: snowboarders. 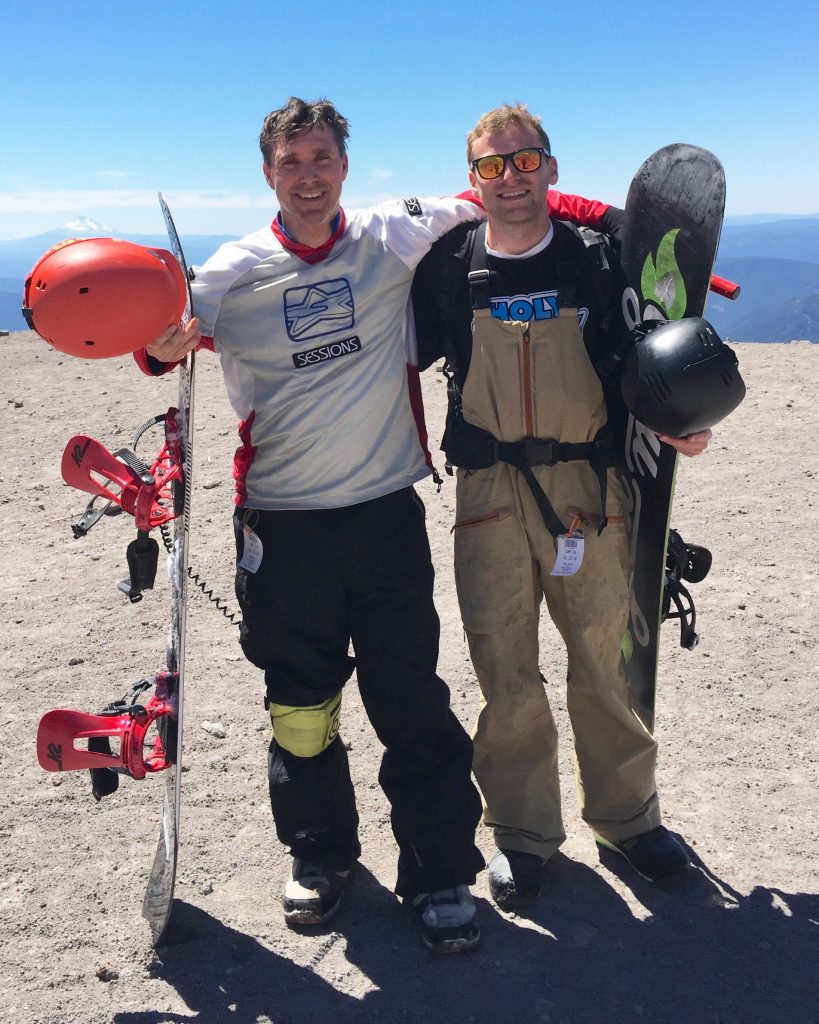 ABOVE Travis Parker (left) and the author, Ben Shanks Kindlon. “I’ve always looked up to Travis Parker as one of my all-time favorite snowboarders,” Ben says. “When Travis was brave enough to open up about his mental health in our interview for Issue 16.4, the respect I have for him grew even deeper. Now I’m taking another page out of his book and opening up about my own issues with mental health in the hopes of further normalizing this conversation in the snowboarding community, and inspiring whoever could benefit from it to get the help they need.” Photo: Andy Glader

This Editor’s Note first appeared in The Snowboarder’s Journal Issue 18.3, published in December 2020.