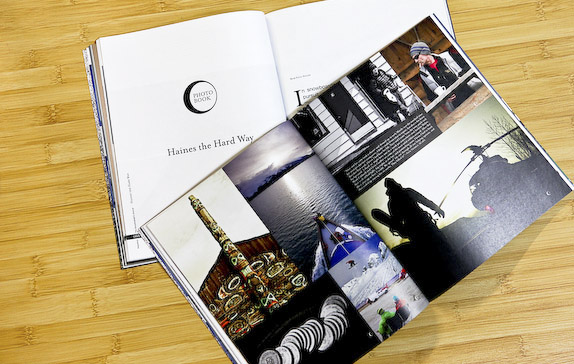 In the heli world of Haines, Alaska, the town itself can sometimes be forgotten–too often in snowboard media we only hear about the perfect bluebird days. When Nico Nolan and his crew arrived in Haines to ten days of snow, they thought their trip was a bust. But the genorosity of the town of Haines turned a ten-day storm into a six week epic and revealed the true character of Haines–the people, the town, and the surrounding mountains.

There were just three of us sitting in the cabin of the boat: Nick Trimble, Bruce Bauer and myself. Trimble resembles the hybrid of a Yeti and a Kodiak Bear, and Bauer is Haines’ version of a pirate. Both are quintessentially tough individuals, right down to their voices. Bruce had a Camel cigarette that was almost all ash hanging off his lip, and Nick was loading clips into an AR-15 semi-automatic rifle, with a .44 Magnum and a 12-guage sitting next to him. The rest of the group was out on the boat preparing crab pots and drinking beers, preparing for the forthcoming artillery sesh.

The moment came when both of them asked—or rather yelled over “Soul Kitchen” by The Doors—“What are your plans now?”