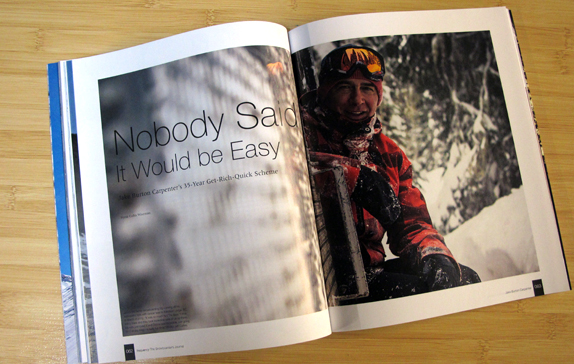 Since his first experiments with a Snurfer in Long Island, NY, Jake Burton Carpenter has defined the world of snowboarding. From lonely beginnings in a Londonderry, VT barn to the ends of the earth, Burton describes a lifetime of standing sideways.

It is a mid-October afternoon in Stowe, VT, and the leaf peepers are out in full force. Even though the New England pallet of reds, oranges and yellows has dimmed in the past week, retirees with New York plates bring traffic to a crawl in front of the Vermont Ski and Snowboard Museum—an innocuous, three-story colonial building along Stowe’s main drag. The museum is closed on Tuesdays, but we will be receiving a special tour of the newly-installed Burton Snowboards exhibit. A tour led by Jake Burton Carpenter himself.

Burton arrives fifteen minutes late, fresh out of another fall meeting as his company preps for the 2012-13 season. Touring the exhibit with Jake is like paddling out at Diamond Head, HI with Duke Kahanamoku or walking the backyard pools of Venice, CA with Stacy Peralta—a history lesson straight from the source. Yet within minutes I forget that I am talking to the CEO of the largest company in snowboarding. Dressed in an AK puffy and beanie, Burton hardly looks his 58 years and moves with relaxed confidence from board to board. He admires his early creations with casual interest, ticking off milestones for the company that he started in a Londonderry, VT barn in the fall of 1977. There’s the fiberglass experiment, birthed after midnight in John Mel’s shaping room; the pile of ash wood blanks that never made it to the press; the first neoprene bindings; the Mystery Air that helped modernize freestyle snowboarding. Through 35 years of explosive growth, innovation, team building and cultural evolution, Burton has remained committed to his company—he has built an industry giant while staying true to his roots…