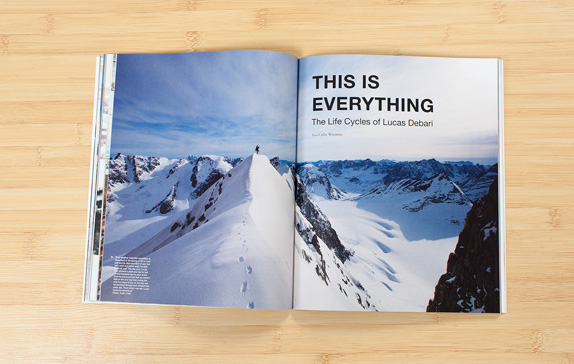 Since he first strapped into a snowboard at the age of 4, Lucas Debari’s life has been defined by the mountains. From his home of Glacier, WA, to improbable Olympic hopeful and, now, freeride film stardom and far-flung expeditions on all corners of the globe, it hasn’t always been an easy path. Lucas talks about growing up in the shadow of the Mount Baker Hardcore, redemption at age 18, the evolving role of pro riders and beyond.

Lucas and his sister Maria are just getting rolling on a two-week tour of BC’s interior. Towing a sled behind his Mercedes Sprinter van, their next stop is Nelson, where they’ll prepare for the week-long Canadian Avalanche Association Level 1 course, the first step towards professional backcountry work. Bad weather is not good news.

Still, Lucas is taking it all in stride. The snowboard hell comment is part joke, part reality. It’s not the first time he’s dealt with difficult conditions. Less than a year ago, he spent a month in Greenland getting largely skunked by warm weather. He’s been doing a lot of expeditions over the past several years, putting adventure boarding ahead of powder boarding as a priority. This year was supposed to be his return to fall-line freeriding. So far, Mother Nature has not been cooperating.

“Where’s it snowing,” Lucas asks. “Japan? Should we go to Japan?”