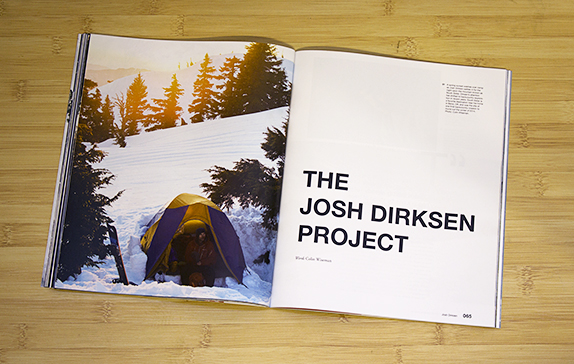 For Josh Dirksen, it’s always been as simple as edge control. What began at Mt Bachelor, OR, led into X Games appearances and freestyle film parts with Mack Dawg and Kingpin Productions, Robot Food, and eventually backcountry-driven pursuits. But through it all, there has been that modest constant—just carving a snowboard through all conditions, seeking new perspectives on the old subject of finding momentum. Now 38 years old, Dirksen continues to find creative ways to inspire future generations and to lend a fresh perspective to the sport he knows so well. Two decades and counting of the Josh Dirksen Project.

“That’s where you first went backcountry snowboarding, isn’t it, Josh?” Mike Dirksen says. He’s helping us set up a lightweight tent halfway up central Oregon’s South Sister, having already rolled out his bivy bag in a nearby stand of trees. “Yeah,” his son replies with a smile.
“I think that’s where we first went snow camping, too,” Mike says.

He is referring to Bohemia Mines, a small protrusion to the west, out past the craters and obsidian expanse of South Sister’s Rock Mesa—a vast plateau formed during an eruption 50,000 years prior. Eight or 10 miles to the southeast sits Mt. Bachelor. That is where Josh launched a snowboard career spanning the better part of two decades…Subscribe to start your collection of frequency TSJ.