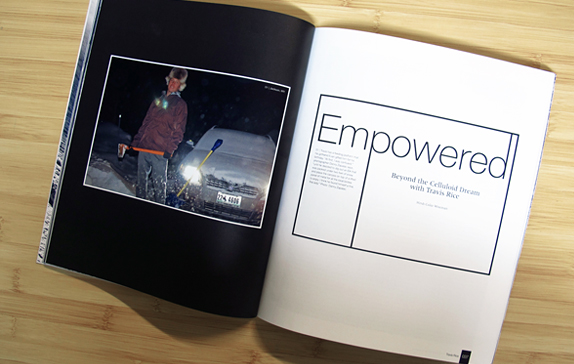 There’s no doubt that Travis Rice is one of the greatest snowboarders of our time. But there is more to Rice than his backcountry exploits. from Brain Farm Cinema to Asymbol Gallery and now his Supernatural Selection contest, Rice is well aware of his place in the snowboard world–and his ability to create a public vision of snowboarding that goes beyond made-for-TV contests and triple corks. frequency TSJ’s Colin Wiseman on the empowerment of Travis Rice.

It’s late in the evening at Travis Rice’s three-story ranch house outside of Jackson Hole, Wyoming, and Rice is planning for the morning. John Jackson is teaching photographer Danny Zapalac how to play a djembe drum while Rice talks on the phone. He turns to me: “I’ve got you a sled for tomorrow, my old machine from two years ago, but there’s one catch: if you wreck it, you pay for it.”

Being a relative rookie when it comes to snow machines in the backcountry, I shoot an apprehensive look.

He’s right. Jackson is in the midst of a mid-winter storm cycle and the Brain Farm crew has their favorite backcountry zone dialed in with pillows, cliffs, and a handful of two-story booters ready to go. Mark Landvik is posted up in town and ready to meet us in the morning...