“Whoa. That thing is really cool,” the homie Mark said after I gave him a brief rundown of how to use the Insta360 One X2 camera. I was just starting to think the same thing. Mark and I geeked out on it a bit while sitting in a snowcat that was shuttling us and a dozen friends to the top of another deep run at Keefer Lake Lodge, BC in early January. I placed the Insta360 One X2, attached to a collapsible Insta360 Invisible Selfie Stick, securely into my backpack next to my shovel and probe—easily accessible and I couldn’t even notice the weight difference. The cat came to a stop, our guide opened the door and the clouds broke just as we all filed out and grabbed our boards. Zoë Vernon and I agreed that she’d set the track and I’d do my best to keep up and shoot a follow-cam angle. The results were stunning.

ABOVE The very first follow-cam the reviewer captured with the Insta360 One X2. The camera is  very user friendly. In addition to being set up to allow users to figure it out rather quickly, the app provides tutorials, tips and techniques, some more advanced than others. It also connects a community of Insta360 videographers and photographers for everyone involved to gain further inspiration from each other.

Now, I could go on and on about the specifications of the camera, but I’ll just list those below and instead tell you about the experience we had using the Insta360 One X2. I say “we” because this little piece of technology really did add a lot of fun to the whole crew’s collective experience. After filming the follow-cam, we hopped back onto the cat, and I immediately synced the camera with my smartphone using the Insta360 application. I downloaded the file from my camera within seconds, edited the clip right on my phone, then had it saved to my library a minute later. Passing around the phone to have people sample the footage led to some oohs and ahs, everyone was stoked on it, and amazed that we were reviewing it before even putting our gloves back on for another run.

Since the camera is constantly filming with a 360-degree field of view, so long as you’re close to your subject, it’s near impossible to blow the shot. At one point of the follow-cam with Zoë, she dips right around a tree that I would’ve crashed into had I tried to follow. In the original playback, she rides completely out of the frame. Although, when I went to edit the clip, I was able to drag the marker mid video so that it smoothly pans with her. Another fun way to do it is letting the clip play on your phone, recording it, and then manually moving your phone around to keep the subject within the clip—kind of like you’re pointing your phone’s camera to choose the angles of the clip you already filmed (trippy, right?).

ABOVE The video recap from a trip to Keefer Lake Lodge. The follow-cam footage was captured using an Insta360 One X2 by the reviewer. See the full trip recap here.

If I were trying to shoot the same follow cam with a camera that wasn’t recording in a 360-degree field of view, I’d have tried my best to point the camera in her direction and guess where the frame would be, all while trying to see where I’m going, not crash, and maintain enough speed to keep up with Zoë. This likely would have resulted in a terrible bit of video footage. So, the 360-degree field of view actually helps to alleviate a lot of the traditional stress that generally comes with being the filmer in a situation like this. Another fun perk that comes with filming in 360-degrees: even though I set out to film a follow-cam, I rode away with a selfie-cam video from the very same recording (#mediahour). I especially loved that the Insta360 One X2’s software automatically removes the selfie-stick from the video (or image, if you were to shoot a photo). *Peh-kewwww* — Mind blown. This feature also works with the Unicorn Helmet Mount, which I haven’t tried yet. Although some onlookers may have a chuckle, whatever, the footage can be pretty rad. It almost looks like you’ve got a personal drone flying above you to capture the shot.

ABOVE Zoë Vernon, left, and the reviewer, Ben Shanks Kindlon, right. These two clips, one follow-cam and one selfie-cam, both came from the very same run and recording.

I spent that day in the Monashee Mountains simply riding, enjoying myself and shooting several follow cams, which proved a very welcomed respite from lugging around my usual DSLR setup to capture photos. The only bummer with using the Insta360 One X2 came when I was getting a little kooky on a sidehit, rolled the windows down, and perfectly caught part of the camera lens on the edge of my board. Thankfully, it could have gone a lot worse, the scratch is hardly noticeable, and if an upcoming shot is super important I can learn which side of the camera to keep pointing down and frame the end result correctly in post. But after that mishap, I’m surely going to get a few Insta360 One X2 Sticky Lens Guards, something I didn’t know existed when I was sent this camera. Yes, disclaimer: I was sent this camera for free. Although, I would still wholeheartedly, guilt-freely recommend it to anyone who’s been considering buying one. I’m not exactly sure how it stacks up to its competitors regarding all its fancy specs and features, many of which I’m still just learning about, but it gets the job in up to 5.7k resolution and, with its small oblong shape, fits comfortably even in something as tight as a pants pocket. 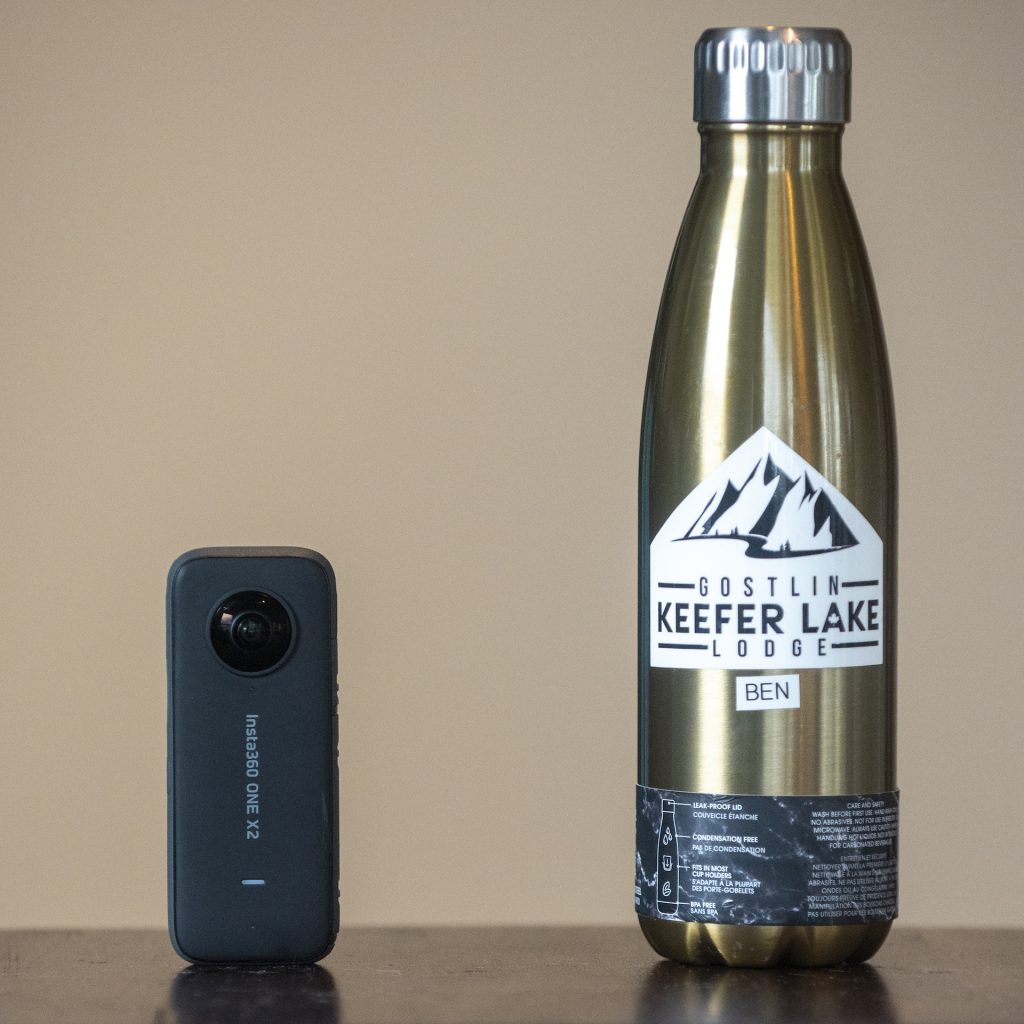 Using the Insta360 One X2 makes me think back to the days before I shot snowboarding photos, but spent loads of time capturing clips on a GoPro on a selfie-stick that I’d macgyvered using a mount and my mom’s old broken ski pole. My buddies and I used to point it and hope for the best, then check the footage once we got home, often to see that we blew the shots time and time again. Boy, what we would’ve done for this technology back in our college park rat years. I have noticed the Insta360 One X2’s growing popularity in snowboarding, seeing more of them being used in person and in videos. Geoff Brown’s got one mounted to the side of his helmet in this episode of “Out of Service” that just dropped (you can see it at 5:59).

I still plan to spend most of my time shooting still images with my DSLR, but I’ll be sure to have my Insta360 One X2 and the selfie-stick in my camera bag or backcountry backpack just about every time I head to the mountain. I’m looking forward to utilizing it to document adventures at sea-level and beyond, too. It only took a matter of minutes to go from pleasantly surprised to completely blown away by the power of the Insta360 One X2, and that sense of appreciation, awe and excitement grows with each new feature I tap into. Mark was right. This thing is really cool.