I’m not an overtly religious guy, but will openly admit that I believe in karma. You know, the whole, “what goes around comes around,” ideology. I don’t know what enforces it, but I sure as hell believe in its energy. Plenty of times I’ve witnessed what seems to be karmic payback—in instances both good and bad—as I’m sure you have too.

I’m not an overtly spiritual guy, either, but will openly admit that I hold some arguably hippie-dippy beliefs. One of these beliefs is that mountains are sentient. Each mountain has its own thoughts and, most importantly, feelings. With that in mind, I think it’s best not to piss them off. That’s why I carry a portable pocket ashtray with me every time I go snowboarding. 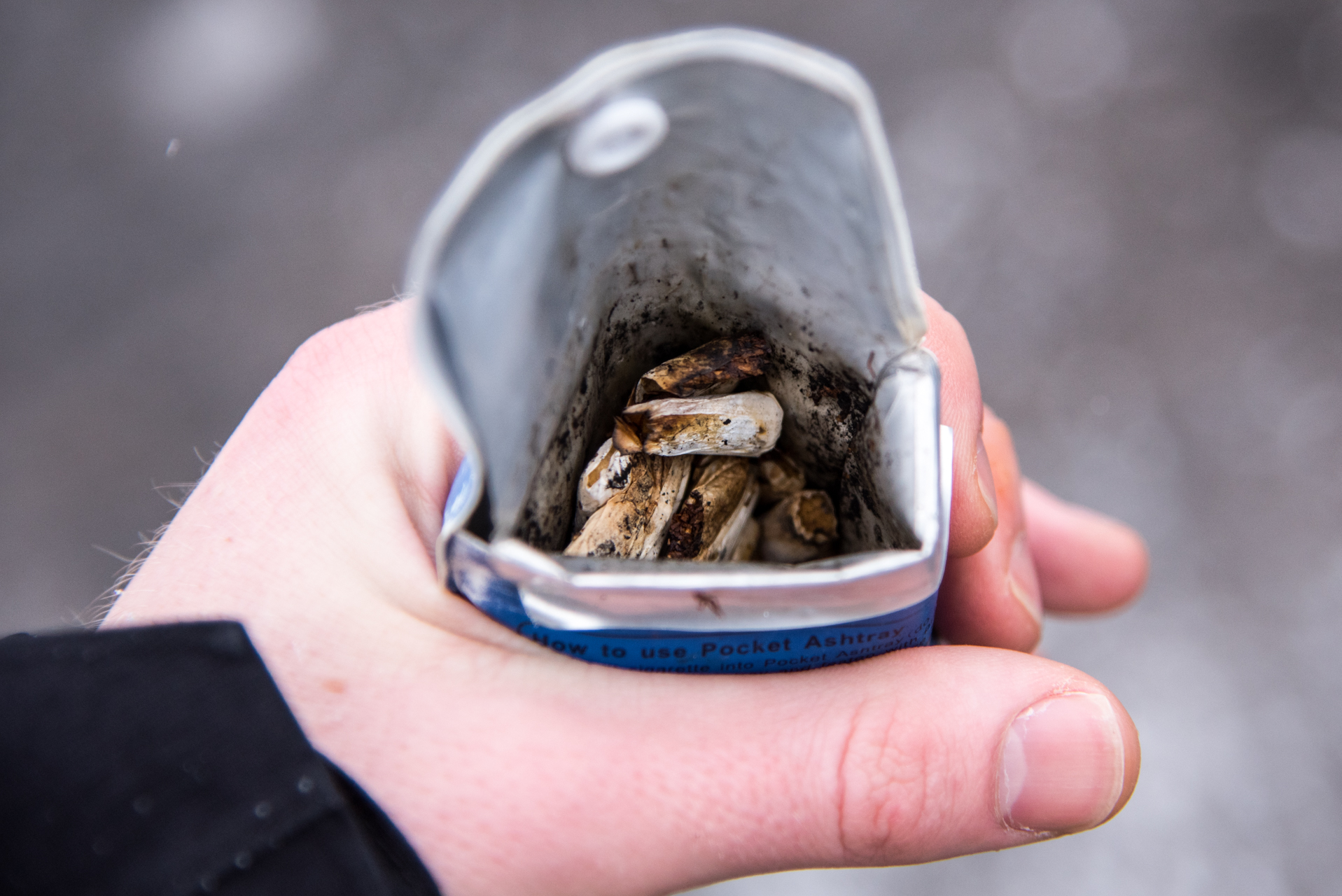 ABOVE Pack out what you pack in. It’s not a hard concept.

I was first introduced to pocket ashtrays while visiting my brother during his college semester abroad in Rome, where pocket ashtrays are often handed out to smokers in hopes of keeping the city cleaner. The one I carry on me came with a pack of Marlboros at the 2016 Pemberton Music Festival in British Columbia, and it’s been going strong for nearly two years. The ashtray is nearly unnoticeable in the confines of any snowpants or jacket pocket as it weighs next to nothing and is roughly the size of a pack of gum. It’s built with ethylene-vinyl acetate, fireproof sponge and an aluminum foil fabric designed to trap smells, thus eliminating the problem of disgustingly stinky outerwear that results from simply pocketing used cigarette butts (a leading factor in skiers and snowboarders littering cigarette butts, despite the inconsiderate irony of the action).

In March 2017, following a deep day at the Mt. Baker Ski Area, I found myself in the parking lot, smoking with friends. I pulled the square, snap-closing pouch from my pocket and offered to dispose of everyone’s cigarette butts. Without anyone asking for it, I also offered my regular rant on the importance of packing out what we pack in, my thoughts on karma, and on the sentience of mountains. Some chuckled, and joked that there may have been something more than tobacco in the smoke I just finished.

Not even a minute later, I looked down to see a $10 bill nestled beneath my boot. “Does this belong to anyone here?” I asked around. Everyone replied along the lines of, “Nope, all you. Your lucky day!” A freak chance? Hard to say. But when the exact same thing happened in a near-identical situation just one week later (I kid you not, except the second time it was a $5 bill), it surely seemed like something more than coincidence. One thing’s for sure: I’ll continue using the pocket ashtray while I’m enjoying time in the mountains, as I’d hate to see the kind of karma that may come with doing the opposite. 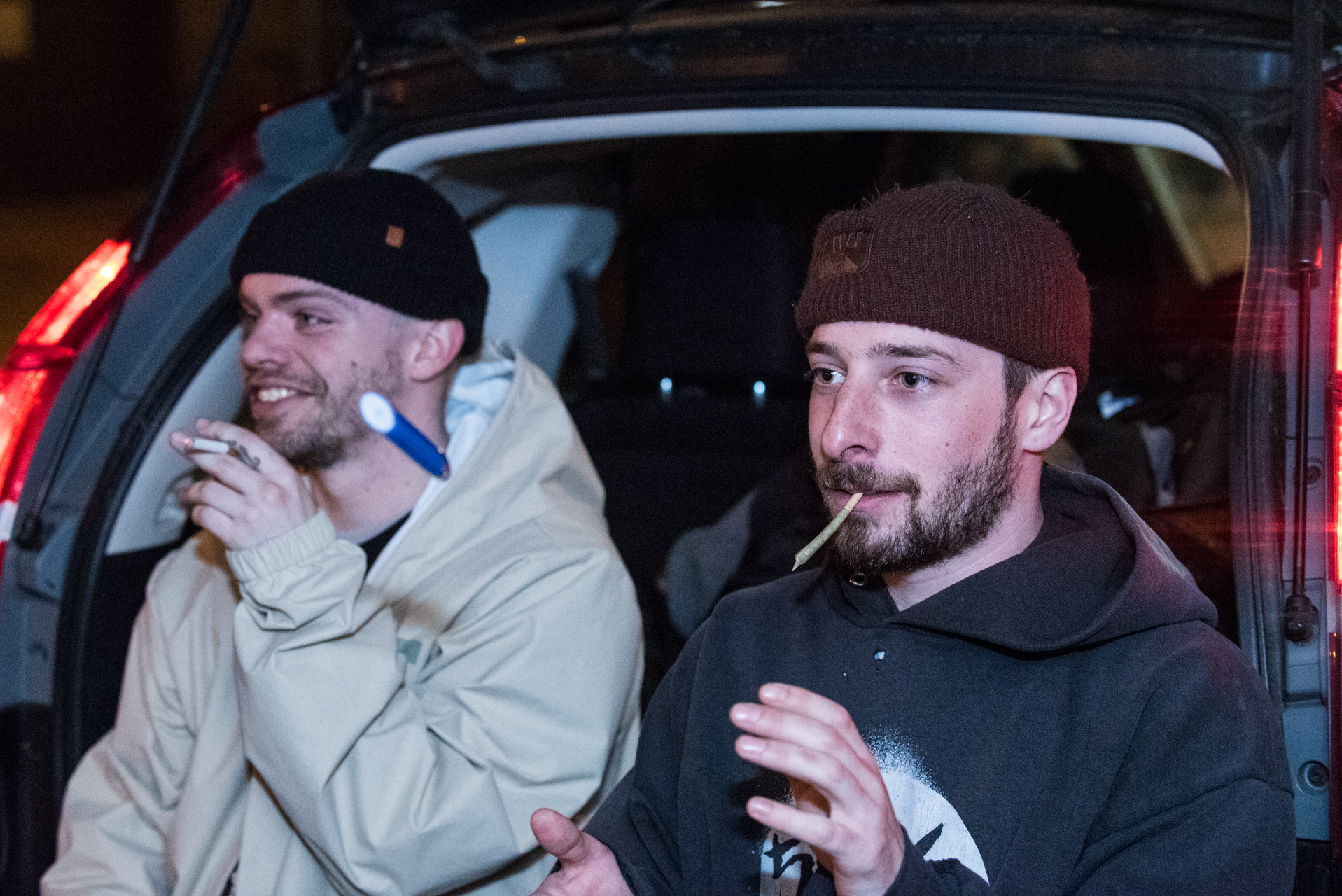 Pocket ashtrays can be found online or at various gas stations and smoke shops for around $2 to $5. It’s a small price to pay to keep the mountains that much cleaner, and karma that much more on your side.

Years smoking: Too many