I can relax as well as a dog can juggle. My mind races with something to the effect of, “What next?” throughout any activity that isn’t snowboarding, so simply sitting around has never been my strong suit. In lieu of experienced symptoms that many whitecoats would refer to as ADD, when I went to the Ten Thousand Waves Japanese Spa on the way down from Ski Santa Fe, NM, I knew I’d be hard-pressed to hangout for our tour group’s allotted three-hour stay. Yet the challenge I encountered there proved to be an unexpectedly enlightening experience. 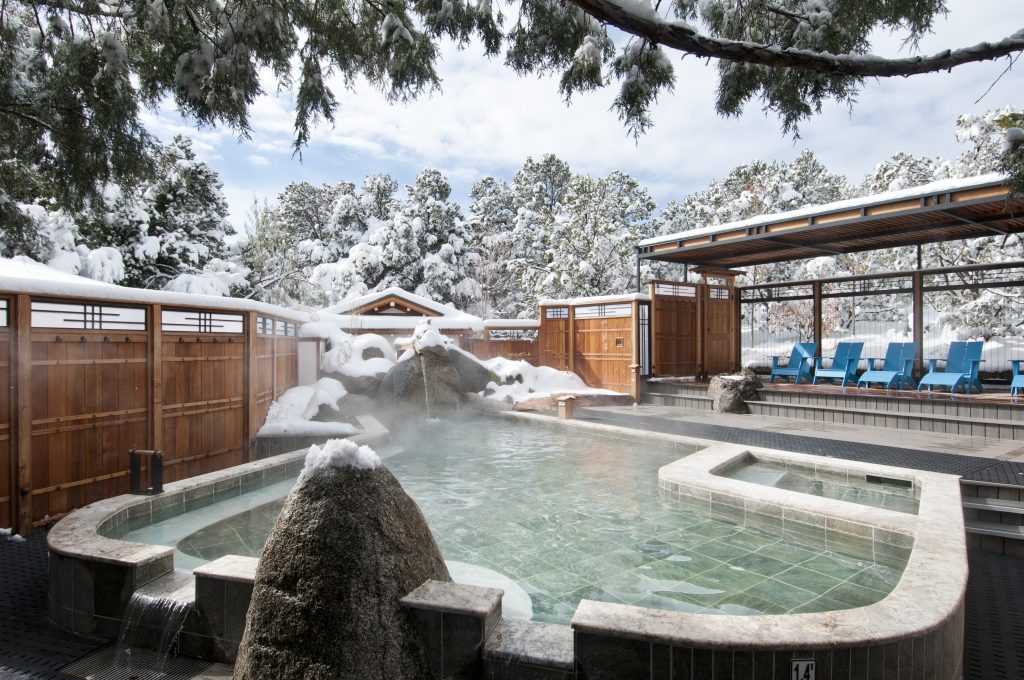 ABOVE The Grand Bath. The smaller section holds ice cold water, not for the faint of heart. Photo courtesy of Ten Thousand Waves

Modeled after Japan’s hot springs (or onsen, as they’re called), Ten Thousand Waves aims to transport you from the Land of Enchantment to that of The Rising Sun. After a quick shower, I made my way past foot-bathers and a koi pond towards the Grand Bath, essentially a giant outdoor tile hot tub. Although there were no monkeys hanging around this hot tub, the surrounding Sangre de Cristo scenery made up for their absence. Soaking in the warm water was surely a peaceful contrast to bombing down the fast, hard-packed groomers we rode at the resort just before coming, but after 15 minutes or so I’d grown uneasily bored. What next? 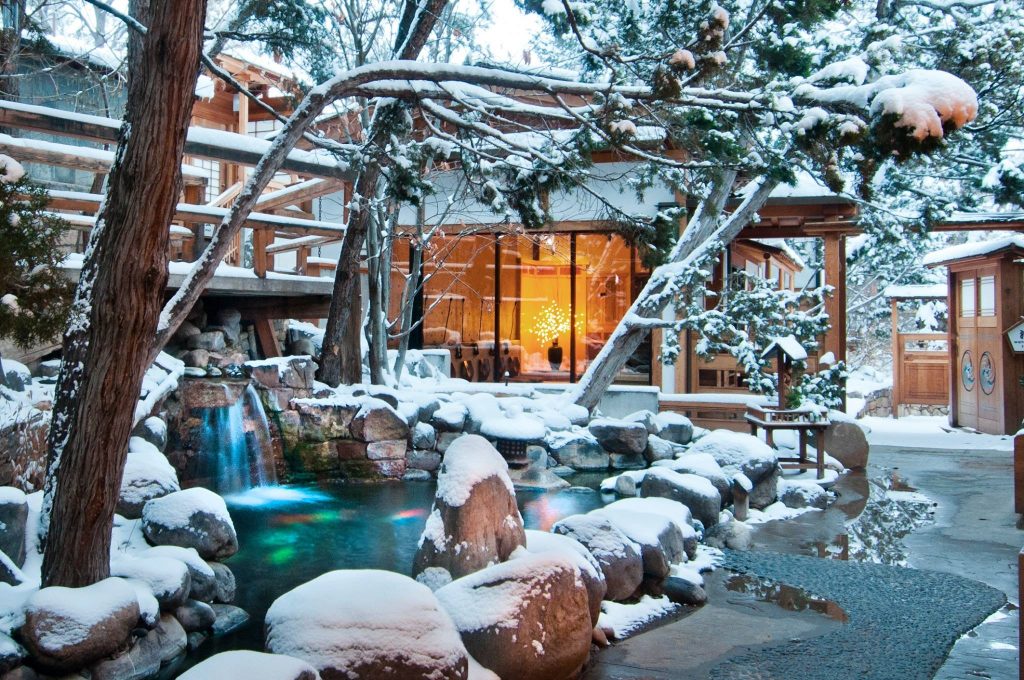 ABOVE The koi pond, and in the back is the silent meditation room. Just out of frame on the right lay the foot baths. Photo courtesy of Ten Thousand Waves

I moved from the Grand Bath to the sauna to the foot-baths, cycling through the various amenities before others had even moved on from their first stop. Following my second sauna session and soak, I headed to the most boring amenity of all: a silent meditation room. Despite snowboarding all morning long, this is where I encountered my greatest challenge of the day. 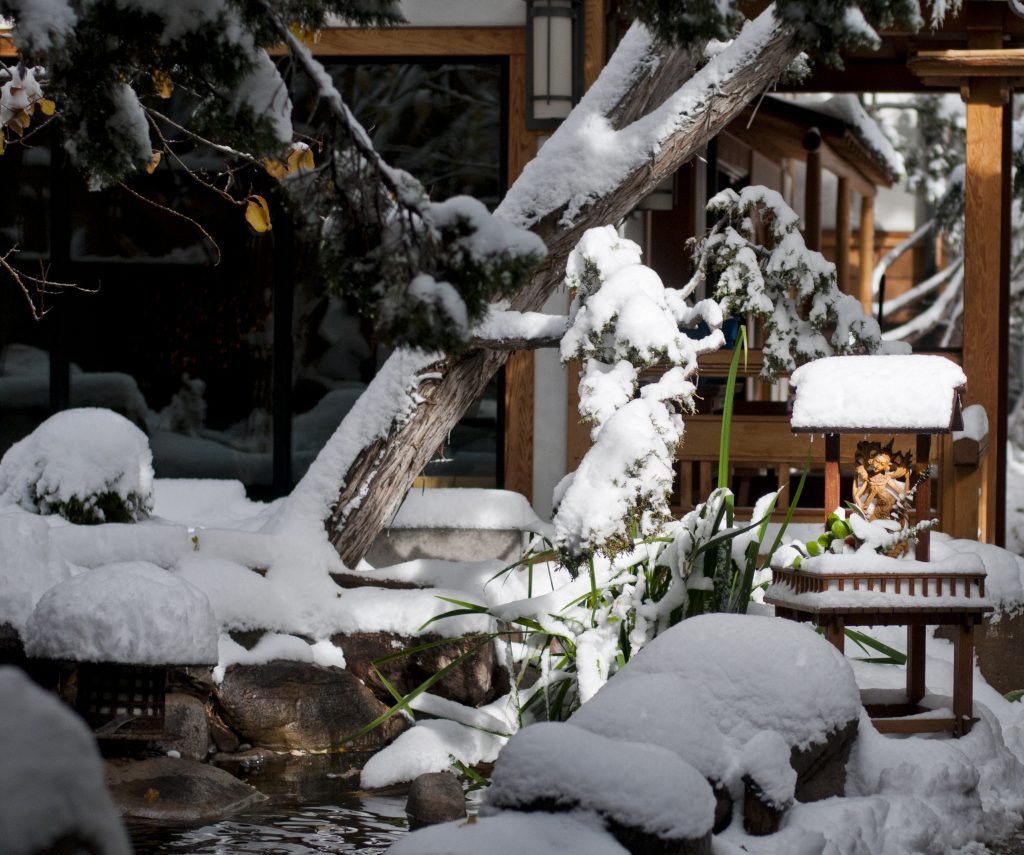 ABOVE A closer look at the pond on a snowy afternoon in the Sangre de Cristo Range. Photo courtesy of Ten Thousand Waves

Chances are you’ve heard the term “Zen” before, perhaps in regards to a mysterious master of martial arts, or maybe in regards to motorcycle maintenance. Zen is a Japanese word deriving from the Chinese word “Chan,” subsequently derived from Sanskrit’s “Dhyana,” which translates to meditation. The aim of Zen is to free your head of all thoughts, leaving your mind completely void of distractions, in time it allowing it to focus more fully on tasks at hand.

Sitting in half-lotus position on the bamboo floor, I put on a pair of provided headphones hanging from the wall and quickly realized that my introduction to Zen meditation was long overdue. As the sounds of babbling brooks meshed with soft, symphonic sounds in my eardrums, I tried clearing my mind and was unequivocally unable to do so. Thoughts popped into my head faster than corn kernels exposed to microwave radiation, and it occurred to me that this state of unrelenting thinking was a constant in my life. Never was there a moment that I didn’t spend thinking—subconsciously or not, a never-ending stream of cerebration. All that thinking about thinking got me thinking: How much better at snowboarding would I be if I could effectively shut these thoughts up? 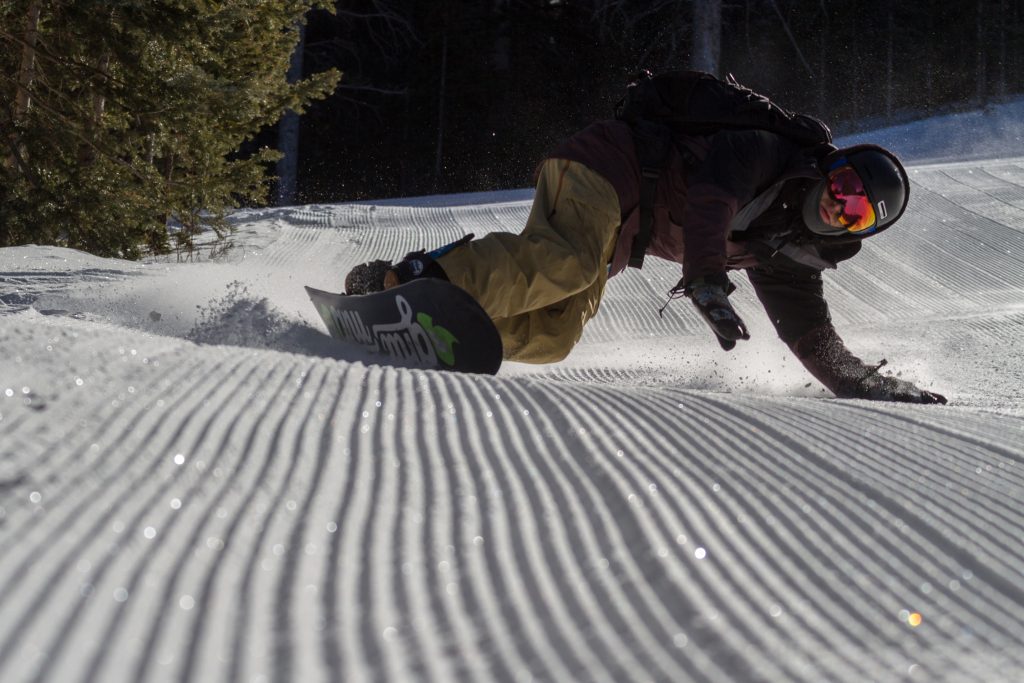 ABOVE The author carving fresh corduroy at Ski Santa Fe, NM. The groomers at this little family ski hill are on point. Photo: Andrew Marshall

To truly succeed in placing mind over matter, we’ve got to trust our motor skills, and sometimes even be surprised at what we manage to pull off. Confidence is key and, as many of us know, hesitation is usually a major factor in falling. It’s that little voice in our heads that points out the consequences of a potential crash, screwing things up before we even drop in.

Think about the times you’ve been psyched out by a sketchy line and started snowboarding worse than you have in years, all due to fear. Sure, snowboarding is a physically focused art, but the mental aspect isn’t just worth noting: it’s worth training. I didn’t expect to have such an eye-opening revelation at the spa, but epiphanies present themselves at funny times. I left Ten Thousand Waves feeling rejuvenated from the soaking and sauna sessions, and grateful for the meditation experience, looking forward to strengthening my mind through practice in months to come. Now all I need is my own koi pond.

Special thanks to Joanne Hudson and Tourism Santa Fe for facilitating the trip to Ski Santa Fe and the spa.