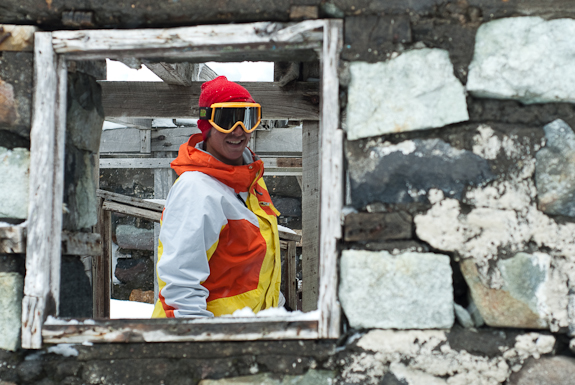 I first met Aaron Robinson in Farellones, Chile in 2009—we were down there for a catalog shoot with K2, and it was the first day of two weeks on the road. We spent the afternoon shaking off jet lag and searching La Parva for something to ride with a crew 10-deep, but it was pretty bleak—the infamous Andean wind had scoured the mountain to sketchy hard pack and rocks. Still, we rode until 4pm to get our legs back and get to know each other, jibbing a little gully ‘til the pomas closed.

Upon returning to the hostel for dinner, Aaron was missing. Former K2 Team Manager Kevin Winkel set to stressing out about his whereabouts for several hours before Aaron appeared out of the alpenglow, a huge grin on his face. He had hiked the imposing chute of McConkeys, and returned with point-and-shoots of amber-hued powder spray, evidence of his first real turns in Chile. It was indicative of Aaron’s approach to life—always finding a reason to smile, always making the most of the day. Throughout that trip, he stayed positive despite sometimes suspect conditions, approaching every day eager to make most of it, learning how to talk to the senoritas in their native tongue, throwing himself into local culture with genuine interest and enthusiasm. With a positive outlook comes positive experiences—Aaron knew, more than anything, how to enjoy his place in the present, and it rubbed off on everyone around him.

Through the past several years, I was lucky enougn to ride and travel with Aaron in his home state of Montana, the Cascades and beyond. The positive energy never waned—with an innate sense of speed and terrain, his effortless flow on the mountain matched his effortless flow in life. Indeed, Aaron was a great ambassador for snowboarding, for freeriding, and for humanity as a whole.