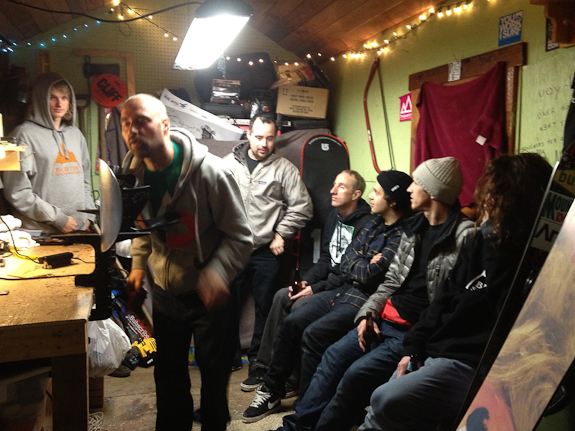 I remember that day like it was yesterday. I remember the nervousness, the fear, the lack of breathing. But it didn’t matter, I was committed. There was no turning back now. As I pushed away from the safety of the little starting shed and dropped into turn one, the fear disappeared. By turn two, the nervousness had faded. By turn six, my breathing became deeper and I began to relax. Adrenaline kicked in and, by the end, I was tired but having the time of my life.

I instantly began to understand why Craig Kelly, Terje, Temple and so many other of the world’s greatest snowboarders kept coming back. The anticipation at the top, that arc into the first turn, holding on by the tree, crossing the finish line, the gathering of friends, deep powder on the arm, the salmon, hanging with the Dobis’, the smiles of Gwyn, Amy, Nicole, Britt, and Parker. This was their tradition–and suddenly mine.

I remember feeling a bit empty after it was all over; but then I remembered that it would all happen again next year. Same time, same place–the tradition had begun.
Before I went to my first Mt. Baker Banked Slalom, I went to BikeFactory in Beelevue as a grom to get some wax. I walked into the shop and began to look around. I walked up to the counter and asked the gentleman behind the counter for something fast. He gladly pulled some out of the case. As I was paying, I mentioned that I was doing my first Baker Banked Slalom. He looked at me, smiled and said, “I know that race well and have the perfect wax for you.”

He went to the back room and came out with a secret powder for my base. He introduced himself as Bob Barci, and said he had helped start the Banked Slalom a few years back. He wouldn’t charge me for the wax and wished me luck. I still have the cannister of secret powder to this day. That year I saw Bob up there at the race–it was also his tradition.

The next year I found myself in Glacier again for the slalom. That year, I stayed with the Dobis’ who own the Mt. Baker Snowboard Shop. I remember being in the back of their shop as Craig Kelly waxed his board. He spent two hours minimum every night getting it ready for the next day’s race; that was his tradition, and it soon became mine. Every year thereafter, racers by the hundreds would go the Mt. Baker Snowboard Shop and tune their boards. George would have a bonfire going and a pig roasting, Bobi and Marcella would be making us all feel at home, and we would all just be hanging out amongst friends enjoying our tradition.

Twenty years later, some things have changed. We’ve lost Craig, George, and Bob, but they are still here with us every year. They will always be a part of our tradition. I’ve since built a little waxing shed at my house in Glacier, and I gather their with my friends and their friends and we wax and tune our boards, tell some stories, and drink some beers. Every year, we gather and head to Mt. Baker for the greatest weekend of the year. We enjoy the friendships, the laughter, the ever-changing berms, the anticipation at the awards. We have a bonfire and enjoy a salmon feast together. Cheers to The Mt. Baker Legendary Banked Slalom, a 27-year tradition in all our hearts. See you next year, same time, same place.