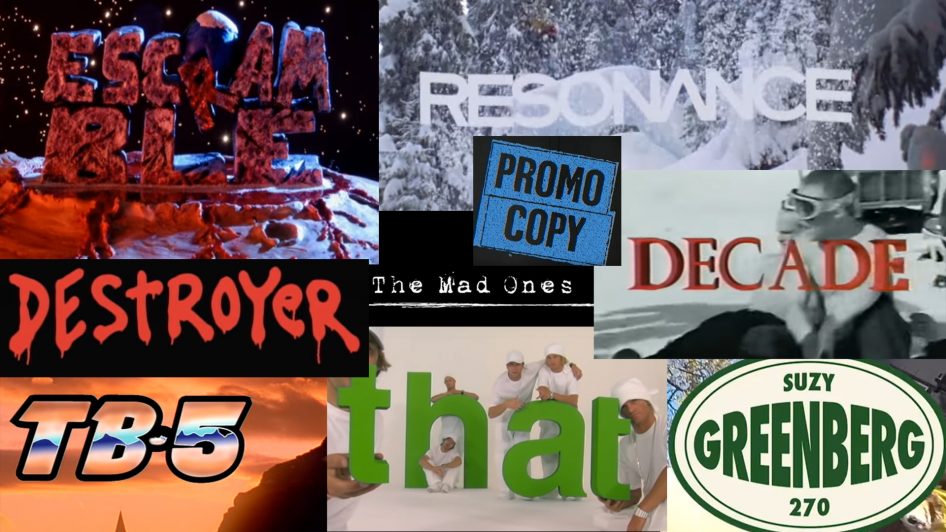 Stay-at-home orders are in place and you just finished up the infamous Tiger King series. Get off Netflix and get stoked for next season with these free snowboard films.

The Forum team has been fueled progression in the snowboard industry for years. THAT is a prime example of their influence in the early 2000s.

This Volcom film is filled with timeless snowboarding from the likes of Terje Haakonsen, Jamie Lynn, Mark Landvik, Wille Yli-Luoma and more from the then-global team.

Filmmaker Liam Gallagher followed some freaks all winter long for The Mad Ones. Enjoy 53 minutes of madness from the winter of 2011-2012, with riding from Lucas Debari, Nick Russell, Bryan Fox, Wyatt Stasinos and many more.

Patchwork Patterns is a celebration of experimental snowboarding and technical skill, the third feature film of the illustrious Think Thank saga.

that’s it that’s all

Travis Rice stars in one of many films that’s proved he’s one of the best backcountry snowboarders that’s ever lived. Dedicated to the new wave and perspective, this is That’s it That’s All.

From a time when a Spin Doctors cassette could be found in your mom’s car, Decade is a Mack Dawg gem featuring Peter Line, Devun Walsh, Joni Malmi and more. Nothing more needs to be said about that, hit play.

There are a lot of Absinthe films that could go on this list, but if you haven’t seen Resonance it’s a good place to start. This 2012 offering from the iconic film crew never gets old.

The brainchild of Scott Stevens, Suzy Greenburg 270 The Movie rightfully broke the internet earlier this season. It has a classic, early 2000s vibe paired with next-level progression and mini-shred creativity.

Promo Copy is an innovative 16mm snowboard film from Defective Films. It’s a video for the snowboarder who likes a bit of everything, as it flows from the park to the streets to the backcountry with riding by Iikka Backstrom, Eddie Wall, Mikey Rencz, and many more.

Standard Films released ten Totally Board movies during the 1990s, and TB5 is one of the best. The Totally Board film series is a documentation of snowboarding’s uprise, and features a long list of legends like Bryan Iguchi, Kevin Jones and more in their younger years.

Produced by Robot Food, Afterlame is an essential, must-watch movie for every snowboarder. It combines an all-time rider list with an incredible soundtrack that is sure to strike a chord with anyone who has ever strapped in.

Released in the fall of 2003, Neoproto offers a look at some progressive riding by the likes of Shaun Mckay, Nima Jalali, Corey Smith, Curtis Woodman, Tim Eddy & more.

This one should probably come with a parental warning advisory. Led by Boozy the Clown, the Whiskey film trilogy is as chock full of debauchery as it is badass snowboarding.

the eternal beauty of snowboarding

Join photographer Jerome Tanon as he takes you on an existential journey into the true, and often hilarious life of professional snowboarding.

See our exclusive interview with Jerome about The Eternal Beauty of Snowboarding here.

The first ever Van’s team snowboarding movie, shot exclusively on Kodak 16mm film. Join riders Pat Moore, Sam Taxwood, Jake Kuzyk and the rest of the global team as they travel the world and take on an artistic approach to modern snowboard cinematography.