The cabin smelled like stale weed. A box of crushed beer cans and discarded wine bottles sat outside. Next to it, spent shotgun shells.

“Maybe we should just stay here for the next two weeks?” Austen Sweetin said.

It was a joke, of course. This little shack next to a popular snowmobile trail in the Whistler, BC backcountry was a little cramped, anyways. It would have been impossible to maintain six feet of distance from one another. 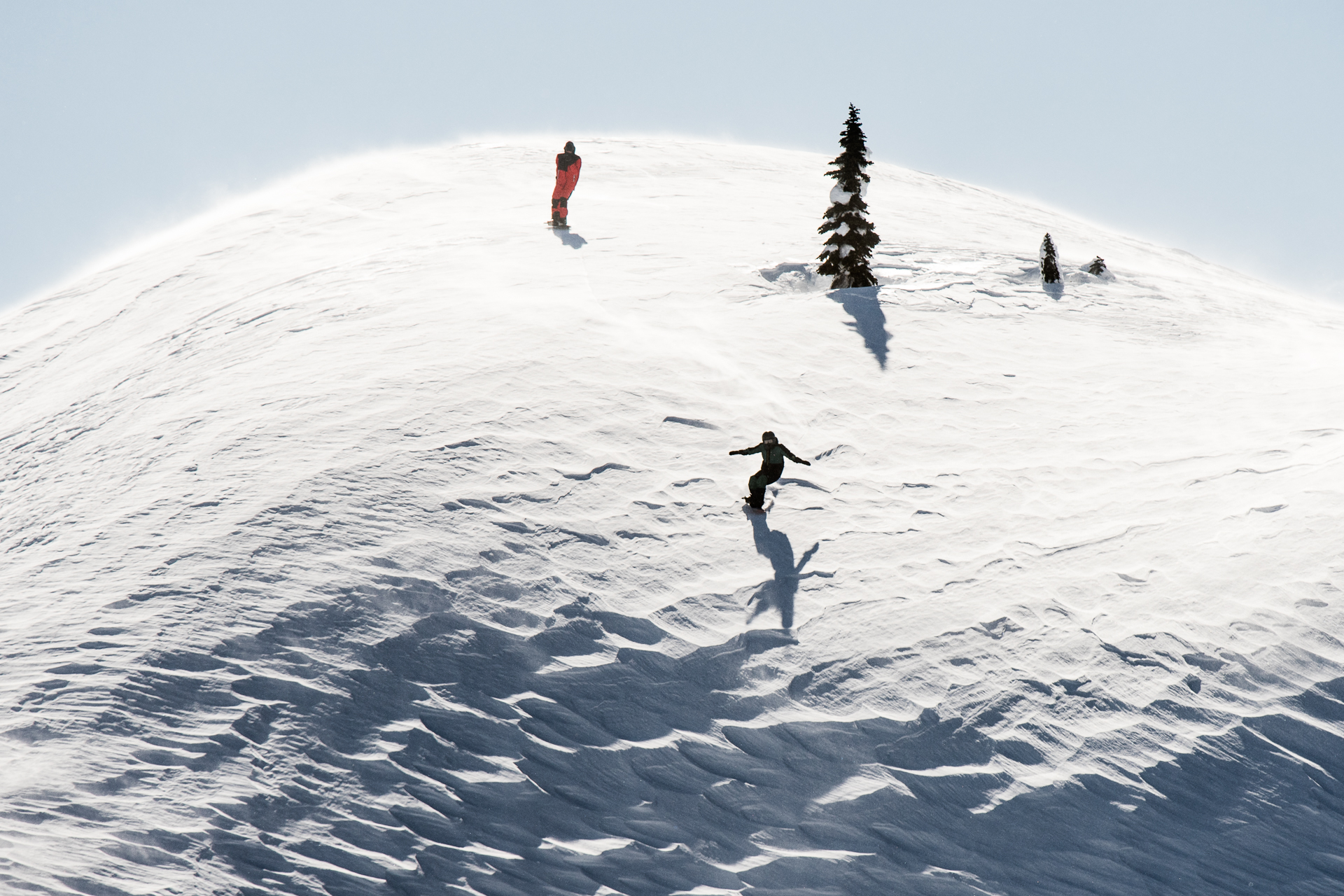 Austen Sweetin and Timmy Taussig on a cold, windy Saturday. You gotta strap in at least once.

Yet we didn’t have to worry about our crew: Austen, Robin Van Gyn, Timmy Taussig and filmer Sean Lucey. We’d spent the past three days together looking for decent snow. Everyone was in good health. It was Monday afternoon and a massive wind event on Friday had all but shut down the Coast Mountain alpine. Still, we’d been out there searching. Because what else are you supposed to do in mid-March with nowhere to go?

As COVID-19 concerns bloomed across the world, as the resorts shut down, as grocery store shelves cleared of staples, it all seemed so far removed. Deep in the backcountry beyond the digital noise, we rode in a bubble, a five-pack of snow seekers with little worry beyond the objective hazard we must always manage far from any controlled environs. 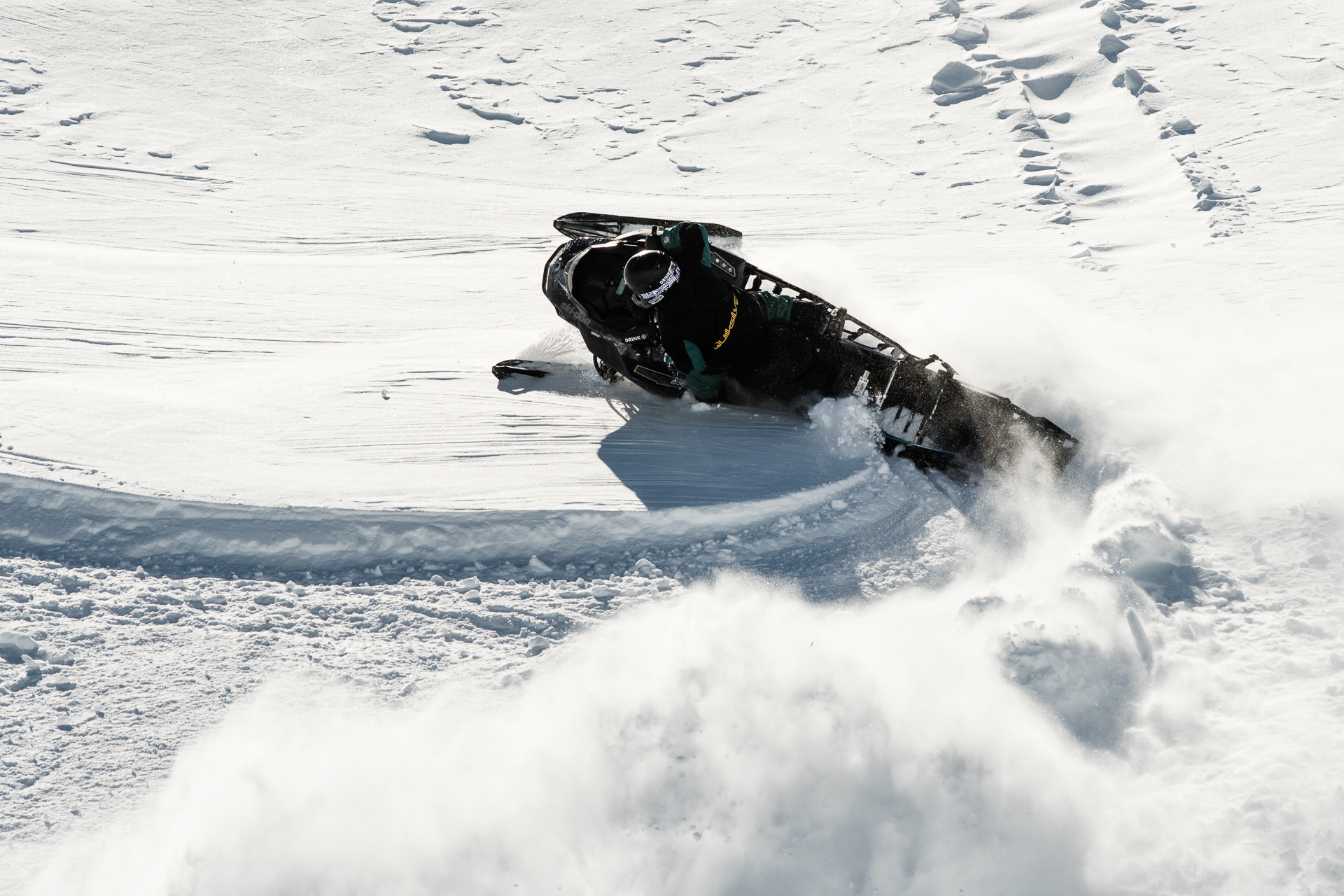 Austen Sweetin and high octane transportation in the Whistler backcountry.

The weekend began cold. On Friday, I rolled north across a still-functional Canada/USA border with few questions.

“Are you concerned about the virus?” the border guard asked.

“Not really, there’s only one case in Whatcom County, [WA,] where I’m from,” I answered.

I declared a loaf of bread, PB and J, and she made a little joke about essential supplies for lock down. The coronavirus seemed light, distant. 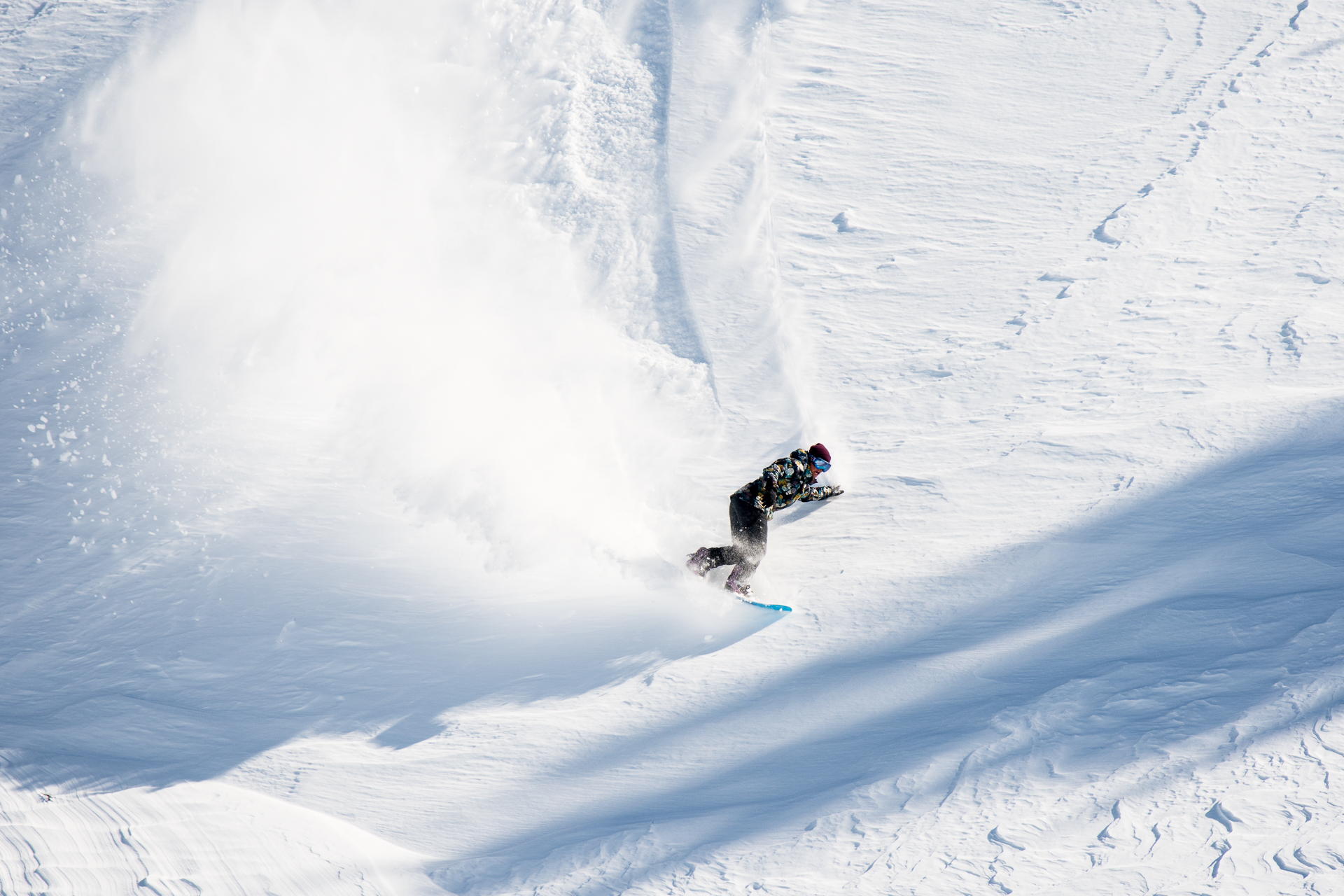 Upon arrival, the Pemberton Hotel still shook with bass from the bar downstairs, its thin walls quaking for a typical Friday night crowd. The pandemic hadn’t arrived there, yet. After a windswept day north of town on Saturday, the mood thickened a little, but we continued to ply those storied haunts off the Sea to Sky Highway, finding little improvement on Sunday, and returning once again to mounting concerns. Travel from Europe had been banned. Backcountry lodges in BC were shutting down. Pings from the outside world brought bad news.

“Everything’s cancelled,” Robin said for the 10th time in the past couple days. This time, she wasn’t joking. The border situation was beginning to look dicey. Would they shut it down? Maybe it was time to go home? 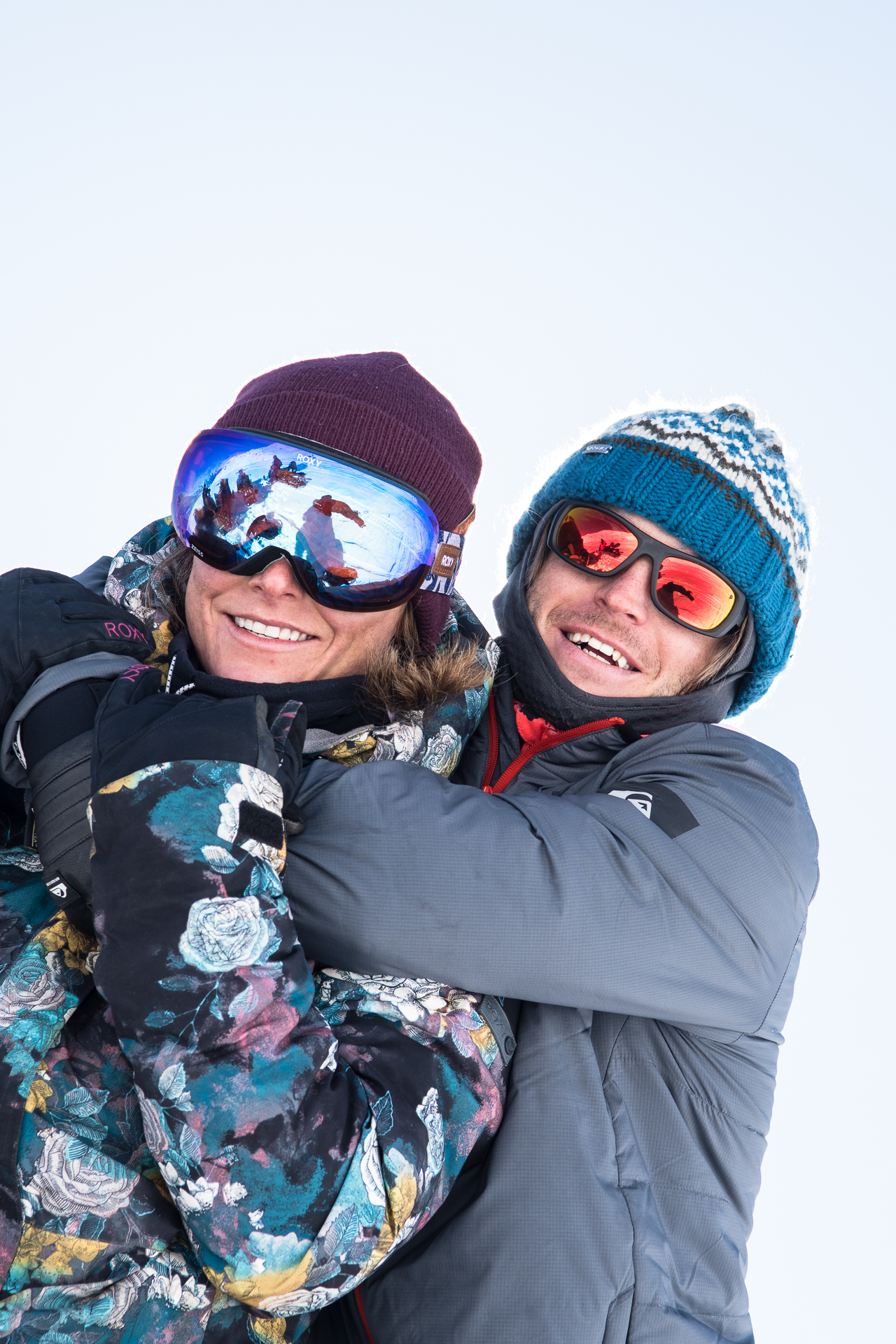 But the backcountry, as always, was waiting. We weren’t sure what we’d find, but we decided to do what we always do in March: go snowboarding. In fact, by isolating with the same quintet of the past several days, we were perhaps acting in the best interest of ourselves, our friends and neighbors. Because if you don’t interact with many other folks, you’re doing the best you can to control this snowballing viral threat.

Monday came, and we loaded up once more. The parking lot was empty—whereas the weekend had seen wall-to-wall recreationalists at the trail head, there were now few vehicles and no one collecting trail fees. It was warm, sunny, not a breath of wind, as if the mountains had decided to put things on hold, joining the rest of the world in a pandemic slumber. It made me wonder if this enforced pause would have a silver lining—maybe we’d be forced to pump the brakes during what is usually a very hectic time for snow-chasers. Maybe we’d be able to take stock of the accelerating pace of our world and simply live in our personal space for a moment. 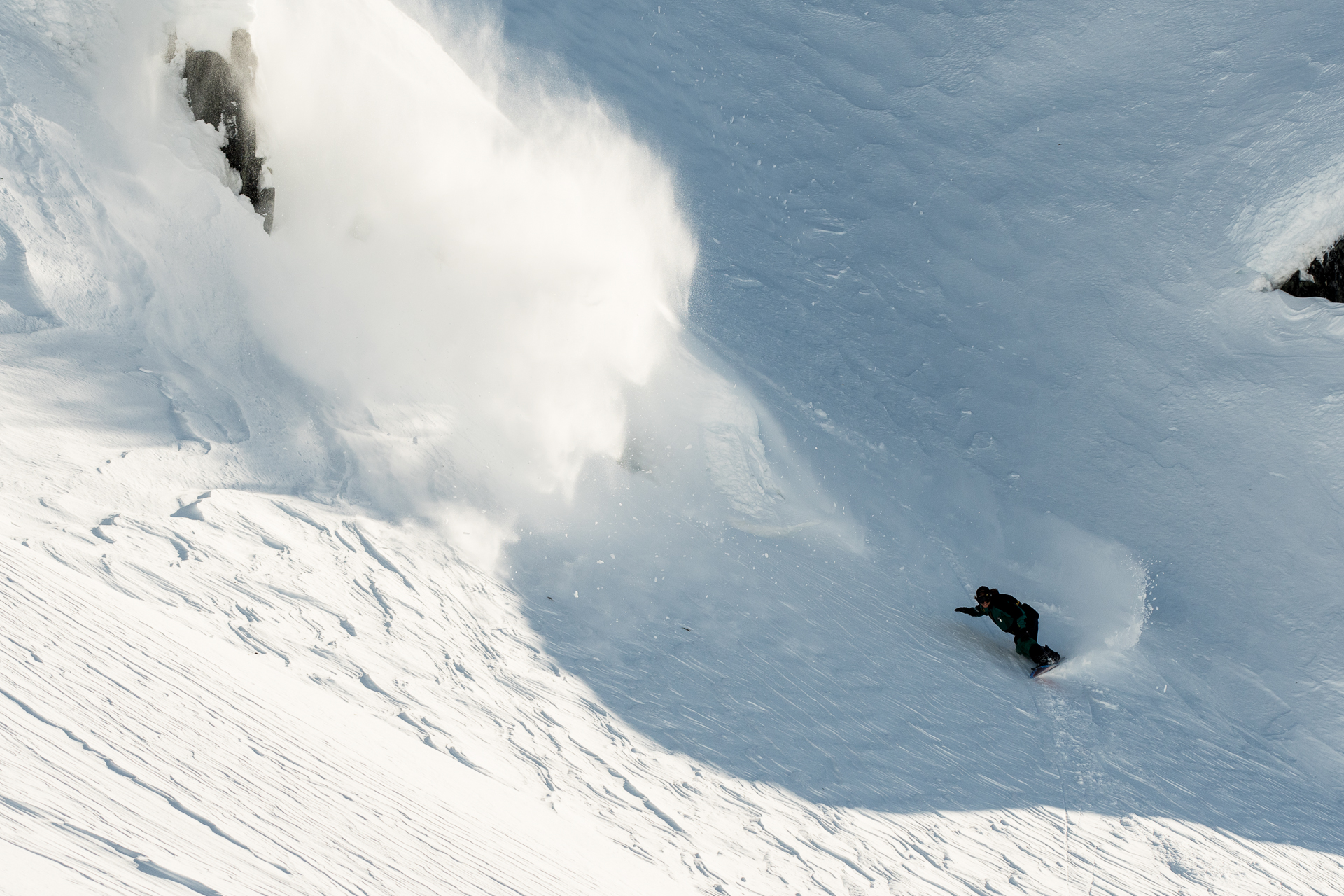 Austen knows how to kick up a rooster tail.

For the many folks directly affected by COVID-19, the pandemic is a thoroughly terrifying situation. I don’t intend to downplay its severity or take it lightly. My heart goes out to those who are suffering, and we’ll all likely feel the negative effects of this virus in one way or another. I for one am seriously concerned for the health of my parents, as they are most vulnerable to the symptoms of this illness. I pledge to do my best to practice social distancing and slow its spread. But it’s also an opportunity for us to ground and reconnect and reflect—to stay close to the people and places that we hold in high regard. We can still go up into the mountains and feel at peace, but we must do so with a very low tolerance for risk so as not to stress an already maxed out health care system. We must do so close to home, so as not to risk spreading the virus to other communities. We can act responsibly, but we can also live beyond fear.

So, we went into the backcountry once again. Third time was the charm. There was decent snow, finally. We took our time in riding it, knowing this might be the last gathering of this group of friends for a while. We lingered until the sun dipped low to the west, topping out on a final climb, taking a moment to breathe. 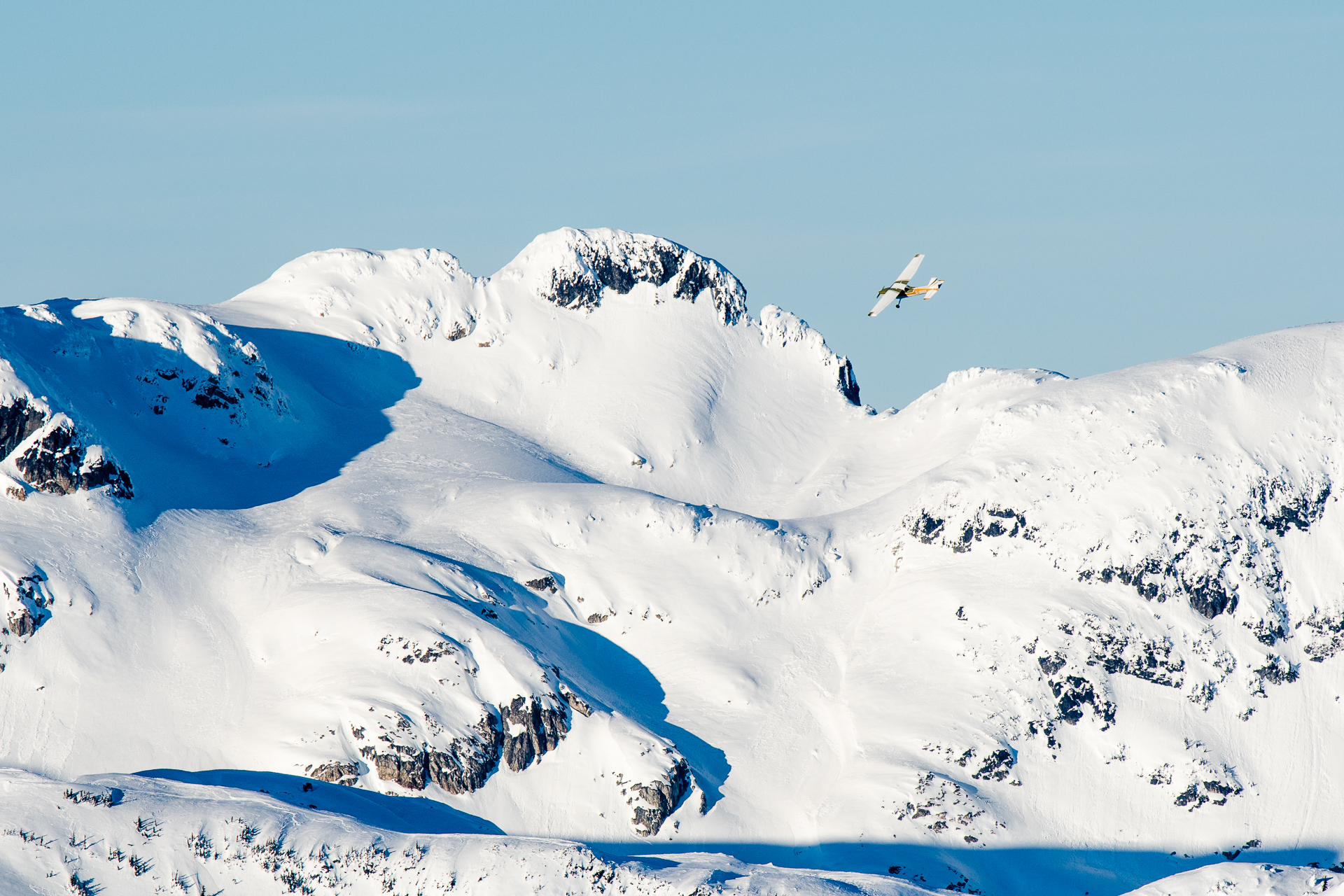 Charles Reid, is that you? We only saw other folks from afar deep in the Coast Mountains.

I’d already decided to go home and remain there for the foreseeable future. Same with the others. For at home, for many snowboarders, there are snowy peaks and maybe oceans or rivers, and green space—plenty of room to explore beyond the masses. I’ve got a splitboard. It’s sunny for now, and it’s looking like snow next week. You don’t need a big crew to enjoy a day in the wilderness, and that’s one of the greatest beauties of backcountry snowboarding.

I drove south through Vancouver on a calm Highway 1 and tuned into my usual source for global news: The Daily by the New York Times. They’ve been a great source of objective information since I first heard of the novel coronavirus outbreak in January. But instead of the usual 30-minute piece, Michael Barbaro presented a 10-minute trio of passages which reminded us that we have lived through global crisis time and time again—that life will go on. To close the show, he turned to the archives and an historical word from famed British writer C.S. Lewis—his 1948 essay entitled “On Living in the Atomic Age”. 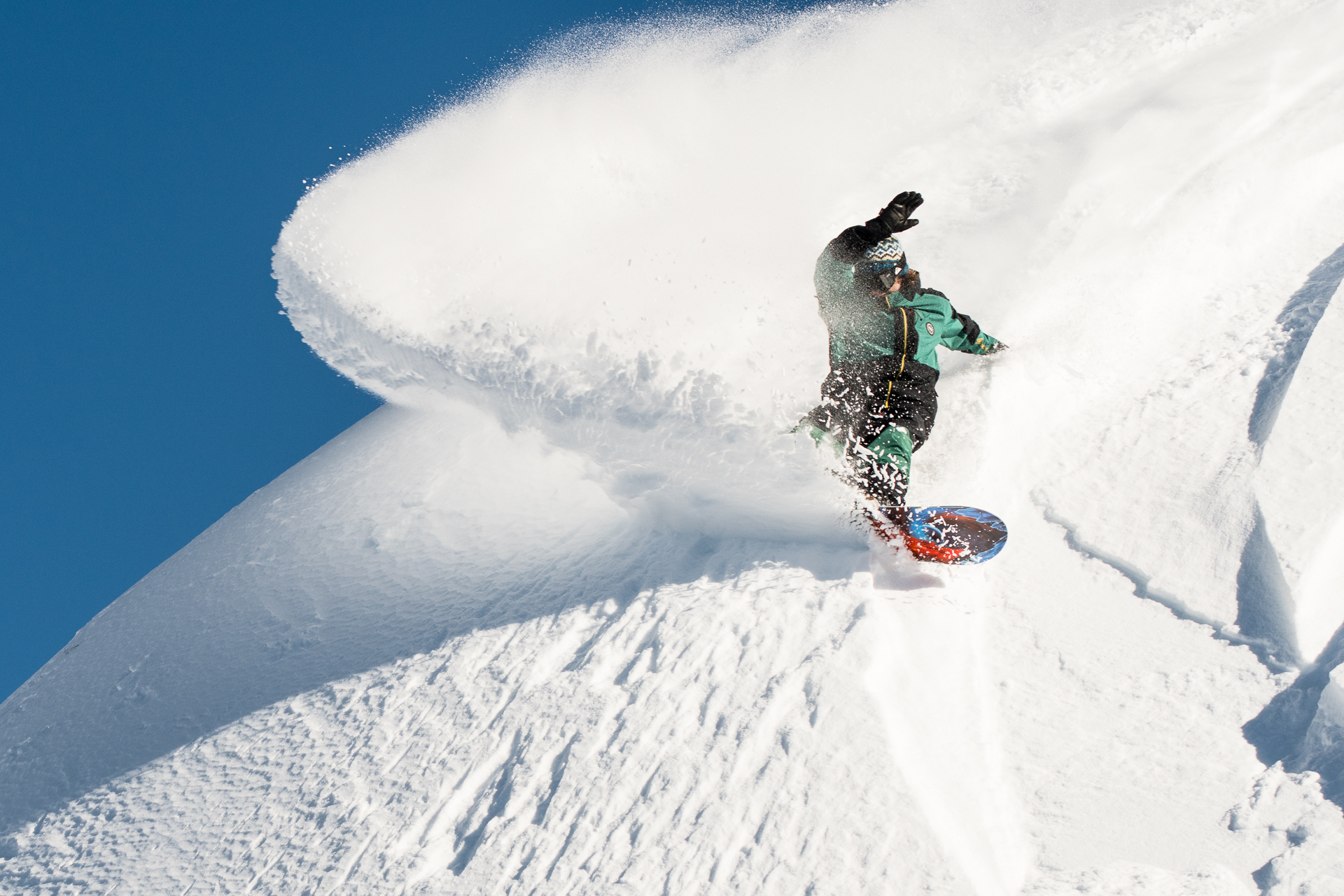 In other words, do not let us begin by exaggerating the novelty of our situation. Believe me, dear sir or madam, you and all whom you love were already sentenced to death before the atomic bomb was invented: and quite a high percentage of us were going to die in unpleasant ways. We had, indeed, one very great advantage over our ancestors—anesthetics; but we have that still. It is perfectly ridiculous to go about whimpering and drawing long faces because the scientists have added one more chance of painful and premature death to a world which already bristled with such chances and in which death itself was not a chance at all, but a certainty.

This is the first point to be made: and the first action to be taken is to pull ourselves together. If we are all going to be destroyed by an atomic bomb, let that bomb when it comes find us doing sensible and human things—praying, working, teaching, reading, listening to music, bathing the children, playing tennis, chatting to our friends over a pint and a game of darts—not huddled together like frightened sheep and thinking about bombs. They may break our bodies (a microbe can do that) but they need not dominate our minds. 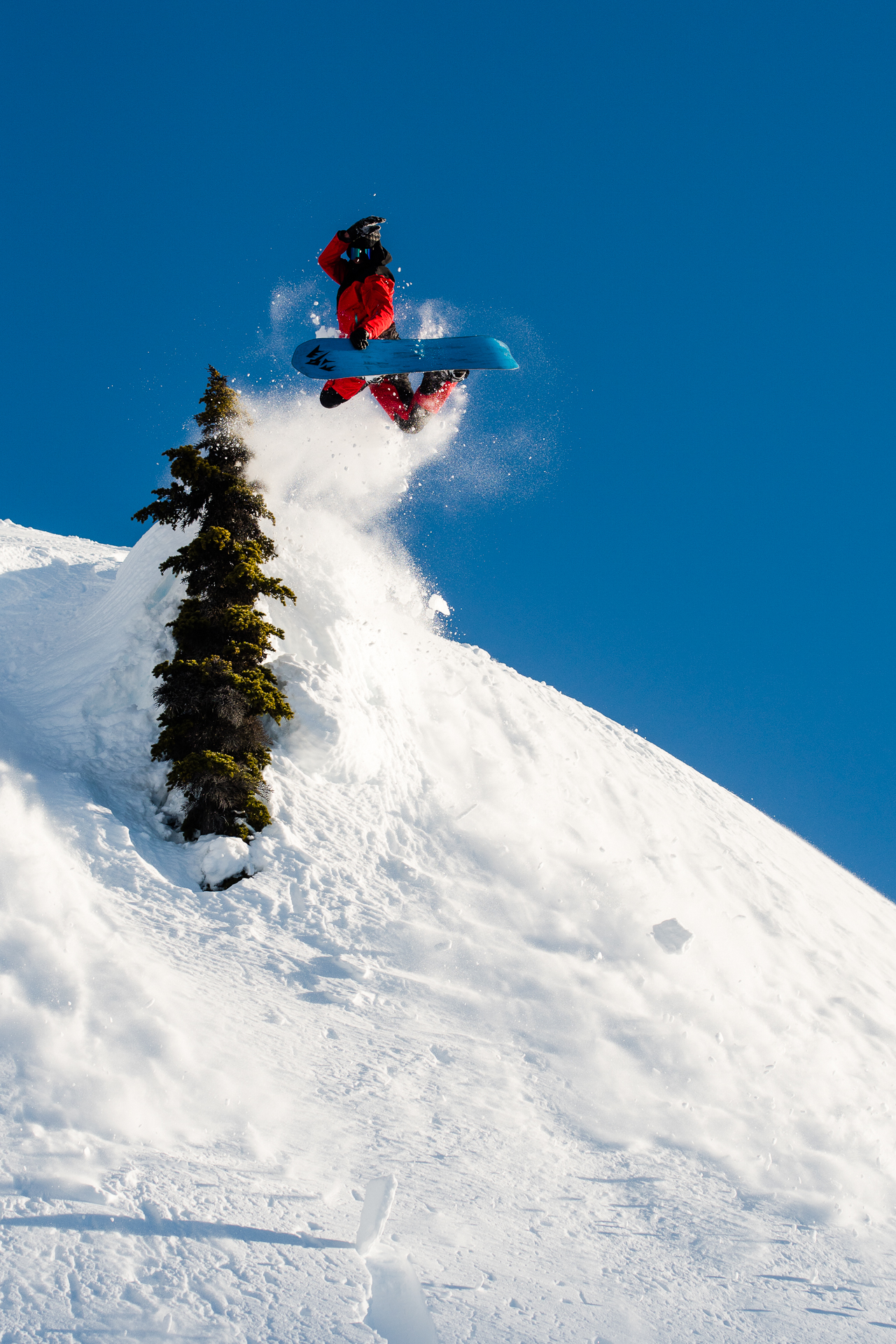 So go on and keep living. Maybe skip the game of darts, and instead head for the hills in your backyard. Take it easy and find a mellow spot to stop and reflect. The mountains themselves, as always, are wide open.