The skies surrounding Alpental, WA beamed blue throughout the week, but on Saturday morning clouds rolled in. As it snowed towards the top of the mountain and rained at the bottom, the Last Ditch Effort Banked Slalom off Chair 2 received a blustery mix of both. While you can never count on sunshine during springtime in the Pacific Northwest, fortunately there are a few things you can count on: When Blair Habenicht and his crew of dedicated diggers build their annual banked slalom, it’s going to be fast, fun, and demanding. Snowboarders will turn out in droves to compete, and the event is bound to be a blast no matter the weather. 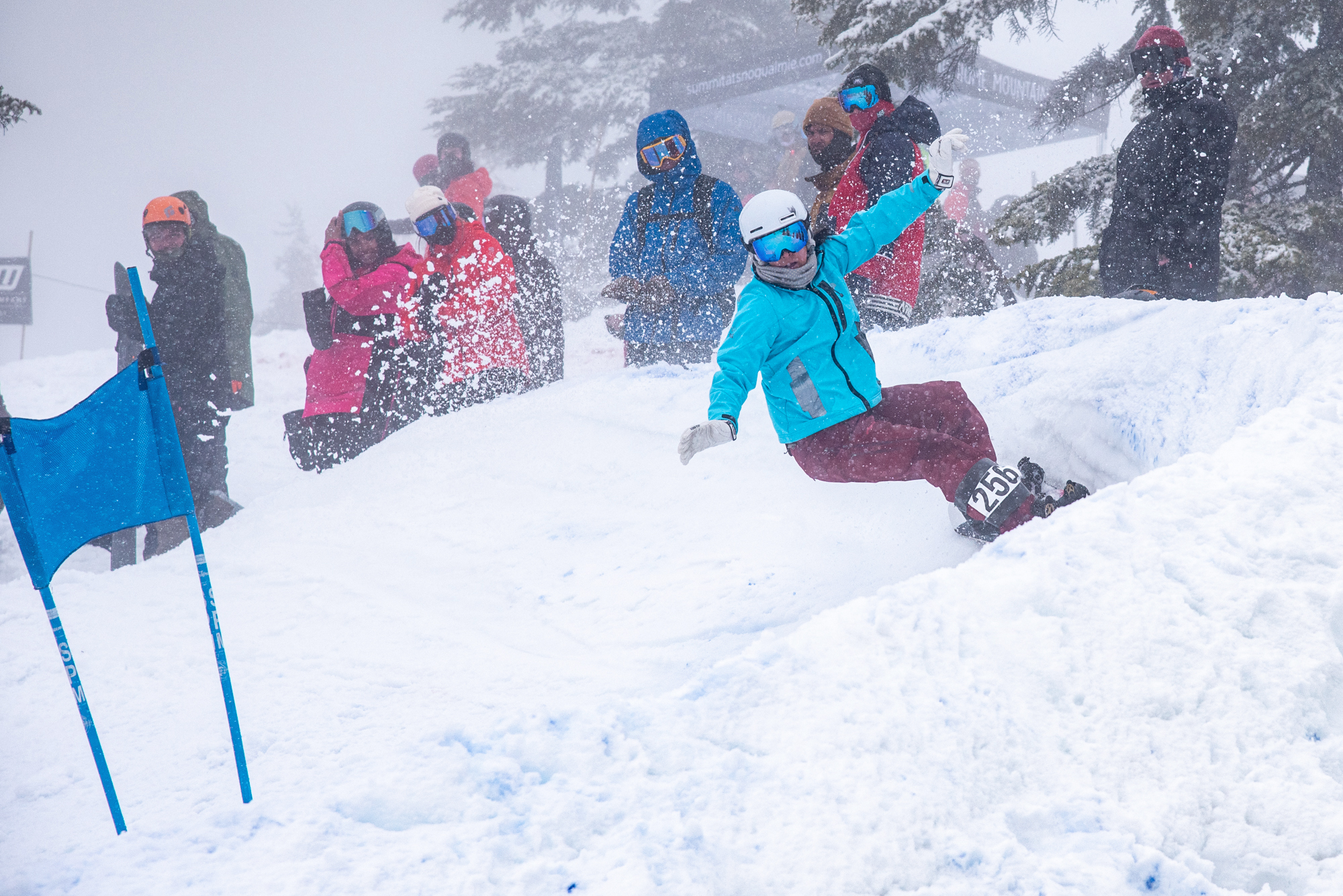 ABOVE If Marni Yamada shows up to race, she’ll usually end up on the podium. At the 3rd Annual Last Ditch Effort she clinched a second place finish. This year she took first for Pro Women. 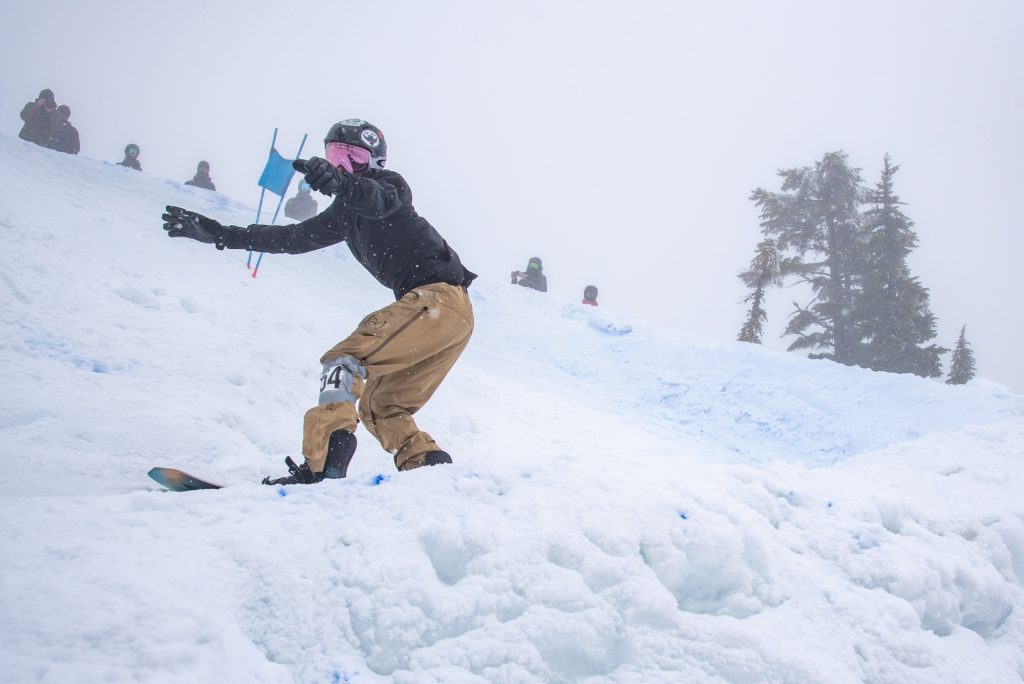 ABOVE Che Contreras defended his title with a first place finish in the Pro Men category. Che had the best overall time on course at 43.32 seconds on his first run. Only the fastest of each riders’ two runs was scored, but Che’s second run would’ve secured the victory as well.

Now in its fourth year, the 2021 Last Ditch Effort hit all its usual high notes and then some. Blair claims it was his favorite build yet. “This year’s course was on a southern facing slope,” he says. “That area gets first light of the day, so even when it was still icy down at the bottom, we’d get up there and have the softest snow on any part of the mountain. That was really conducive for digging.”

Considering that only two of the course’s 15 berms were built with snowcat assistance, soft snow didn’t exactly mean the diggers’ work was cut out for them. A core crew of 13 started on Monday and grew to roughly 25 by Friday. Even with all hands on deck, the crew spent their last two days shoveling from 9 a.m. to 6:30 p.m. just to finish in time. That labor of love showed in the finished product: a speedy, meandering snake-run with more than a few opportunities to catch air—even if you weren’t exactly trying to make that happen.

“I like to go fast, I like big turns,” Blair says. “That’s kind of Washington. We try to put those feelings into a banked slalom. It’s all built completely by snowboarders from across Washington state. I keep it to riders that are good at riding berms so that we can keep the course in shape throughout the week—no diggers that are going to check speed, everybody’s gotta rip.”

In many ways the event itself exemplifies its creator. Blair and his boarding are intense, but he’s also a kind, amicable individual. Somehow, despite the consistently gnarly nature of the courses, the Last Ditch Efforts always feels inclusive and inviting. It’s over-vert fun for the whole family (just ask the Loebs), with riders from eight to 50-plus-years-old racing for their shot at golden shovel glory. 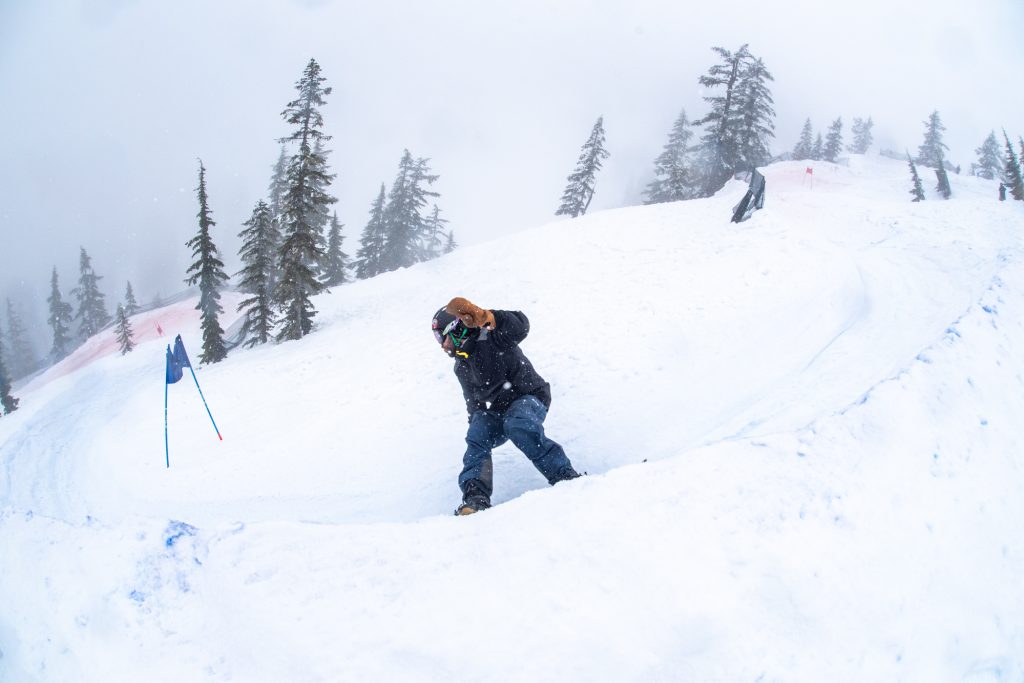 ABOVE Blair on course. There usually isn’t enough time for Blair to put down a timed run during the event, but this year he made it happen. He flew off a berm on his first run, shook it off, hiked back up then put down the fourth fastest time of the day. It was an impressive feat especially considering the lack of sleep and intense manual labor he put into the course leading up to the event.

By the end of this year’s Last Ditch Effort, Blair’s only regret was not being able to let more people compete. “This year, every spot in the race sold out in four minutes,” he says. “The Men’s category sold out in 52 seconds. I hate that it’s an internet race before the race. So, I’m thinking about changing it to a lottery, maybe a combination of entrance and lottery, but also making it a bigger, three-day event. We had 150 people in the race, and I easily had that many more people hit me up after registration asking if they could get a spot. All I can really think to do is ramp it into a bigger event to let more people in. We’ll see.”

Although the size and duration of the next Last Ditch Effort is still up in the air, one thing for sure: it’s going to be pure Washington, right down to the weather. 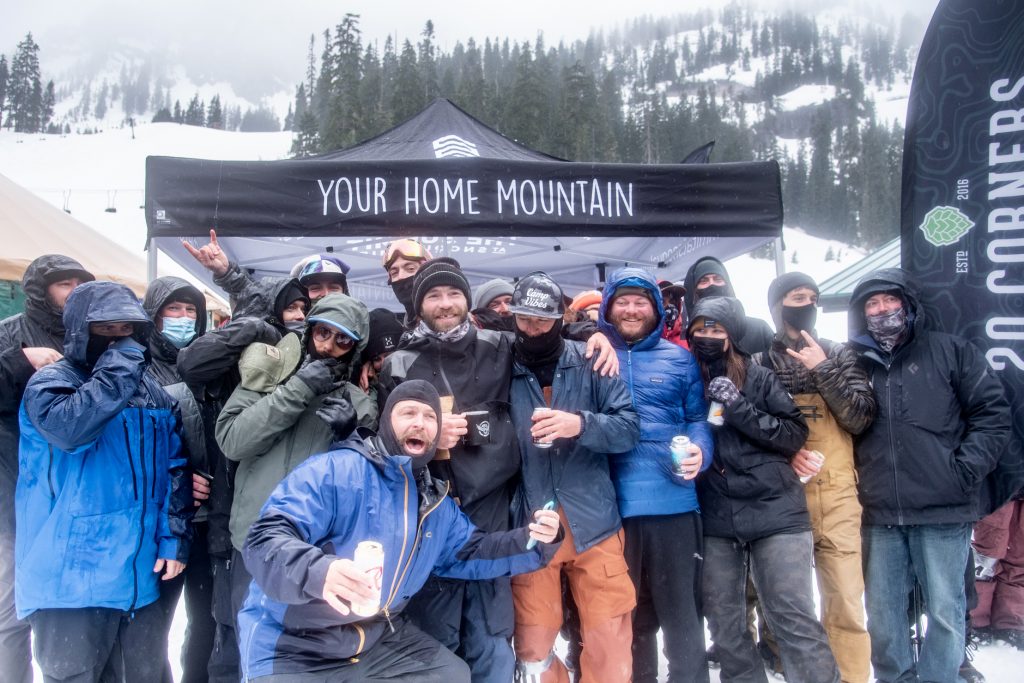 ABOVE Blair and the dig crew who make it all possible. Another key figure behind the Last Ditch Effort is Blair’s wife, Jenell, who Blair stresses the event couldn’t happen without. 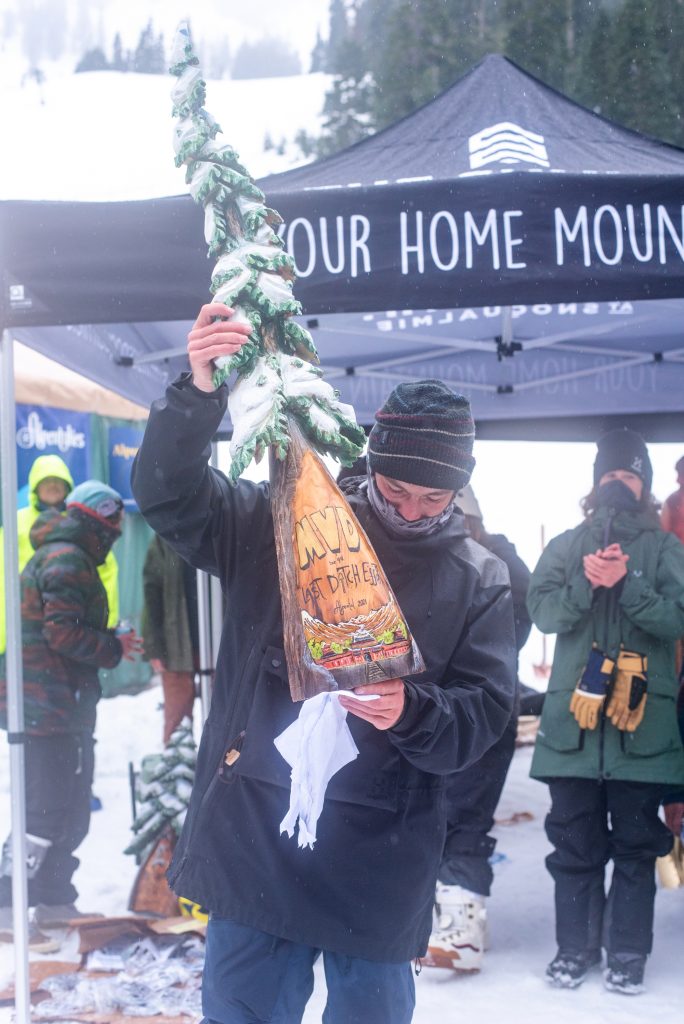 ABOVE Blair presents the Most Valuable Digger award to Temple Cummins, who unfortunately was not able to make it to this year’s Last Ditch Effort. Blair says Temple has had a tremendous impact on his approach to snowboarding and, as time’s gone on, to being a partner, father and friend. “Every year when I make this course I look to Temple for guidance throughout the entire build,” Blair says. “When I was 15 I remember doing a report on an inspirational figure, and it was Temple. I’ve always admired his snowboarding, and as I’ve grown older that admiration for him has surpassed snowboarding. To me, it’s harder to do it better than that guy–across the board, as far as being a snowboarder and a person.

The whole dig crew, we’re completely enamored with him. It’s a Washington crew, and Temple is the banked slalom guru–if not just the snowboard guru–of Washington. He’s everyone on the crew’s mentor in some way or another. Even though he wasn’t there this year, I had him in the back of my mind the whole time.” 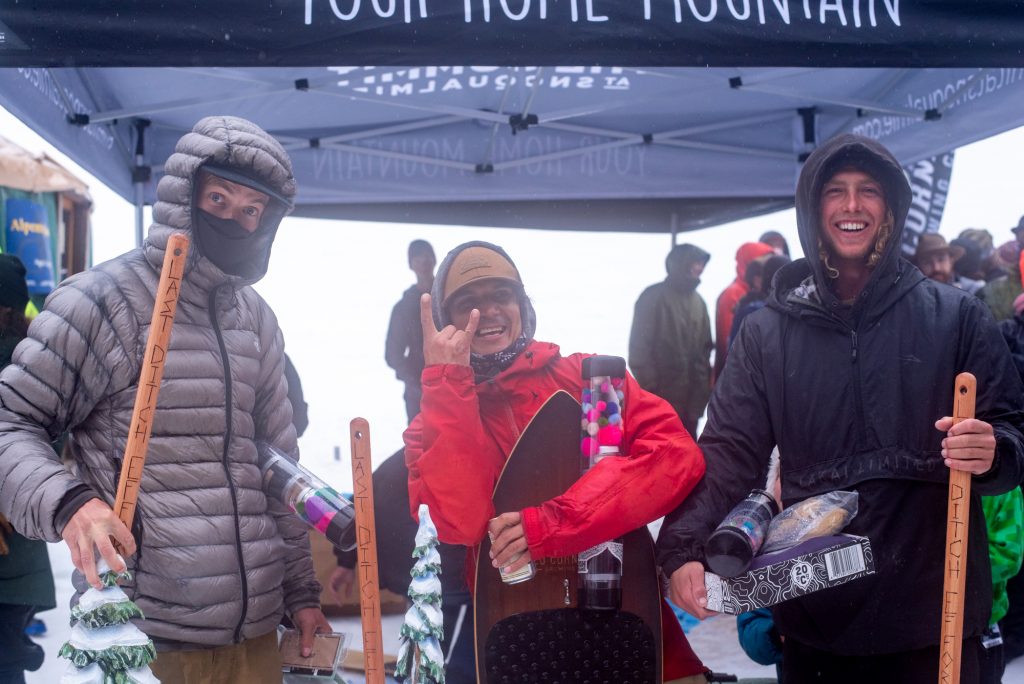 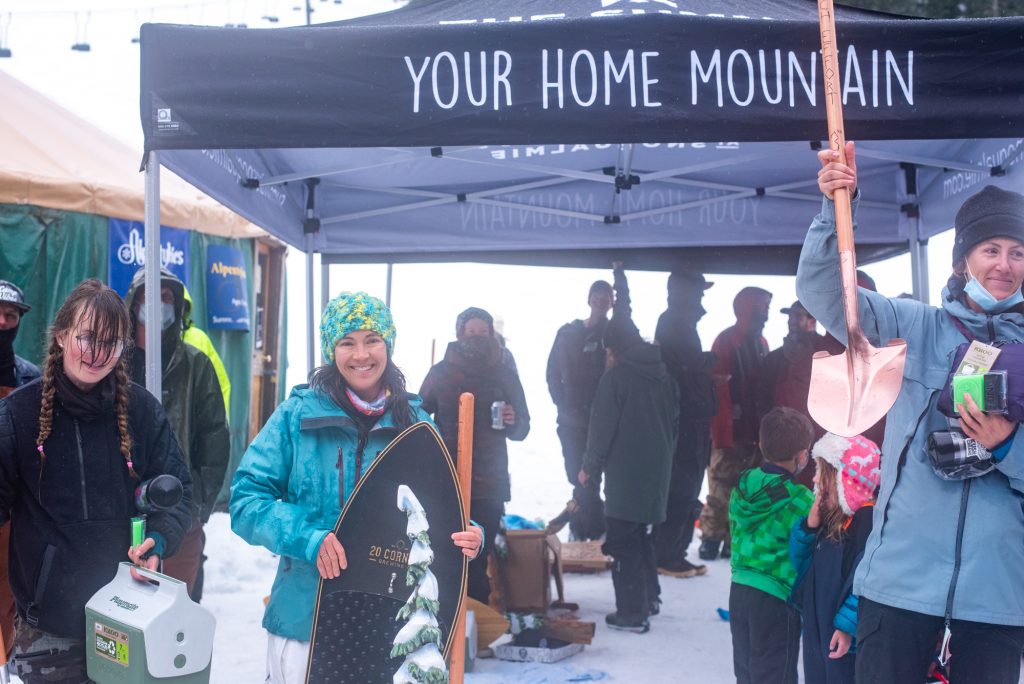 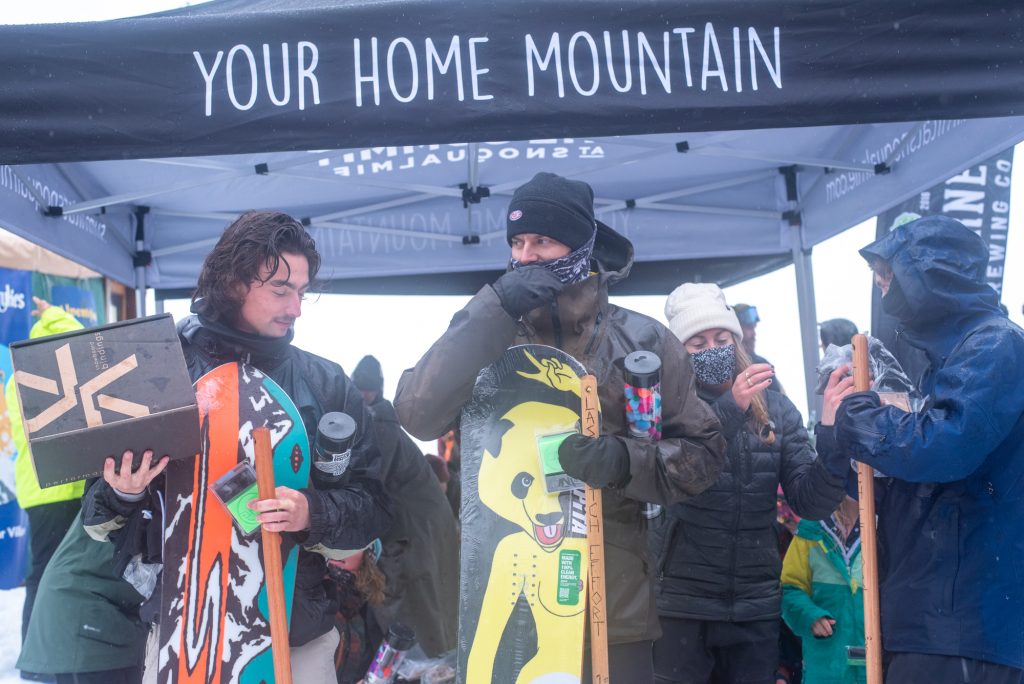 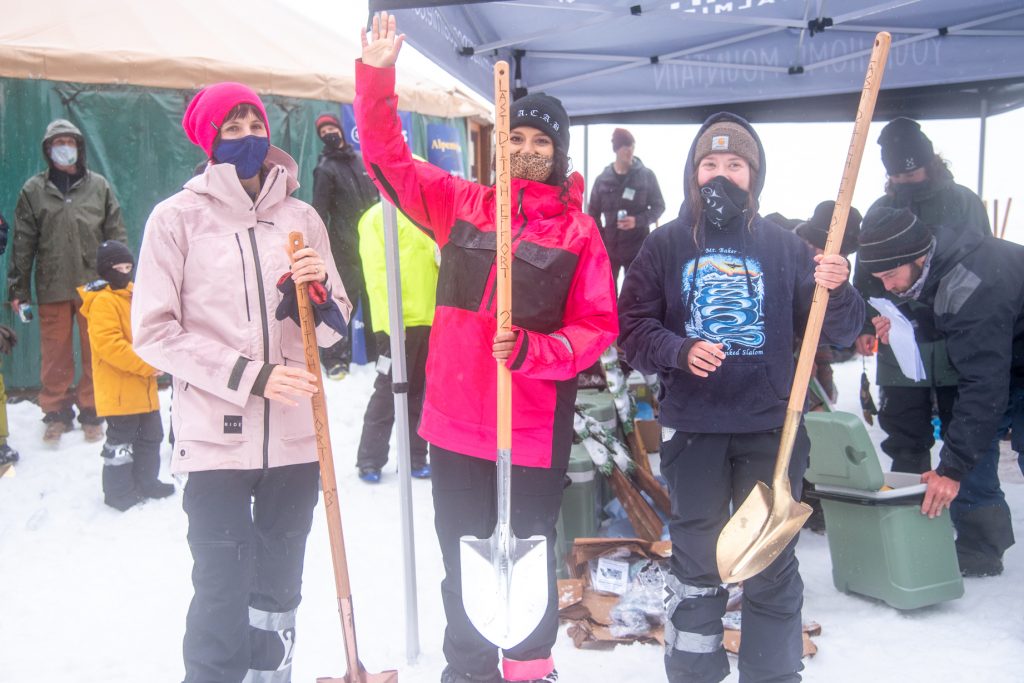 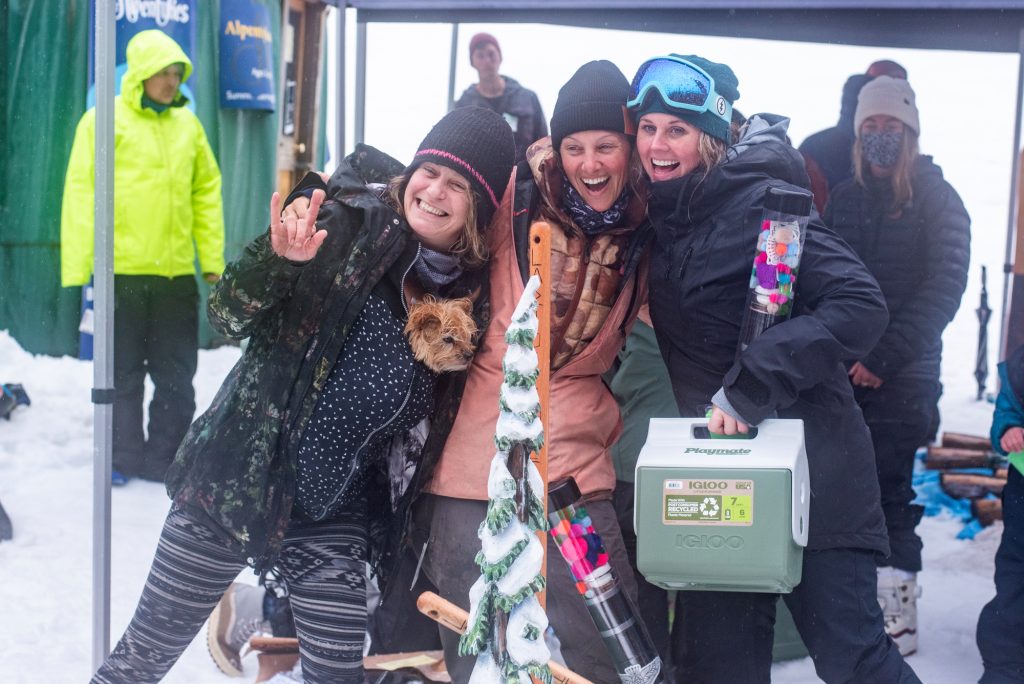 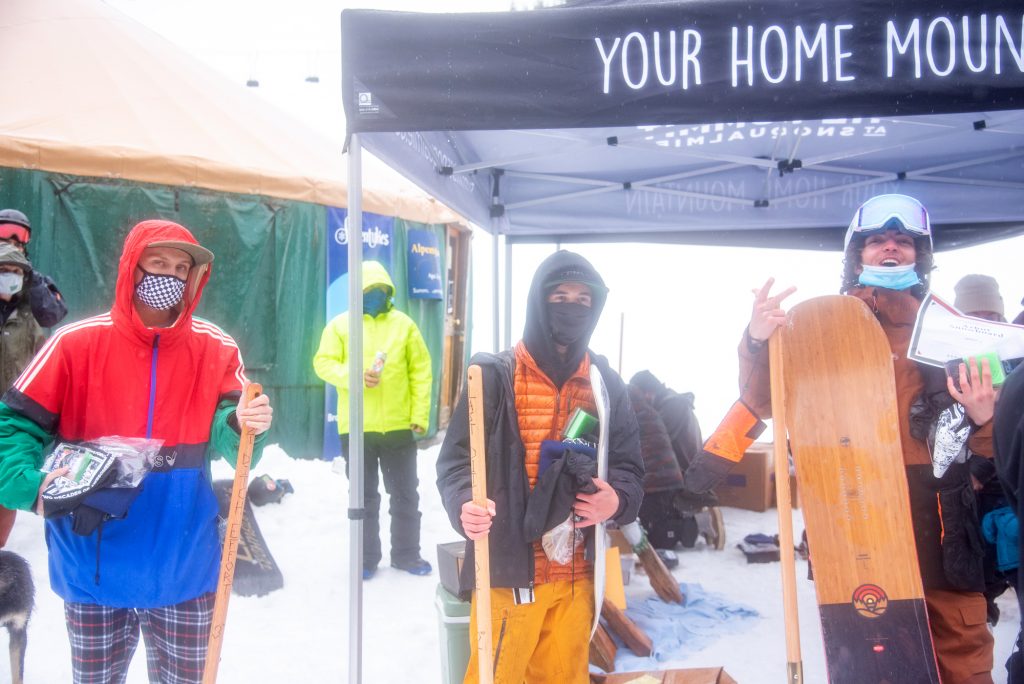 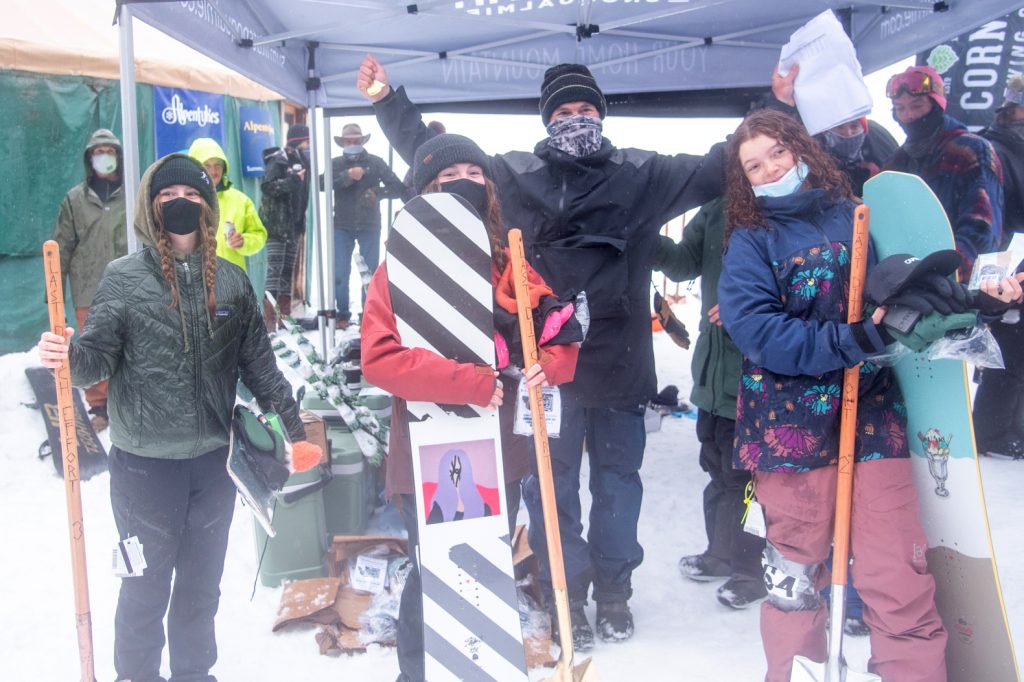 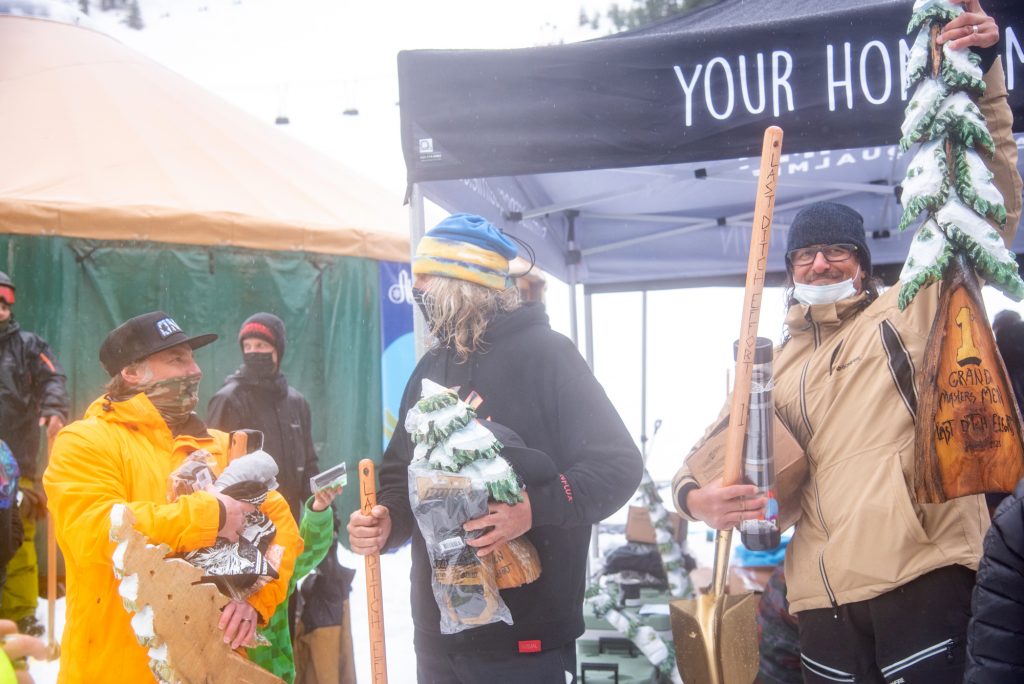 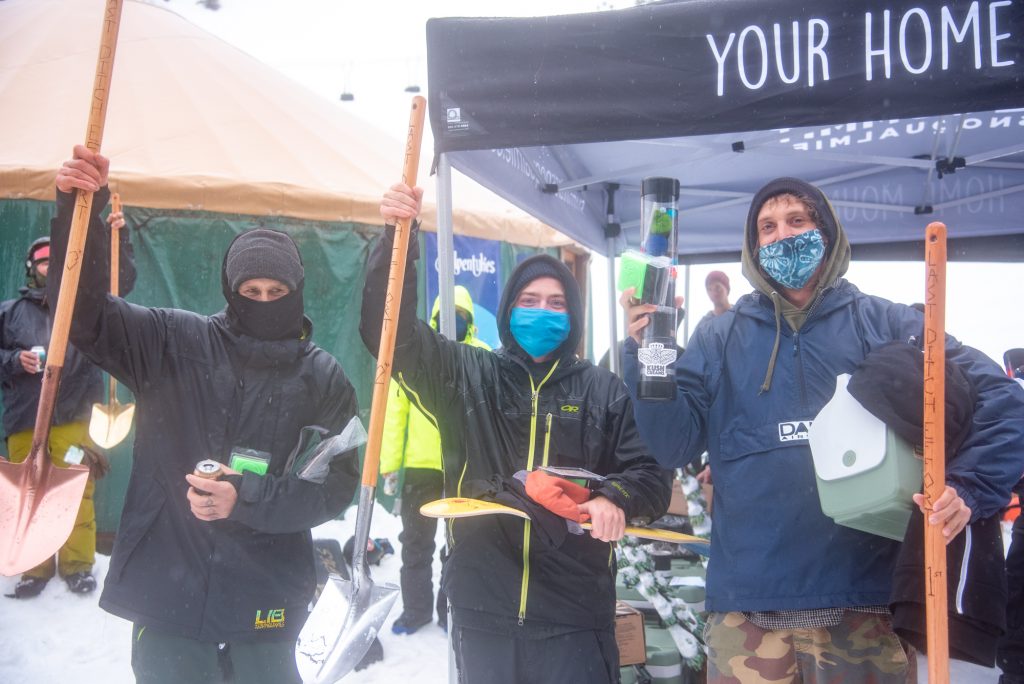 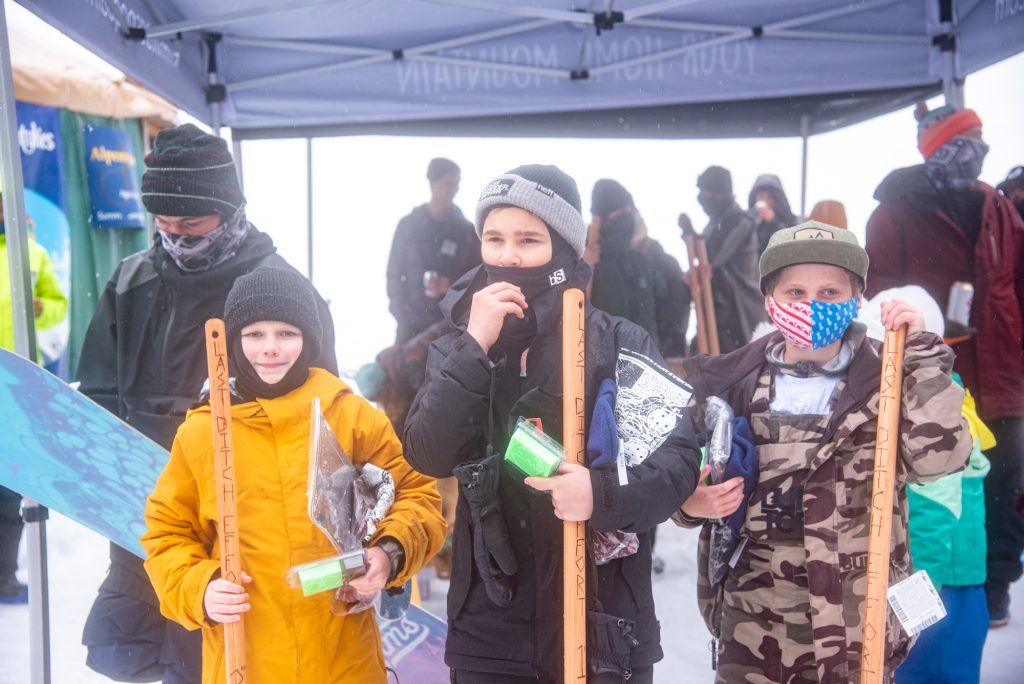 See the full results at thelastditcheffort.com

A huge thanks to Blair, Jenell Turner & the Alpental crew for hosting the event. Thanks also to all the diggers for their hard work on the course, and to everyone else that made this event possible.