Standing at roughly 11,900 feet above sea level near Loveland Pass, the sun beats down heavily through a brilliant blue Colorado sky. Chad Otterstrom is on Kirk Teare’s tail beelining over a small strip of snow towards a hesh quarterpipe below. Kirk launches a rodeo towards the qp’s extension as Chad promptly plants his hand on top of two feet of vert. It’s a crowd-pleasing doubles-line that’s audibly appreciated by an estimated 200 folks gathered here for the 11th Annual Love Games; a freestyle focused season wrap-up event presented by Satellite Boardshop in late March. Many of the people in attendance are just chilling, but those that are riding have been hucking hard. Several have been slamming, and we’re only on the first of four features of the day. 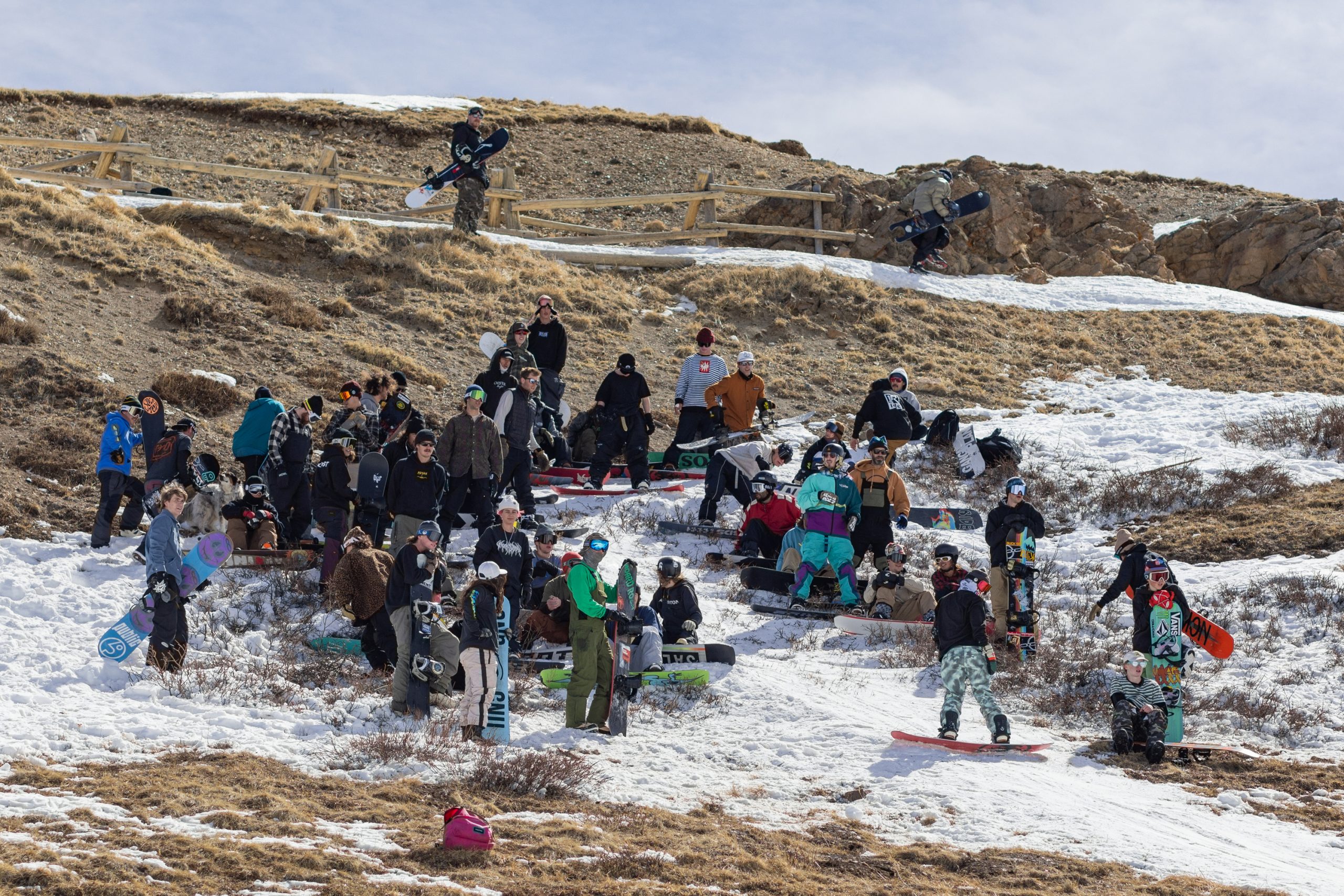 ABOVE Hunter Frutchey seemed to have spent about half of this day upside down. He was consistently going big on both the QP and the Diving Board hip. Photo: Ben Shanks Kindlon.

ABOVE RIGHT Mid-session TLC on the QP. Photo: Phil McKenzie

Love Games is a traveling circus of sorts. Today’s session started in-sight of the road at the QP and following an hourlong session on that build we’re now headed to the next: a popular hip known as the “Ironing Board.” With more tang than would be suitable for the children, attacking this jump ain’t for the faint of mind regarding airtime. After a great deal of carnage, countless damn-that-was-almost-bad’s and a handful of awesome makes, we continue down the mountain to a zone where the crew has built a BMX-style, whoopty-woo jump line with a chest-high tree in the middle of it. Everyone dabbles there for a bit and then we finish things up at a DIY park featuring wooden, metal and PVC jibs and jams galore. 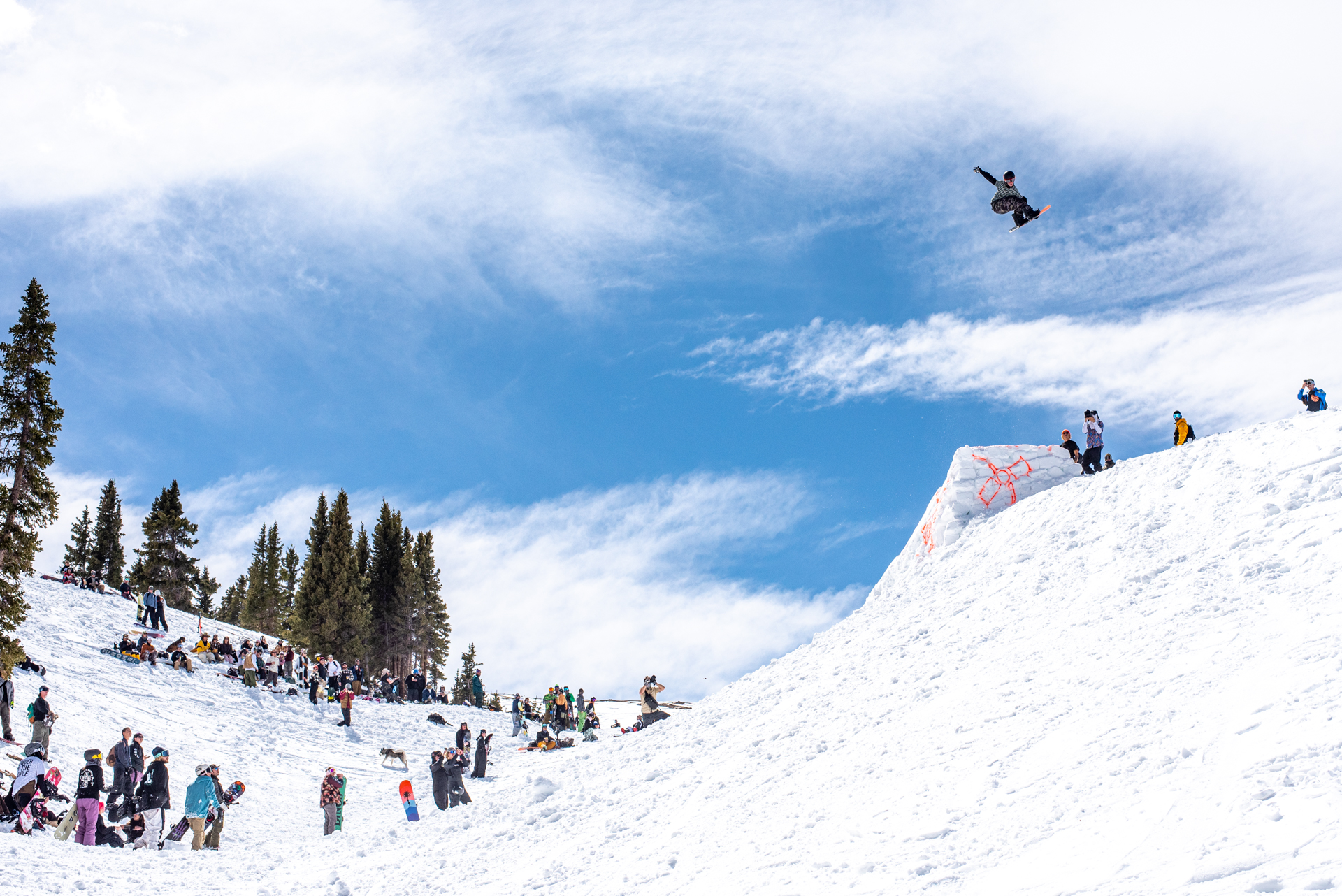 ABOVE Sixteen-year-old Evan Wrobel with the biggest air of the day. Photo: Ben Shanks Kindlon 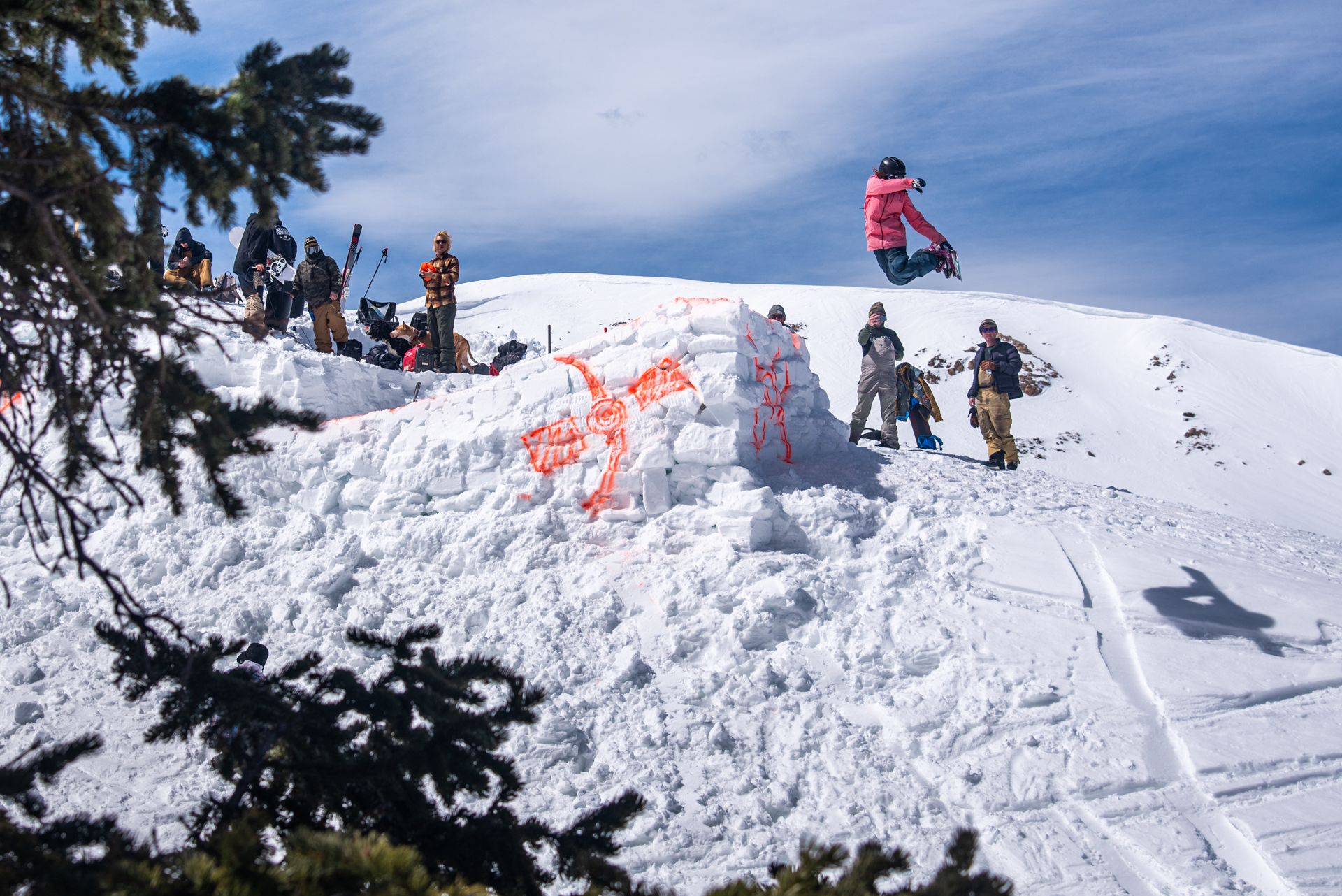 ABOVE Elin Tortorice with a proper method on the Ironing Board. The jumps, the jibs–Elin stepped to it all. Photo: Ben Shanks Kindlon

Like other late season events such as the Mt. Baker Seshup, Love Games welcomes riders of all skill levels to come rip. What’s especially unique about Love Games is the numerous features included throughout the day, some of which are certainly more inviting than others. Riders who hung back during the QP session are now crushing it on the rails and vise-versa, and so on and so forth. It’s a rad way to run such an event, because it gives a greater number of snowboarders the chance to strut their stuff and be part of things in their own special way. It also tests the versatility of snowboarders who want to ride it all, because in classic fashion, versatility reigns supreme. 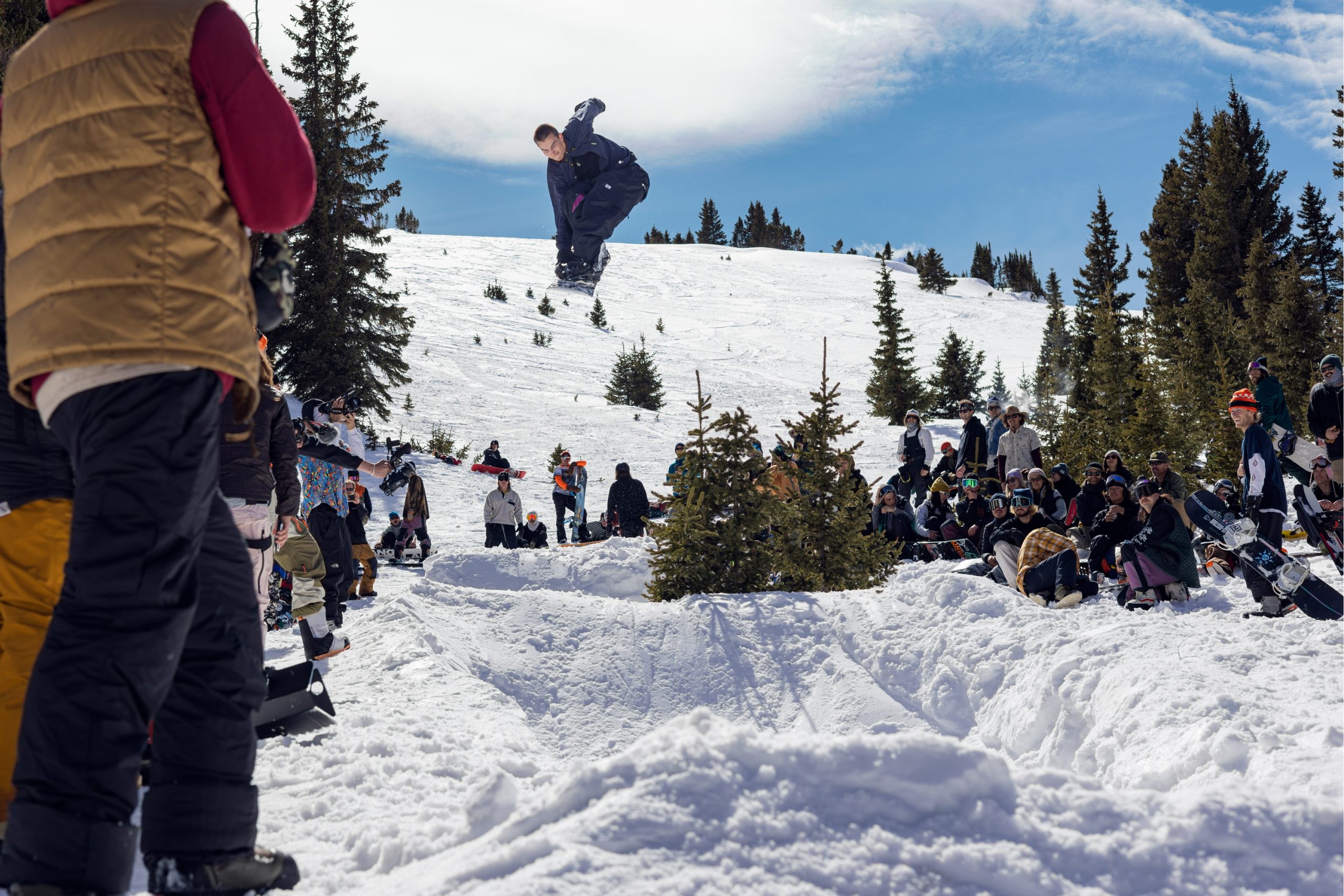 ABOVE Jack Ellis through the whoopties. Photo: Phil McKenzie 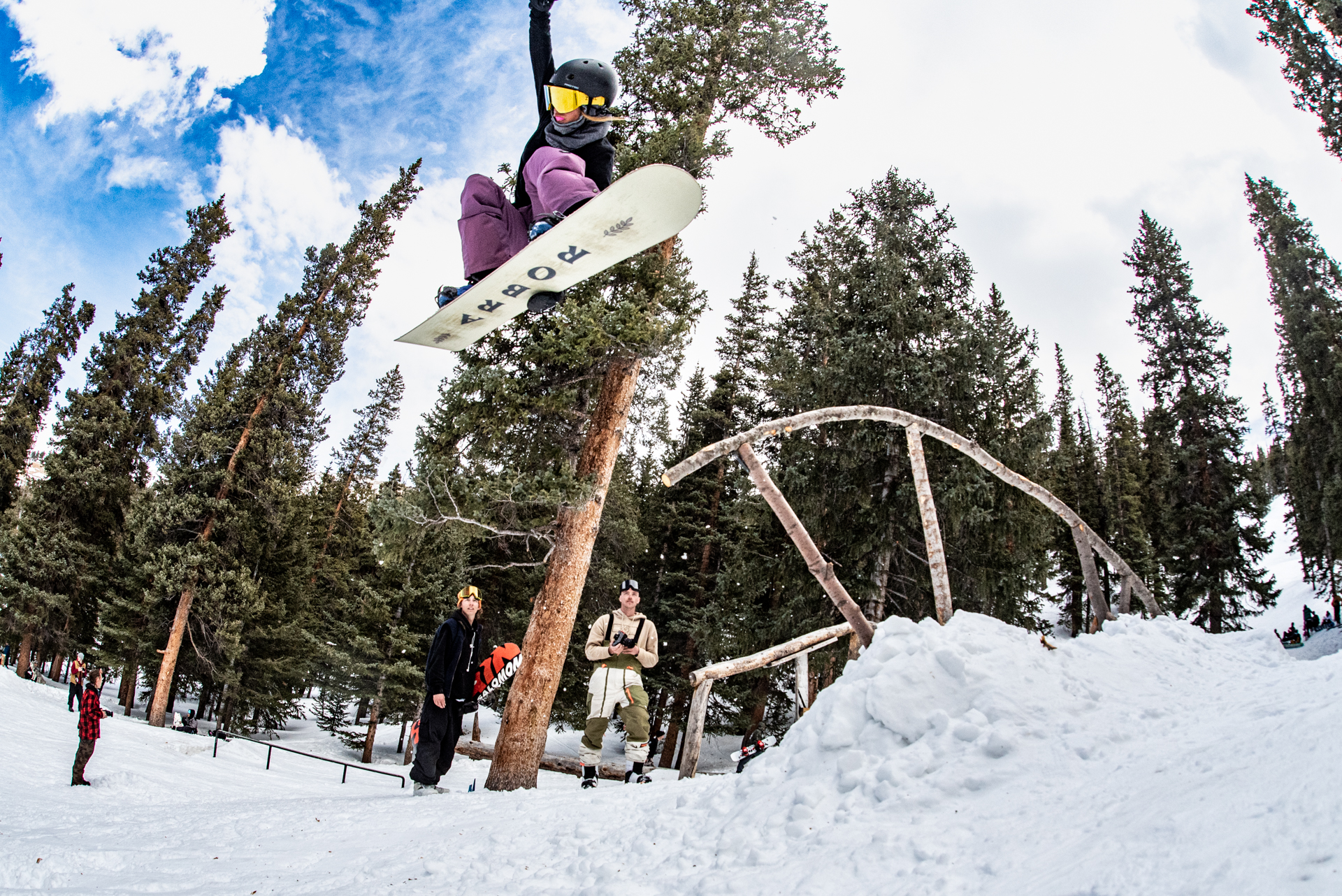 Although Loves Games is almost entirely about having a good time, building community and throwing down for the soul, judges have been keeping their eyes on certain riders throughout the day. We mosey down from the park and once again gather, this time in a parking lot back on the road, where Summer Fenton and Grant Giller are announced winners of the event for women’s and men’s divisions, respectively. Fists are bumped, hugs given, then the mass saunter of the mountain begins. After a full day under unforgiving rays, the traveling circus disbands, dehydrated, sunburnt, happy. 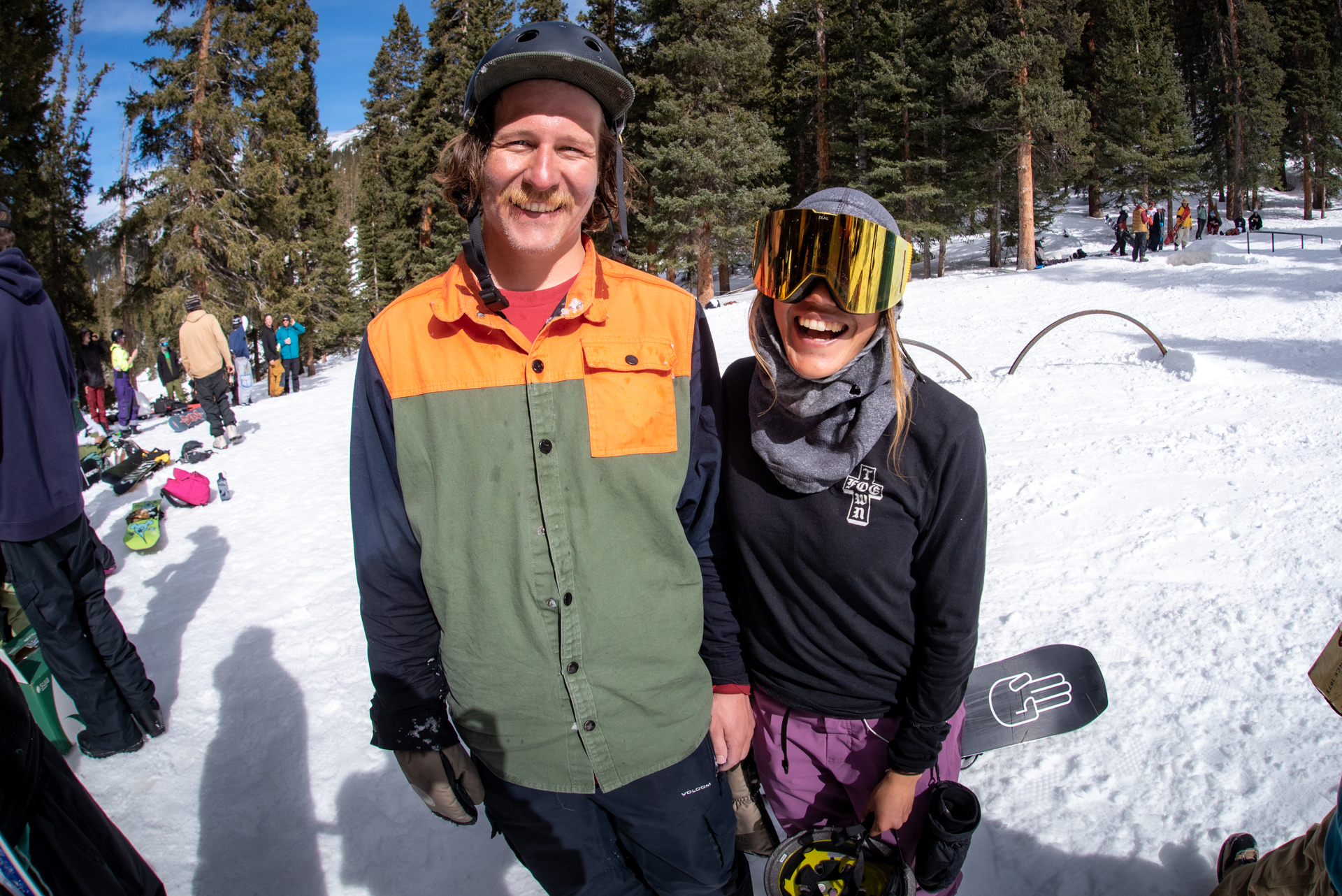