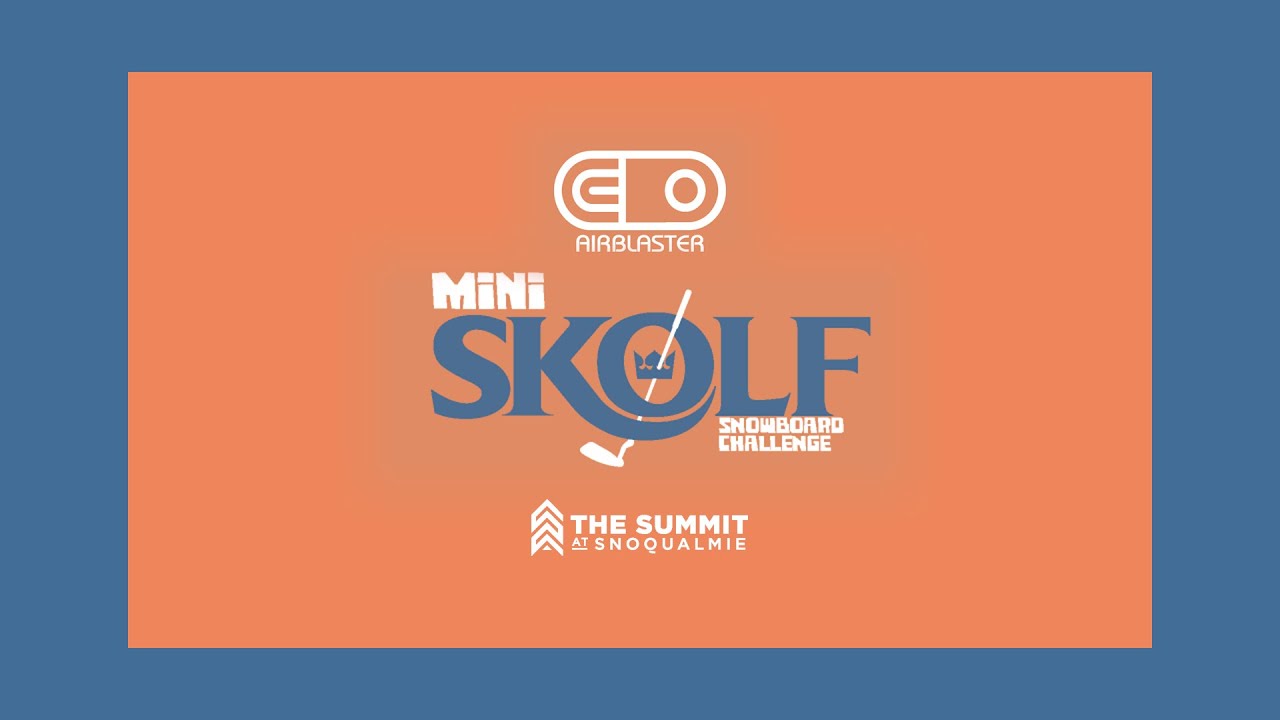 People are filling into the park shack at The Summit at Snoqualmie, WA wringing out their gloves, looking for places to hang their soaked jackets and wet goggles and it isn’t even time for the 10:30 a.m. riders’ meeting yet. Due to the torrential downpour, over 40 locals are donning rain ponchos. An invite-only competition doesn’t usually bring to mind 40-degree weather with forecasts of up to three quarters of an inch of rain, hitting golf balls with your snowboard or breaking a tie for third place by penguin sliding downhill for the furthest distance. But this isn’t your average snowboard event.

Despite the weather, it’s tee time for a round of Airblaster’s Mini SKOLF in Snoqualmie’s Central Park. SKOLF is like a bizarre game of skate and a funky mini golf course had a rowdy snowboarding baby. Riders have four tries to land the specific trick established for the “hole” (park feature) with a “par” (limit of four tries) per each feature. Like golf, the lowest score of the day wins. Max Warbington, Airblaster team member, SKOLF host and stoke-filled jib guru leads riders through the park, ensuring the course is full of wacky insanity. “We try really hard to make the features fun and approachable and then pick a trick that’s super scary and uncomfortable for everybody,” Max says. “It’s a fine line between not too dangerous, but just really awkward and funny tricks. It’s stuff that you wouldn’t try—definitely nobody’s safety trick is going to be in SKOLF. When people get together and everybody is on the same level of being scared and nervous, then you see somebody make it, then it’s just a win for the whole group.”

The original plan was to play a 6-hole Mini SKOLF game but talk of 9-holes emerged in the park shack at the start of the day. Eventually the rain influenced the final call of a 7-hole round. This is the fourth year of the SKOLF tour, a traveling competition of Mini SKOLF games for a chance at the conference round, then the two-day 18-hole finals at Timberline, OR. Jesse Grandkoski, the co-founder and general manager of Airblaster, had the initial idea to spread features out around the mountain, move as a group and use a scorecard, which has evolved into SKOLF, Max says. The competition operates on an honor system for riders counting if they got a trick or not, and to keep their own score. Although, the crowd often chimes in with loud calls of confirmation: “That’s a make.”

Riders who came out for SKOLF’s Washington debut will look back on the more-friends-on-a-rain-day mentality that consumed Central Park with a smile. “Just having it be rainy up here is so classic,” Max says. “Of course there’s going to be 40 locals here that come out and shred all day in the rain and have such a fun time. It’s like the rain doesn’t really make a difference, I’m soaked now and stoked to take my boots off, but I’m just as tired and had just as much fun if it would have been sunny.”

Thank you to Airblaster, as well as Kevin Nolan, Jeff Cragin and the crew at Summit at Snoqualmie for the creative park setup, dialed features and all the hard work that went in to make this event a great one.